Elon Musk has gone off the deep end; I reiterate my $100 year-end price target for TSLA; short pitch on Align Technology (ALGN)

1) Question: How can you tell when Elon Musk is lying?

Answer: His lips are moving!

It's not a pretty sight watching Tesla (TSLA) CEO Elon Musk implode. He's an incredible entrepreneur and visionary who has created not one but two companies that are changing the world.

But something's gone seriously wrong in his brain, causing him to become a reckless, narcissistic brat and pathological liar.

His behavior further reinforces my view that tomorrow's earnings report will be a disaster, foreshadowing Tesla's future. I have even more conviction today about the big call I made on the stock on March 4, Friday was the beginning of the end for Tesla, when it was at $295, that it would fall to $100 by the end of this year.

Musk has a long history of being wildly overoptimistic, but that's par for the course in Silicon Valley. However, starting with his notorious $420 "funding secured" tweet last August, Musk has gone off the deep end, as even Tesla cult members finally appear to be realizing.

Musk's inability to pump the stock anymore is a key reason why I think it's now a good short, after years of warning my short-selling friends not to short it.

I think Musk's meltdown can be attributed to three primary causes:

1) Hubris. He's always had a huge ego, but such incredible success, wealth, and, especially, fame/idolatry poured gasoline on that fire and turned him into an unbearable, raging narcissist.

2) Desperation. Tesla has been on the brink many times, but the pressure on Musk over the past year has been particularly intense, as he tries to hold things together amidst "production hell," demand shortfalls, widespread high-level employee defections, a cash crunch, an SEC suit, etc. I think Musk is cracking under the pressure.

It reminds me of what Warren Buffett once told me: "I don't want to know how I'd behave under duress, so I view it as one of the most important things I do to never allow myself to get into a position where I'm under duress."

3) Sleep deprivation. Musk is a manically driven person and probably hasn't ever gotten much sleep, but I suspect in the past year that whatever his old normal was has been cut in half. If you Google "effects of sleep deprivation," you'll see that Musk is exhibiting many of the classic symptoms.

I speak from experience. I usually get seven to eight hours of sleep, but in December 2017, as I was launching Kase Learning, I went 21 consecutive nights without good sleep, averaging four hours a night. It was like I was drunk – I became emotional, was overly optimistic (to the point of giddiness), and made terrible business decisions... just like Musk is doing.

4) Elon Musk claims a million Teslas will drive themselves in a year. Safety advocates have concerns, Los Angeles Times. Excerpt:

Consumer Reports put out a media statement immediately after the Musk event.

"We've heard promises of self-driving vehicles being just around the corner from Tesla before," said David Friedman, vice president of advocacy. "Claims about the company's driving automation systems and safety are not backed up by the data, and it seems today's presentations had more to do with investors than consumers' safety."

He accused Tesla of "treating the public like guinea pigs."

5) Yesterday, I had the pleasure of being one of the three judges of the stock-pitch competition that was part of the seventh annual Wharton Investment Management Alumni Reunion.

The winner we selected from the three excellent finalists was Allison Zhao. She made a strong case that Align Technology (ALGN), the manufacturer and distributor of Invisalign clear orthodontic aligners, has 50% downside. Here's her summary:

Until recently, ALGN has enjoyed 80%+ market share in the clear aligner market due to patent protections. However, beginning in October 2017, several key patents (described by ALGN's CEO as the patents that "choked most companies from getting into the marketplace" by preventing them from scaling) expired, opening the door for a huge influx of new competition.

This looks like yet another incredible business that's rapidly being disrupted by technology (especially the advent of inexpensive, small, capable 3D printers) and upstart competitors.

And the company's valuation certainly doesn't reflect any possible risks, as the stock is currently trading at 11.4x trailing revenues, 43.4x EBITDA, and 59.1x earnings.

You can read her two-page summary here and her full 14-slide presentation here.

Congratulations, Allison! Here's a picture of us: 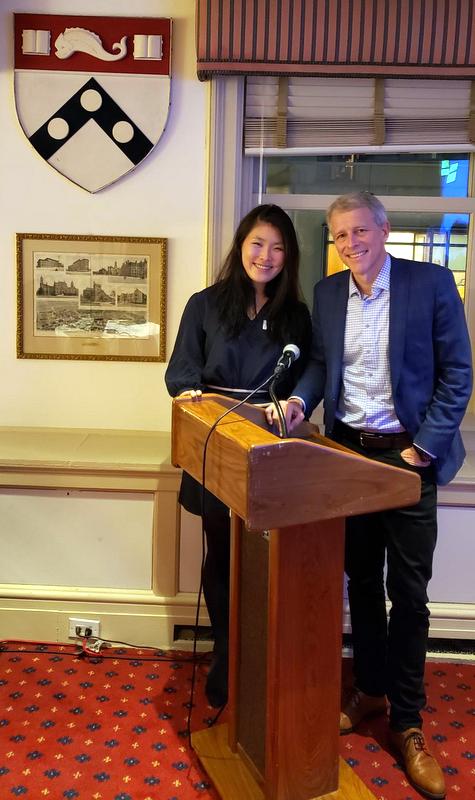