Sorry I’ve been so delinquent in keeping up with the pandemic (and this is going to be a quick one), but I’m in the middle of a 10-day RV trip from Minneapolis to Seattle with Susan – we’re in Billings, MT right now, on our way to Glacier National Park for the next two days. See the end of this email for pics…

This video should be required watching for anyone who’s not vaxxed: COVID-19 through the eyes of an unvaccinated patient

1) As I predicted in my last email, it looks like cases are flattening and hospitalizations are following, which means that deaths will soon do so as well (source): 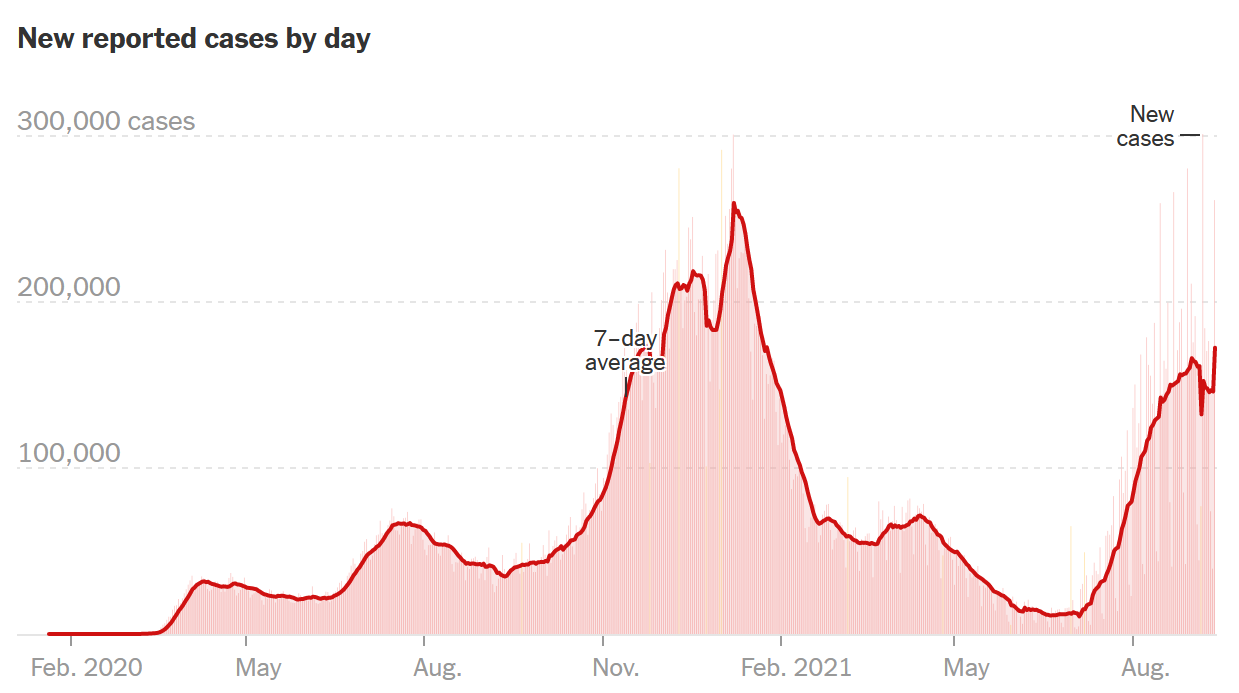 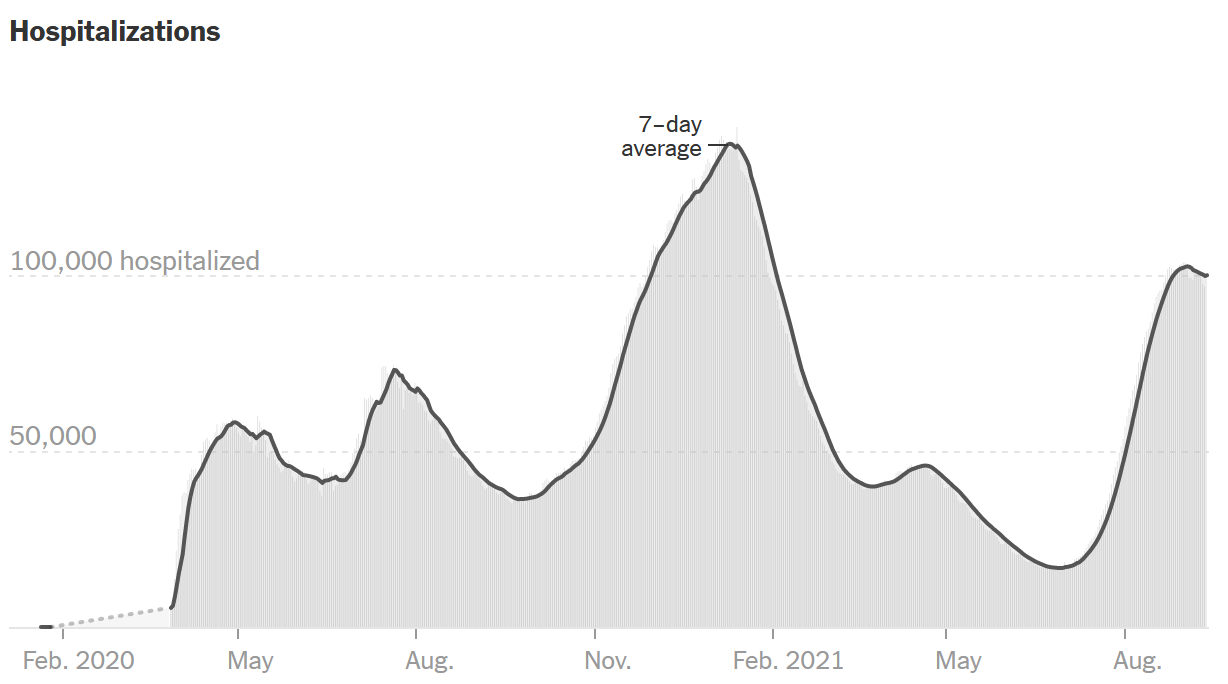 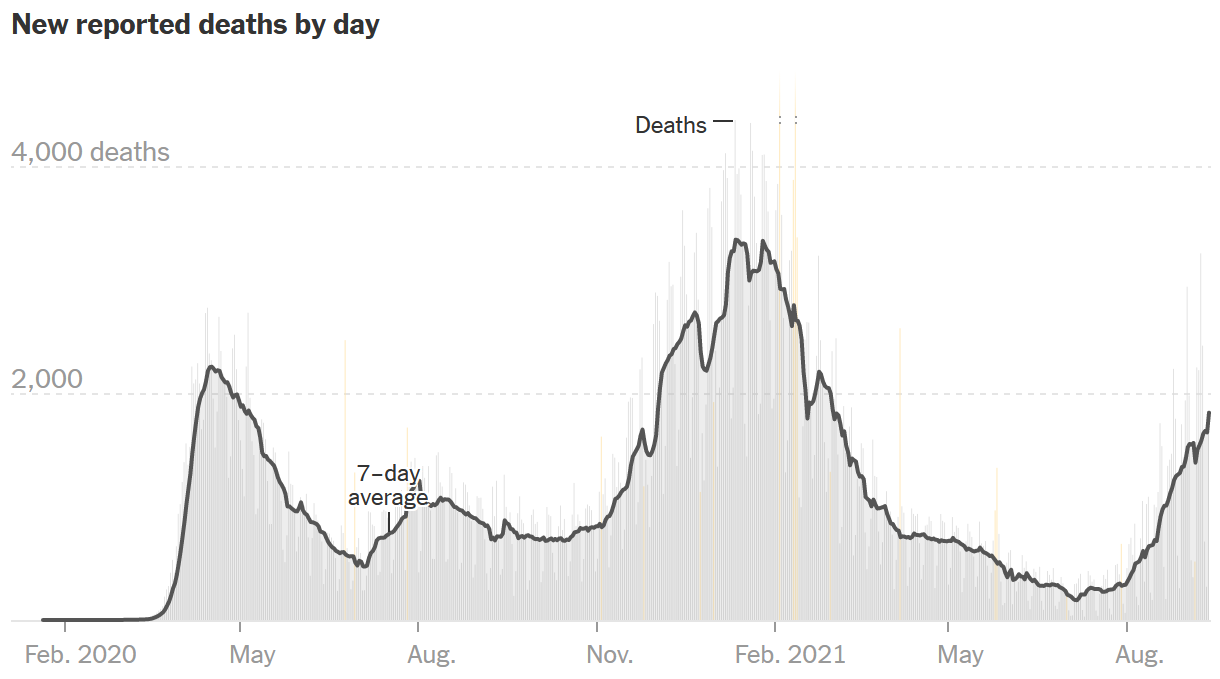 2) We should take no solace in the good news about the flattening of the 4th wave, as: a) we’re FAR from out of the woods; and b) it was largely unnecessary.

Speaking of which, here’s an analysis showing that an estimated 16,200 Americans would be alive right now if their state had the same vax rate as the #1 state (Vermont for most of the period studied): The Lives Lost to Undervaccination, in Charts.

This puts a number of the amount of blood on the hands of those who’ve cynically spread mis/disinformation and politicized the miraculous Trump vaccines.

A study by the Indiana Department of Health found similar results:

For the week of Aug. 22-29 there were 1,442 new #COVID19 admissions to the hospital. Less than 20 of those were vaccinated individuals. 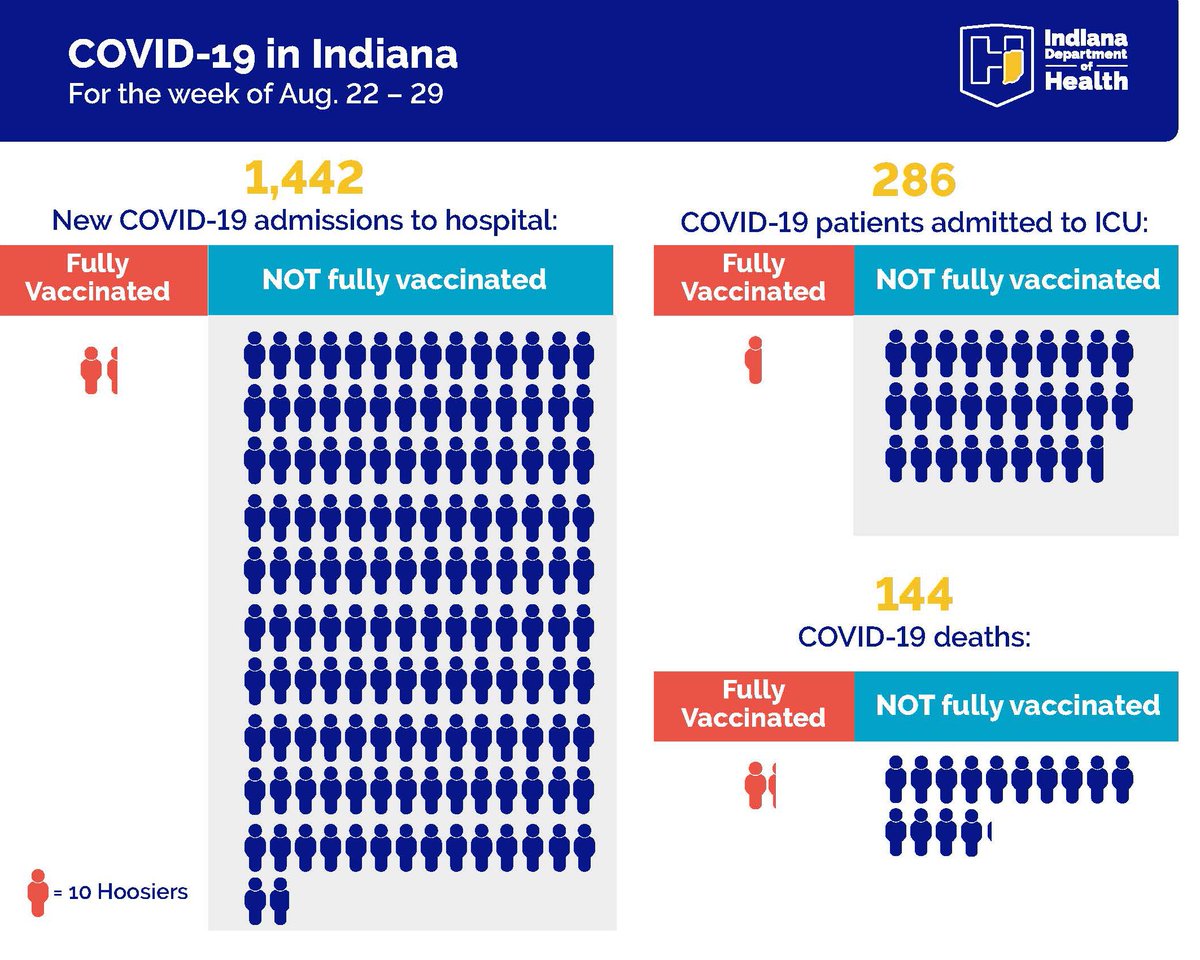 4) I continue to call them the “Trump vaccines” for two reasons: a) the Trump administration deserves a great deal of credit for their rapid development (Operation Warp Speed) and b) to try to get through to some of my Republican readers, who aren’t getting vaxxed because their party (and news networks) have politicized this issue.

I hate to be political and piss off some of my readers, but when one party and news network are spreading fear, misinformation and doubt, I have to call them out.

Some readers have emailed me to argue that the unvaxxed problem isn’t white Trump supporters, but black Americans. This is wrong on many fronts. First, while in the early stages of the vaccination campaign, there was indeed a big racial gap, that’s now gone and likely has even reversed – the data is poor, but this recent survey revealed that 76% of blacks, 71% of Latinos, but only 66% of whites said they’d been vaxxed: NBC News poll shows demographic breakdown of the vaccinated in the U.S.

More importantly, the same survey showed that 91% of Biden voters had been vaxxed vs. only 50% of Trump voters. This is consistent with the fact that the top 19 states by fully vaxxed rate went for Biden vs. 18 of 19 of the lowest went for Trump (the one exception is GA, which is 7th worst). In fact, if you simply looked at vax rates, you would correctly predict which presidential candidate 45 of the 50 states voted for… Here’s Scott Galloway with a short video rant on this: Vaccinations vs 2020 Vote

Secondly, even if a higher percentage of blacks weren’t vaxxed, they only account for 13.4% of the population vs. 72% for whites, so their total numbers would be still be small.

5) The Rep party and right-wing media are losing their collective minds over Biden’s recent vax mandates. My view: he’s not going far enough. As I’ve written before, nobody should be forced to be vaxxed – but if someone makes this (idiotic) choice, then they can’t endanger others: no public transportation, going indoors for eating, recreation or work, etc.

It turns out that we have a long history of vax resistance, going back to smallpox more than a century ago. And the Supreme Court ruled 7-2 in favor of vax requirements in 1905: How a Supreme Court decision from 1905 set the stage for vaccine mandates

What hypocrisy: G.O.P. Seethes at Biden Mandate, Even in States Requiring Other Vaccines. Excerpt:

Like other Republican governors around the country, Tate Reeves of Mississippi reacted angrily to the coronavirus vaccine mandates President Biden imposed on private businesses. Declaring the move “terrifying,” he wrote on Twitter: “This is still America, and we still believe in freedom from tyrants.”

There is a deep inconsistency in that argument. Mississippi has some of the strictest vaccine mandates in the nation, which have not drawn opposition from most of its elected officials. Not only does it require children to be vaccinated against measles, mumps and seven other diseases to attend school, but it goes a step further than most states by barring parents from claiming “religious, philosophical or conscientious” exemptions.

Resistance to vaccine mandates was once a fringe position in both parties, more the realm of misinformed celebrities than mainstream political thought. But the fury over Mr. Biden’s mandates shows how a once-extreme stance has moved to the center of the Republican Party. The governors’ opposition reflects the anger and fear about the vaccine among constituents now central to their base, while ignoring longstanding policy and legal precedent in favor of similar vaccination requirements.

6) To understand why the unvaxxed are a problem for ALL of us, see this excellent summary: Why it matters to the vaccinated if others around us remain unvaccinated

Here’s another example (from yesterday’s NYT):

‘Their crisis is becoming our problem’

Washington State has some of the strictest pandemic restrictions in the nation: Residents must wear masks when gathering indoors, and many workers are under vaccination orders.

Across the border in Idaho — where the governor has refused to require masks or vaccinations — unchecked virus transmission has pushed the state’s hospitals beyond their breaking point. Patients are now swamping facilities in Washington as well.

As Idaho patients fill wards, Washington hospitals have had to postpone surgeries to remove brain tumors. Emergency rooms are backed up as nurses struggle through brutal shifts.

“We are delaying care for people who are in misery,” said Dr. Daniel Getz, chief medical officer for Providence Sacred Heart in Spokane, Wash. “It’s agonizing for those patients. This has real impacts on these people who are waiting.”

Some leaders in the state see Idaho’s outsourcing of Covid patients as a troubling example of how the failure to aggressively confront the virus in one state can deepen a crisis in another.

“We certainly need our friends in Idaho government to do more to preserve their citizens’ health, because we know that their crisis is becoming our problem,” said Washington’s governor, Jay Inslee.

7) Inside a Florida Hospital Full of Dying, Unvaxxed Thirtysomethings. Excerpt:

After ending a 12-hour shift on Sunday, an intensive-care unit nurse at Baptist Hospital was ready to put August behind her.

The nurse, who spoke on condition of anonymity because she did not have permission from the hospital to speak to reporters, said the past month was the worst of the pandemic so far—echoing the horrific hard numbers in the state.

“The screams when we tell them their loved ones didn’t make it,” the nurse added. “We’re exhausted.”

8) Good news from a Bloomberg report:

How vulnerable are kids?

In this week's edition of the Covid Q&A, we look at the risk of Covid for kids. In hopes of making this very confusing time just a little less so, each week Bloomberg Prognosis is picking one question sent in by readers and putting it to experts in the field. This week's question comes to us from Zhirong in Melbourne, Australia. In the state of Victoria, officials have signaled plans to begin easing restrictions once 70% its residents have received at least one dose, which is likely to happen before vaccines are recommended for younger kids Zhirong asks:

I have two kids both under 12. Like many panicking parents, I am worried about my kids as they are vulnerable to the virus, but at the same time, I haven't heard many kids are in hospital due to the virus. How vulnerable are kids to Covid?

Parents of kids under 12 are right to feel anxious. For those older than that, vaccines provide good protection from infection, and even in the rare case of breakthrough infections, greatly reduce the chances of becoming seriously ill. Vaccines haven’t yet been given the green light for children under 12, and may not be for several months. That means that even as school gets under way, younger kids are without any protection. What’s more, news reports from U.S. states like Missouri and Arkansas suggest more kids with Covid are winding up in the hospital.

So how at-risk are kids for getting very ill? For some perspective, we turn to Sarah Fortune, an infectious disease expert at the Harvard T.H. Chan School of Public Health.

”In the current delta wave, we definitely are seeing kids under 12 who are getting infected,” she said. “But they are ending up in the hospital—and god forbid, dying—much less frequently than adults.”

In her home state of Massachusetts, for example, Fortune said kids under 12 make up about 13% of reported cases, but 1% of hospitalizations. This month there have so far been no reported deaths of children associated with the virus. In contrast, adults over 80 make up 2% of cases, 30% of the hospitalizations and more than 30% of deaths.

Fortune said that for her, that fact brings a measure of reassurance.

That said, with delta spreading and cases on the rise in places like the U.S., it’s crucial to also mitigate risk through other methods, like social distancing and mask wearing.

”We should not minimize the tragedy of losing even one kid to an infection that could be prevented through greater community attention to vaccination and other forms of risk mitigation and should, as communities, keep our eyes on the ball,” Fortune said.

Low risk doesn’t mean no risk, however, as these stories underscore:

9) More stories from the “karma is such a bitch” archive:

11) Other articles of interest:

Whitney, I seldom send emails to anyone outside of my business or social contacts. But I feel that I need to contact you to say thanks.

"You and I are probably on the opposite ends of the political spectrum though I consider myself a moderate conservative. My wife and I struggled for several months about the vaccination thing which is funny because I worked overseas for many years and received just about every vaccination available in the world to work there.

"We finally started the Moderna vaccines last week. Some of the credit goes to you. Your observation about President Trump pushing this along so that it was available in record time made me stop and reflect on whether I was letting my political views get in the way of my health. I still have concerns about the direction for the country and the economy but I'm confident it will work out.

"I really enjoy reading your articles each day. You and I actually share many values the same about work and family. I thank you again for always making me stop and think. 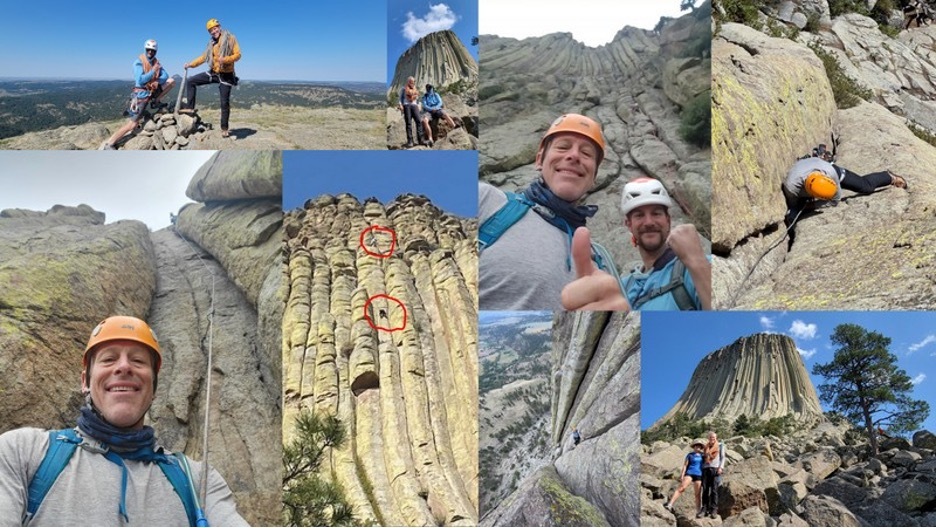