1) The surge in coronavirus cases in the FACT states (FL, AZ, CA, TX) is getting a ton of press, but less well covered is the fact that: a) deaths – a far more important metric – remain very low; and b) all but CA appear to be already past their peaks.

Re. a), check out these two charts to put the FACT deaths into the context of how much worse it was in NY/NJ/CT earlier this year: 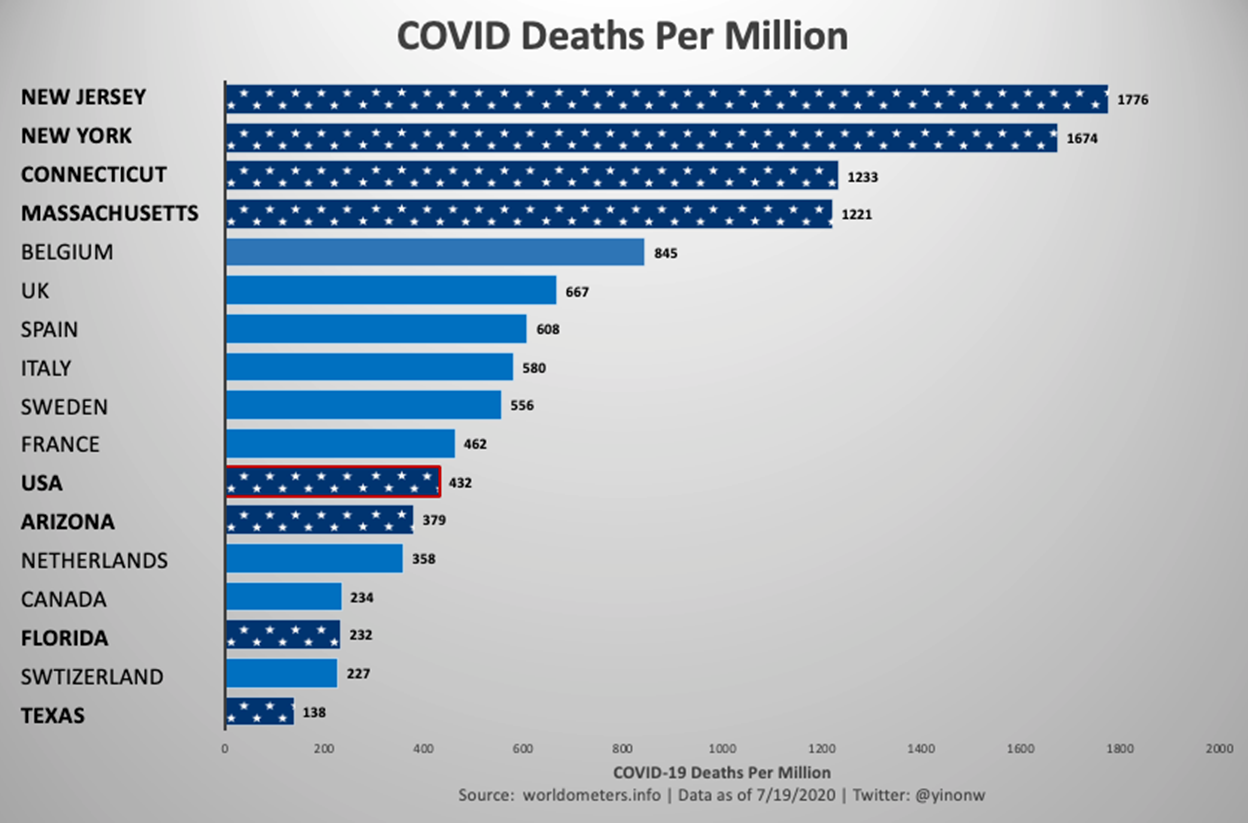 2) To see why we may be past the peak, let’s first take a look at Florida (all charts are from this excellent site, which has 41 tabs/charts).

This chart shows that, after a huge run-up, the 7-day average number of cases (red line) has declined the past two days and was flat the three days before that: 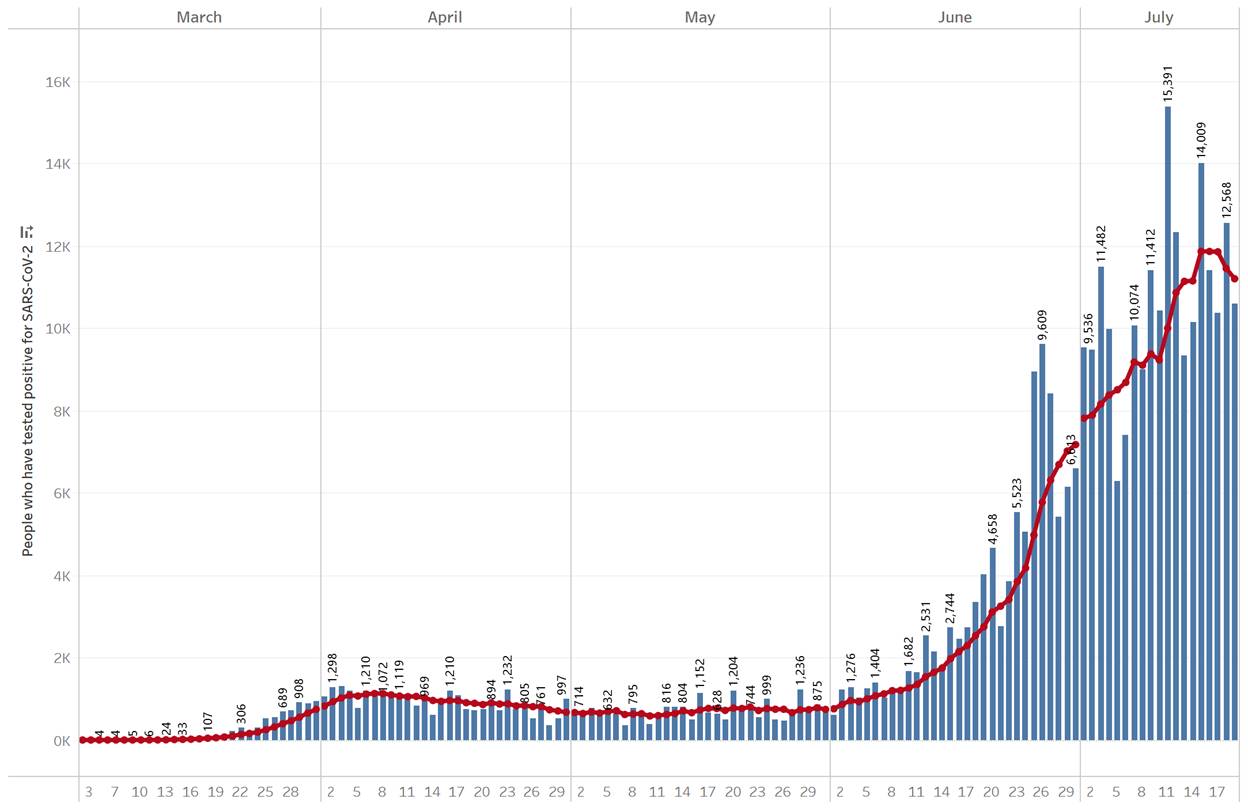 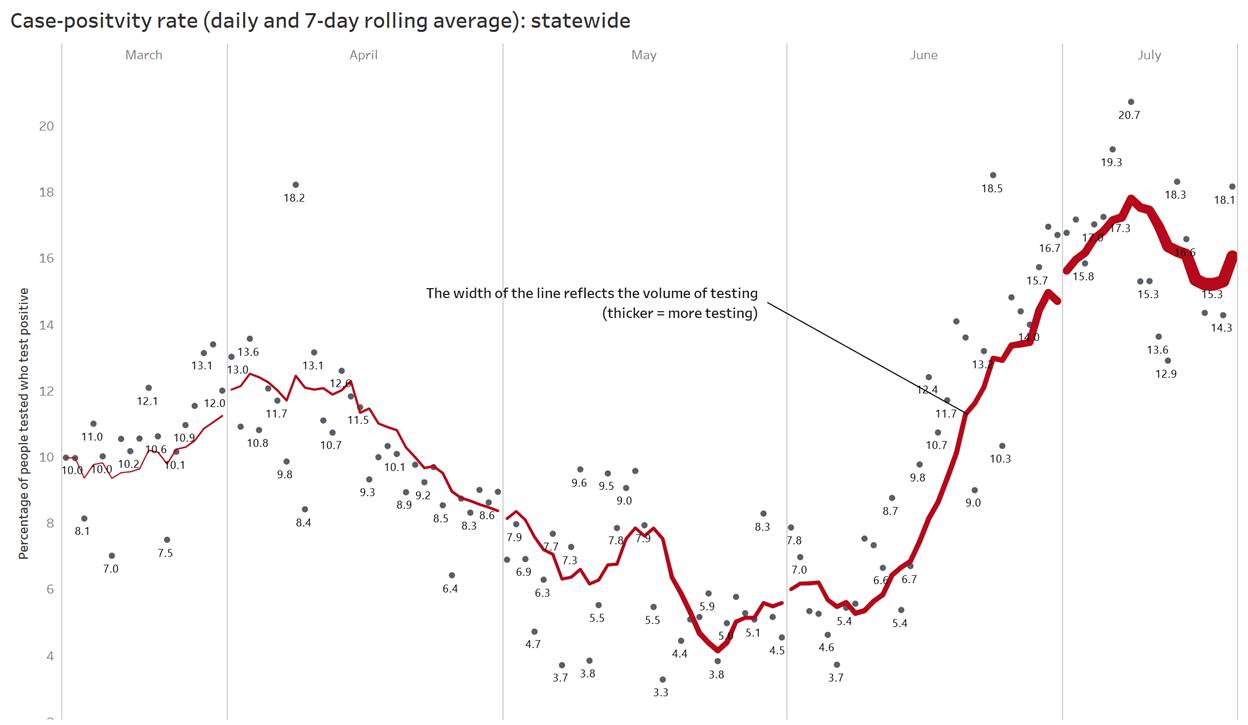 While positive cases are increasingly among the young, only the very old (average age: 80) are dying:

Per my earlier email about the difference between the date a death is reported vs. the date the death occurred, here are these two charts for Florida (note the alarming rising trend in the first chart, which is completely incorrect):

This is the revised chart, based on the day the person died (note the declining trend; also note, however, the delay in reporting, so recent days should be ignored): 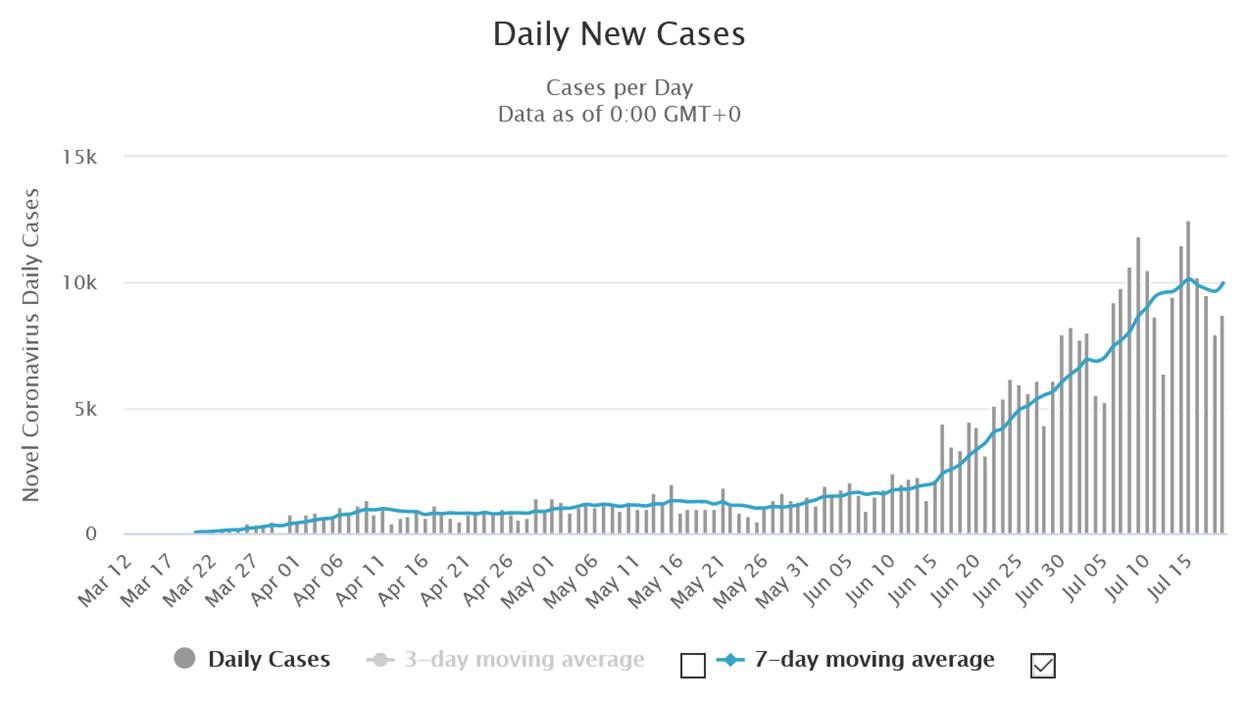 Not sure what the death trend is yet: 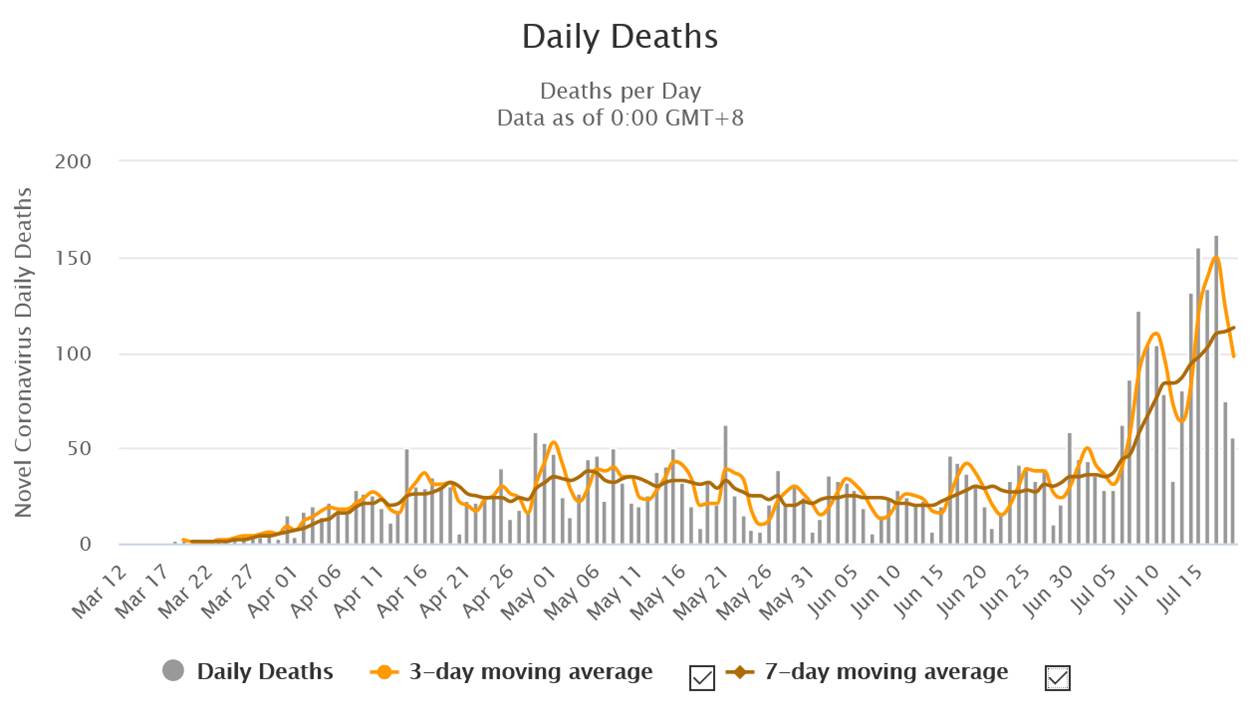 In Houston, hospitalizations are declining: 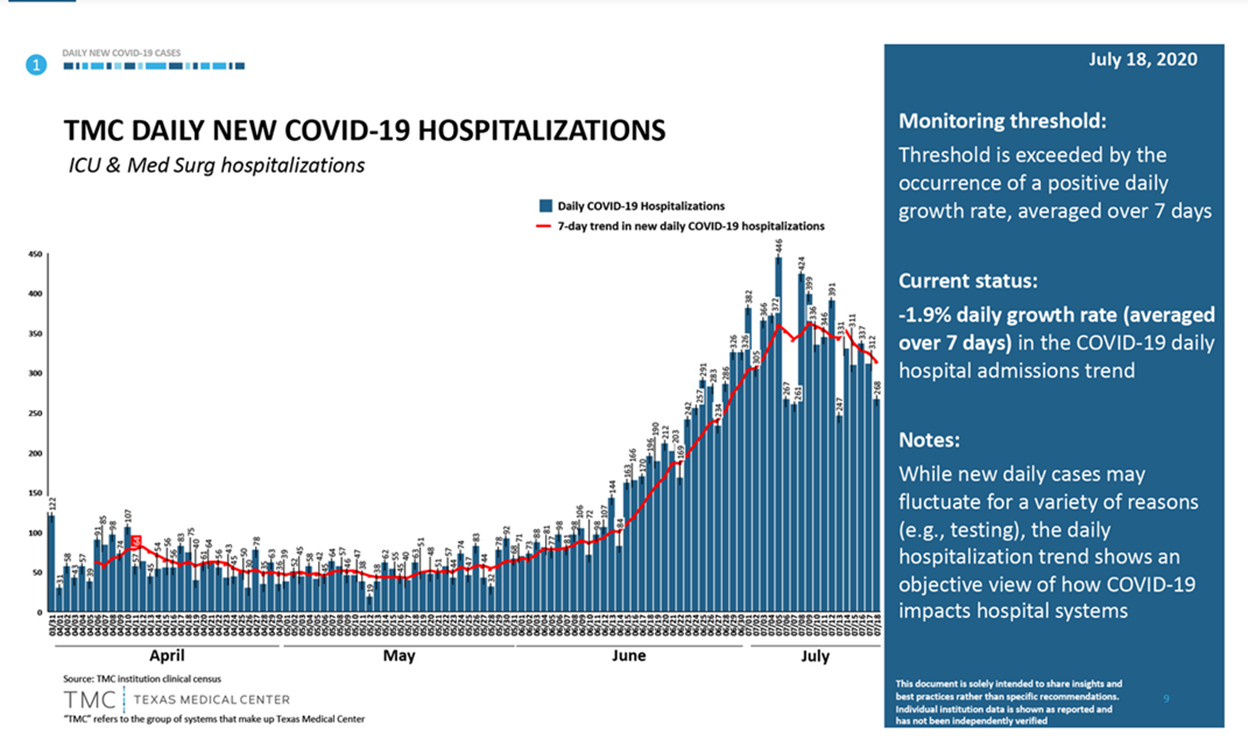 4) Here are charts for Arizona: 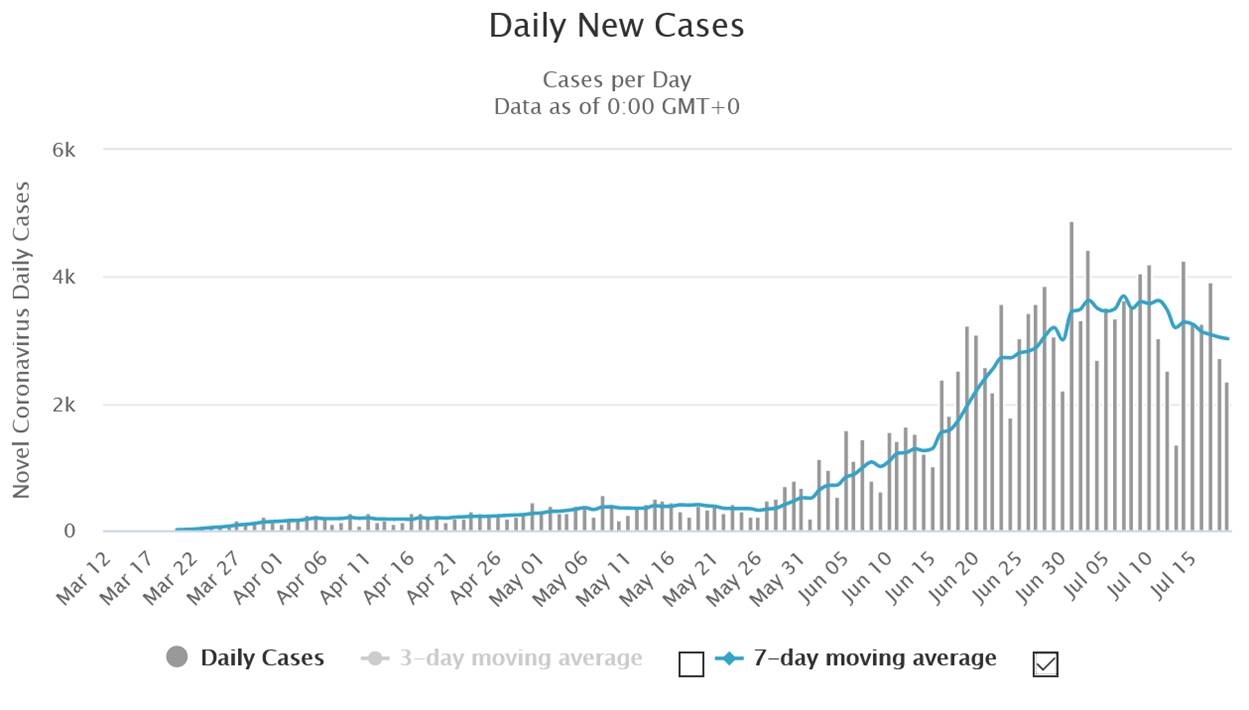 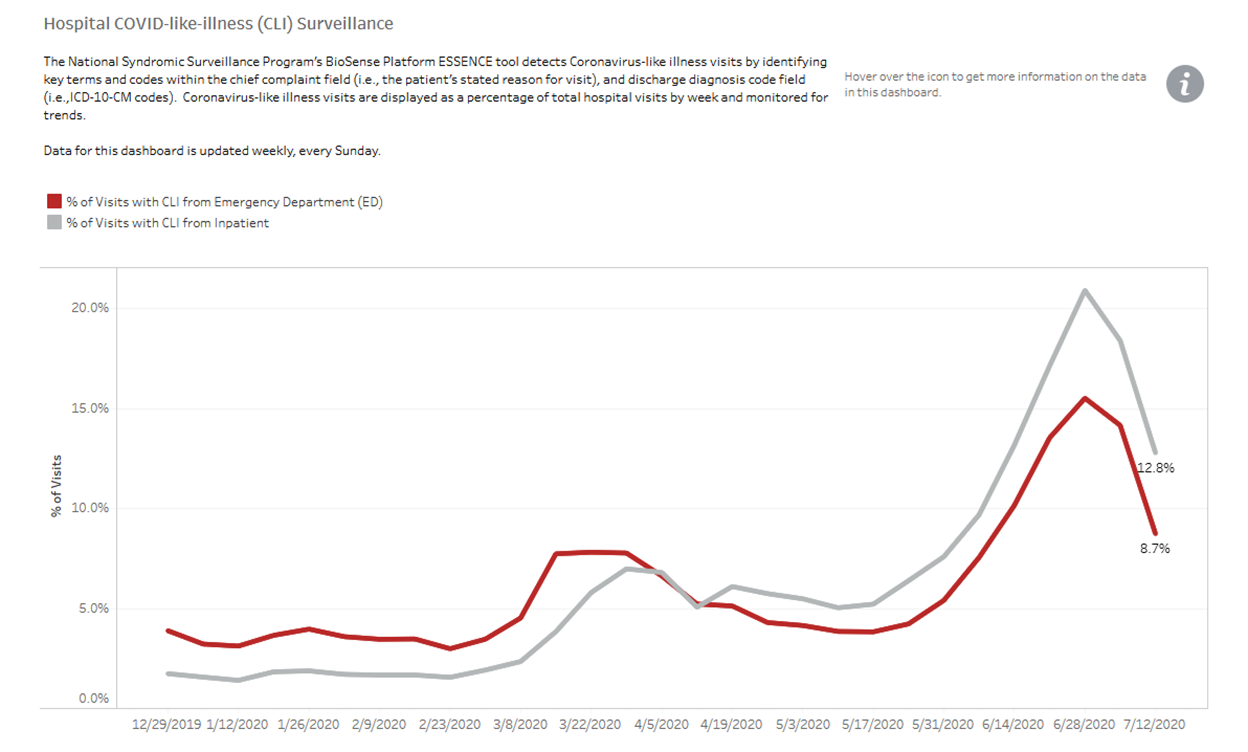 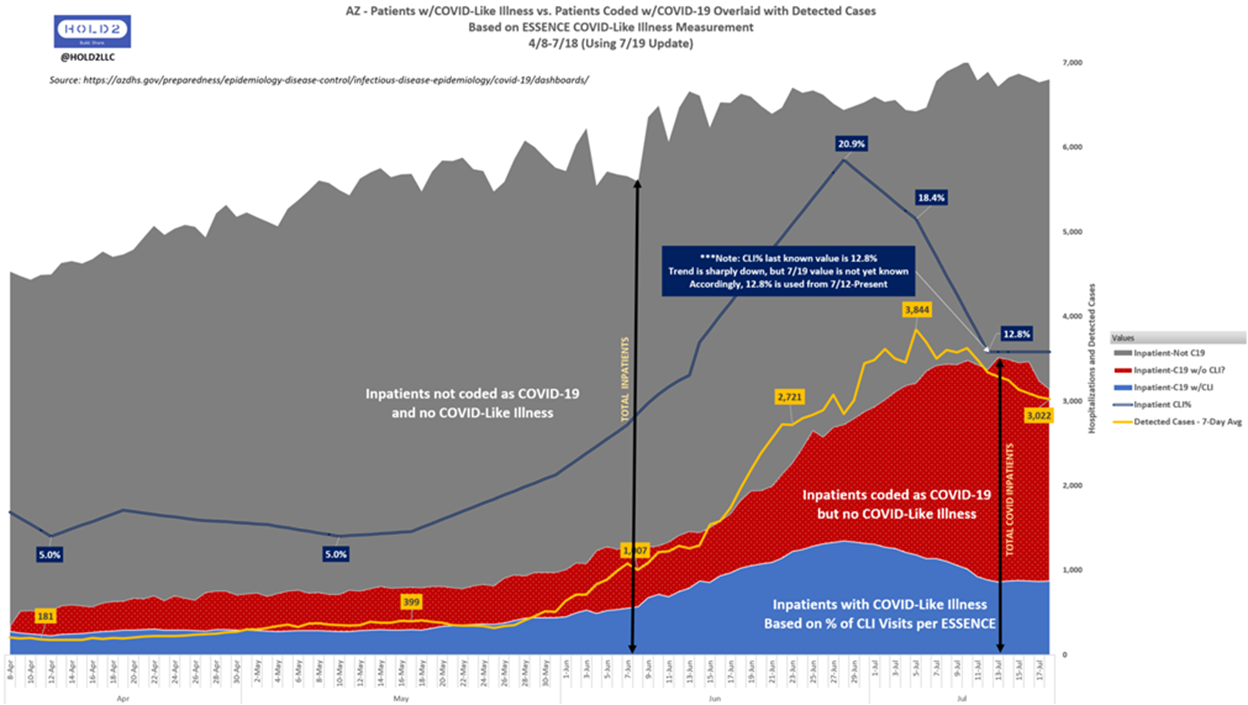 Deaths (a lagging metric) are not yet in decline: 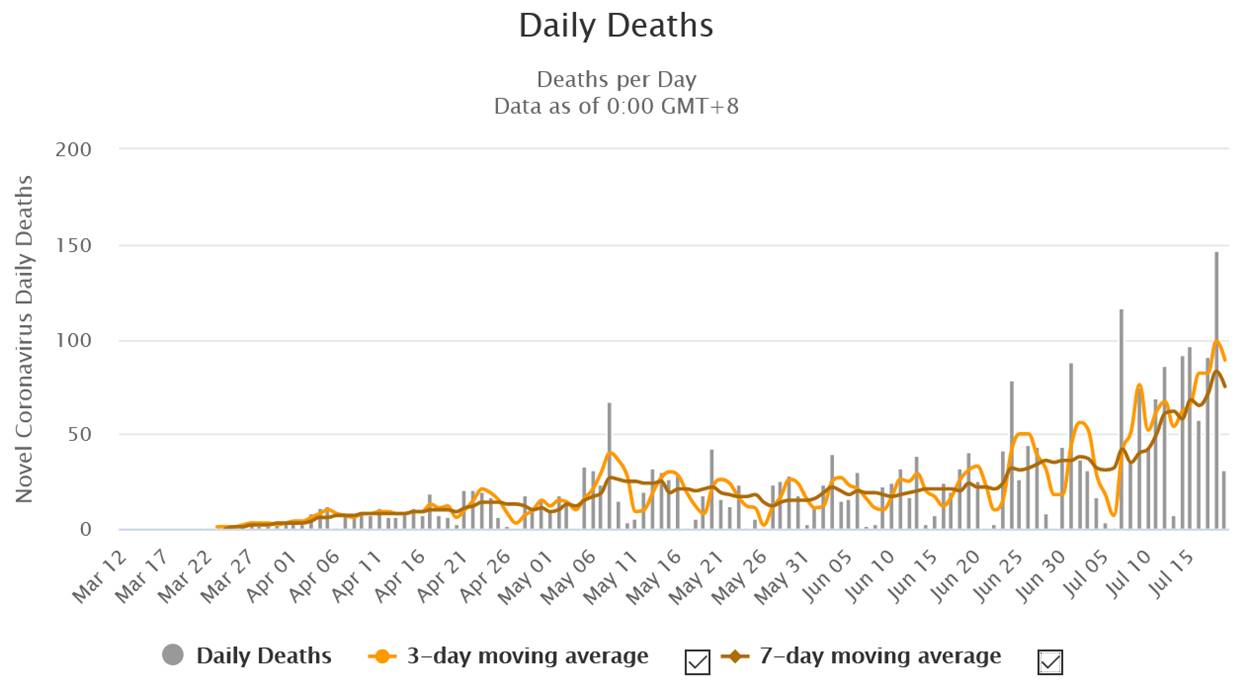 5) Last but not least, California, where it’s too early to say that it’s likely past its peak. Here are daily new cases: 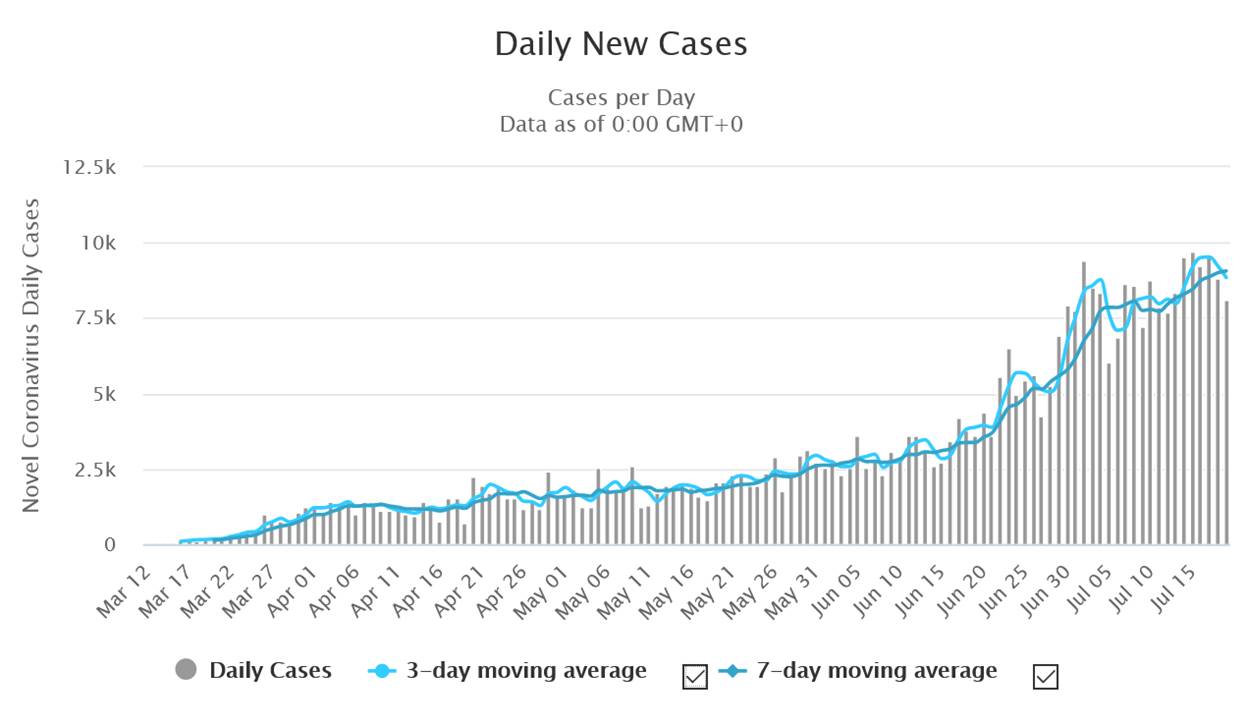 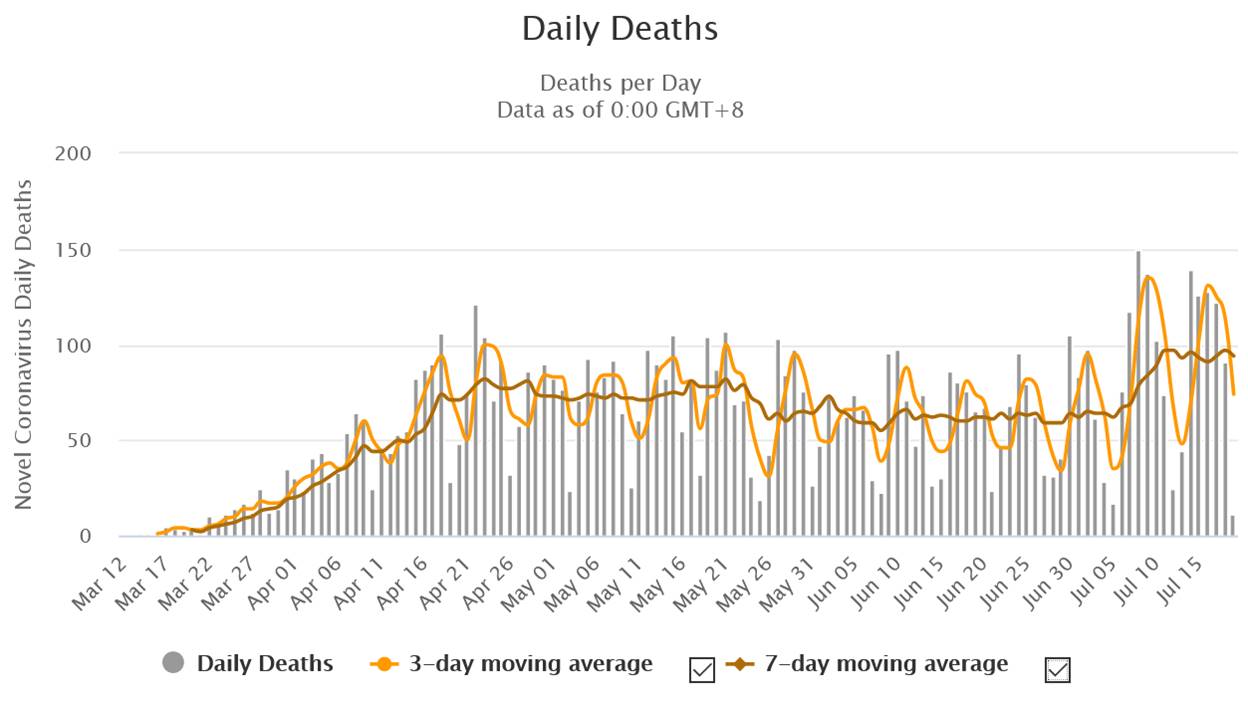 6) Some very good answers to common questions: The Best Science-Backed Tips for Living During COVID-19. Excerpt:

Today, in the midst of a global pandemic, we face an unprecedented level of risk and uncertainty in our daily lives — with very little reliable information to guide us. Our political leaders have been at best inconsistent, and at worst flat-out wrong, when it comes to communicating how to protect ourselves and each other.

As is often the case, small things can make a huge difference. Just as you wouldn’t drive your car without your seat belt or go skydiving without a parachute, you should wash your hands and wear a mask whenever you go out. But even if we take such precautions, we face some risk of COVID-19 every time we leave our homes. The question to ask is: How large is that risk, and is it worth it? To help make sense of all the confusing and often contradictory advice, I consulted more than a dozen doctors and scientists and tried to sort out the most logical, rational, simple advice science could offer to just about every question imaginable.

From what I hear, the virus is mainly fatal for older people and for those who have underlying medical conditions. If I’m a healthy adult, is my risk of dying from it low?

7) Regarding Trump’s claim (in his interview with Fox News’ Chris Wallace, which aired yesterday) that “we have one of the lowest mortality rates in the world,” we in fact have one of the highest, as this chart shows: 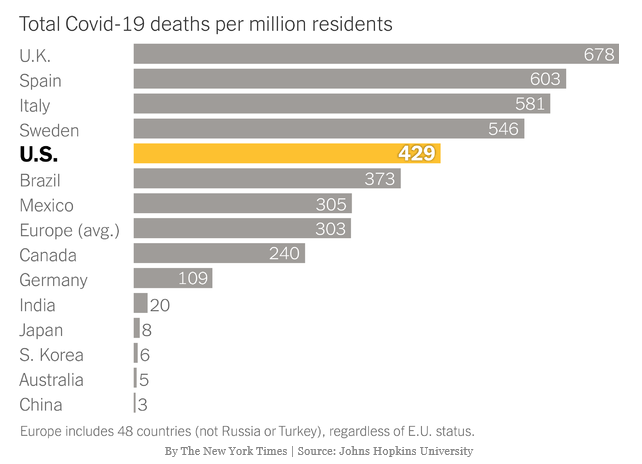 8) Here’s an in-depth article about how most European countries bungled the response to the virus: Europe Said It Was Pandemic-Ready. Pride Was Its Downfall. Excerpt:

Instead of serving primarily as a donor, providing aid to former colonies, Western Europe became an epicenter of the pandemic. Officials once boastful about their preparedness were frantically trying to secure protective gear and materials for tests, as death rates soared in Britain, France, Spain, Italy and Belgium.

This was not supposed to happen. The expertise and resources of Western Europe were expected to provide the antidote to viral outbreaks flowing out of poorer regions. Many European leaders felt so secure after the last pandemic — the 2009 swine flu — that they scaled back stockpiles of equipment and faulted medical experts for overreacting.

But that confidence would prove their undoing. Their pandemic plans were built on a litany of miscalculations and false assumptions. European leaders boasted of the superiority of their world-class health systems but had weakened them with a decade of cutbacks. When Covid-19 arrived, those systems were unable to test widely enough to see the peak coming — or to guarantee the safety of health care workers after it hit.

Accountability mechanisms proved toothless. Thousands of pages of national pandemic planning turned out to be little more than exercises in bureaucratic busy work. Officials in some countries barely consulted their plans; in other countries, leaders ignored warnings about how quickly a virus could spread.

European Union checks of each country’s readiness had become rituals of self-congratulation. Mathematical models used to predict pandemic spreads — and to shape government policy — fed a false sense of security.

National stockpiles of medical supplies were revealed to exist mostly on paper, consisting in large part of “just in time” contracts with manufacturers in China. European planners overlooked the risk that a pandemic, by its global nature, could disrupt those supply chains. National wealth was powerless against worldwide shortages.

Sir David King, a former British chief science officer, said, “The word ‘arrogance’ comes to mind, I am afraid.” He added: “What hubris.”

9) And another in-depth look (with the usual trigger warning to Trump fans), this one by James Fallows in The Atlantic, at how badly Trump and his administration have bungled the response to the pandemic, using an analogy to airline safety: The 3 Weeks That Changed Everything. Excerpt:

In these two fundamentally similar undertakings—managing the skies, containing disease outbreaks—the United States has set a global example of success in one and of failure in the other. It has among the fewest aviation-related fatalities in the world, despite having the largest number of flights. But with respect to the coronavirus pandemic, it has suffered by far the largest number of fatalities, about one-quarter of the global total, despite having less than one-20th of the world’s population.

Consider a thought experiment: What if the NTSB were brought in to look at the Trump administration’s handling of the pandemic? What would its investigation conclude? I’ll jump to the answer before laying out the background: This was a journey straight into a mountainside, with countless missed opportunities to turn away. A system was in place to save lives and contain disaster. The people in charge of the system could not be bothered to avoid the doomed course.

The organization below differs from that of a standard NTSB report, but it covers the key points. Timelines of aviation disasters typically start long before the passengers or even the flight crew knew anything was wrong, with problems in the design of the airplane, the procedures of the maintenance crew, the route, or the conditions into which the captain decided to fly. In the worst cases, those decisions doomed the flight even before it took off. My focus here is similarly on conditions and decisions that may have doomed the country even before the first COVID-19 death had been recorded on U.S. soil.

What happened once the disease began spreading in this country was a federal disaster in its own right: Katrina on a national scale, Chernobyl minus the radiation. It involved the failure to test; the failure to trace; the shortage of equipment; the dismissal of masks; the silencing or sidelining of professional scientists; the stream of conflicting, misleading, callous, and recklessly ignorant statements by those who did speak on the national government’s behalf. As late as February 26, Donald Trump notoriously said of the infection rate, “You have 15 people, and the 15 within a couple of days is going to be down close to zero.” What happened after that—when those 15 cases became 15,000, and then more than 2 million, en route to a total no one can foretell—will be a central part of the history of our times.

But what happened in the two months before Trump’s statement, when the United States still had a chance of containing the disease where it started or at least buffering its effects, is if anything worse.