1) Two explosive reports out in the last couple of days. The first, in the NYT, explores the CDC’s many failures – so damning! The C.D.C. Waited ‘Its Entire Existence for This Moment.’ What Went Wrong?. Excerpt:

As the number of suspected cases — and deaths — mounted, the C.D.C. struggled to record them accurately. The agency rushed to hire extra workers to process incoming emails from hospitals. Still, many officials turned to Johns Hopkins University, which became the primary source for up-to-date counts. Even the White House cited its numbers instead of the C.D.C.’s lagging tallies.

Some staff members were mortified when a Seattle teenager managed to compile coronavirus data faster than the agency itself, creating a website that attracted millions of daily visitors. “If a high schooler can do it, someone at C.D.C. should be able to do it,” said one longtime employee.

For years, federal and state governments have not invested enough money to insure that the nation’s public health system would have critical data needed to respond in a pandemic. Since 2010, for example, grants to help hospitals and states prepare for emergencies have declined.

In 2019, more than 100 public health groups pressed congressional leaders to allocate $1 billion over a decade to upgrade the infrastructure. The C.D.C. received $50 million toward the effort this year. Then, as coronavirus cases and deaths mounted in March, the federal government committed to $500 million under the emergency CARES Act.

“The crisis has highlighted the need to continue efforts to modernize the public health data systems that C.D.C. and states rely on,” Dr. Redfield told a Senate committee on May 12. “Timely and accurate data are essential as C.D.C. and the nation work to understand the impact of Covid-19 on all Americans.”

Dr. Redfield clearly seems to be the wrong man for the job…

2) This article in the Washington Post shows how our nation’s response to the coronavirus was far better in white communities, even though black communities were being hit far harder: Few testing sites, thousands of virus deaths: How the U.S. failed black communities. Excerpt:

Interviews with nearly 60 public health experts, lawmakers and community leaders show that many of the first coronavirus testing sites went up in areas that happened to be whiter and more affluent, despite the requests of black leaders. Local governments — sometimes ignoring the pleas of community activists — targeted few of their education campaigns about prevention and social distancing specifically to African Americans, even as conspiracy theories spread that black people were immune to the disease.

Poor reporting of data, which initially masked the fact that the disease was disproportionately affecting black communities, remains a problem even as states move to reopen their economies.

Today, Americans living in counties with above-average black populations are three times as likely to die of the coronavirus as those in above-average white counties, according to an analysis of census and other data by The Washington Post.

Frustration over the lives lost during the pandemic, as well as the economic devastation it has caused, in black communities is helping to fuel unrest around the nation as protesters demonstrate against police brutality.

“People have been asking and asking for our leaders to pay attention to their struggles,” said Roland Walker, a pediatrician and health commissioner in Gary, Ind. “You can only tell people, ‘It’s a process’ and, ‘It’s going to take time,’ so many times before people start thinking there needs to be a drastic change.”

3) Scott Gottlieb with more evidence that, while we’re not losing the war against the coronavirus, we’re not exactly winning it either: 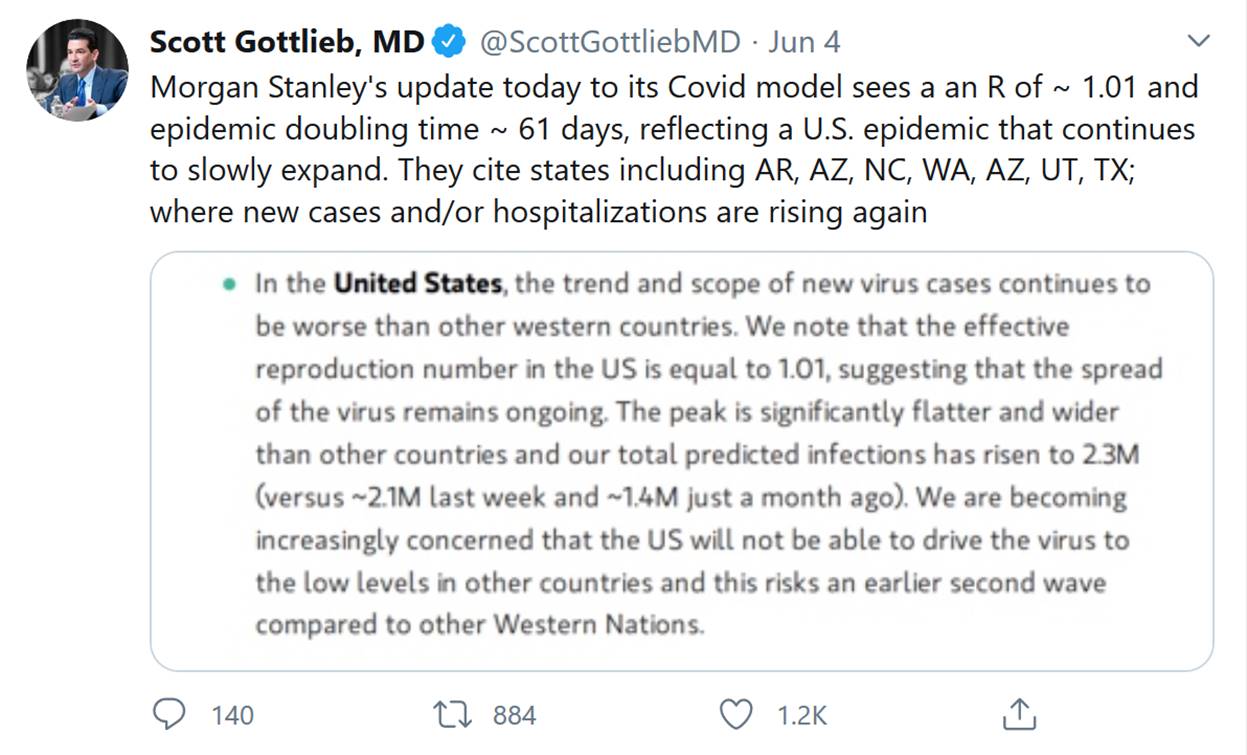 To be clear: the overall trend in cases, hospitalizations, and deaths is downward, but: a) it’s nowhere near the plunge that other, peer countries are seeing; and b) it’s mostly being driven by huge declines in a few states like NY and NJ.

4) Across the country, it’s a mixed bag, as you can see on the NYT’s website here, Coronavirus in the U.S.: Latest Map and Case Count, which is regularly updated. As of right now, it shows rising cases in the last two weeks in 18 states plus Puerto Rico, flat in 17 states plus Guam, and declines in 15 states plus DC. 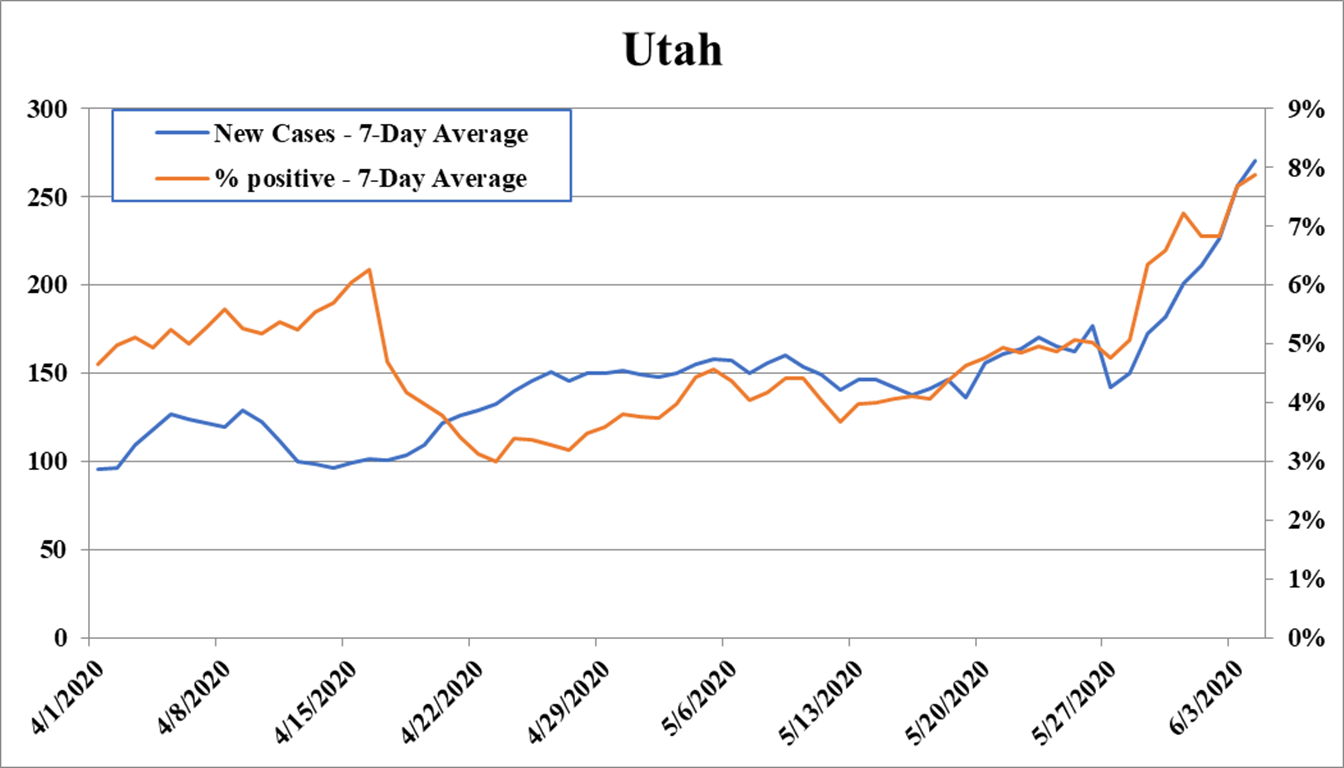 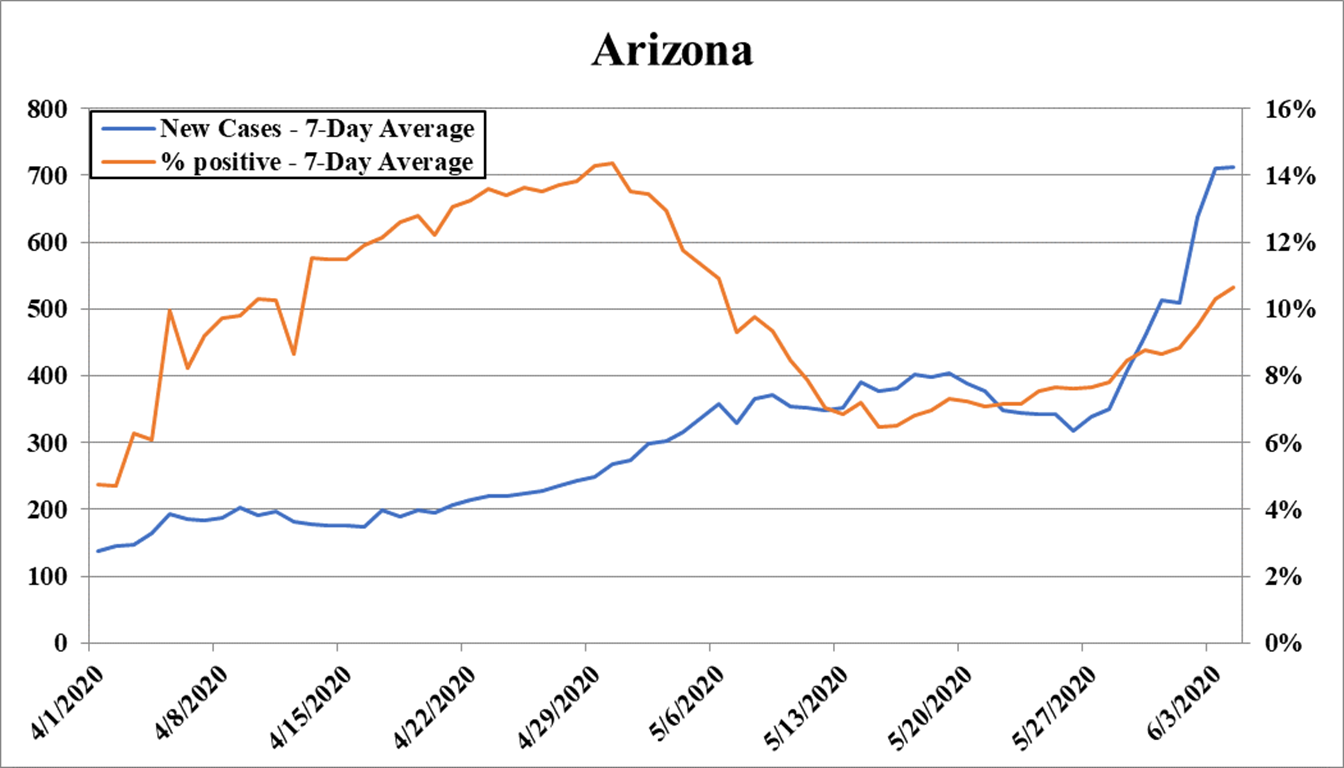 The CDC ranks the top nine counties and one independent city with rising infection levels. Most of those counties are either in the Midwest or the Southeast, where mostly Republican governors have been quick to reopen their states.

The 18-page document, titled “CDC COVID-19 Response Update May 27, 2020,” contains state-by-state analysis, as well as more detailed county breakdowns. The report comes as the nation enters its fourth full month of battling the disease, which has sickened nearly 2 million Americans and killed 108,000. 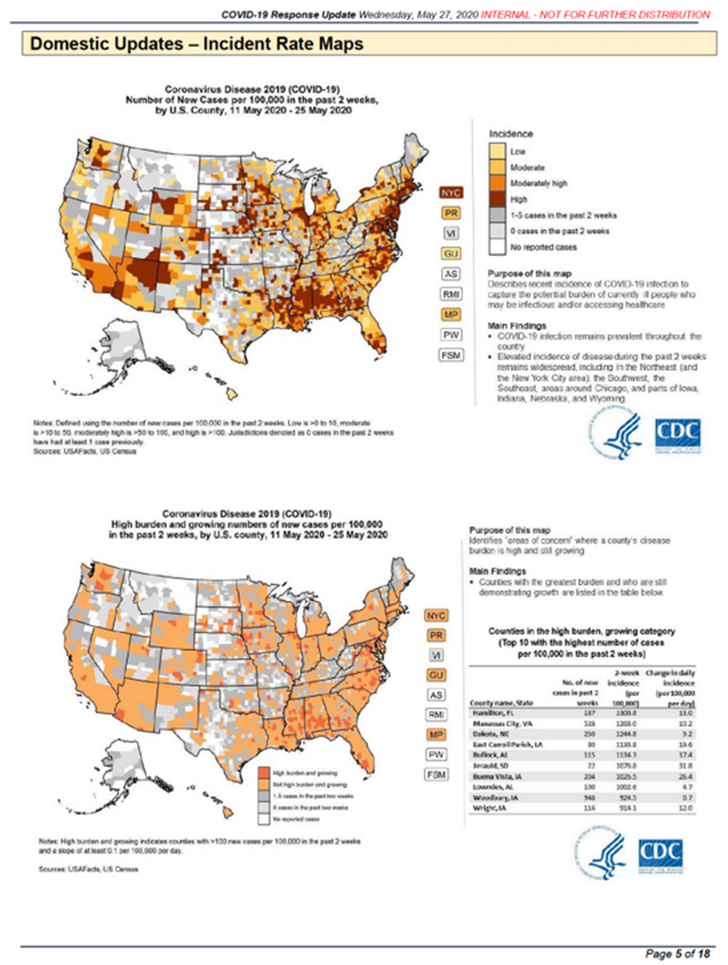 The Trump administration promised a “whole-of-government” response to battle the virus, but that has also meant no single agency is responsible for providing statistical updates on progress against the disease. Some governors have criticized Trump for leaving too much to the states, accusing him of abdicating the president’s responsibility to lead.

The CDC’s areas of concern, described as those counties “with the greatest burden who are still demonstrating growth,” are listed according to the number of new cases per 100,000 individuals over the past two weeks, which in this case were the last two weeks of May. In descending order, those are: Hamilton County, Fla.; City of Manassas, Va.; Dakota County, Neb.; East Carroll Parish, La.; Bullock County, Ala.; Jerauld County, S.D.; Buena Vista County, Iowa; Lowndes County, Ala.; Woodbury County, Iowa; Wright County, Iowa.

7) What may be more concerning is that many states are nearing capacity on ICU beds:

And Rising ICU bed use ‘a big red flag’. Excerpt:

“Our greatest fear about not being able to blunt the peak of illness, not being able to flatten the curve, is that … people will be exposed to the virus, become ill and potentially die because too many people became sick too quickly and it overwhelmed the health care system,” Biddinger tells POLITICO.

Minnesota’s most populous counties, Hennepin and Ramsey — where Minneapolis and St. Paul are located — are each projected to have a shortage of dozens of ICU beds in the next three weeks, according to the health care intelligence firm Leavitt Partners, which is led by President George W. Bush’s former Health and Human Services Secretary Mike Leavitt. Ramsey County is also at risk of exceeding its hospital bed capacity, meaning hospitals there would have no additional space to convert for ICU patients.

8) In a thoughtful opinion piece, Dr. Rajaie Batniji brings up important concerns about why we are reopening too quickly. Optimism, not evidence, is driving America’s return-to-work strategy. Excerpt:

Temperature screening provides false assurance to employees entering the workplace. One recent study showed that about 70% of patients sick enough to be hospitalized for Covid-19 did not have fevers. Coupled with the fact that most people infected with the coronavirus do not have symptoms, screening for temperatures will miss at least 86% of infected individuals, and likely miss an even higher percentage.

A “barrier” that allows nearly 9 in 10 infected individuals to enter a workplace or business is not one that should be used to provide reassurance to employees.

If we use the optimistic scenario and rely on expanded symptom screening done daily, this approach identifies only about half of infected individuals, though likely only several days after they became contagious, allowing for workplace spread in the interim. More realistically, based on recent data outside of nursing homes, symptom-tracking will miss upwards of 80% of infections.

This approach is compounded by the risk of underreporting symptoms, especially when employees are not paid when they are cannot come to work.