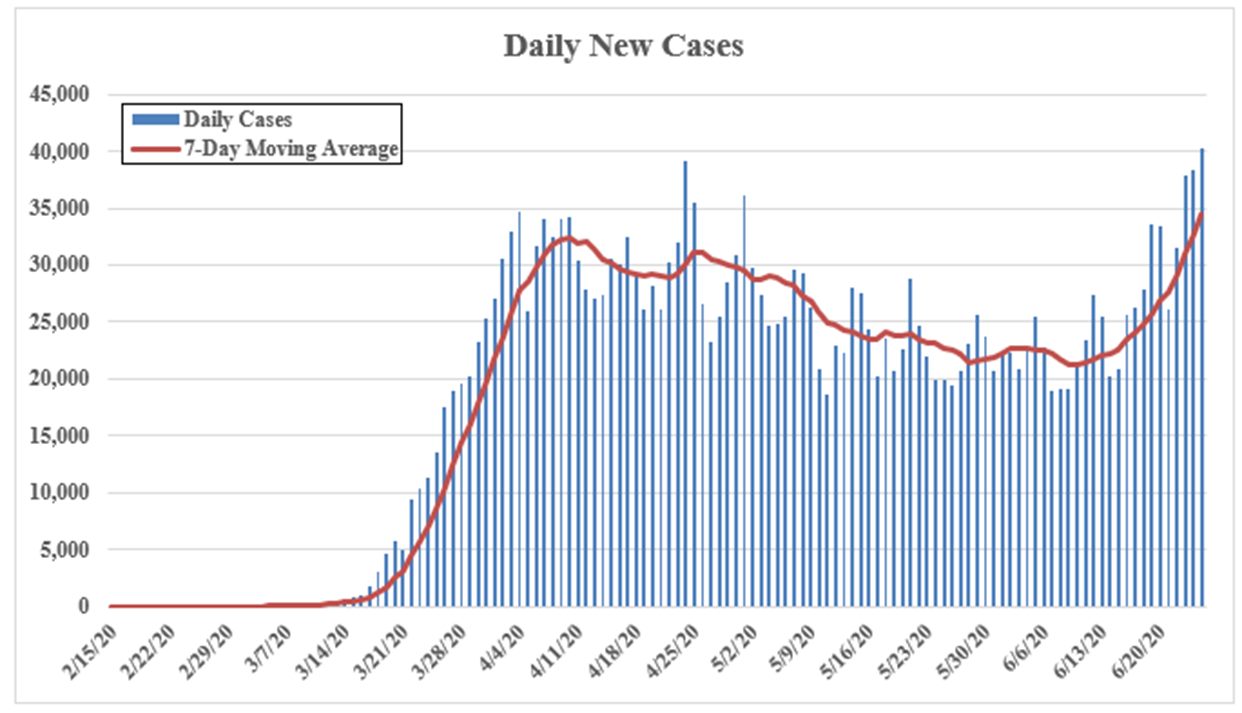 And while some are trying to paint a dark, grim picture and others continue to ignore the perils of the disease, as always the truth lies somewhere in the middle.

Yes, cases are up, but so is testing. 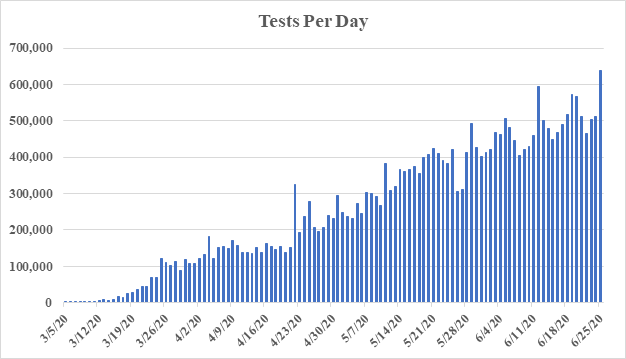 But this is not the whole story (this time). Nationwide, the percent of those tested who test positive is rising but still well below 10%: 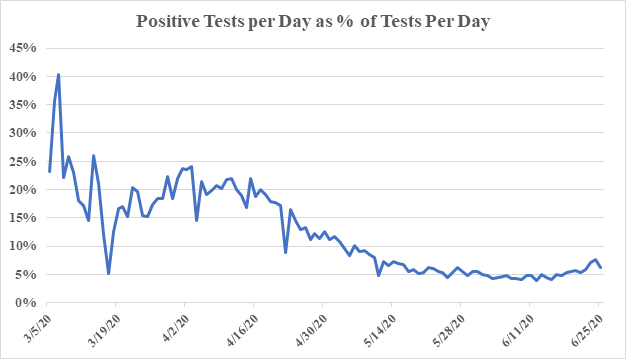 2) The South and the West are leading the charge in terms of new outbreaks (source), while the Northeast is doing very well. 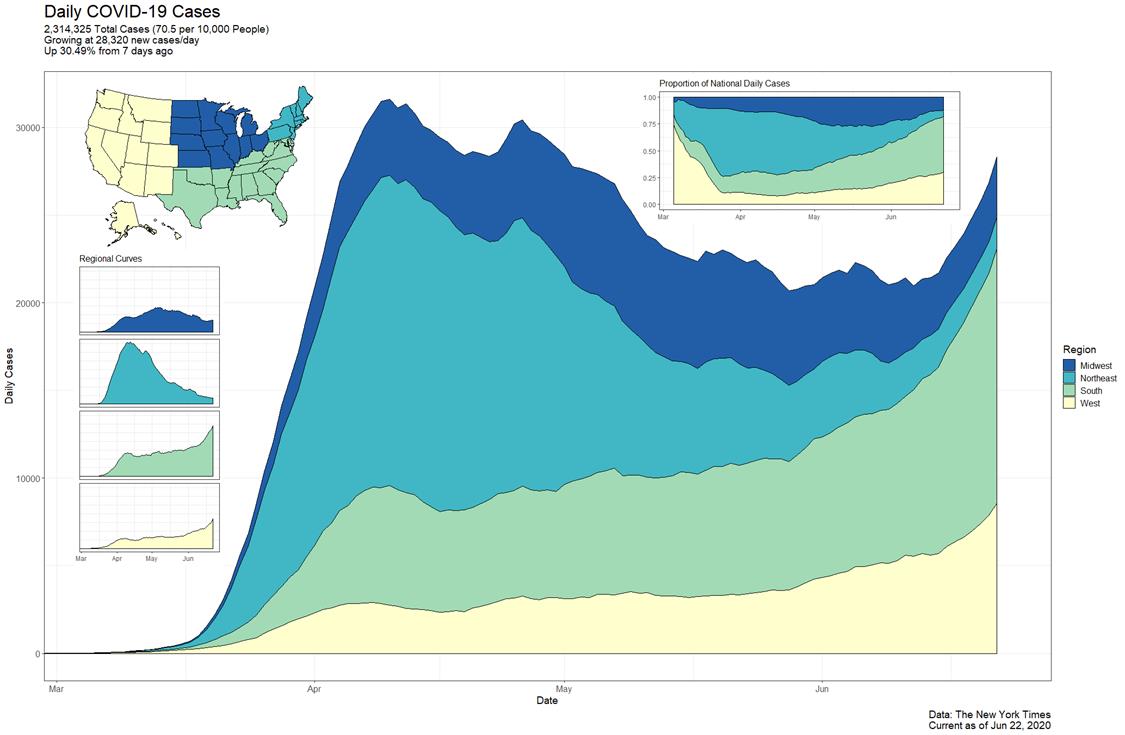 In particular, Arizona, California, Florida, and Texas are showing the biggest spikes in new cases: 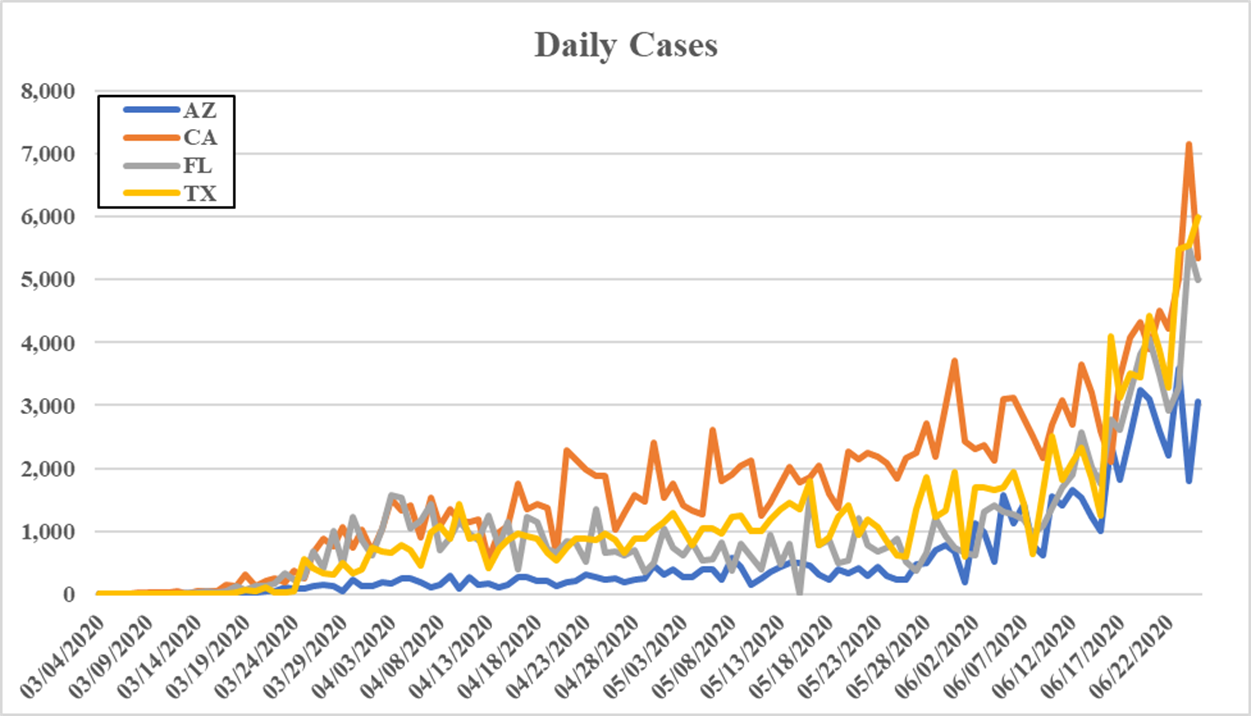 And again, the increase in cases is not just due to more testing: 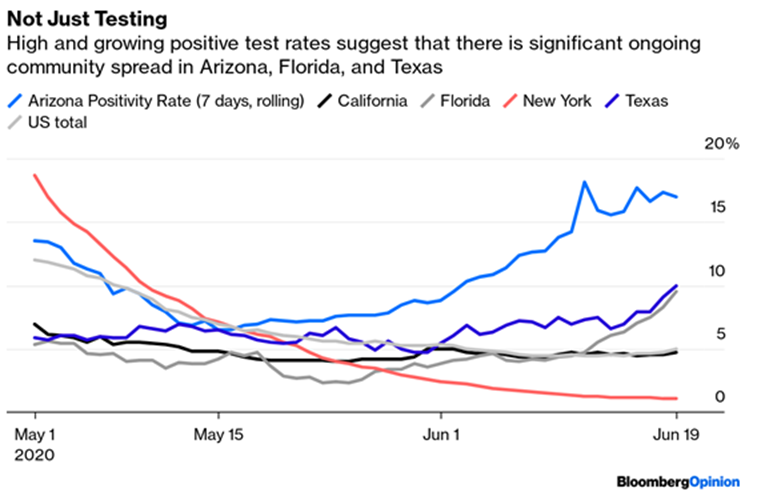 While these charts may look scary, deaths in these states being stable or down: 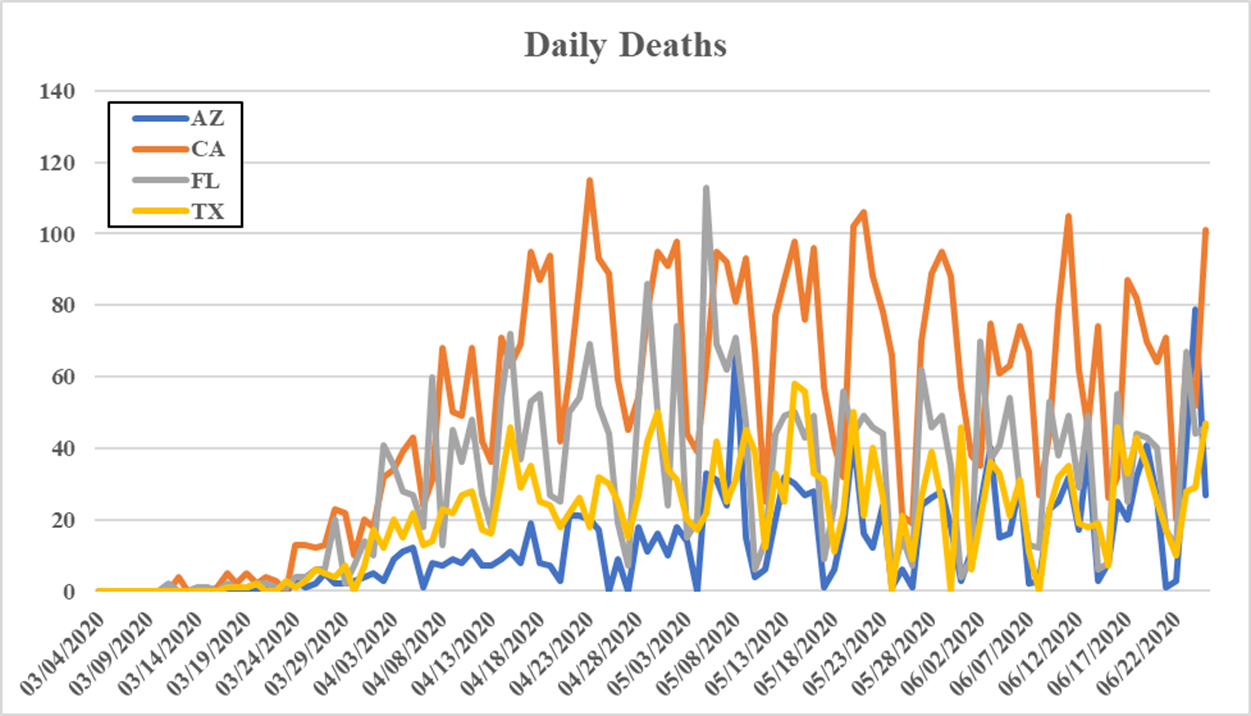 Here are these four states combined: 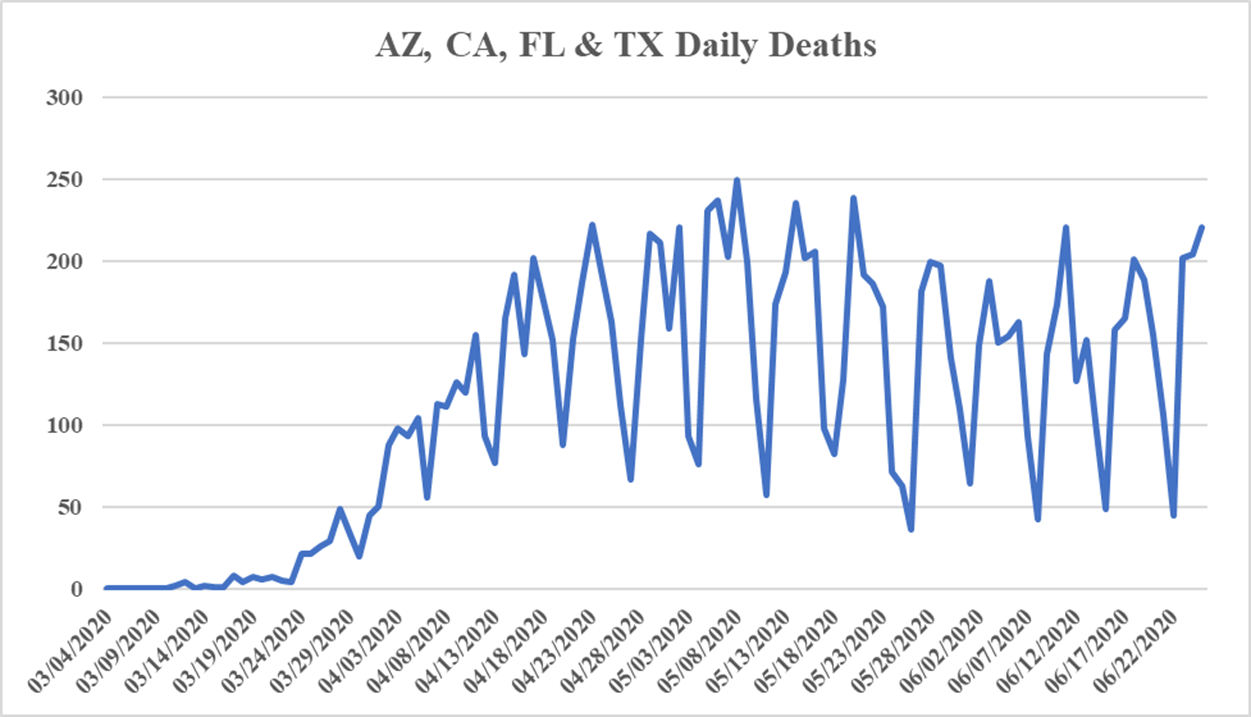 Given how far our testing has come, I’d expect the lag between cases and hospitalizations to be larger now (it is much easier to get tested early) but the lag between hospitalizations and deaths to be about the same. So, if we are seeing a spike in cases today, then this would indicate deaths would begin to spike in 10-20 days in these four states.

Interestingly, despite cases beginning to creep up in AZ around Memorial Day, deaths have yet to trend upwards: 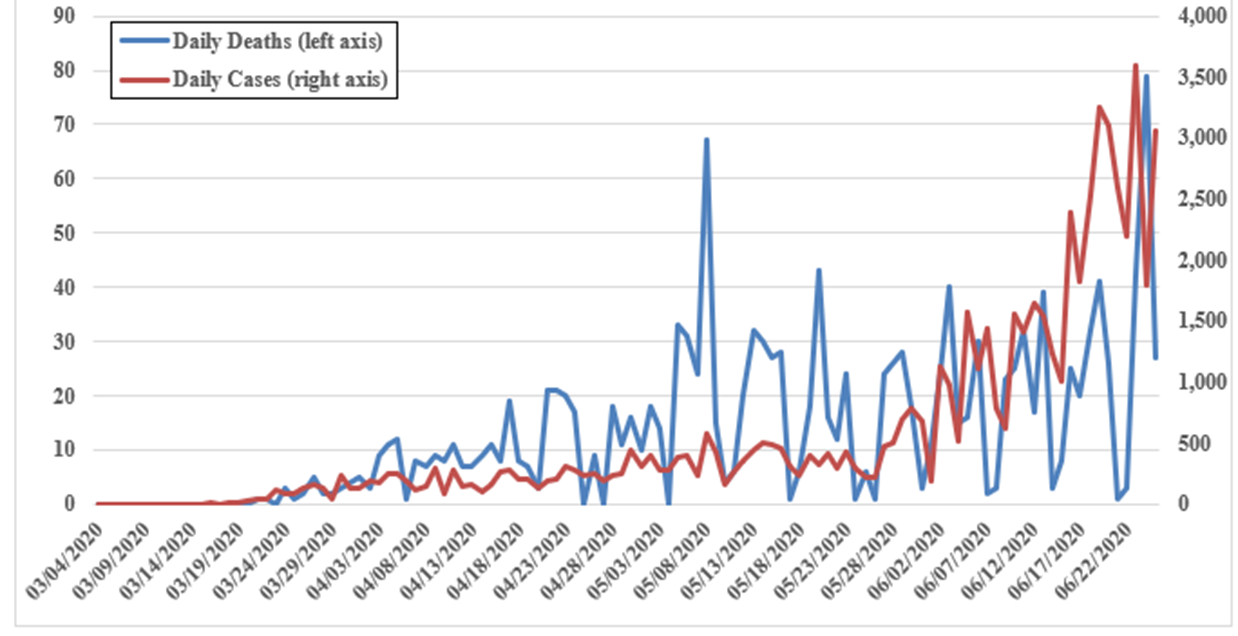 3) And this is despite Arizona’s continued surge in COVID hospital bed usage and ICU bed usage: 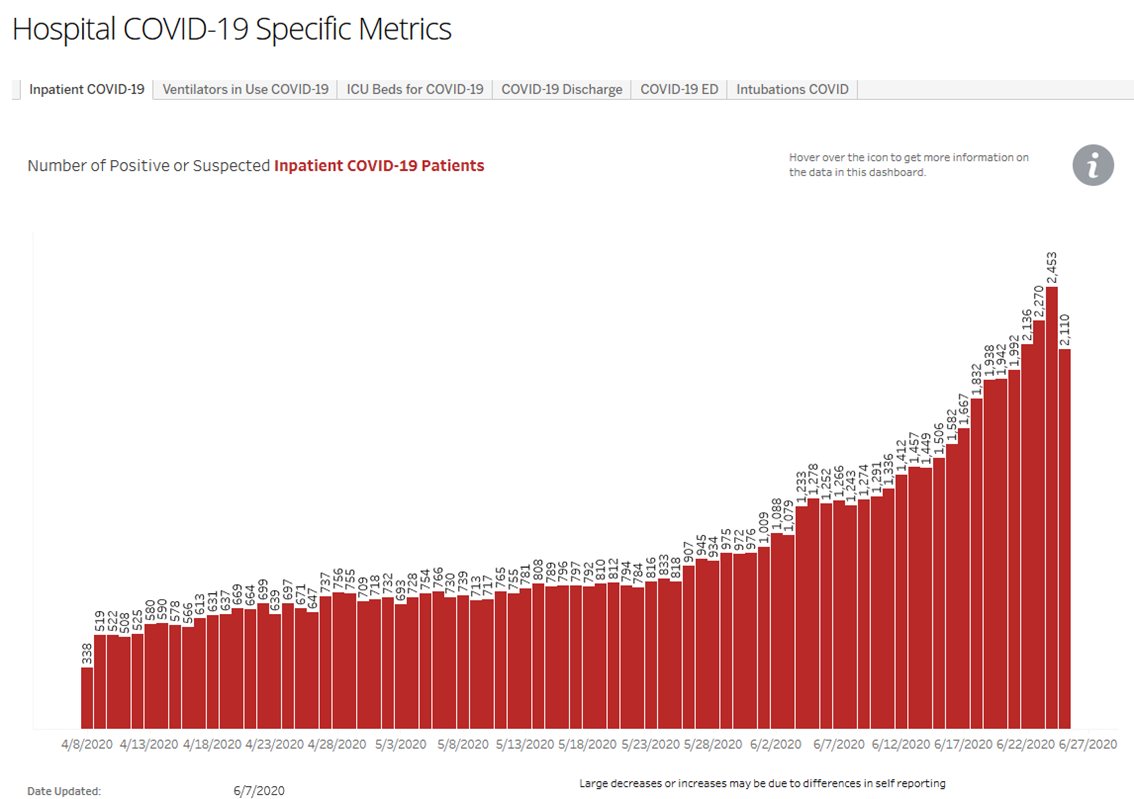 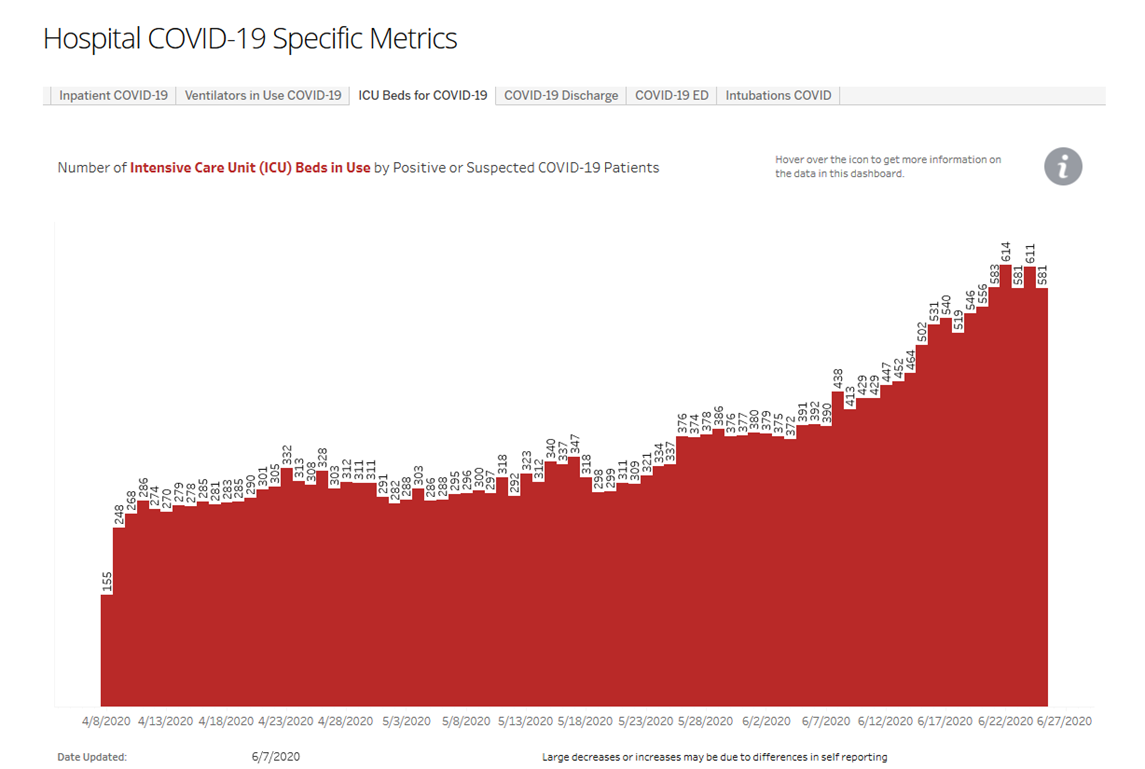 4) Ultimately, we have to remember our objective from March and April: flatten the curve so our hospitals were not overwhelmed, which we have achieved, as COVID patients do not occupy much hospital capacity (yet): 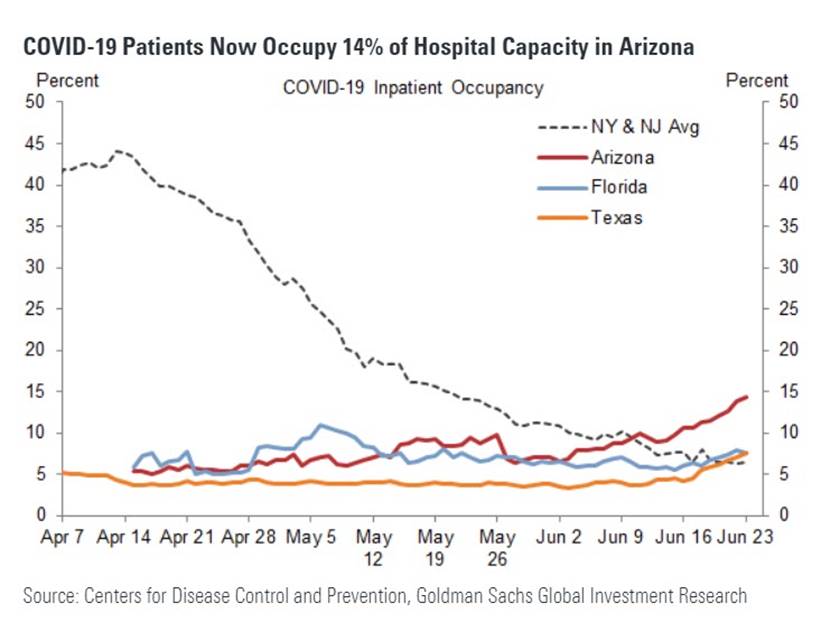 But there have been pockets of concern. The media and social media has grown concerned about the ICU capacity at Houston’s TMC reaching 97% capacity, but TMC leaders: COVID-19 surge is not eclipsing Houston hospital capacity. Excerpt:

“We have the ability to go far higher than that in terms of the ICU beds we can utilize for COVID-19 patients,” Boom said during a press conference. “…We have PPE (personal protection equipment) we have the capability, (and) we have learned enormous amounts about caring for people with COVID-19.”

Dr. Doug Lawson, St. Luke’s Health CEO, said hospitals are actively planning for anticipated increases over the coming months, which includes bringing in contract nurses and clinicians from other parts of the country to help with surges and doubling critical care capacity.

That is likely due to Texas having reallowed elective treatment. Now, Governor Abbott and Texas has paused the reopening plan and elective surgeries as coronavirus cases and hospitalizations rise. Excerpt:

Many businesses in Texas were granted permission to reopen in May. Restaurants, gyms, retailers, professional sports, bars and other venues were allowed to reopen with reduced capacity. It wasn’t immediately made clear which businesses wouldn’t be allowed to be reopen moving forward or when the order would be lifted.

Earlier on Thursday, Abbott ordered all licensed hospitals in hard-hit Bexar, Dallas, Harris and Travis counties to postpone elective procedures in order to protect hospital capacity for Covid-19 patients. Those counties include the state’s largest cities — Houston, San Antonio, Dallas and Austin. There are currently 4,389 Covid-19 patients hospitalized statewide in Texas, up from 2,793 a week ago, according to the state’s health department.

“These four counties have experienced significant increases in people being hospitalized due to COVID-19 and today’s action is a precautionary step to help ensure that the hospitals in these counties continue to have ample supply of available beds to treat COVID-19 patients,” Abbott said in his executive order.

While Arizona has not made the same mandates as Texas, hospitals are reconsidering elective surgeries as hospital capacity in the state is now at 83%. As COVID-19 cases and hospitalizations rise, could elective surgeries stop? Excerpt:

At Dignity Health, two hospitals are reducing elective surgeries over the next week to “prepare for additional surge capacity and give us additional time to support and increase our staffing,” spokeswoman Carmelle Malkovich said in an email.

Banner Health, the state’s largest hospital system, is “making adjustments” this week to its elective surgery decisions based on capacity and staffing at individual hospitals, spokeswoman Becky Armendariz said. Banner is now using traveling nurses to help with staffing and has had more than 200 travel nurses join Banner hospitals in the past week, she said.

Hospitals were allowed to resume elective procedures, which were paused for more than a month, starting May 1, provided they met certain criteria for available personal protective equipment, beds and staffing, according to an executive order from Gov. Doug Ducey in late April.

5) And while our treatments for COVID have certainly improved with remdesivir and dexamethasone and other, it still does not completely explain why Arizona COVID deaths have barely budged. I believe that is largely because the average age of new coronavirus cases nationwide is falling, as well as those that are hospitalized. 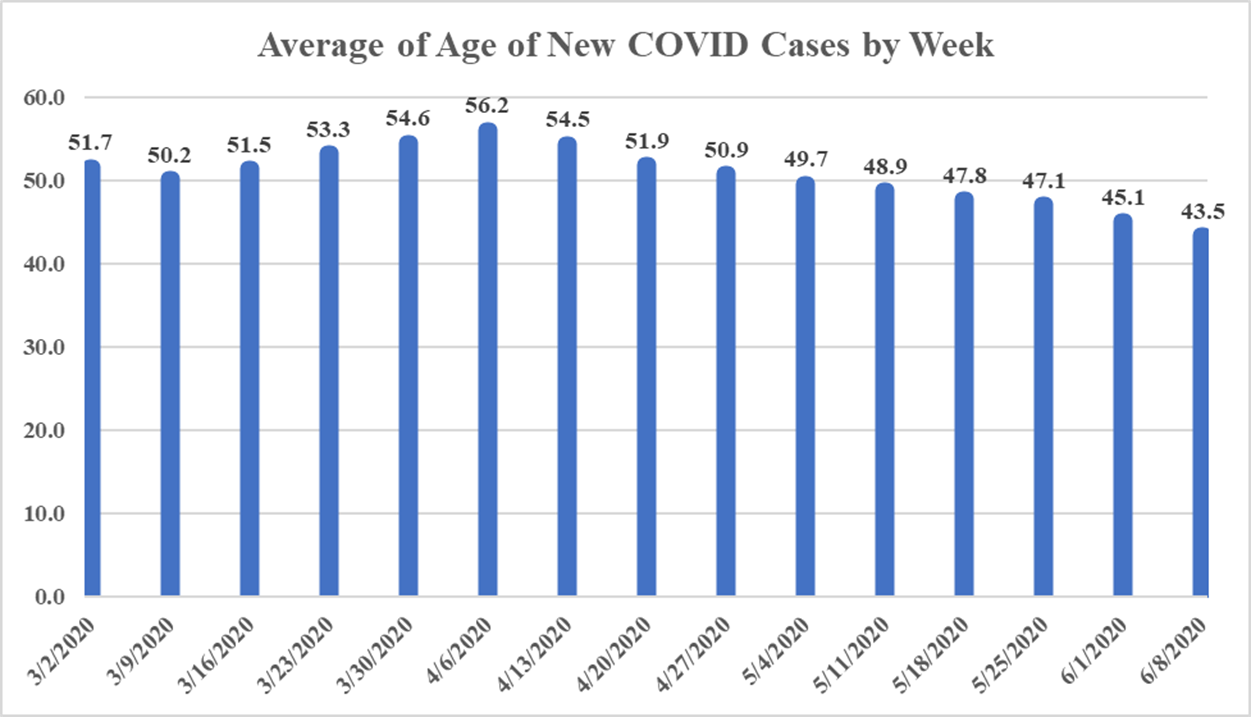 * Data is from a sample of labs. https://www.cdc.gov/coronavirus/2019-ncov/covid-data/covidview/06192020/public-health-lab.html 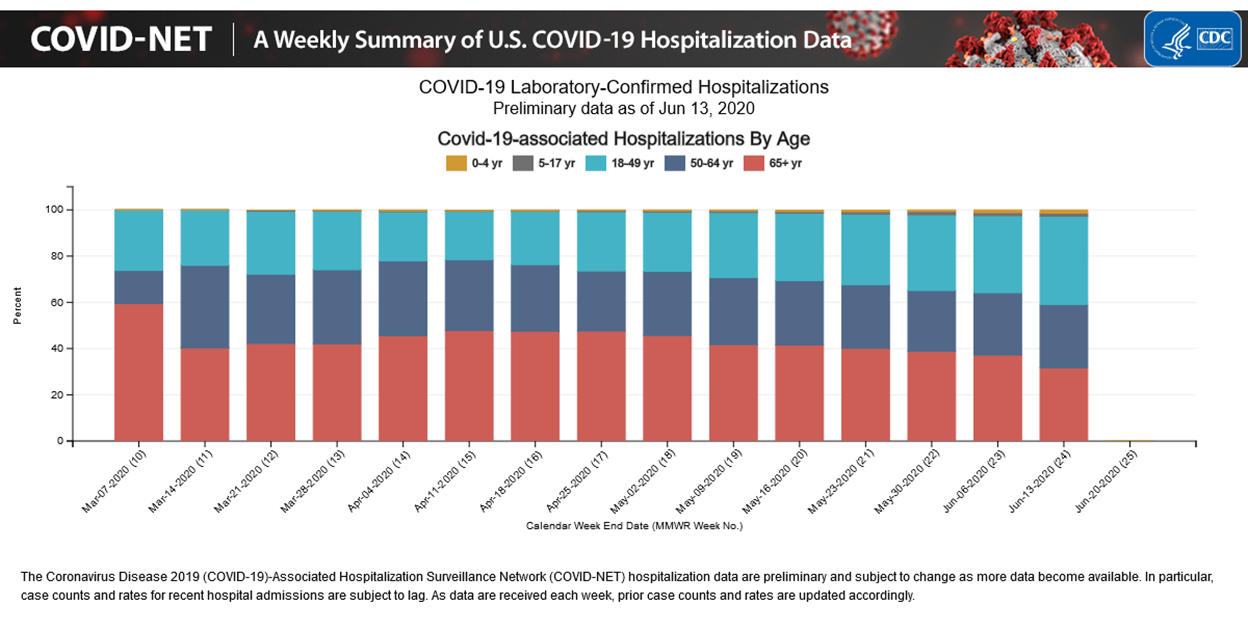 And in Arizona’s case, the demographics are heavily skewed towards younger people which may explain the lack of COVID deaths: 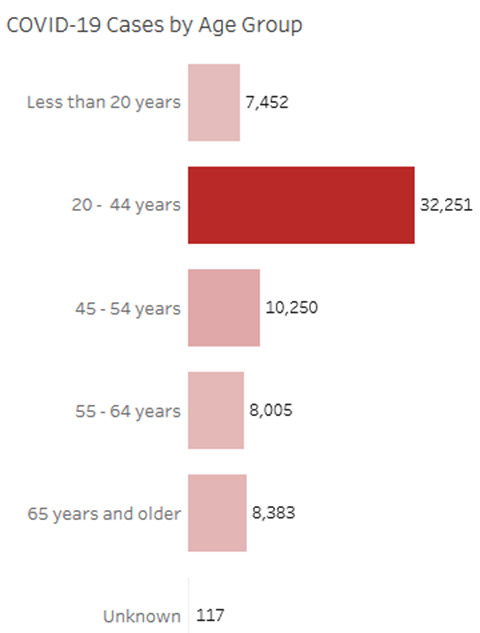 So, that means that those who are getting COVID are younger and healthier. Which means there should be less per capita hospital usage and fewer severe outcomes. And as we know that the fatality rate is far better for those under 65. Here is data from Spain, for example:

6) Of course, it is not all sunshine and rainbows. If these states do not get a handle on their outbreaks, it can get much worse… quickly. However, we have far more PPE today, more testing, and better tools, so we are clearly better able to handle this second wave far more effectively than we did the first.

And this disease continues to be highly infectious, as we saw in Michigan after 50 people tested positive for the disease two weeks after attending a bar that was at 50% capacity.  Excerpt:

Fifty one people have tested positive for coronavirus after going to a Michigan bar that reopened at 50 percent capacity two weeks ago – as the number of young Americans getting infected with the virus continues to surge.

Health officials say the cluster of cases has been linked to the Harper’s Restaurant and Brewpub in Lansing in Ingham County.

All of the people with cases linked to Harper’s are between the ages of 19 and 23.

A number are connected to Michigan State University.

Of those who have the virus, none have been hospitalized and most have mild symptoms. At least four cases have been asymptomatic, health officials said

7) This article, Why hasn’t the second COVID surge led to more deaths?, hits the nail on the head on why the disease is not so deadly (again, yet). Excerpt:

Infections up 15 percent in two weeks, with 37,000 recorded in a day. For those who are inclined to see it that way, the graph of US COVID-19 cases is confirmation of the folly of reopening society far too soon.

But there is a little problem with this analysis: while the graph of cases in the US shows something which could be described as a second spike, the graph of deaths has stubbornly refused to follow suit. Quite the reverse: having peaked at over 2,000 deaths a day in April it is now down to around 600 a day and falling steadily.

Until the middle of May, the two graphs seemed to be coupled. Deaths trailed the number of new recorded cases by two weeks, rising and falling in tandem. But then something strange happened. The fall in new cases began to falter and then to reverse. The number of deaths, on the other hand, carried on falling, as in a classic epidemic curve.

How come? There are four possibilities — or possibly a combination of all four. Either more cases are being recorded, as a result of ramping-up of testing; the disease is becoming less virulent; we are getting better at treating it; or the disease has started infecting less vulnerable groups.

There is support for all of those hypotheses. The US has now conducted 29 million COVID-19 tests, more than any other country. Moreover, the number of tests being performed has risen as the epidemic has progressed. The US has now conducted 87,000 for every million population — nearly half as many again as in Germany, a country that has been praised for its testing. Conduct more tests for a disease — especially one in which 80 percent of infected people are asymptomatic and what is the result? You pick up more cases. A rise in the number of recorded cases does not necessarily mean the number of actual cases is going up — it might simply mean your detection rate is going up.

8) Another issue that we have run into before is that “daily case counts” are outdated. When we announced in early April, we believed that NYC cases had peaked in late March it was because NYC began releasing data on when tests were administered… giving as a much more live look at the true spread of the outbreak. An astute reader wrote into us about this exact problem in Ohio.

Even so, it appears that the maybe half of the testing/posting lag is less than a week with the other half spread out over the balance of the month.   I realize that 2 days do not make a trend, so that is a wild guess.  But you can at least see big increases for the prior two days and then generally smaller as one goes back in time.  It’s no wonder this is such a mess to get accurate and consistent data, and this is just Ohio.

My analyst, Alex, also discovered that the CDC is lumping in antibody tests and PCR testing together into the COVID case counts… From the CDC’s website,

And an article: The CDC is lumping positive COVID-19 viral and antibody tests together. Here’s why that’s bad. Excerpt:

The U.S. Centers for Disease Control and Prevention (CDC) and several state health departments have been reporting COVID-19 diagnostic tests and antibody tests as one grand tally, rather than keeping their results separate, The Atlantic reported.

Namely, combining the numbers could make America’s diagnostic testing capabilities and testing rates appear higher than they actually are, according to The Atlantic. And as the tests serve profoundly different purposes, “positive” results from either test cannot be interpreted in the same way. Reporting all the positive results together, as one number, could skew our understanding of how many new COVID-19 cases emerge over time — a crucial metric to help control outbreaks as states begin reopening.

So case counts may not even be giving us a live look at the outbreak…. I know myself and many others have been for antibody tests. If these are getting counted amongst the case counts, then would this not suggest the “outbreak” may be just due to increased awareness & availability of antibody tests? I am sure that this is the case to some extent (much like the overcounting of COVID deaths), but the rising hospitalizations in AZ, the 32% increase in coronavirus hospitalizations in CA, ED visits in FL (below),  and hospitalizations in trauma service areas in TX show that the outbreaks are real. 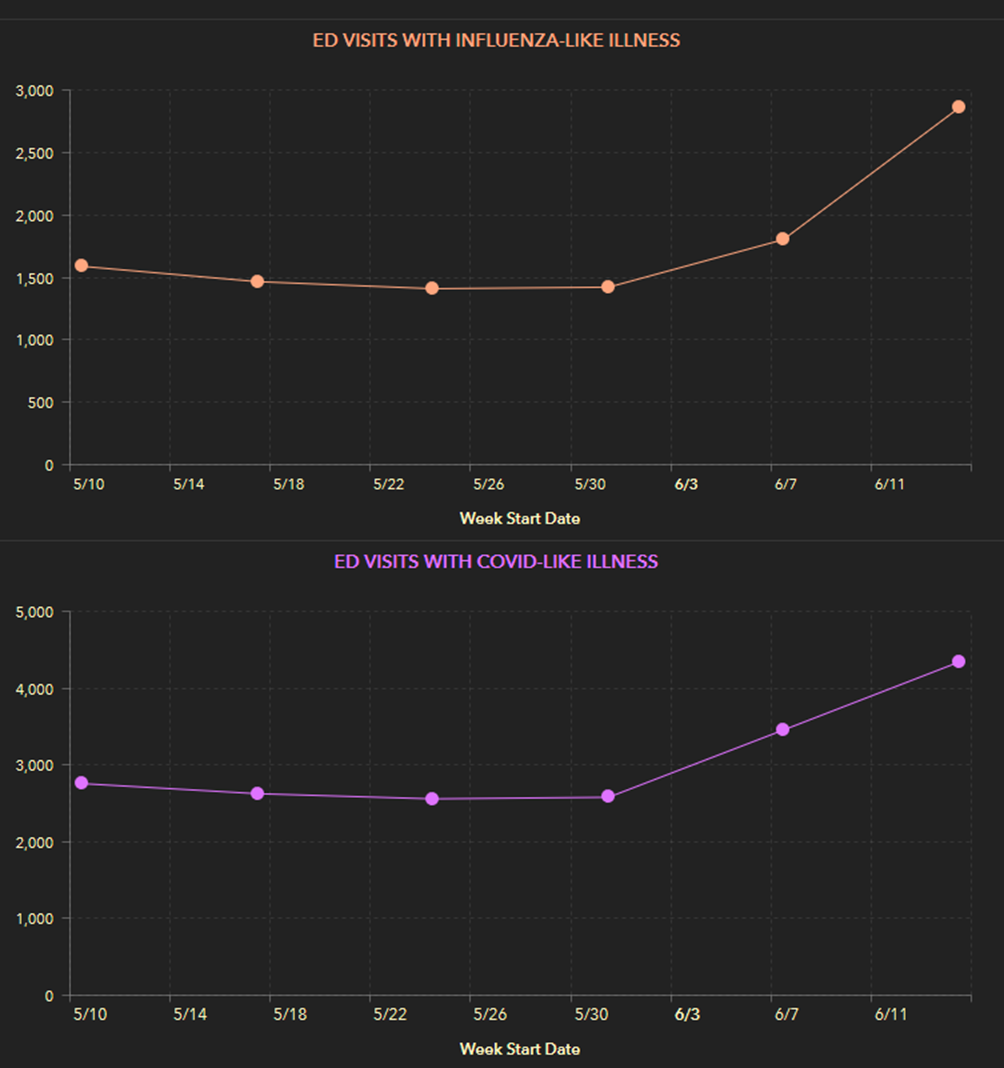 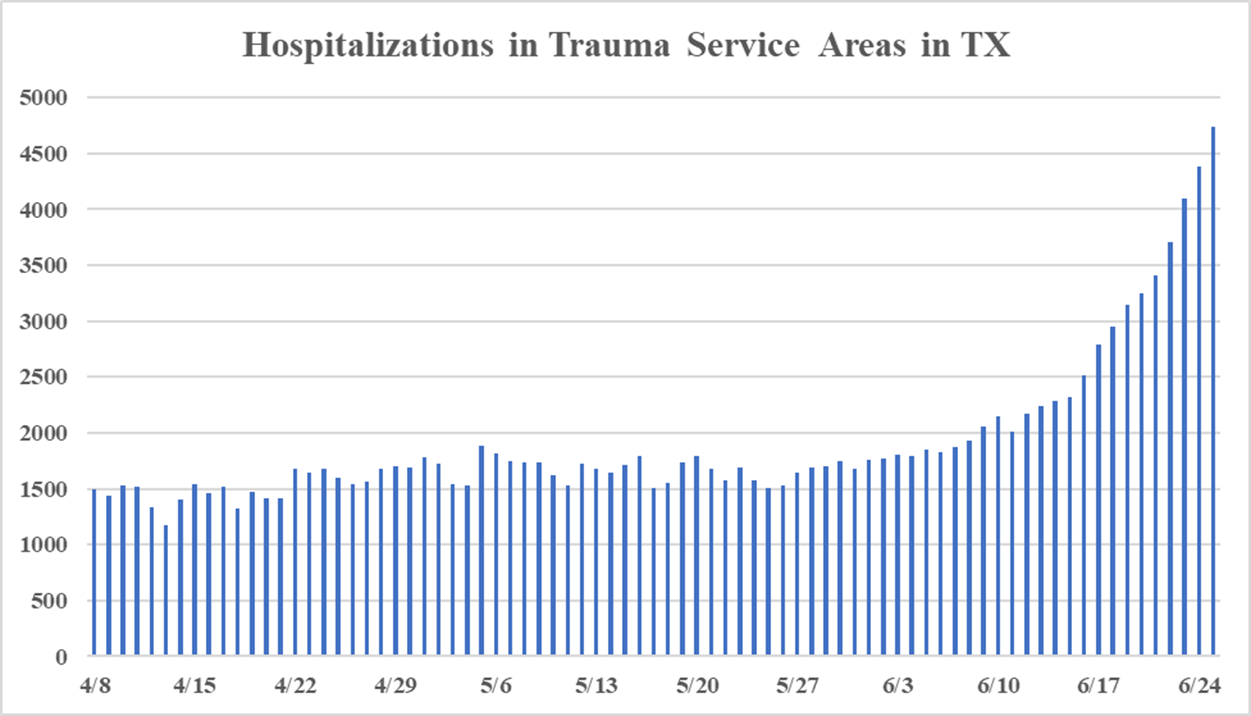 9) All in all, while the trends are concerning, what happened in NYC has scarred people nationwide. I think it is a very low probability event (5% to 10%) that we see what happened in NYC happen elsewhere. Clearly, the reopenings need to slow down in these states but that does not mean that the coronavirus situation is anywhere near as dire as the current headlines indicate.