I’m back from my big climb (see below), so lots to catch up on…

1) Every day there are frightening new headlines about rising cases across the U.S., with record numbers in roughly a dozen states. This chart shows the rising national trend by day, with the line showing the seven-day moving average:

2) The rising cases here are in sharp contrast to Europe, as this chart shows: 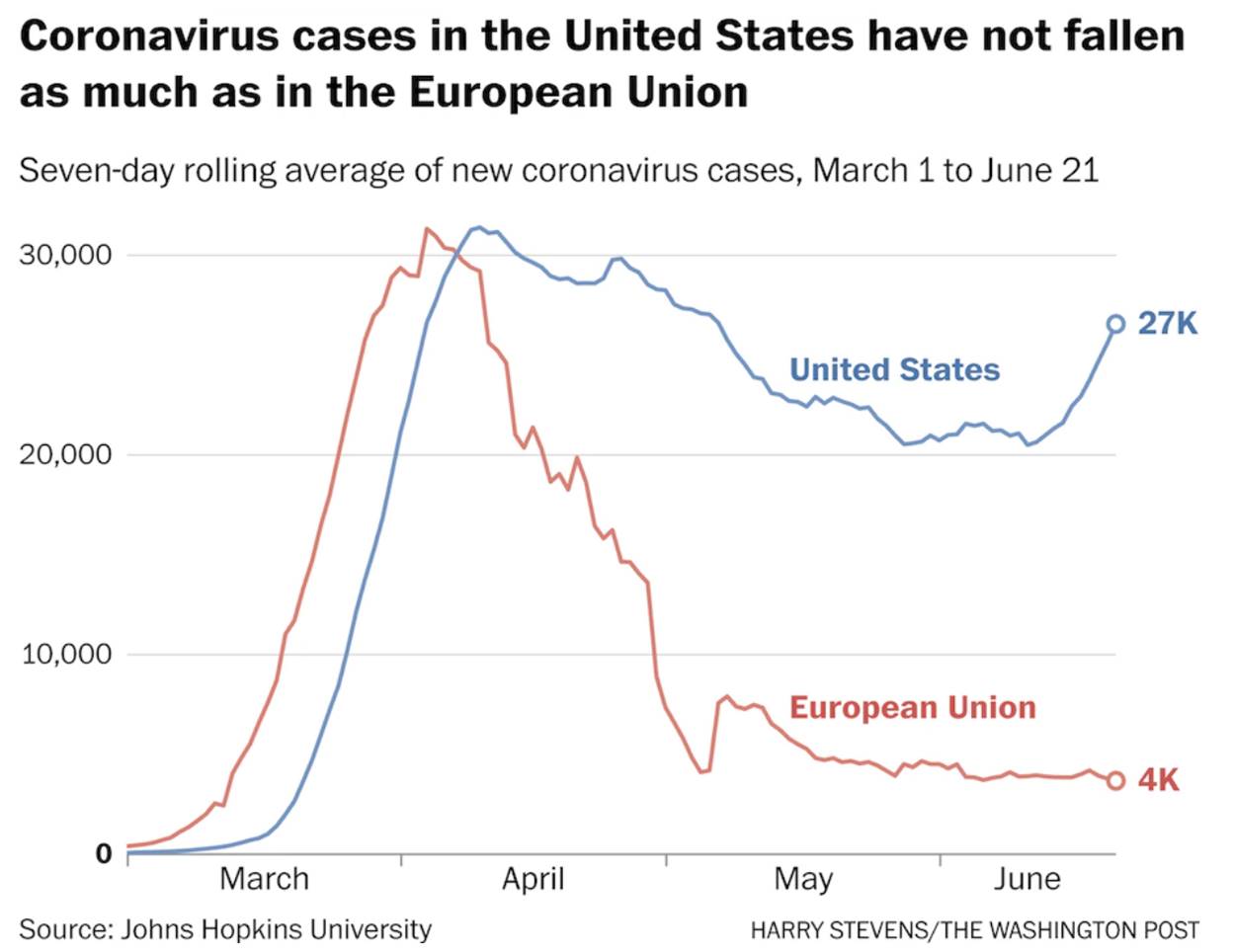 This article explores the many possible explanations for this terrible divergence: In countries keeping the coronavirus at bay, experts watch U.S. case numbers with alarm. Ironically, a major reason is that that Europeans listened to U.S. experts, while we didn’t! Excerpt:

Some European health experts fear that the rising U.S. caseloads are rooted in a White House response that has at times deviated from the conclusions of leading scientists.

“Many scientists appeared to have reached an adequate assessment of the situation early on [in the United States], but this didn’t translate into a political action plan,” said Thomas Gerlinger, a professor of health sciences at the University of Bielefeld in Germany. For instance, it took a long time for the United States to ramp up testing capacity.

Whereas the U.S. response to the crisis has at times appeared disconnected from American scientists’ publicly available findings, U.S. researchers’ conclusions informed the actions of foreign governments.

“A large portion of [Germany’s] measures that proved effective was based on studies by leading U.S. research institutes,”

3) Our rising numbers also have to do with Americans’ lousy compliance with basic things like social distancing and mask wearing plus our fractured politics, as this article highlights: The battle over masks in a pandemic: An all-American story. Excerpt:

In this sprawling, heterogeneous country, the pandemic has become yet another thing on which Americans are divided.

Mask-wearing for some people is an identifier of broader beliefs and political leanings. Like so many issues rooted in science and medicine, the pandemic is now fully entangled with ideological tribalism. This has played out before: helmets for motorcyclists, seat belts in cars, smoking bans in restaurants. All of those measures provoked battles over personal liberty.

Now it’s masks and the coronavirus, with face coverings emerging as an emblem for what cleaves the nation. A flurry of recent studies supports wearing cloth face coverings as a means to limit transmission of the novel coronavirus, which causes the illness covid-19. To many people, masks represent adherence to civic duty and a willingness to make individual sacrifices for the greater good of public health. To others, masks symbolize government overreach and a violation of personal liberty.

4) President Trump continues to make a bad situation worse, reaching a new low when he said during his rally on Saturday:

Trump reiterated his argument at his Tulsa, Oklahoma rally on Saturday night that increased coronavirus testing leads to a higher number of cases identified in the United States, calling testing a “double-edged sword.”

5) A related article by Nick Kristof: What the Pandemic Reveals About the Male Ego. Why are the rates of coronavirus deaths far lower in many female-led countries? Excerpt:

Are female leaders better at fighting a pandemic?

I compiled death rates from the coronavirus for 21 countries around the world, 13 led by men and eight by women. The male-led countries suffered an average of 214 coronavirus-related deaths per million inhabitants. Those led by women lost only one-fifth as many, 36 per million.

If the United States had the coronavirus death rate of the average female-led country, 102,000 American lives would have been saved out of the 114,000 lost.

“Countries led by women do seem to be particularly successful in fighting the coronavirus,” noted Anne W. Rimoin, an epidemiologist at U.C.L.A. “New Zealand, Denmark, Finland, Germany, Iceland, Norway have done so well perhaps due to the leadership and management styles attributed to their female leaders.”

… It’s not that the leaders who best managed the virus were all women. But those who bungled the response were all men, and mostly a particular type: authoritarian, vainglorious and blustering. Think of Boris Johnson in Britain, Jair Bolsonaro in Brazil, Ayatollah Ali Khamenei in Iran and Donald Trump in the United States.

Virtually every country that has experienced coronavirus mortality at a rate of more than 150 per million inhabitants is male-led.

… Those leaders who handled the virus best were those who humbly consulted public health experts and acted quickly, and many were women; in contrast, male authoritarians who botched the response were suspicious of experts and too full of themselves.

In recent days, the media has taken to sounding the alarm bells over a “second wave” of coronavirus infections. Such panic is overblown. Thanks to the leadership of President Trump and the courage and compassion of the American people, our public health system is far stronger than it was four months ago, and we are winning the fight against the invisible enemy.

While talk of an increase in cases dominates cable news coverage, more than half of states are actually seeing cases decline or remain stable. Every state, territory and major metropolitan area, with the exception of three, have positive test rates under 10%. And in the six states that have reached more than 1,000 new cases a day, increased testing has allowed public health officials to identify most of the outbreaks in particular settings—prisons, nursing homes and meatpacking facilities—and contain them.

Lost in the coverage is the fact that today less than 6% of Americans tested each week are found to have the virus. Cases have stabilized over the past two weeks, with the daily average case rate across the U.S. dropping to 20,000—down from 30,000 in April and 25,000 in May. And in the past five days, deaths are down to fewer than 750 a day, a dramatic decline from 2,500 a day a few weeks ago—and a far cry from the 5,000 a day that some were predicting.

The truth is that we’ve made great progress over the past four months, and it’s a testament to the leadership of President Trump.

7) The rising cases here are NOT solely due to more testing, though this is part of it. This chart (black line) shows the increase in tests over time, which is something to celebrate (the red line is confirmed cases): 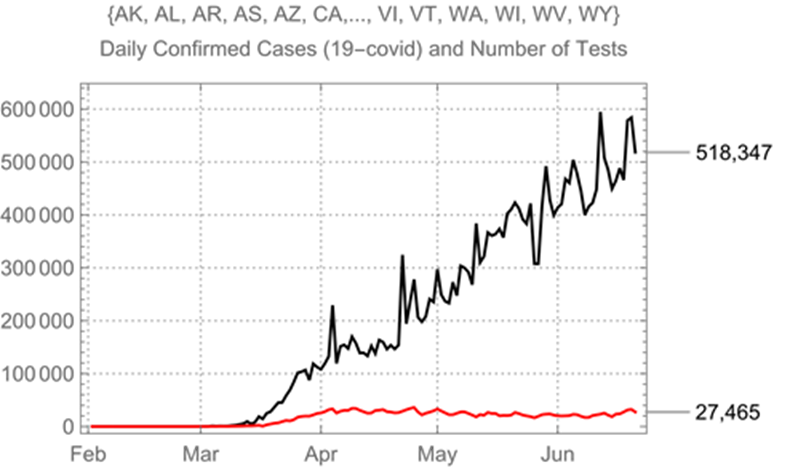 8) The reason the black line is going up while the red line is roughly flat is because the percentage of people testing positive has fallen to roughly 5%, as you can see in this chart (again, this is something to celebrate): 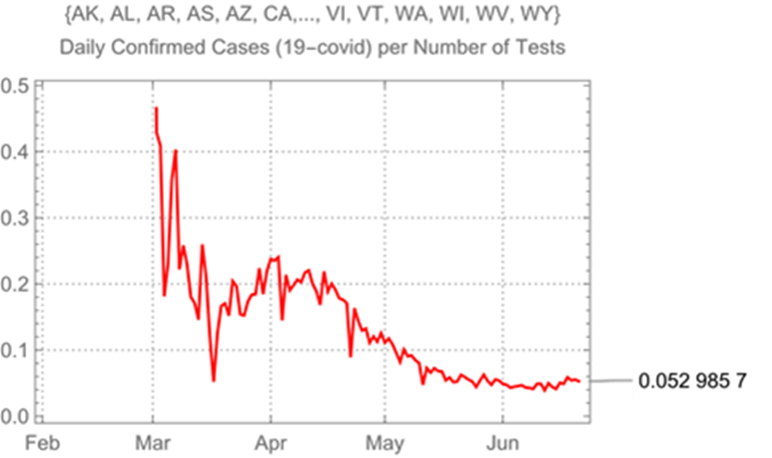 9) But the most important thing to celebrate is our plunging mortality rate. As you can see in this chart, the number of daily deaths is trending downward, even as the number of cases is going up:

One of my readers emailed me about this:

I think something interesting is going on with the virus.  Clearly some states are seeing real growth in spread.

But the little discussed story is the drop in deaths. The 7-day trend is consistently downwards even though 7-day US cases have been flat and more recently rising.  Why is this?

Are a larger percentage of new cases younger people, who tend not to get hospitalized?

Are nursing homes much better protected and therefore a much smaller proportion of those hospitalized now very old?

Of course it could be some combination.

As you know mainstream media focuses almost exclusively on the bad news, but we rely on your emails to dig deeper!

Thank you Simon! I don’t have any major insights here, but will share what I learn in future emails…

PS—I finished climbing The Nose of El Capitan on Saturday!

It was one of the most exhausting yet amazing adventures of my life – and for a great cause. (It’s not too late to support my climb and the thousands of KIPP charter school students who are making it to and through college – here’s the donation page.)

I’ll do a full write-up when I get a chance (I have more climbing to do first!), but in the meantime, here are four pictures below.

In the first, I’m on the port-a-ledge where I slept all three nights (quite comfortably!). In the second, I’m climbing under the Great Roof, a famous feature on the route. In the third, my thumb happens to point to where we started three days and 2,500 vertical feet earlier (you can also see the “pigs” – the heavy bags we had to haul that contained our water, food, sleeping bags, etc.). And in the final one, my guide Paul and I are at the top (with Half Dome in the background). 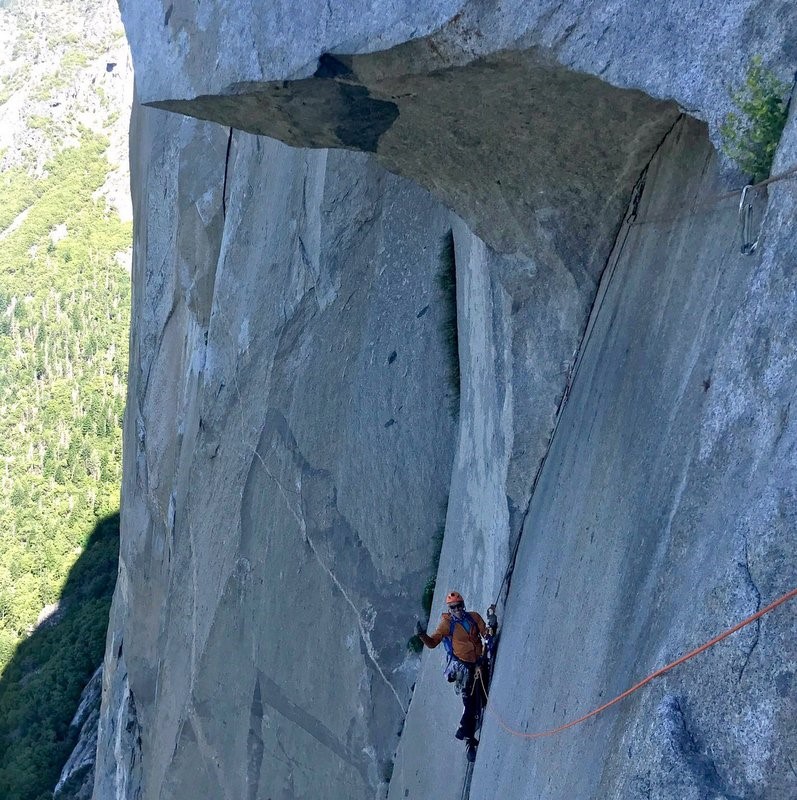 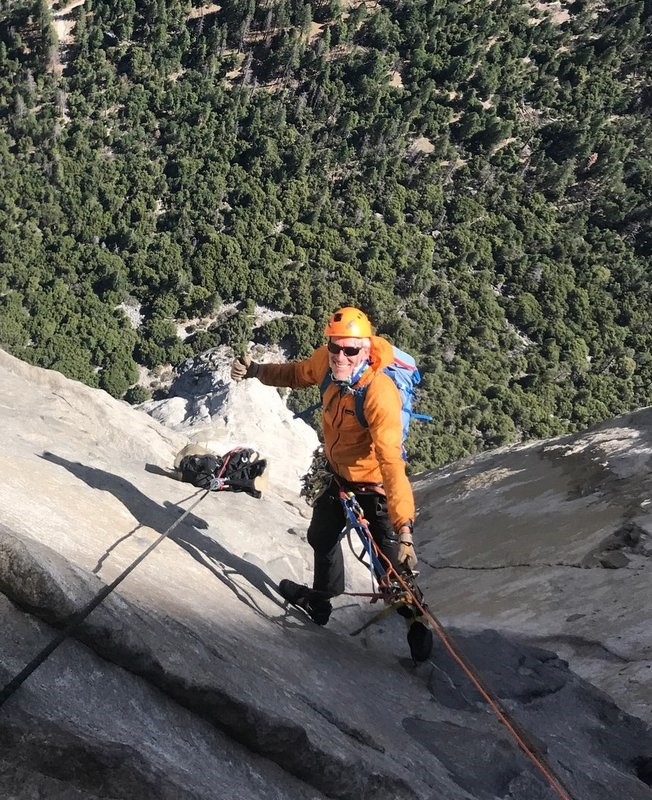 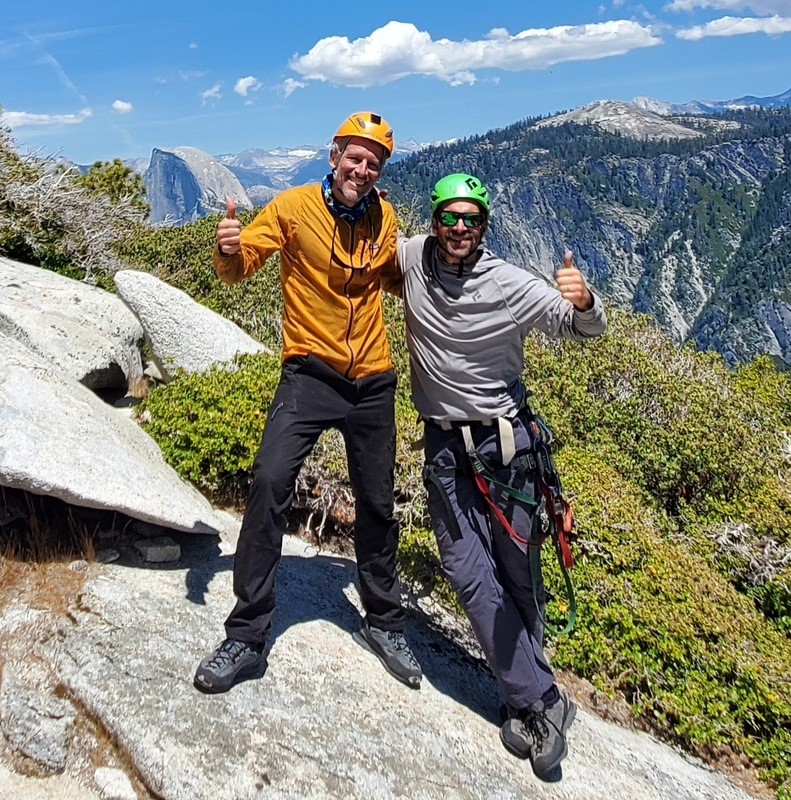 After we hiked back to the valley, I celebrated by doing a back flip into the Merced River – I posted the video here.