1) We have hotspots emerging everywhere, but most folks don’t even take it seriously enough to do something as simple as wearing a mask. Gee, I wonder where they could have gotten that idea??? Here’s a chart on current COVID hot spots: 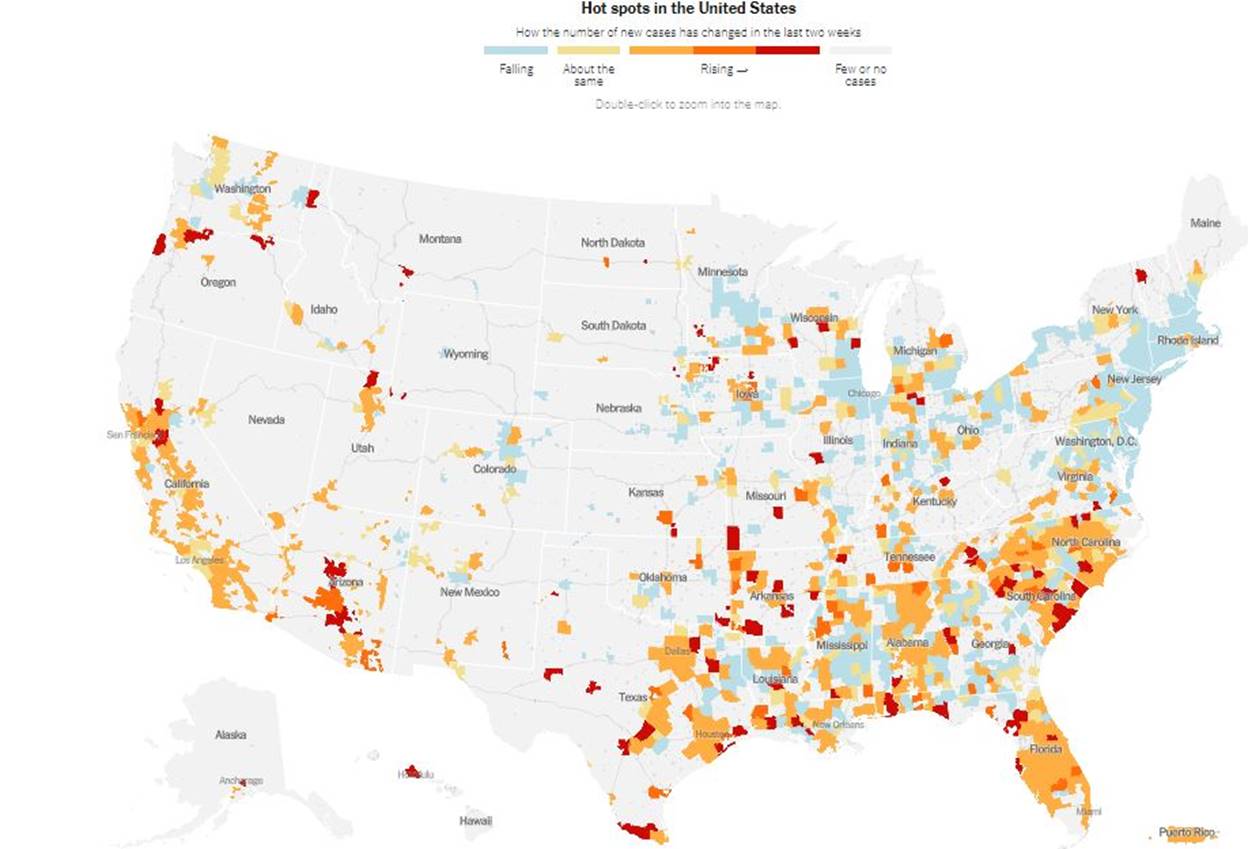 2) Dr. Michael Osterhorm, the director of the Center for Infectious Disease Research at the University of Minnesota, spoke with Chris Wallace of Fox News on the rise of new cases in 20+ states.

He believes that roughly 5% of the population in the U.S. have had the disease… So, we have a long way to go before we reach any sort of level of herd immunity. Whether that’s 30% or 70%, it does not matter. We are just not close.

He reiterates what we continue to hear from public health officials. The virus is not going magically go away.

This is still a pandemic. Practice caution. Avoid large crowds in indoor spaces. Protect the vulnerable.

3) You’d think that New Yorkers would be particularly cautious, given how badly we got him, but maybe not based on this tweet from Governor Cuomo. While this crowd is outside, it is a large number of people in a close space. 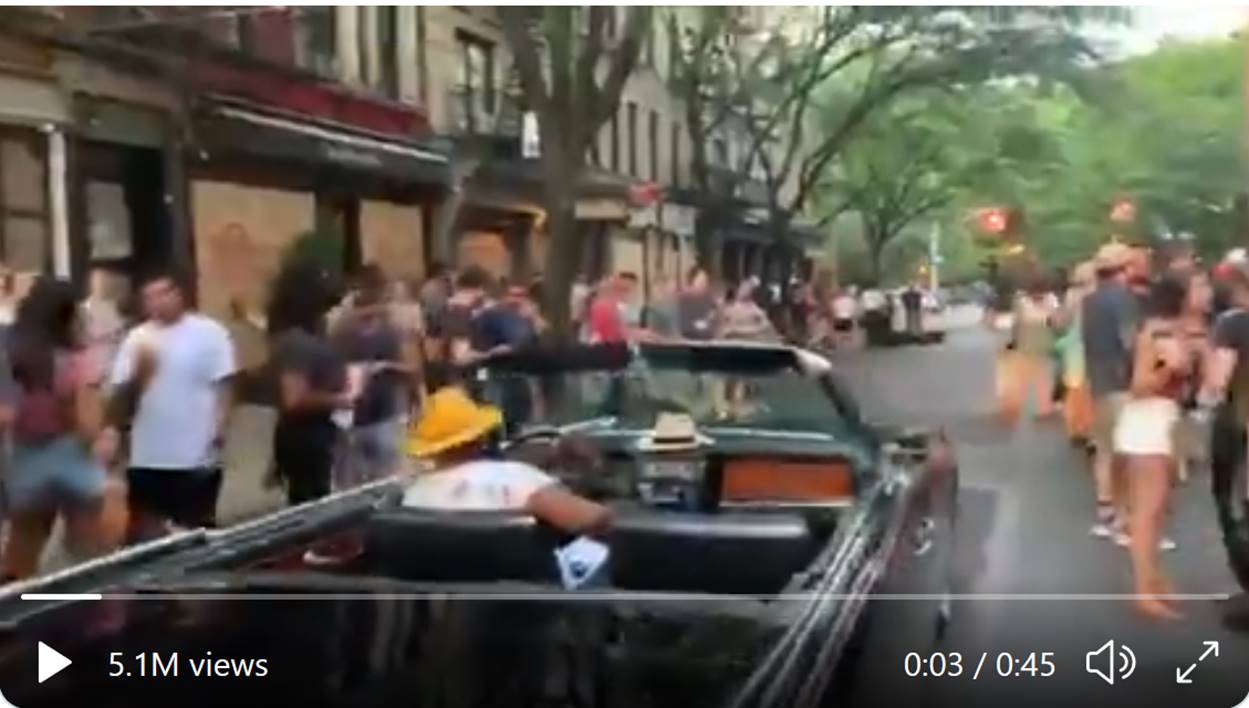 4) The best way to enjoy the summer according to former F.D.A. head, Dr. Scott Gottlieb and Yuval Levin, is to

Follow the New Rules for Covid Summer: Be Flexible and Vigilant. Excerpt:

That means, for example, encouraging (and practicing) sensible behavior that can reduce the spread. Wearing face masks is the simplest and most effective, along with efforts to practice hygiene and distancing when possible. Officials from the president down must avoid politicizing these measures. They are neither conspiracies against your dignity nor proof of your enlightenment. They are sensible ways of reducing infection and fear.

When local hot spots arise, mayors and governors must trace the outbreaks to their origin and be ready to curtail specific activities that are sources of spread. The public is clearly willing to follow focused guidance. But broad shutdowns are unlikely to be tolerated this summer—and therefore are unlikely to be proposed, regardless of what the epidemiology shows.

This new phase of the pandemic doesn’t pose a binary choice for the country. It requires leaders to respond to both scientific evidence and public opinion in measured, flexible ways—to help build the patience to get through what could be a hard fall and winter.

5) It certainly looks like Houston’s reopening plans are not going as well as hoped. 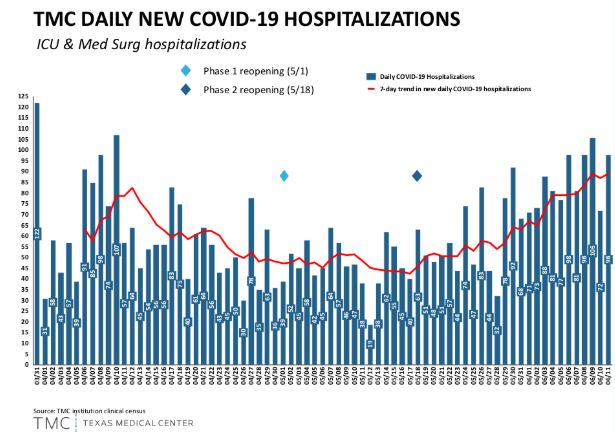 P1 reopening seemingly went well, as hospitalizations at Texas Medical center remained roughly flat for most of the month of May. But then about ten days after the P2 reopening, hospitalizations started to meaningfully tick upwards.

Given my knowledge of the progression of the disease, this would make sense, as it takes five days before one starts showing symptoms. Then it would take a few more days before we would see infected people going to the hospital.

6) I found this analysis about clusters in Japan fascinating. And it provided some great rules to follow for the summer. 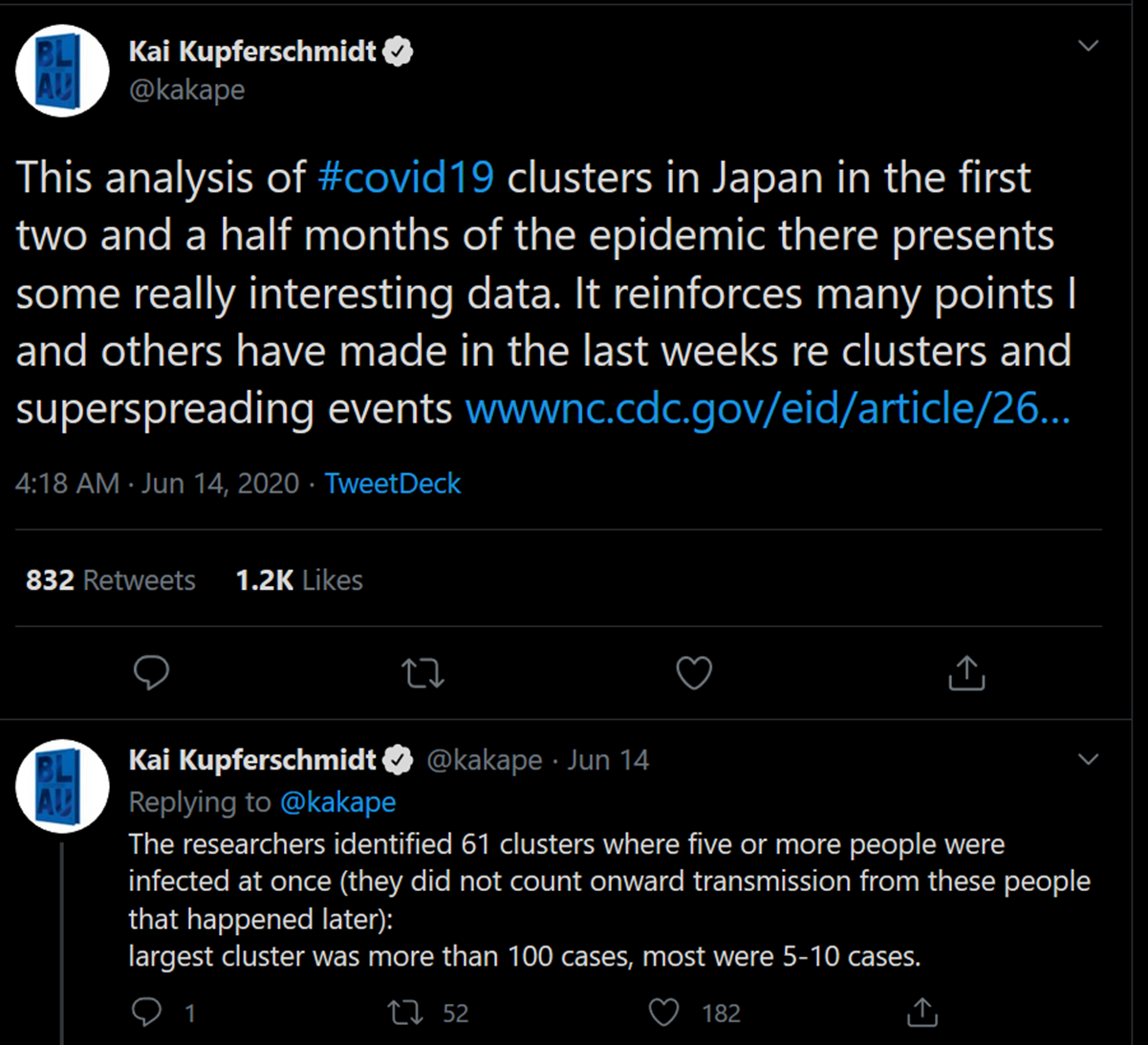 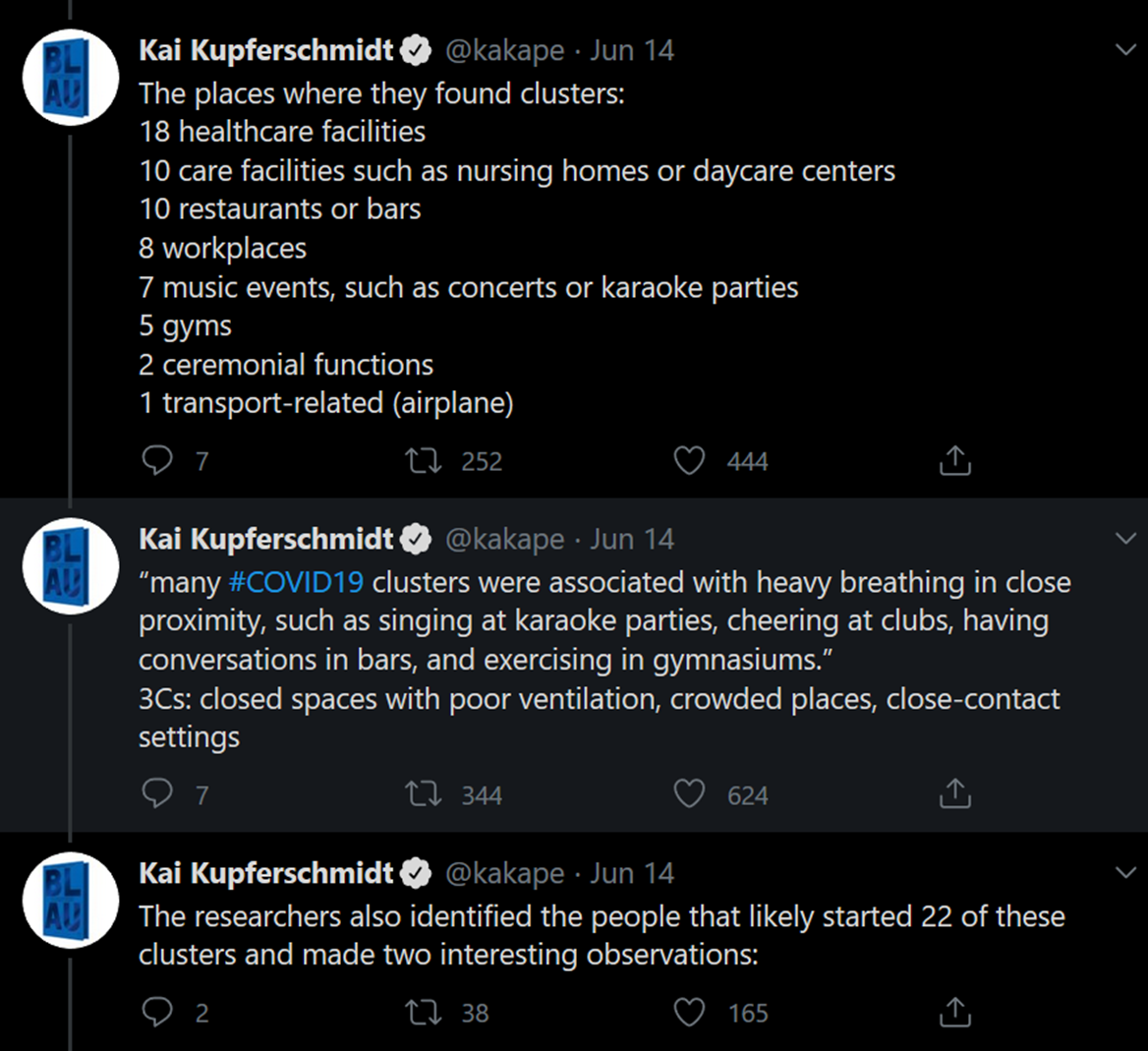 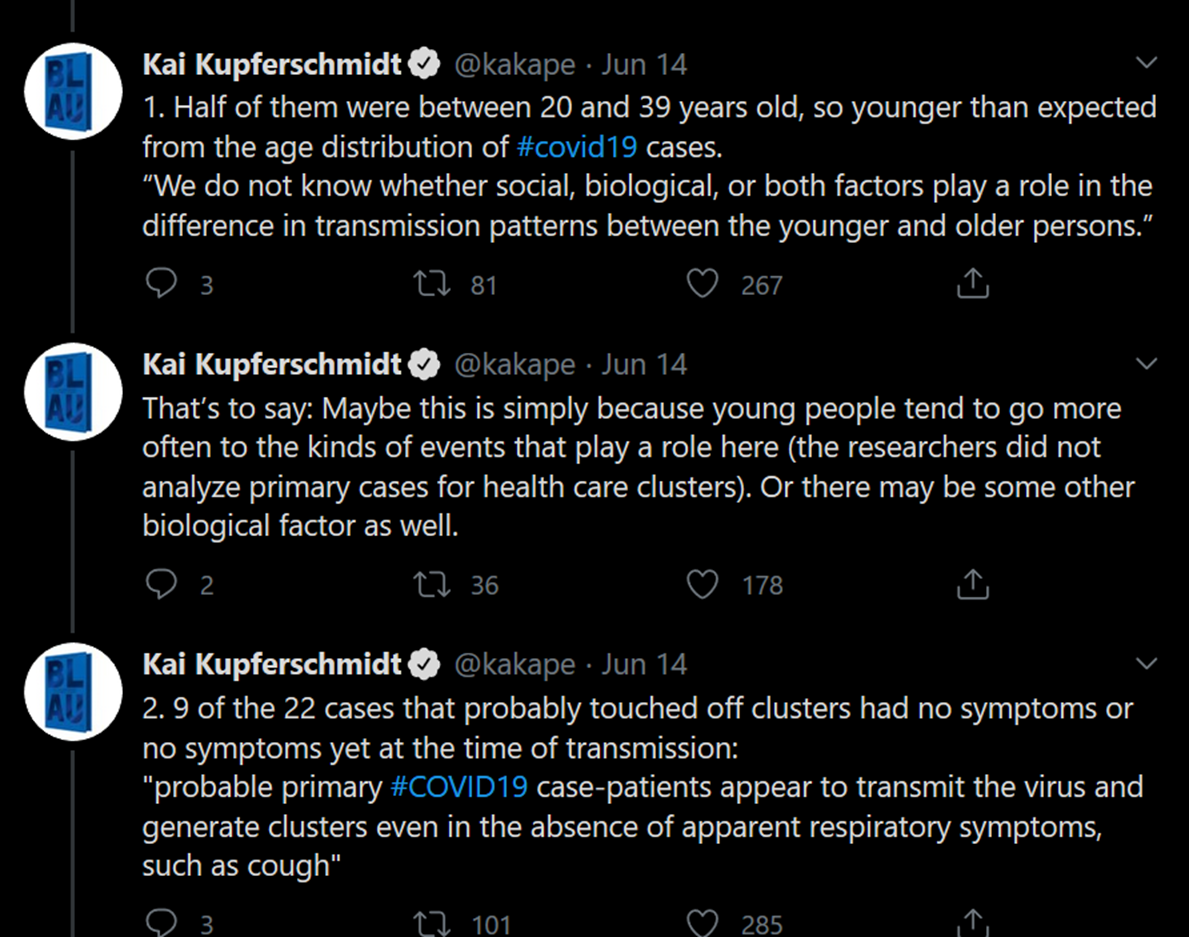 7) There’s no talk of herd immunity in China – they are looking to eradicate the virus entirely so are shutting parts of Beijing: Beijing Coronavirus Outbreak Tied to Huge Market Sparks Resurgence Concerns. Excerpt:

The new outbreak is resurrecting coronavirus fears that had largely subsided as China moved to reopen its economy and regain a semblance of normalcy. For weeks, China’s leaders have touted the success of their strict response to the first wave of infections, which included iron-fisted lockdowns and mass testing around new clusters.

After one new cluster was discovered in late May in the city of Wuhan, where the pandemic began, local officials tested more than nine million of the city’s residents in 10 days. Another cluster discovered around the same time led to the reimposition of lockdown measures in a city in the northeastern province of Jilin.