I took my first flight in three months this morning, flying JetBlue (JBLU) from JFK. While I didn’t love the idea of being in a tin can for six hours with a bunch of strangers, Yosemite beckons (see below) – and the entire experience was pleasant.

What I observed this morning was consistent with the latest data from the TSA: While “total traveler throughput” yesterday exceeded 500,000 for the first time since March 21, it was still down 81% from the day a year ago. JFK wasn’t exactly a ghost town, but it was pretty close…

My flight was a little more than half-full. I was pleased to see that everyone was wearing a mask – the few people who weren’t were quickly and politely reminded to do so.

The reason I decided to fly is because Yosemite National Park partially opened yesterday, so I can finally tackle the Nose of El Capitan, a 3,200-foot sheer granite wall that I’ve been dreaming of climbing for years.

I’ll be on a route parallel to the one Alex Honnold did in the movie Free Solo, but will be doing it with ropes and a friend who’s an experienced guide – and, I anticipate, it’ll take us four days, not the four hours it took Honnold!

I’m doing a big climb for the fifth year in a row to raise money for my favorite charity, KIPP charter schools, and to support the thousands of KIPPsters climbing the mountain to and through college.

Over the past four summers, I’ve raised nearly $400,000 by climbing five Alps giants – Mt. Blanc, the Matterhorn, Eiger, Jungfrau, and Mönch – plus Tre Cime di Lavaredo in the Dolomites (click here for pictures and descriptions of all my adventures).

But climbing the Nose of El Cap is a whole different level of challenge – like running four 24-hour races back-to-back, dangling thousands of feet in the air.

It will be very challenging for a relatively inexperienced climber (and old geezer) like me, but after five days of training in February with my friend Paul, we’re ready. I can’t wait!

I’m driving to Yosemite this evening, then we’re doing two days of warm-up/refresher training this weekend before tackling The Nose starting on Monday. My friend and Stansberry Research’s brilliant analyst Steve Sjuggerud has graciously agreed to write my daily for three days next week.

If you’d like to support my climb, here is the donation page. Even better, we’ve received a challenge grant so your donation will be matched this year, doubling your impact!

Here’s a picture of us walking toward the base of El Cap:

As we got nearer, we could see Paul’s wife, Breezy, climbing with a friend a few pitches up – you get a sense of how massive El Cap is by the tiny specks that they are (circled):

Here we are at the base, ready to go! 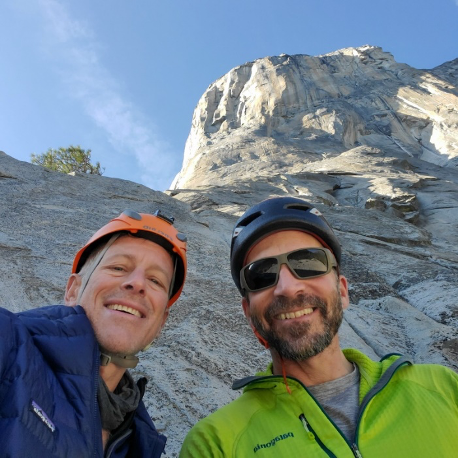 Here’s a picture of Paul leading a pitch:

Here I am, coming up behind him, using “ascenders” to pull myself up the rope that Paul has set (the Nose is far too difficult for me to free climb, so I’m doing what’s called “aid climbing”): 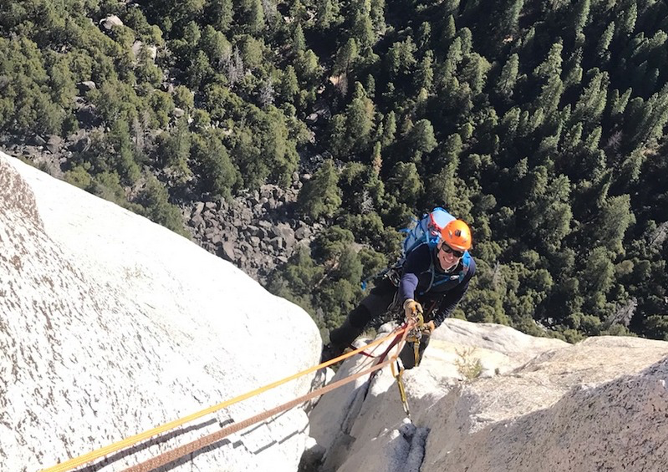 Lastly, here’s a view from the rappel down – that’s Paul circled: 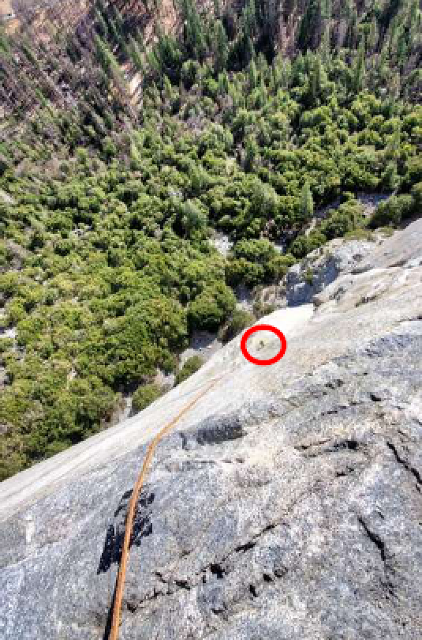