1) I’ve covered in past emails how New York’s response to the coronavirus was poor, but it was even worse than I imagined based on this story from the front page of today’s WSJ: How New York’s Coronavirus Response Made the Pandemic Worse. Excerpt:

Near the end of a decadelong economic expansion, African-Americans were finally finding some financial stability. Unemployment had reached record lows, and their wages had begun rising modestly.

…The coronavirus pandemic and shutdown brought all of that—one of the most promising economies in recent memory for African-Americans—to a crushing end.

…The black unemployment rate, which at 5.8% in February was near the lowest since records began in 1972, tripled to 16.8% in May, according to the Labor Department.

Even when unemployment was low, African-Americans’ overall economic situation was fragile. As a group, they had less job security and wealth than whites, leaving them especially vulnerable when the economy shut down. That now weighs on their prospects as the steepest economic contraction since the 1930s shows signs of turning. Historically, African-Americans’ recovery from recessions has been much slower than those of other groups.

The disease itself also hit African-Americans harder, medically and financially, in part because of longstanding inequities such as a lack of access to medical care and disproportionate representation in less secure low-wage jobs, said Bradley Hardy, an economist at American University. “These protests are also a response to broader insecurity in these communities,” he said.

3) The severe economic damage is leading many to say that we over-reacted. This may be true in some limited areas, but overall I think we did what we had to in order to head off a far worse calamity, as this article argues: No, the lockdowns weren’t an overreaction. Excerpt:

From the beginning of the pandemic, many conservatives have argued that the lockdowns were an overreaction to the novel coronavirus and that they are causing unnecessary economic pain. Recent studies, however, show that this argument is wrong.

Lockdowns and other measures to inhibit the spread of covid-19 likely saved hundreds of thousands of lives in the United States alone. We know this because of the way the virus spreads exponentially. Without lockdowns and other measures, every infected person would come into contact with a large number of uninfected people every day. A certain percentage of those people would contract the disease and would then further spread the disease to other uninfected people. Left unchecked, diseases such as covid-19 become like a raging wildfire, burning everything in their path.

…The most relevant study, from researchers at the University of California at Berkeley, estimates that lockdowns and other measures prevented 4.8 million confirmed infections and nearly 60 million total infections in the United States. The authors don’t calculate how many lives this saved, but given the known fatality rates for covid-19, we can be sure it’s a lot. The United States has a confirmed case fatality rate of 5.58 percent. Applying that percentage to the estimated 4.8 million additional cases means that about 268,000 lives were saved by the U.S. interventions.

That result is likely an underestimate of the true number of lives saved. The United States implemented its measures early enough that its health systems were never overwhelmed like those in Italy and Spain. Spain’s confirmed case fatality rate is 9.4 percent, and Italy’s is 14.4 percent. Had the U.S. fatality rate risen to Italy’s level because of hospital overcrowding, more than 691,000 more people would have died.

4) I, and millions of other New Yorkers, have been wearing face masks out in public for months now. And I don’t think that will change any time soon.

While they can be slightly annoying, the evidence is starting to pile up that wearing masks is effective. Most recently, a new study in the UK has come out that argues that Widespread mask-wearing could prevent COVID-19 second waves. Excerpt:

The R value measures the average number of people that one infected person will pass the disease on to. An R value above 1 can lead to exponential growth.

The study found that if people wear masks whenever they are in public it is twice as effective at reducing the R value than if masks are only worn after symptoms appear.

In all scenarios the study looked at, routine face mask use by 50% or more of the population reduced COVID-19 spread to an R of less than 1.0, flattening future disease waves and allowing for less stringent lockdowns.

5) An insightful interview: Straight Answers from Top Epidemiologist Who Predicted the Pandemic. Excerpt:

We’ve been told alternatively to not wear masks, to wear masks, to stay home, and to get out and reinvigorate the economy. Hydroxychloroquine and remdesivir both got our hopes up but now have largely fizzled. We’ve heard estimates that as many as two million Americans will die and now, with 100,000 deaths, we’ve heard we’re near the end of the crisis. Is a vaccination forthcoming?  How likely we to get the disease? What exactly should we do with our aging parents who are at the most risk?

To get some clear answers, I called Michael Osterholm, PhD, MPH, an internationally known expert in infectious disease epidemiology who has advised both Democratic and Republican Presidents. I know Dr. Osterholm from the University of Minnesota (our academic partner for the first Blue Zones explorations) where he serves as the Director of the Center for Infectious Disease Research and Policy. He has also served as interim Director of the Centers for Disease Control (CDC).

In short, Dr. Osterholm is arguably one of the most dependable, non-political sources for straight answers on what COVID-19 means to us and our world in the immediate future. In his 2017 book, Deadliest Enemy, he correctly foretells a global pandemic and offers the best strategy for fighting it now and avoiding it in the future.

Here are the highlights of our conversation. But if you really want to understand this disease, read the whole interview.  This disease may be the biggest event of our lifetimes. 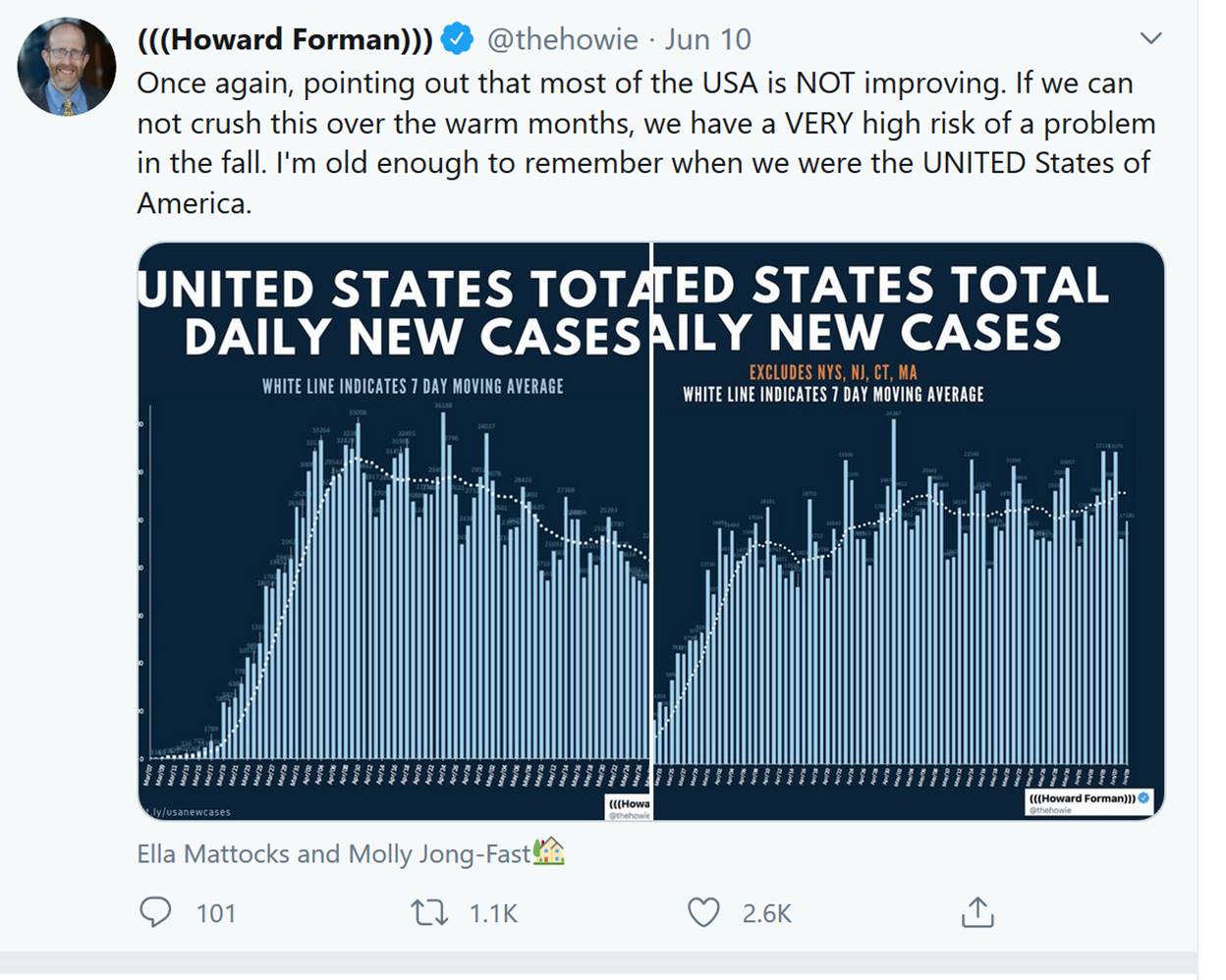 The state’s stay-at-home order ended on May 15, and its cases have increased 115 percent since then, leading a former state health chief to warn Arizona may need new social distancing measures or field hospitals.

“Since May 15, ventilated COVID-19 patients have quadrupled,” Banner Health tweeted on Monday, adding it had hit capacity for some patients needing cardiac and respiratory care.

The alert came after Arizona, New Mexico and Utah each posted rises of 40% or higher in new cases for the week ended June 7 compared with the prior seven days, joining hotpots in the South like Florida and Arkansas, according to a Reuters analysis.

And a University of Arizona doctor: People not wearing masks is a factor in state’s spike in coronavirus cases. Excerpt:

One reason for Arizona’s recent rise in Covid-19 cases and hospitalizations is that many people in the state are not wearing masks, Marvasti said on “Power Lunch.”

“Most folks have been out and about in closed spaces, including nightclubs, bars, malls, restaurants, without any mask wearing, and I think that’s a big contributor to what’s going on,” Marvasti said. “This idea that we can just kind of go back to normal prematurely has been a big issue.”

Daily cases in Arizona have been rising in the last two weeks at a pace that exceeds increased testing capacity, Marvasti said. On Wednesday, it reported 1,296 new cases of Covid-19, according to the Arizona Department of Health Services. Its largest daily case increase came on June 4, when 1,663 new infections were reported. 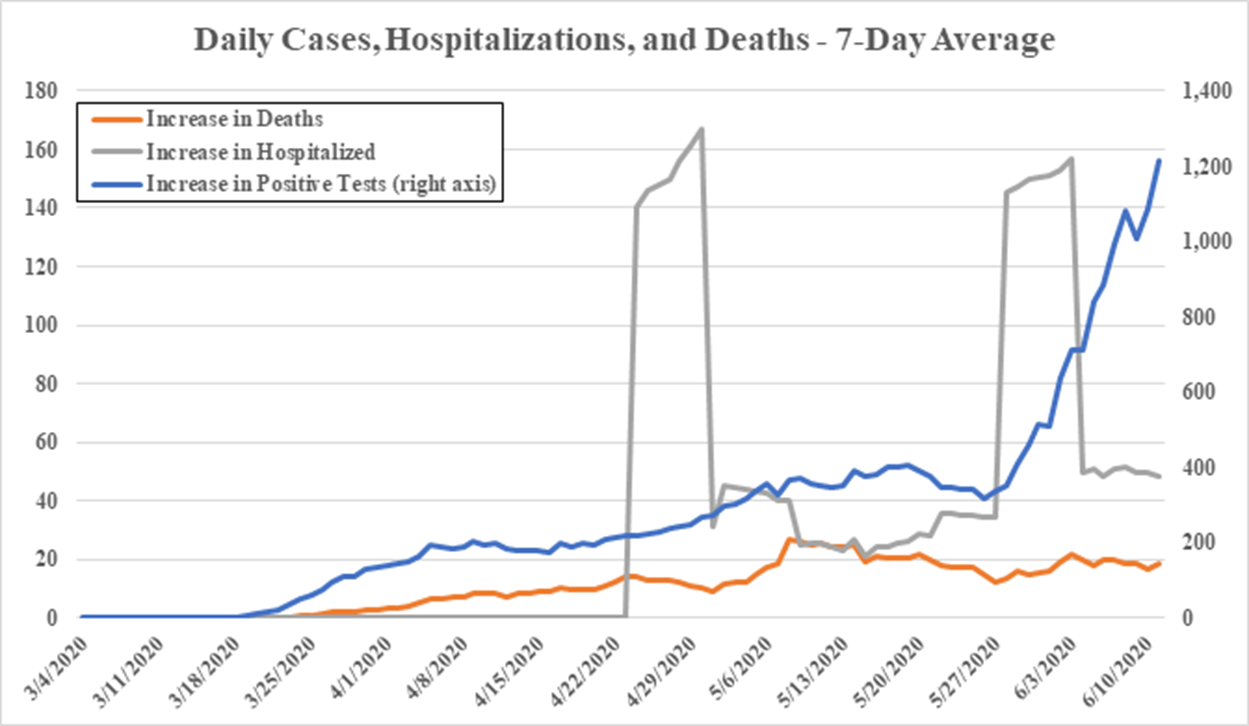 While the spike in new cases is concerning, we do have to check that this is not just AZ ramping testing capacity. This is part of the story, but it’s also due to the increase in % of positive tests: 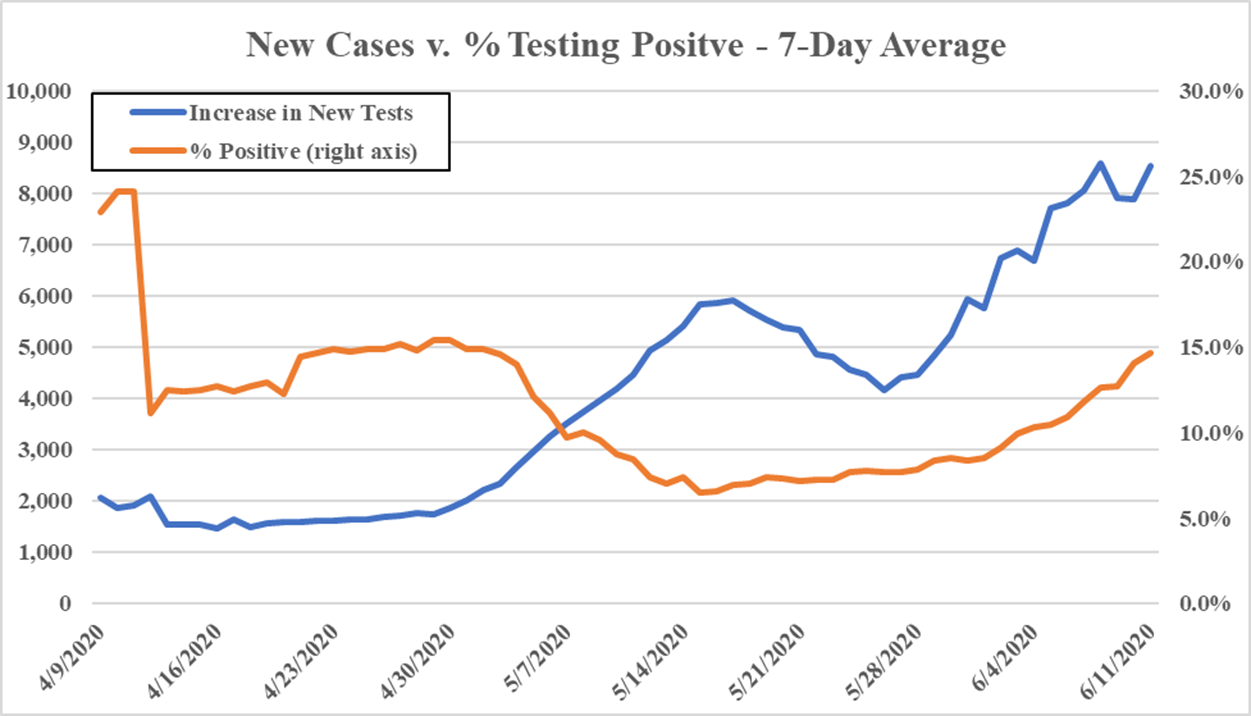 And I think this is really why officials are getting concerned: 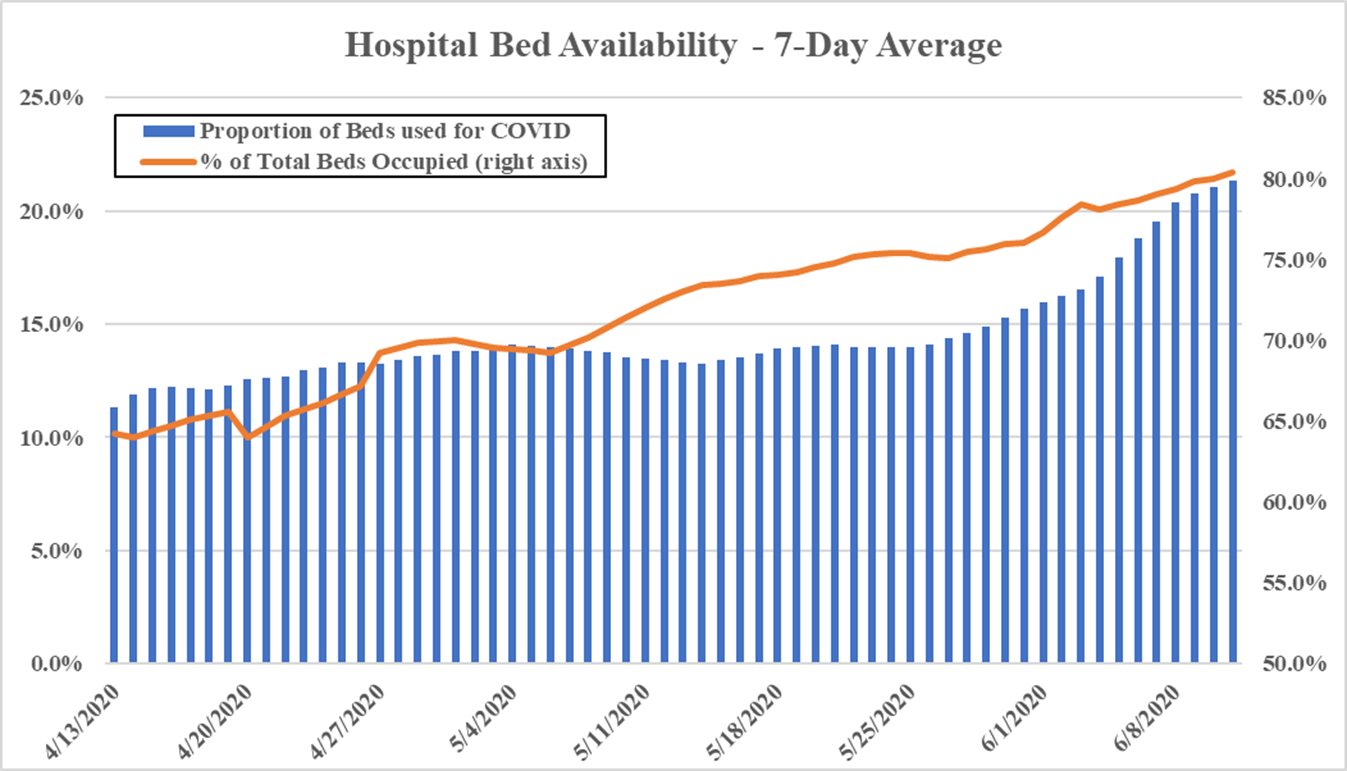 New cases, beds in use, and the proportion of beds occupied by COVID patients have all increased rapidly since Memorial Day weekend. 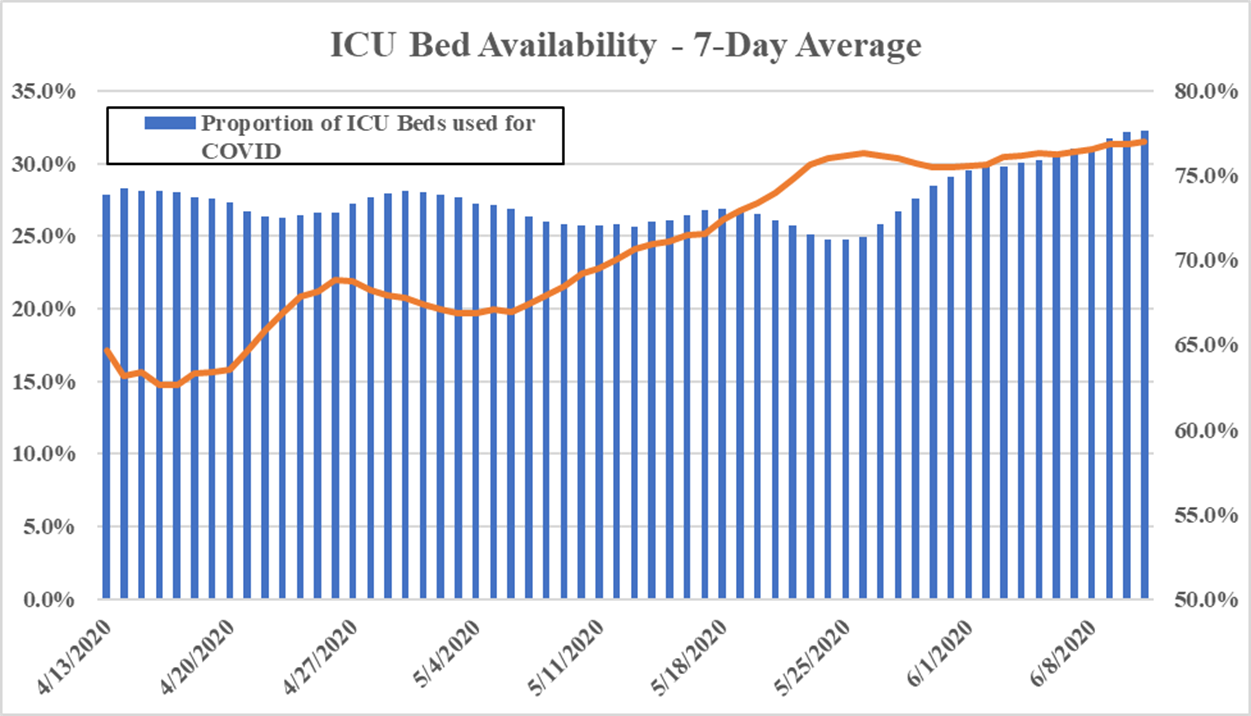 Interestingly, the IHME model thinks daily infections in AZ peaked several days ago (of course, this model has been wildly wrong):

Encouragingly, the Phoenix mayor seems to be taking the threat seriously (despite the faulty IHME model).

8) There appears to be rapid progress on developing a vaccine: Coronavirus Vaccine Candidates’ Pivotal U.S. Testing to Start This Summer. Excerpt:

Moderna’s vaccine is set to be first, starting in July, followed in August by one co-developed by Oxford University and AstraZeneca and in September by Johnson & Johnson’s, he said.

The timetable suggests researchers are making relatively rapid progress advancing their vaccines through earlier stages of testing—focused on whether they are safe and induce the desired immune response—to at least merit the planning.

“We will want to use the investigative resources of the country as best we can to optimize us getting an answer as quickly as possible,” said Larry Corey, a vaccine and infectious-disease specialist at the Fred Hutchinson Cancer Research Center in Seattle and member of a committee advising the National Institutes of Health on the design of the coronavirus-vaccine trials.

9) And we may have an antibody treatment on the way too! US human trials begin for first antibody cocktail that might treat and prevent Covid-19. Excerpt:

“We have created a unique anti-viral antibody cocktail with the potential both to prevent and treat infection, and also to preempt viral ‘escape,’ a critical precaution in the midst of an ongoing global pandemic,” Dr. George Yancopoulos, co-founder, president and chief scientific officer at Regeneron, said in a press release. “Ultimately, the world needs multiple solutions, and the innovative biopharma industry is collectively working hard to help as many people as possible with a variety of complementary approaches.”

Antibodies are proteins the body naturally makes to protect the body from a threat like Covid-19. To make what’s called monoclonal antibodies for an antibody cocktail, scientists comb through thousands of antibodies to figure out which ones fight the novel coronavirus most effectively.

In this case, Regeneron’s scientists picked two antibodies, scaled them up and put them into a medicine that it hopes can be used to treat symptoms or and as protection for vulnerable communities such as the elderly or health care workers.

But the WHO’s comment “was not correct,” said Dr. Anthony Fauci, the top infectious diseases expert in the US.

“And we know from epidemiological studies they can transmit to someone who is uninfected even when they’re without symptoms,” said Fauci, the director of the National Institute of Allergy and Infectious Diseases.

“So to make a statement to say that’s a rare event was not correct.”

And while the public might use the word “asymptomatic” to describe any infected person who doesn’t have symptoms, the bigger concern may be infection from “pre-symptomatic” carriers.