I’m fascinated by how Sweden had handled the coronavirus crisis, so this entire email focuses on this country’s experience and what we might learn from it…

While it’s the only developed country to NOT go into lockdown, Sweden did take some steps to slow the spread of the virus: shuttering a few bars, restaurants and other meeting places around outbreaks; closing secondary schools; and banning gatherings of more than 50 people. As you can see in the charts below, Sweden’s “mobility” (a proxy for social distancing and economic activity) declined a lot, but not as much as the U.S.

As a result, the country has clearly suffered higher deaths, but probably not as much economic damage as it would have had it done a full lockdown. Is that trade-off worth it? Reasonable people will surely disagree…

1) Of the top 20 countries for most coronavirus deaths per capita, Sweden comes in sixth… while the U.S. is in ninth: 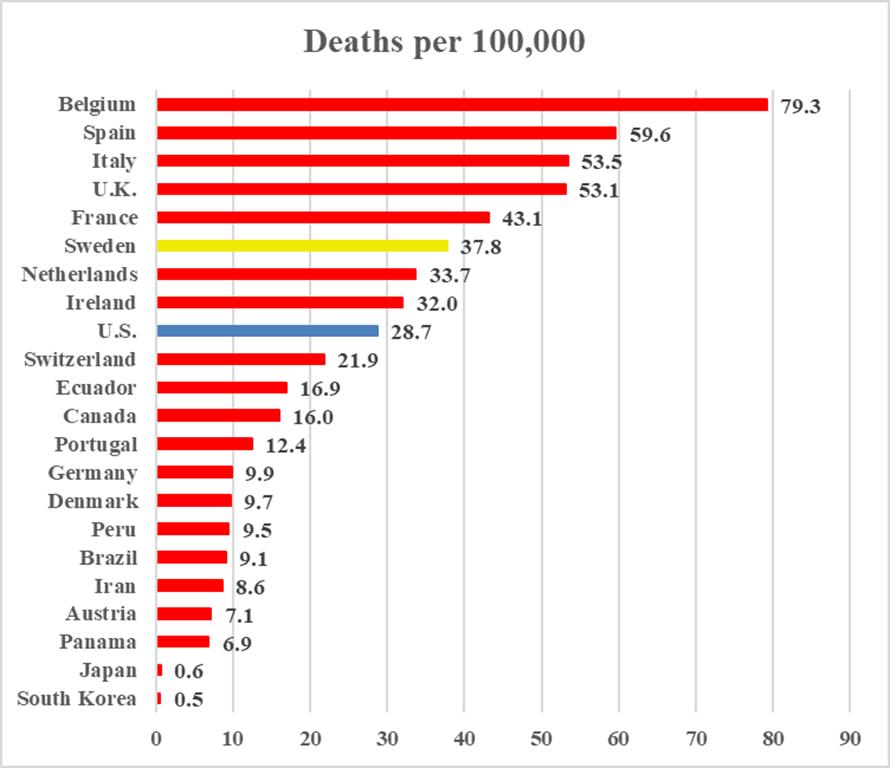 2) Those numbers are high, but Sweden has avoided a severe peak in deaths seen by its more southern European neighbors: 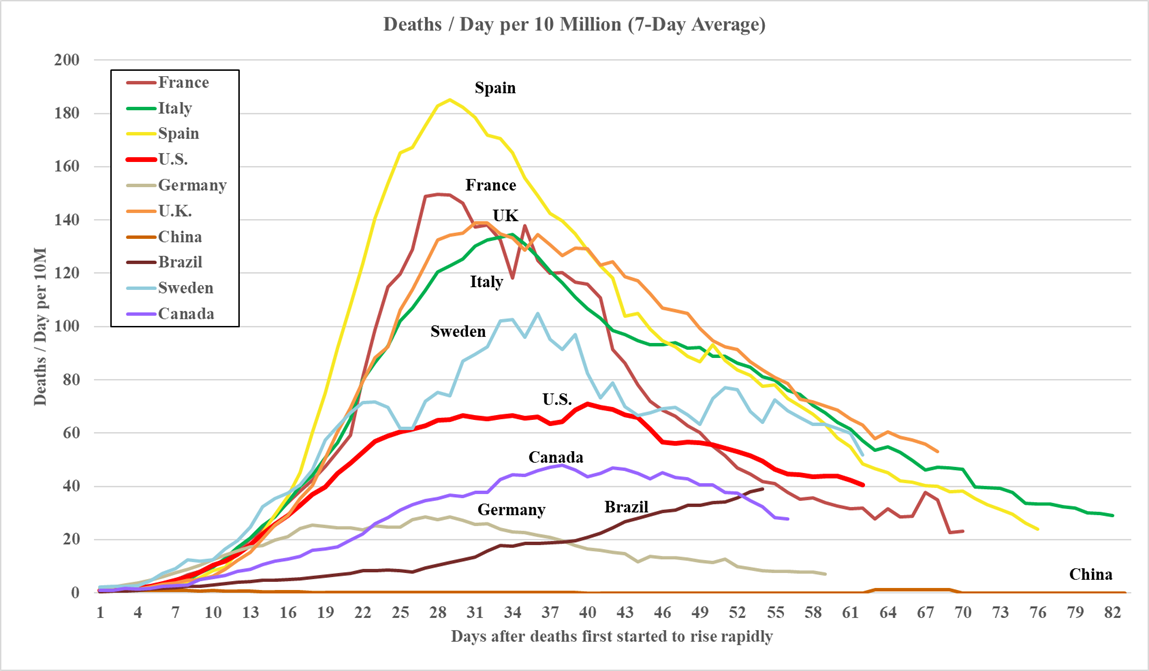 3) Looking at this chart more closely, we can see that Sweden is now tied with the UK currently for the highest deaths per day per capita in the developed world: 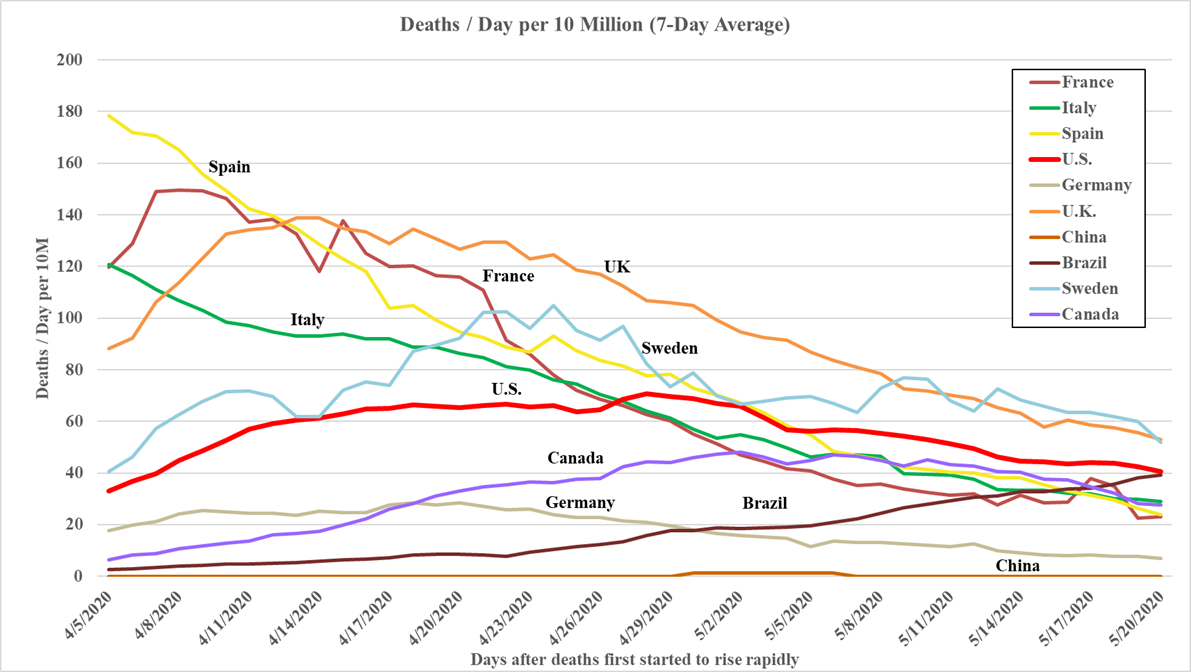 4) Ah, but maybe the payoff for Sweden is that they’re close to herd immunity? Apparently not…

While Sweden’s public health agency had expected that nearly 20% of its population to have had a antibodies by May 1, a recent antibody study (if you open it in Chrome, it will translate it for you) found just 7.3% of residents of Sweden’s densest region, Stockholm, had antibodies. This is much lower than hard-hit areas like New York City (19.9% prevalence rate), Madrid (11.3%) and Wuhan (9.6%).

While Sweden has yet to do a national serological study, here are countries that have been done so far.

Thus, it appears that Sweden is closer to herd immunity than other European countries… but still far from it…

An interesting tidbit on herd immunity: my colleague, Enrique Abeyta, found that 28% of the U.S. population was infected with the Spanish flu in 1918…

So, even if Sweden’s prevalence rate is significantly lower than 20%, then they would be far closer to the HIT than traditionally thought…

This is pure speculation. But as my analyst Alex pointed out last weekend, we are finding that the HIT could be much lower due to behavior change and different levels of susceptibility amongst people.

5) And looking at Sweden’s excess deaths… they are only 27% above normal, according to the New York Times in Sweden Stayed Open. A Deadly Month Shows the Risks. Excerpt: 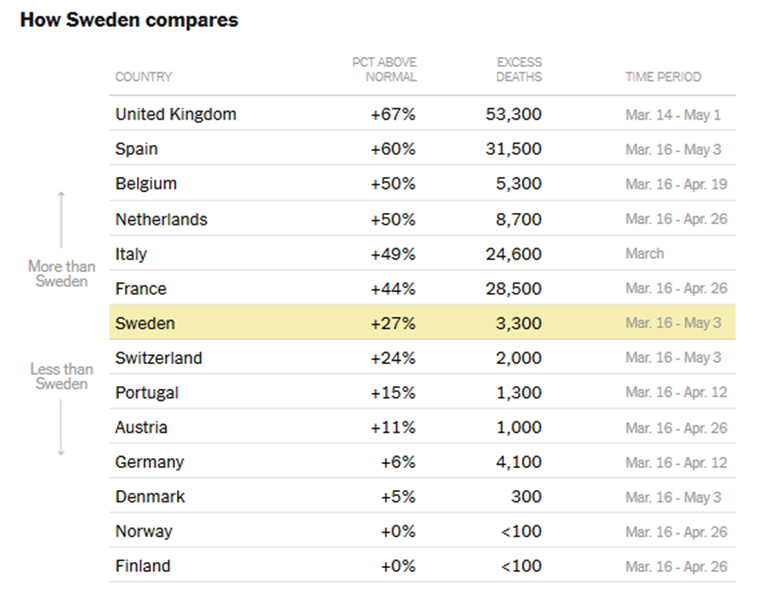 Swedish officials chose not to implement a nationwide lockdown, trusting that people would do their part to stay safe. Schools, restaurants, gyms and bars remained open, with social distancing rules enforced, while gatherings were restricted to 50 people.

Two months later, it has not been the worst-case scenario many envisioned. Covid-19 deaths have disproportionately hit the elderly and those in nursing homes, as is the case in most countries, but hospitals have not been overwhelmed. As with the rest of the world, it will be months, or even years, before the full picture of mortality emerges.

“It is clear that mortality in Stockholm has been a lot higher than you would expect from a normal year,” said Martin Kolk, a demographer at Stockholm University. “But we will have to wait and see what happens. It’s a very big difference if we continue to see excess mortality for six more months, or if it will be back to normal levels in a few weeks.”

6) With the relative success of Sweden’s policies, many are arguing that Sweden’s Coronavirus Strategy Will Soon Be the World’s. Excerpt:

Sweden’s approach to COVID-19 reflects the country’s distinctive culture, and aspects of it may not be easy to replicate elsewhere. In particular, reliance on official recommendations and individual responsibility may not travel well beyond Scandinavia. Sweden is a special country characterized by high levels of trust—not just between people but between people and government institutions. Swedes were primed to take voluntary recommendations seriously in a way that citizens of other nations may not be.

Swedes are also generally healthier than citizens of many other countries, so additional precautions may be necessary to protect the infirm in other parts of the world. Countries lifting restrictions should also learn from Sweden’s missteps when it comes to the elderly and immigrants: masks and other protective equipment should be made immediately available in nursing homes, and greater emphasis should be placed on protecting service-sector workers who are at higher risk because of age or infirmity. But the emphasis must be on helping at-risk people stay safe and out of harm’s way, not locking entire societies down.

As scientists learn more about the virus and authorities develop new and better ways to work around the contagion—altering the parameters for calculating herd immunity to account for behavioral changes, for instance—the justification for general lockdowns grows weaker and weaker. Even in places like the United States and the United Kingdom, where the pool of at-risk people is much larger, the cost of protecting these people is much lower than forcing everyone to stay home. Managing the path to herd immunity means, above all, protecting the vulnerable. Sweden learned that the hard way, but the situation there is now under control.

As the pain of national lockdowns grows intolerable and countries realize that managing—rather than defeating—the pandemic is the only realistic option, more and more of them will begin to open up. Smart social distancing to keep health-care systems from being overwhelmed, improved therapies for the afflicted, and better protections for at-risk groups can help reduce the human toll. But at the end of the day, increased—and ultimately, herd—immunity may be the only viable defense against the disease, so long as vulnerable groups are protected along the way. Whatever marks Sweden deserves for managing the pandemic, other nations are beginning to see that it is ahead of the curve.

7) Sweden’s approach has not been without flaws. There was Anger in Sweden as elderly pay price for coronavirus strategy:

It was just a few days after the ban on visits to his mother’s nursing home in the Swedish city of Uppsala, on 3 April, that Magnus Bondesson started to get worried.

“They [the home] opened up for Skype calls and that’s when I saw two employees. I didn’t see any masks and they didn’t have gloves on,” says Bondesson, a start-up founder and app developer.

“When I called again a few days later I questioned the person helping out, asking why they didn’t use face masks, and he said they were just following the guidelines.”

That same week there were numerous reports in Sweden’s national news media about just how badly the country’s nursing homes were starting to be hit by the coronavirus, with hundreds of cases confirmed at homes in Stockholm, the worst affected region, and infections in homes across the country.

Sweden is not alone in failing to protect the elderly: in Couch, Cough Cuomo and New York, recovering coronavirus patients were actually SENT to nursing homes…

Sweden will adjust a key corner of its strategy for dealing with Covid-19, after the death rate at care homes spiraled out of control.

The government of Prime Minister Stefan Lofven plans to spend about 2.2 billion kronor ($220 million) on ratcheting up staff levels to help protect the country’s oldest citizens. Another 2 billion kronor will go toward compensating local authorities for the extra costs they’ve incurred in dealing with the pandemic, the government said on Tuesday.

Governor Cuomo is effectively reversing a much-criticized policy directive that was sending seniors treated for COVID-19 back into nursing homes.

A March 25th order from the state Department of Health required all nursing homes to readmit seniors who left to be treated for coronavirus at a hospital.

Critics said that policy led to more than 5,000 deaths in nursing homes, which are regulated by the state.

Seniors are the population most vulnerable to coronavirus, accounting for the highest number of deaths.

Still, I am not sure, why ANYONE would have thought this was a good policy in the first place…

8) Even though Sweden has avoided lockdowns, mobility (a decent proxy for social distancing and economic activity) is down significantly, though less than the U.S., as you can see in these charts: 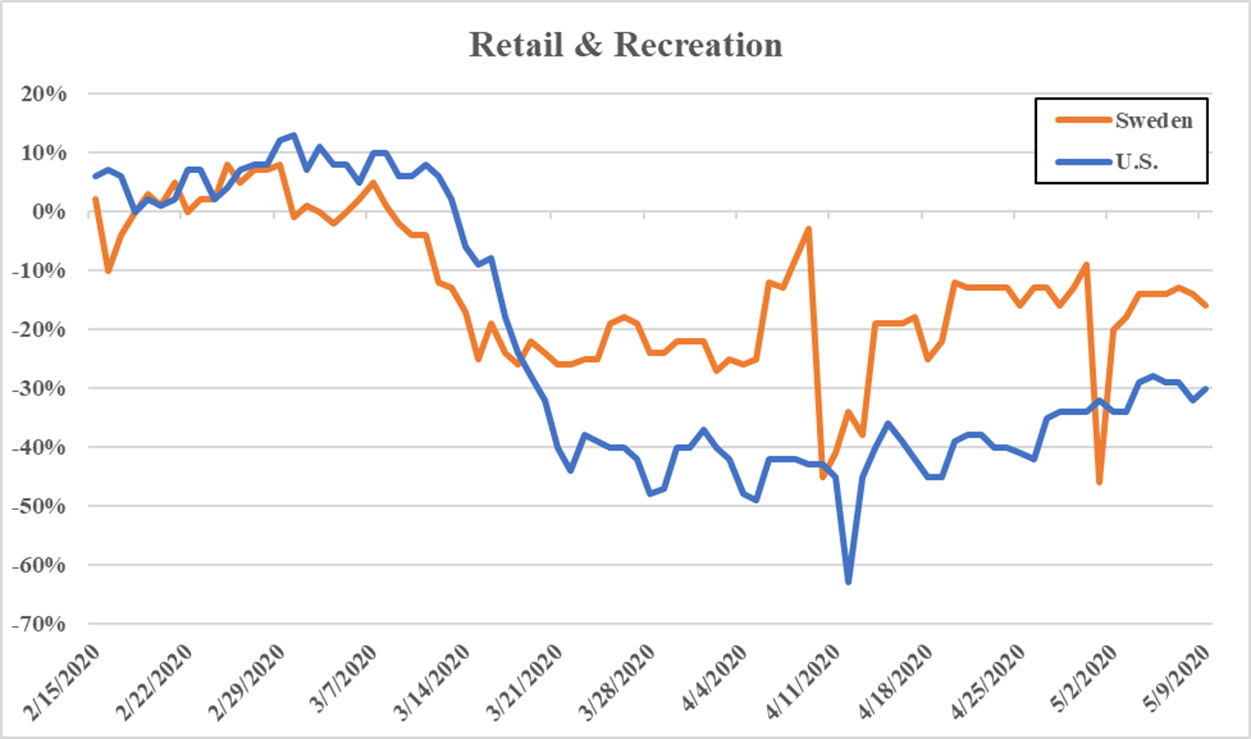 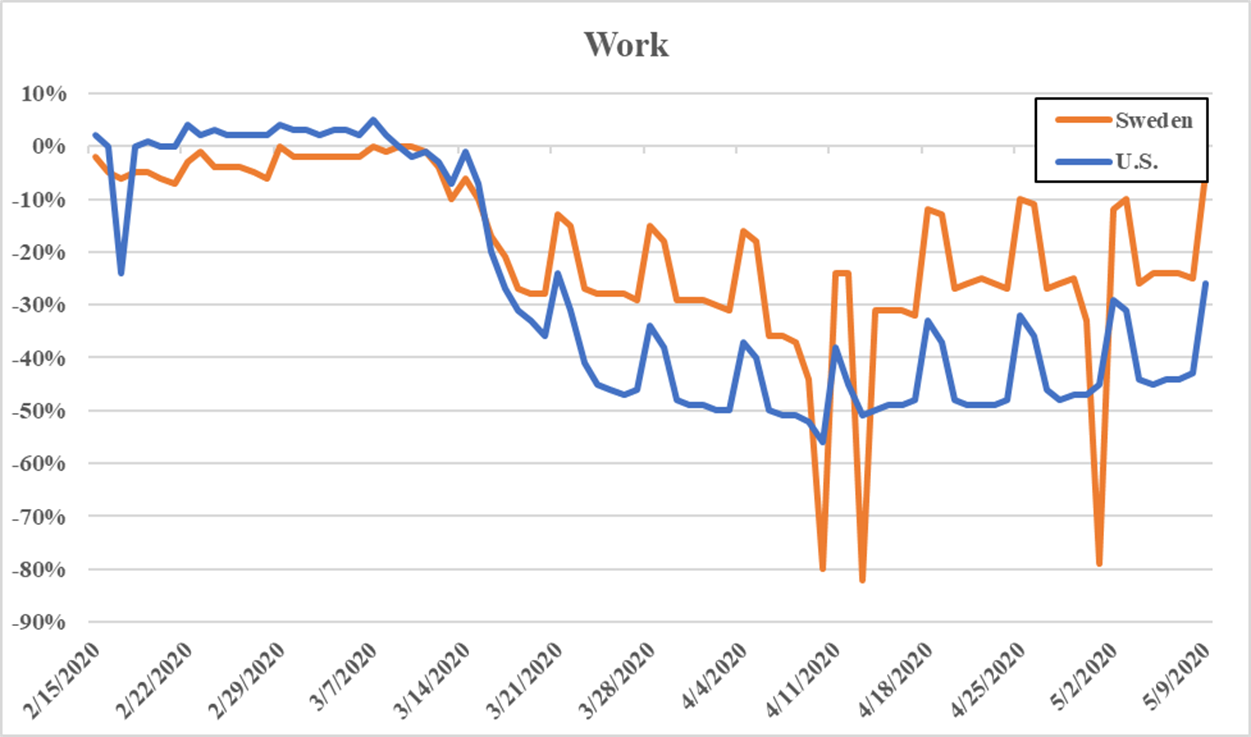 However, NYC is far below Stockholm: 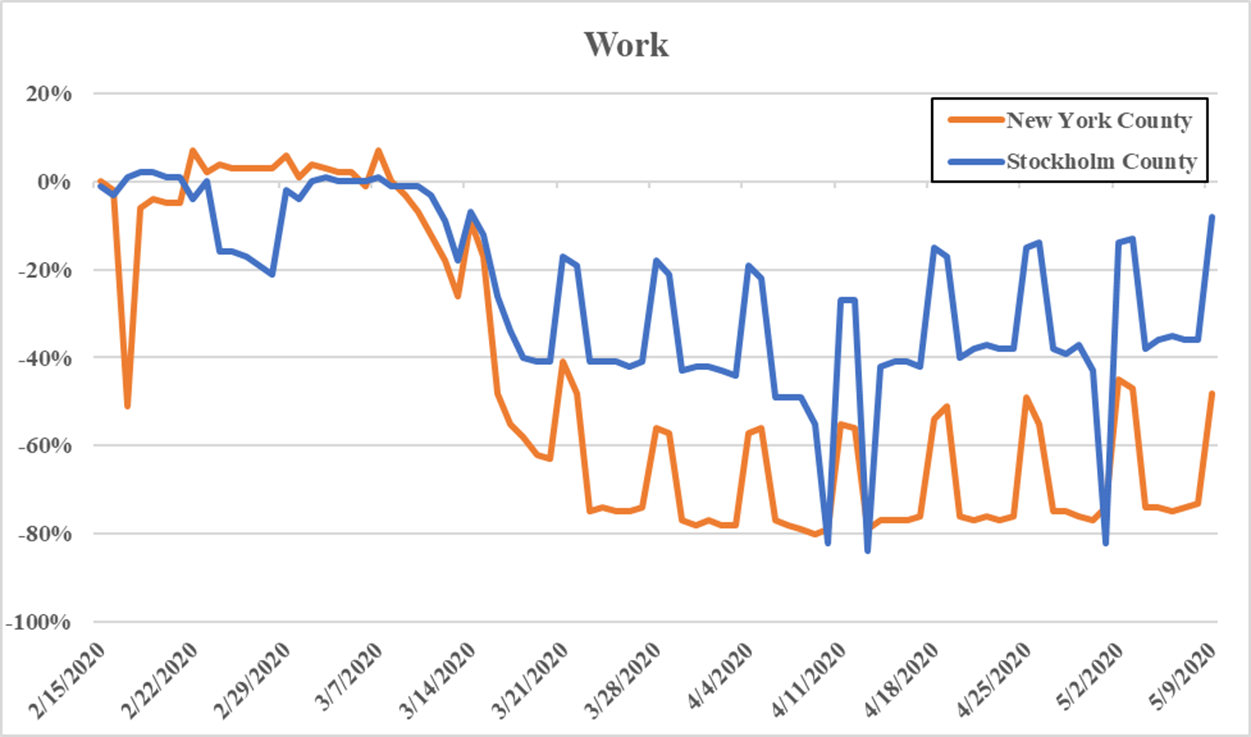 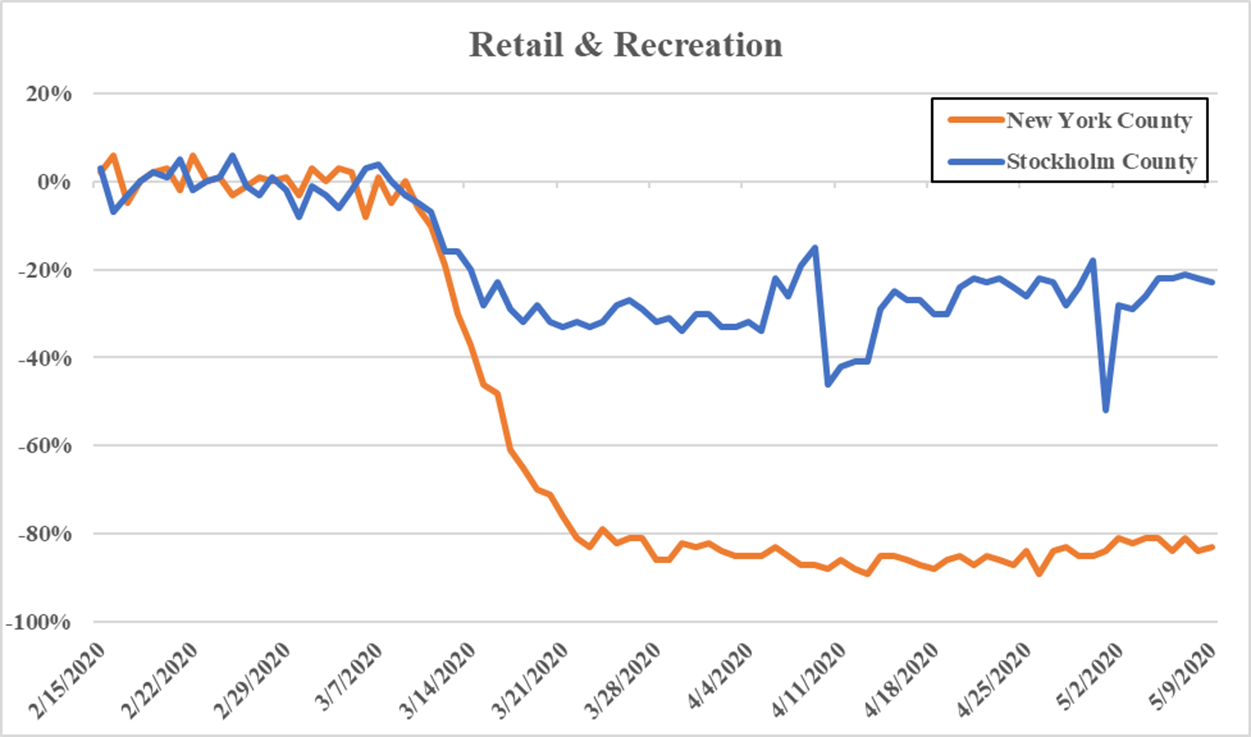 9) Though Sweden didn’t do a full lockdown, its economy still hasn’t escaped the wrath of the coronavirus. Sweden in ‘Very Deep Economic Crisis’ Despite Soft Lockdown. Excerpt:

There’s been intense speculation over Sweden’s controversial model for fighting the spread of the coronavirus. Though the country has seen considerably more Covid-19 deaths than its Nordic neighbors, some theorized it might at least suffer less economic pain. But the latest data challenge that idea.

Andersson said her country is now seeing “a very deep economic crisis.” She also said the “deep downturn in the economy is happening faster than we expected.”

Marten Bjellerup, chief economist at the debt office in Stockholm, says he thinks Sweden will fare “somewhat better” than others, but acknowledged “the difference is marginal.”

10) Here are some more articles about Sweden: