Below is an essay written by my analyst, Alex Griese, who’s in the weeds, tracking everything about the coronavirus for me and drafting many of the emails I send out…

A New Normal… For Longer

There’s been a lot of debate about how bad the coronavirus is and whether lockdowns are necessary.

And this leads to the question: when can we go back to normal?

From all I have learned about the coronavirus, I believe the following:

Part 1: How Deadly Is the Coronavirus?

To get at this question, we need to know the true case count, since the current numbers of people who’ve tested positive are only capturing a fraction of the total.

The best way to do this is to use serological studies to get at what the true numbers are – and from there, we can correctly calculate the infected fatality rate (“IFR”) (as opposed to the “case fatality rate).

There are now more than 50 SARS-CoV-2 screening studies, so I’d like to address the ones I find useful… and not so useful…

First, we must consider the sensitivity and specificity of tests. As a reminder, here are the definitions of both:

We can use Bayes’ Theorem to get a sense of what the implications of sensitivity and specificity are on results.

This chart shows the percentage of reported positives that are false positives based on two factors: the test’s sensitivity and the percent of the population being tested that is actually positive (it also assumes a specificity of 100% — i.e., there are no false negatives):

A key thing to understand is that when we’re studying a population in which only a small percentage of people are infected, the sensitivity rate matters A LOT MORE. In the chart, if only 3% of the people have the virus (about what I think the national number is here), then even with a test with 99% sensitivity will have 1/3 of positives that are false.

With this in mind, let’s look at the early Santa Clara study.

So, scientists are 95% confident that the true value lies within plus or minus 50% of our estimate… I am not going to even touch the other issues with the Santa Clara study that I have wrote about in previous emails.

So, what can we learn from studies that find these low prevalence rates? Not much, other than that a particular region is more susceptible to a future outbreak.

When we start getting prevalence rates that are greater than 5% and use a test with a high sensitivity rate (north of 95%), we start to get useful results.

The recent national study from Spain, which I believe is accurate, showed that 5% of the population was likely infected. But what was more important was the prevalence rate by region (county): 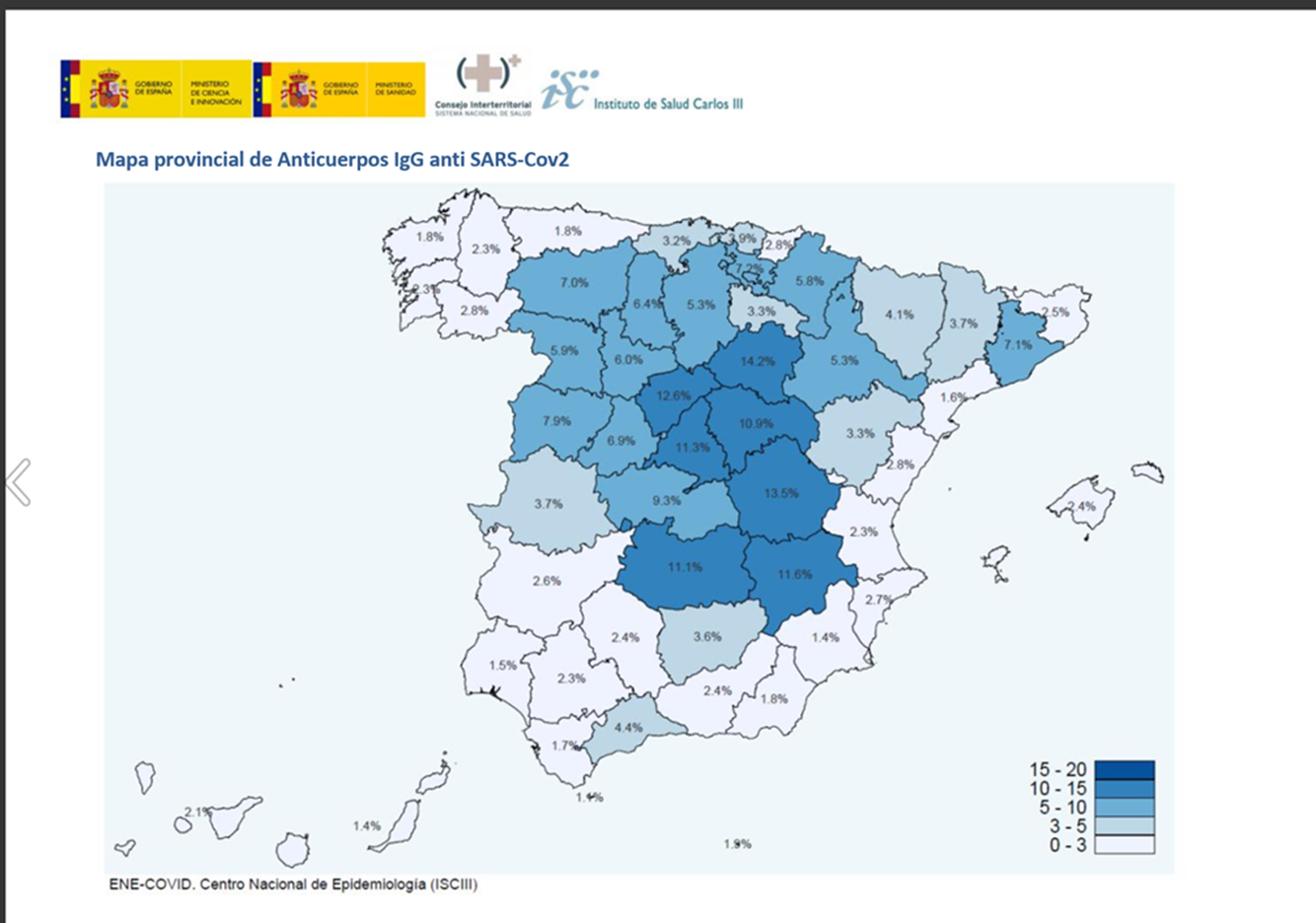 In particular, the provinces in and around Madrid have prevalence rates above 10%.

I know it is not an apples-to-apples comparison  because the Community of Madrid has 10x the square mileage. Still, both are hard-hit areas. So, the ratios between deaths per capita and prevalence rate should be somewhat similar.

I believe that these results are decent enough to start putting some rough “goal posts” around the infected fatality rate.

Now, the fatality rate could fluctuate up to 25% or 50% given how inaccurate our prevalence studies are…

Still, when we compare this to the flu’s fatality rate of 0.1%, the coronavirus is many factors higher than this.

And the flu’s fatality rate excludes asymptomatic individuals, which could be more than 50% of all cases, meaning the flu’s actual IFR might be only 0.05%.

However, I am mindful that both New York City and Madrid are hard-hit areas.

Both may have had overwhelmed healthcare systems. And we have to consider that our tools to fight the virus are also getting better.

So, the true fatality rate for COVID-19 is likely lower… but still far above the flu.

There is no doubt about it: the coronavirus is MUCH deadlier than the flu.

Part 2: Can We Get to Herd Immunity in Hard-Hit Areas?

Getting back to the important question: When can we go back to “normal”?

We could go back to normal in places with herd immunity, so let’s examine how close we are in hard-hit areas…

The herd immunity threshold has been defined as 1/(1-R0).

Remember that the R0 is the number of people each infected person infects.

With coronavirus’ R0 likely north of 2 and found to be as high as 5 or 6, this means we would need to have 50% to 85% of the population become infected to achieve herd immunity…

Unfortunately, we are nowhere near this in both NYC and Madrid or any other hard-hit area…

This paper, Individual Variation in Susceptibility or Exposure to SARS-CoV-2 Lowers Herd Immunity Threshold, hypothesizes that some people are less susceptible to getting coronavirus. If this is the case, then the prevalence rate to achieve herd immunity falls.

And we are finding that this may be true. This study, Targets of T-Cell Responses, found that some people’s immune systems may be pre-disposed to fighting SARS-CoV-2. Excerpt:

This means that even if a person does not have antibodies to this specific coronavirus (SARS-CoV-2), the virus might be similar enough to activate a T-cell (immune) response in people who have been infected with another coronavirus.

The T-cell response could be enough to provide full or partial immunity. This could explain why some individuals get severe infections, while others have mild reactions or are asymptomatic.

Another paper, Disease-induced Herd Immunity Level is Lower for COVID-19, hypothesizes that we can lower the effective R0, or Rt, via behavior change. Clearly, if people wash their hands, wear masks and practice social distancing, the rate of infection will go down.

This is also in line with the second issue raised by the first paper, i.e., that changes in behavior alter the Rt and the threshold for herd immunity.

So, have major, hard-hit metros like New York City and Madrid, achieved herd immunity? Probably not.

Are they close? Maybe. But being “close” is likely predicated on the behavior change: mask wearing, social distancing, etc. or a “new normal”.

If the herd immunity threshold is at the low end of current estimates, and people accept our “new normal”, then should we use lockdowns in the future?

Sweden is the oft-cited example of a country that has not used lockdowns. However, they also have been hit hard. Precisely how hard versus another country can be hard to quantify given differences in the way deaths are counted country-by-country.

So, the best way to see how countries have been impacted by the coronavirus is to look at overall deaths relative to normal levels, which have spiked across most of the world:

Here’s a closer look at Sweden: 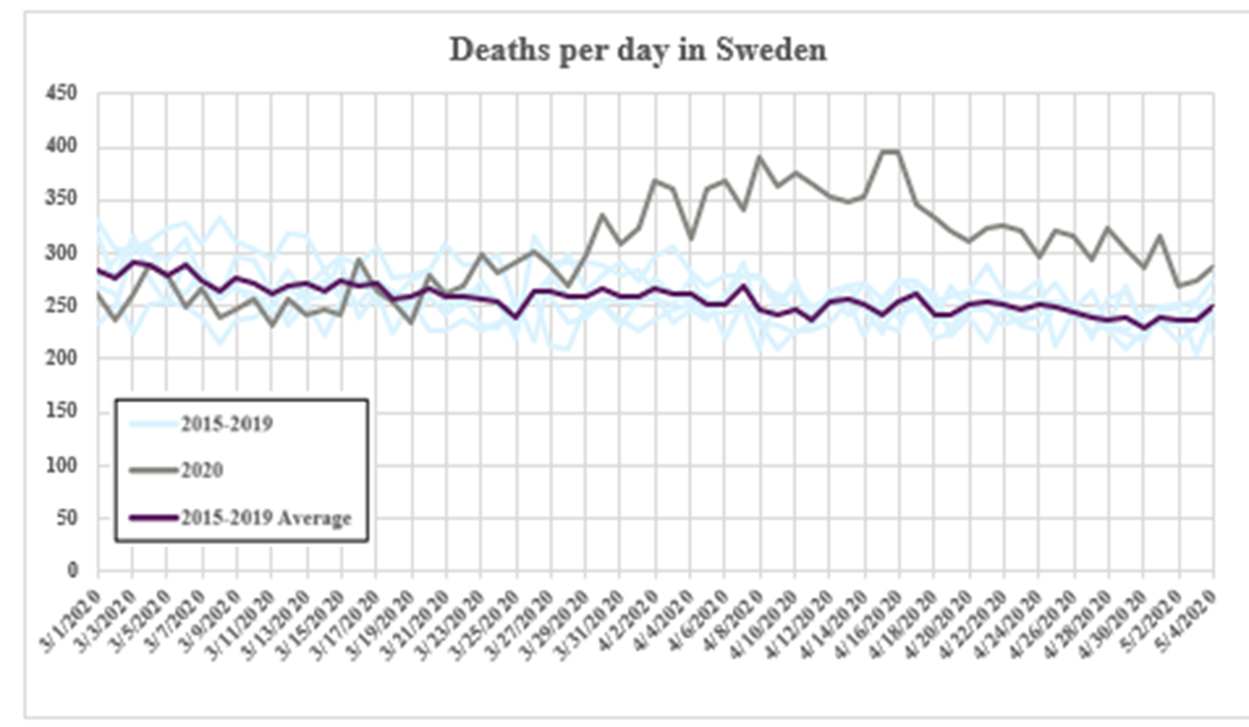 Over the last two and a half months, deaths have been 14% above trend and the virus peaked in mid-April.

While Sweden was hit harder than their Scandinavian peers, they didn’t get hit as hard as a half dozen other European countries, as you can see in this map: 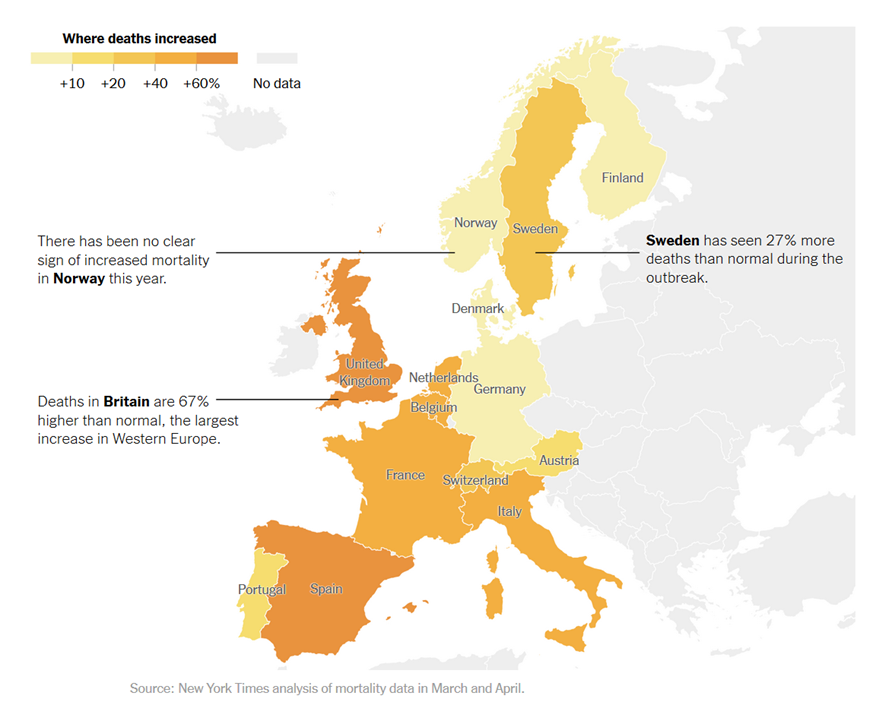 As for coronavirus-related deaths per day for 10 million of population, here’s my chart from last weekend. 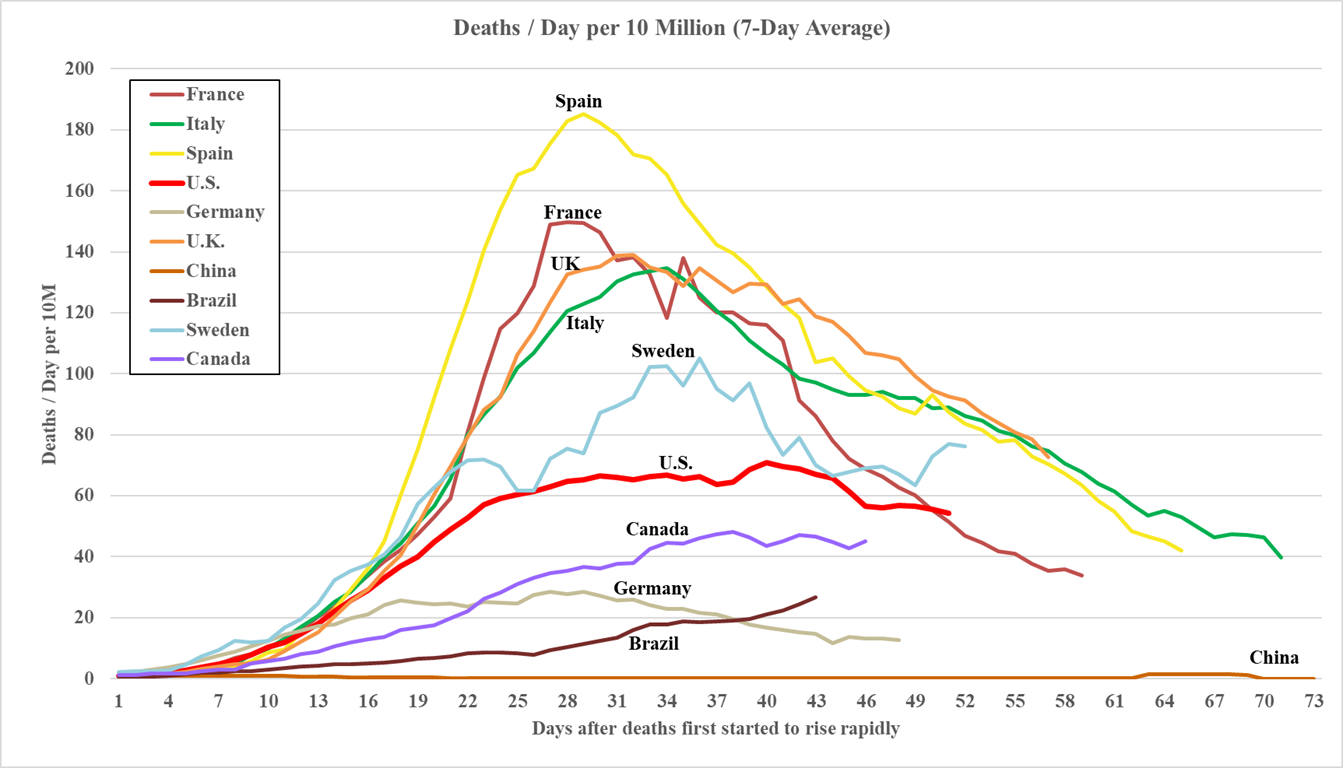 So, Sweden ended up worse-off than the U.S. but better than some other Western European countries…

So, do lockdowns work?

Of course, they work. The question is: how well, relative to the cost? People go out less and the curve gets flattened, which reduces the number of deaths due to overwhelmed hospitals in places like Spain and Italy.

But Sweden begs a different question: are lockdowns necessary? Can governments effectively inform citizens about how to protect themselves from disease? And can their citizens follow their guidelines?

In my opinion, one of the wisest things Sweden’s government has done has been to completely defer to their public health officials.

Despite many cheering Sweden’s “excellent response”, it has not been without flaws. Many elderly have died, and the government fully admits it has failed to protect the elderly.

And Sweden has not left everything open either: both high schools and colleges have closed. Nightclubs and bars near outbreaks have also been shut.

Overall, though, Swedes are happy with the response, and the country has clearly entered the “new normal”, as you can see in these charts from Google comparing Sweden and the U.S.: 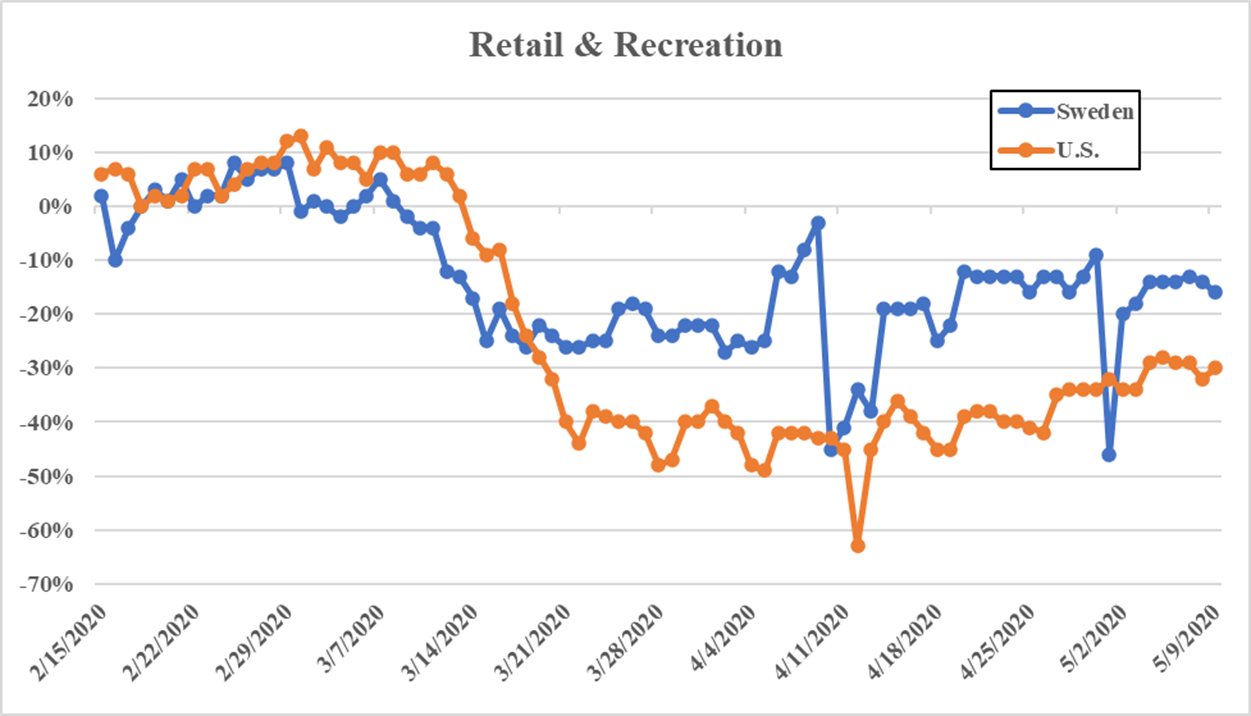 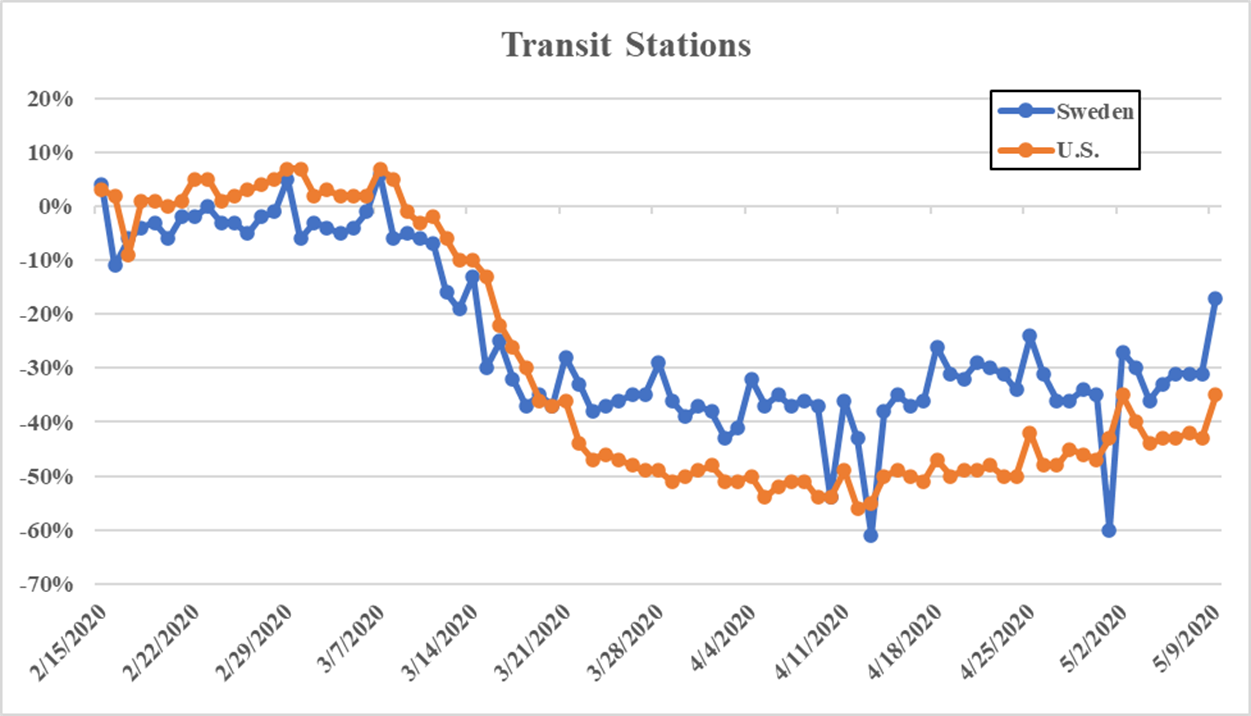 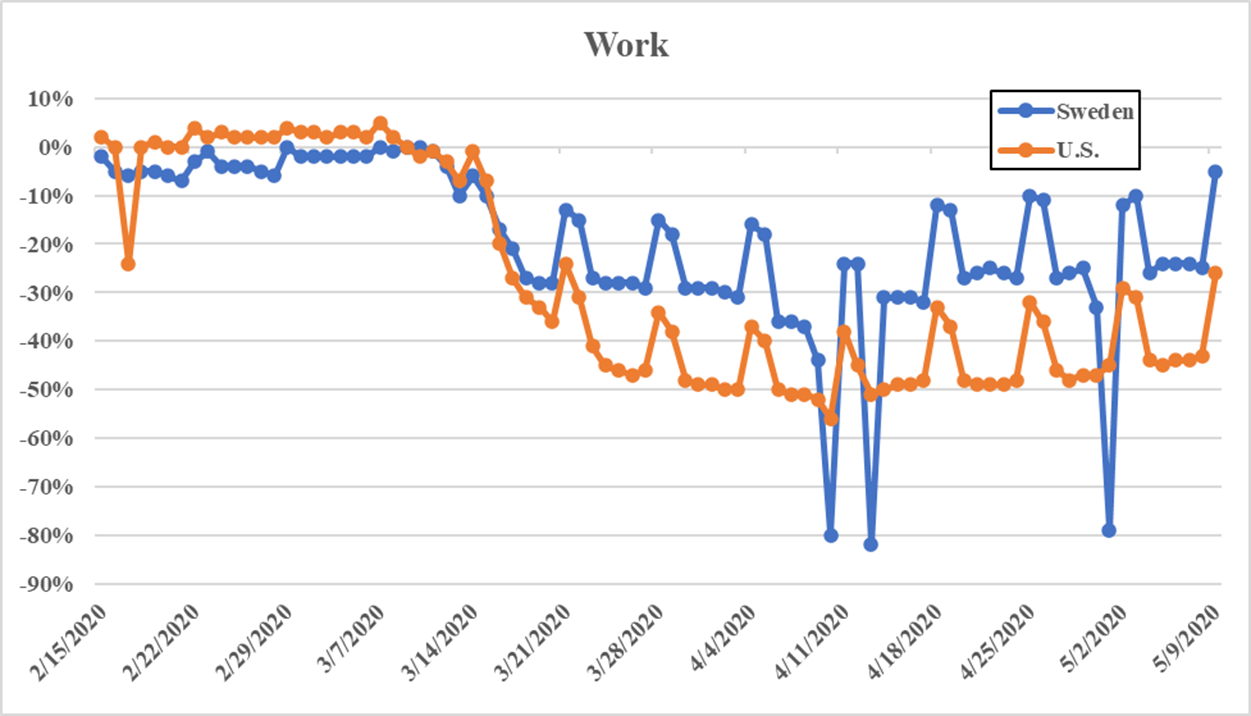 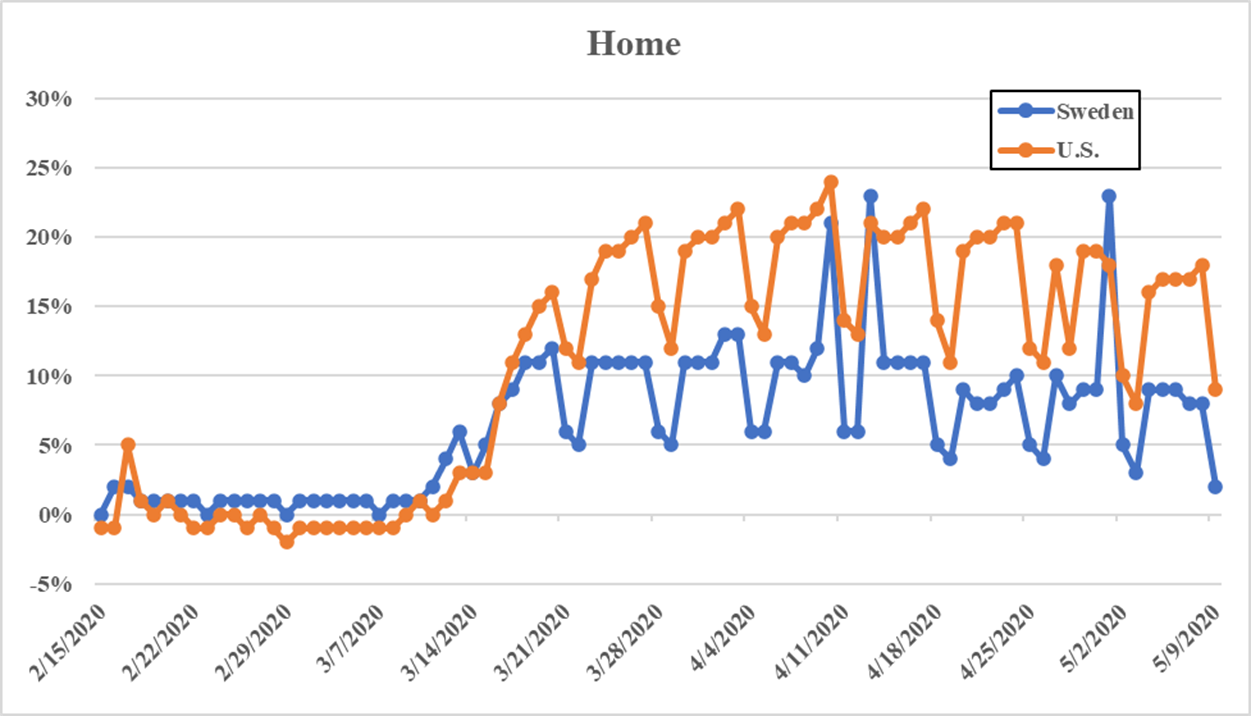 However, I’d argue that lockdowns were more necessary in America than in Sweden.

But now, most Americans understand the gravity of the situation. More than half of Americans are wearing masks in public. And most Americans want to keep social distancing protocols in place.

Because of this change in behaviors and attitude, the future Rt here is now much lower. With that, outbreaks should be slower to expand than what we saw in New York City.

And we are getting at better at treating the disease with drugs and keeping the max number of patients off ventilators.

So, with Americans now more vigilant and alert to the situation, the need for future lockdowns is greatly reduced…

We know how to fight the virus.

But testing is still lacking. 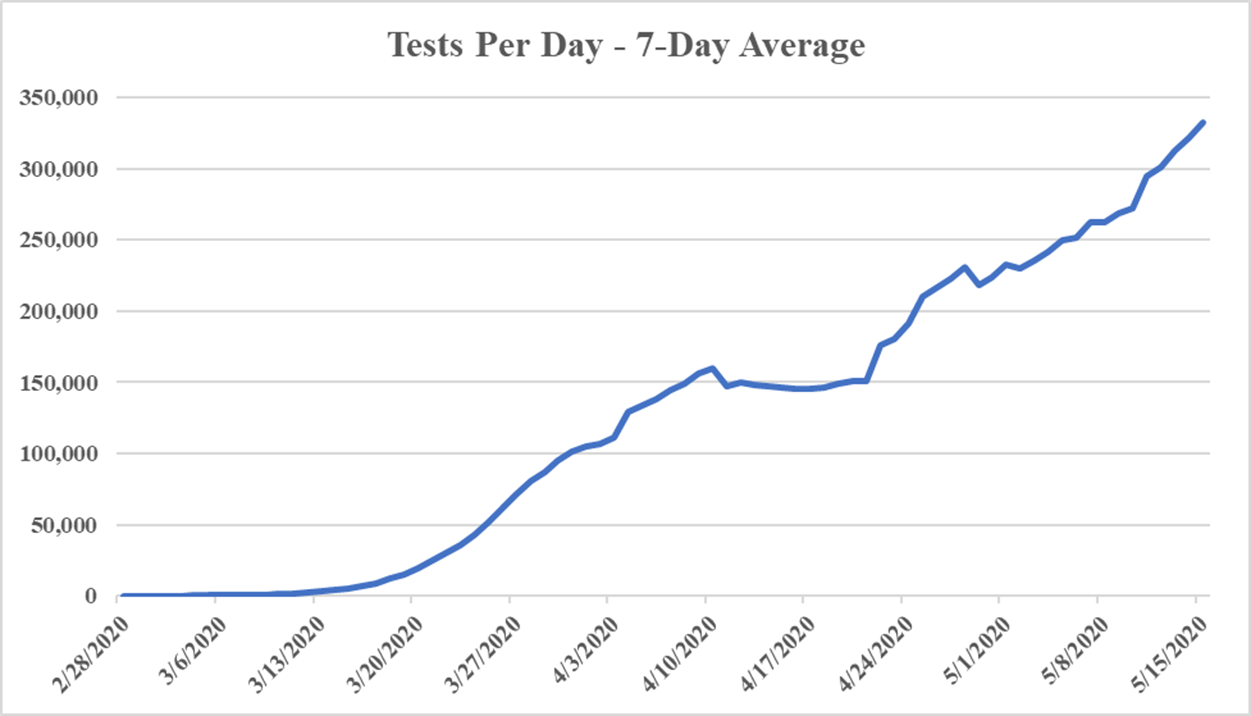 So we’re not quite there on testing, yet we continue to reopen.

I’m crossing my fingers that this works out okay, because most people will continue to stick to the “new normal” – for example, as I showed in my case study about Georgia the other day. Mobility data remains way below trend, despite the reopening of the state over three weeks ago.

So, I think the risk of another New York City is much lower in this “new normal”. And because of that, it is unlikely that in “the new normal” that we need further lockdowns.

Welcome to our new “normal.”