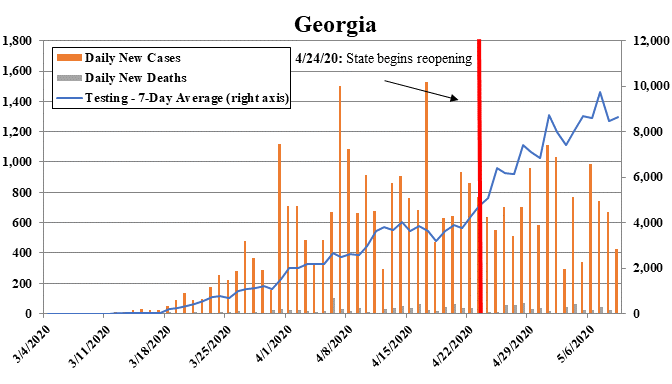 The trends are surprisingly good!

Despite a ~50% increase in testing, daily new cases (positive tests) are flat to declining over the last week, meaning the percent positive is falling fast. And deaths each day are hardly noticeable on the chart – the peak over the last week is 41.

However, I’d really like to see Georgia’s testing capacity continue to improve.

We know that many public health officials would like to aim for the nation to have the capacity to do 500,000 tests per day. This represents ~0.15% of our population,

So, Georgia has some way to go on that front…

With coronavirus being so contagious and our testing up, what gives? Why aren’t cases climbing?

People are spending more time at home and less at work, despite the state removing the lockdown order, as shown by this mobility data pulled from Google: 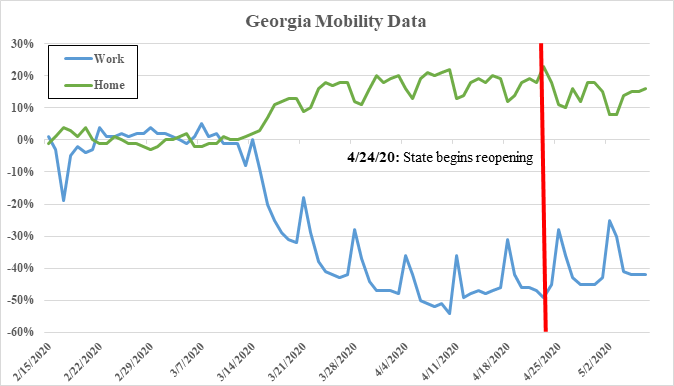 However, trips out into the world are starting to increase. Park visits are up quite a bit compared to the baseline, while grocery visits are back to normal. Retail and recreation visits continue to remain low but not as bad as in early April. 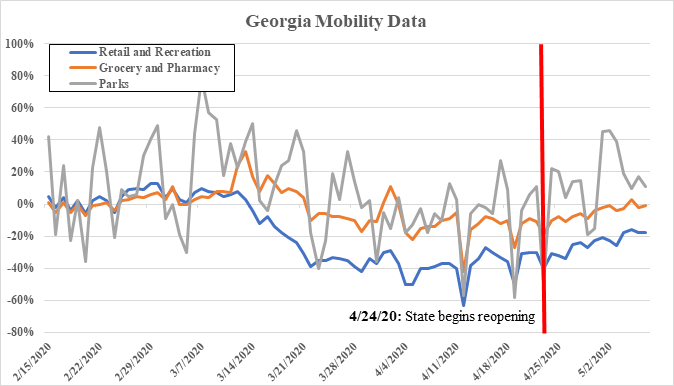 Given the data in Georgia, should we begin to adopt the same measures nationally?

I think it is 1) too early to tell and 2) re-opening should be done on a case-by-case basis. Should rural counties in many states reopen? Yes. Should NYC continue to be very careful? Likely yes…

2) Let’s dig in a bit more on the mobility data. What we know about the virus is that it spreads like crazy in closed, tight spaces (like concerts and other big events, subways, etc.), especially in areas with high population density…

So, let’s look at how mobility data compares in denser Fulton County (which includes Atlanta) vs. a more rural county like Clarke County (Athens, GA – home of UGA – is here).

If the claim that people are afraid to leave their homes is true, then we’d expect to see denser counties bounce back slowly (per 1,000 in population, there are more than 2x the number of cases in Fulton than Clarke), as can you infer from this chart: 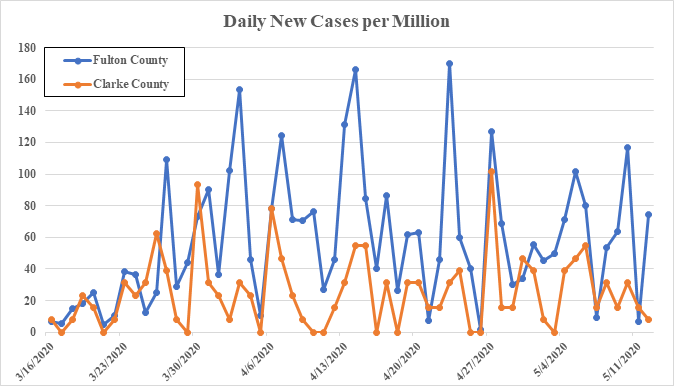 Why? Because the risk of encountering / getting to close to people is much higher in these regions. Cities are likely to have been hit much harder given what we know about the virus.

Thus, if people in both counties are rational, you’d expect those in less-dense and less-hard-hit Clarke County to return toward normal movement more quickly – and that’s exactly what we see in all areas (except, of course, “home”): 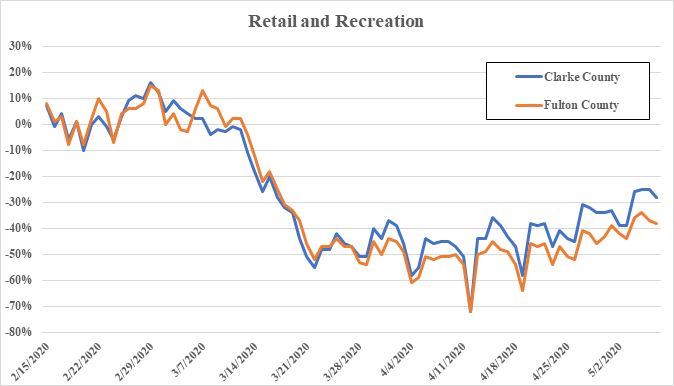 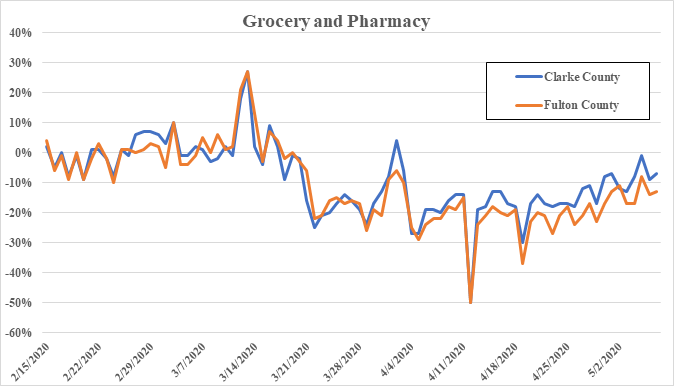 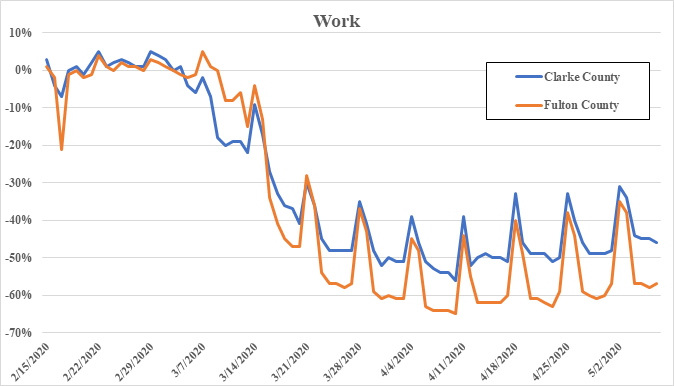 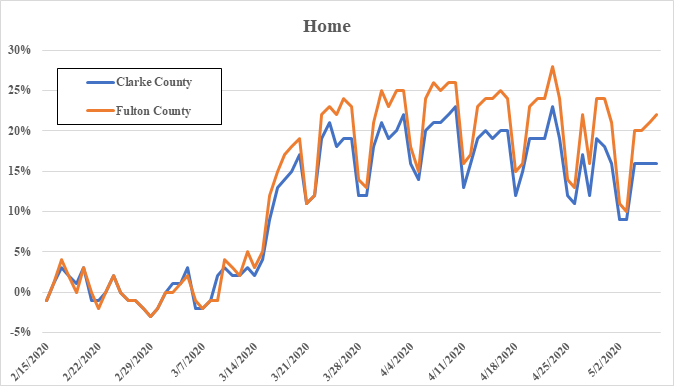 3) Now let’s take a look at Indiana: Too Many States Are Flying Blind Into Reopening. Not Indiana. Excerpt:

That, of course, would require a government that leads.

We’ve just seen that happen in Indiana. Thanks to a study done with the state’s help, we now know that it’s likely that about 2.8 percent of Hoosiers have so far been infected with this virus. It also means that the fatality rate in Indiana is about 0.6 percent, significantly higher than what we usually see for seasonal influenza.

In some ways the low number of people infected is good news. Social distancing worked. The hospitals, while strained at times, were never overwhelmed. The state was able to keep the rate of infection much lower than others, like New York. It also appears that less than half of those infected are asymptomatic. This might also account for the lower levels of spread.

In other ways, this news is troubling. Many have hoped that great numbers of Americans have been infected, but with no symptoms or very mild illness. If that were true, we might be able to get to herd immunity with relatively few bad outcomes.

And it looks like this study was done with truly random sampling and did not solely rely on antibody tests!

More than 4,600 people participated in the first wave; 1.7 percent were found to have an active infection. Serological testing, for antibodies, was positive in an additional 1.1 percent of people. That indicates that overall, 2.8 percent of people living in Indiana were infected or have recovered.

Given how many people had tested positive by the time this sampling was done, the researchers estimated this meant that about 11 times as many cases likely existed as were known.

This points to a difficult truth: Indiana, like most states, is not doing nearly enough testing. We are failing to pick up 10 out of every 11 cases. This isn’t nearly enough to do adequate contact tracing and isolation.

But we can learn other things from the study. Because the researchers now have a denominator of how many people total were likely infected, they calculated an infection fatality of 0.58 percent. This isn’t nearly as high as many have feared, but it’s not a reassuringly low number. If we achieved herd immunity through outbreaks, and somehow 70 percent of Americans, about 225 million people, were infected, more than 1.3 million people might still die. Many more would require hospitalization and intensive care.

My understanding is that the assay used for antibody tests in the Indiana study has extremely high sensitivity and specificity as compared to assays used in other serological studies, like those that resemble pregnancy tests.

This low infection rate of less than 3% is consistent with my guess that the overall infection rate, nationally, is between 2% and 3% – light years from the 70% number needed for herd immunity…

4) Spain conducted a national study that estimates that 5% of its citizens have bene infected. There are 27,321 deaths currently in Spain… This means the infection fatality rate (“IFR”) is 1.16%…

This figure is much higher than many other studies that have found the IFR to be under 0.50%.

Here are a few tables that look at the IFRs for different age groups using data from the study and national statistics on COVID-19 deaths – Spain’s population is 46.94 million.

As we already knew, the disease is far more deadly the elderly… And this study suggests that it is 5,000 times more deadly for those over 70 than for children.

I think this further supports my claim that roughly 2% to 3% of people in the U.S. have had the disease.

If this is the case, then no country is anywhere close to herd immunity. And it means we must be hyper-vigilant as we reopen.

5) The data is starting to look much better nationally, as Dr. Scott Gottlieb points out. 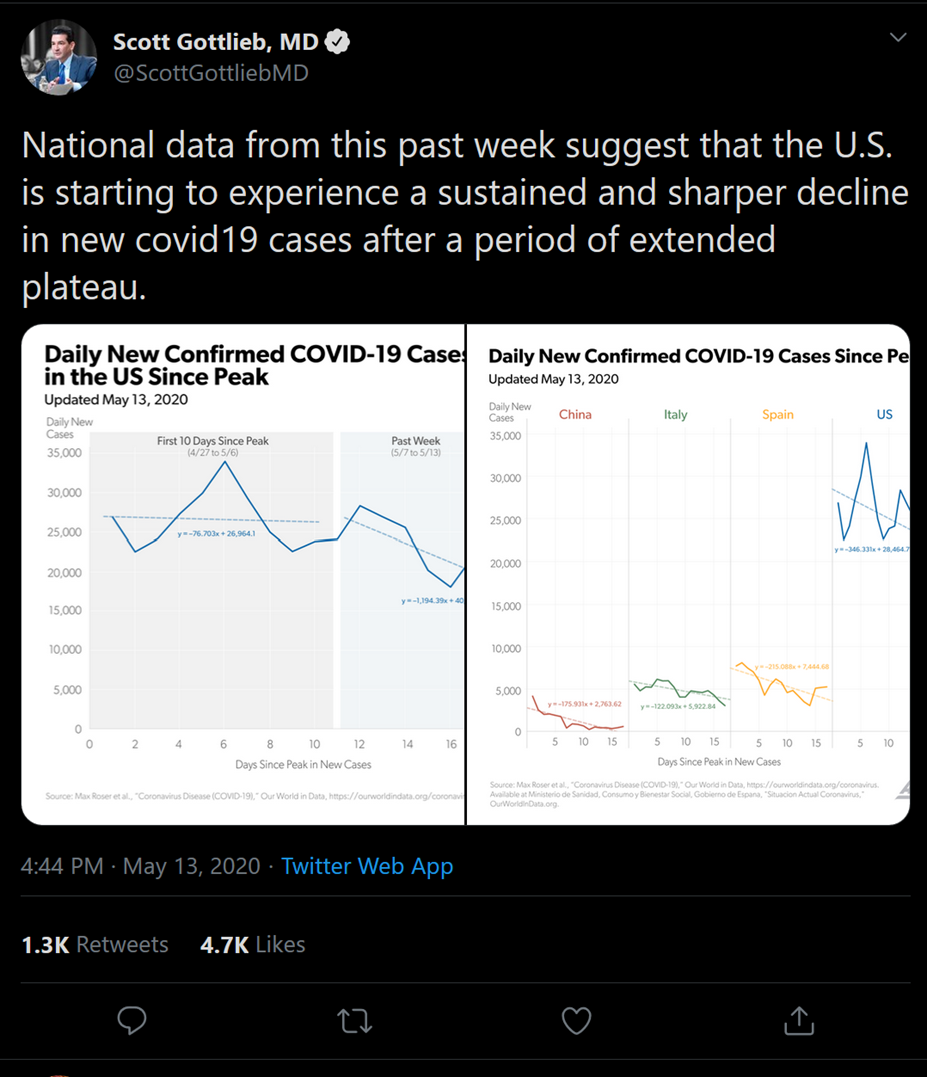 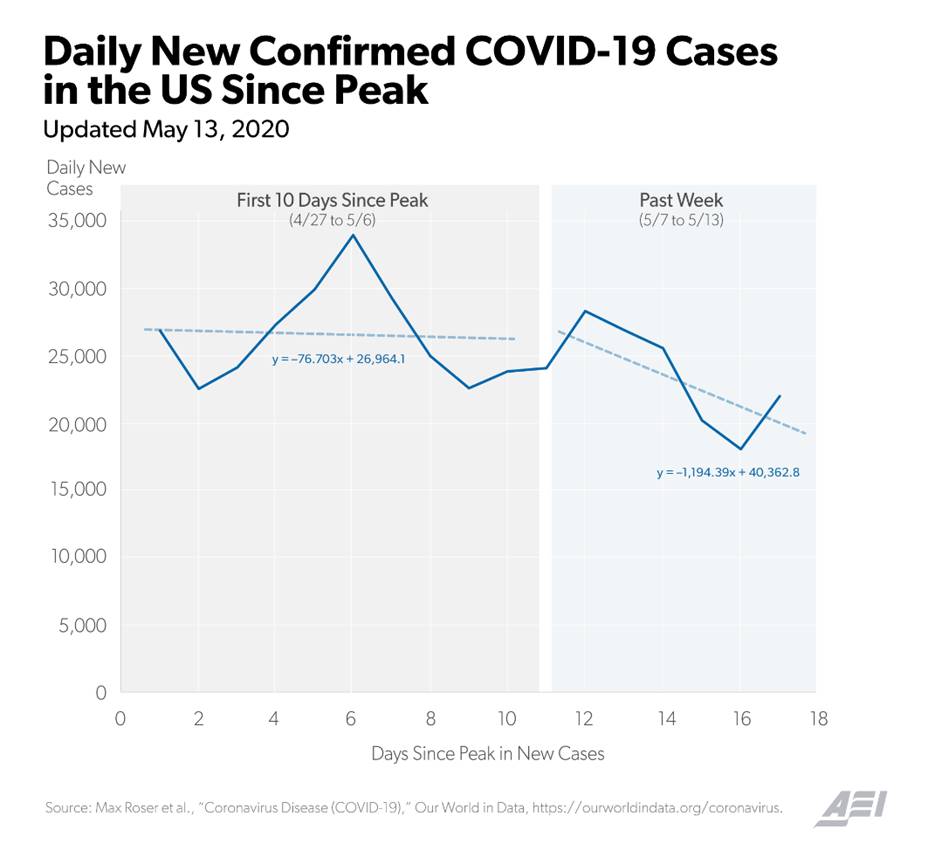 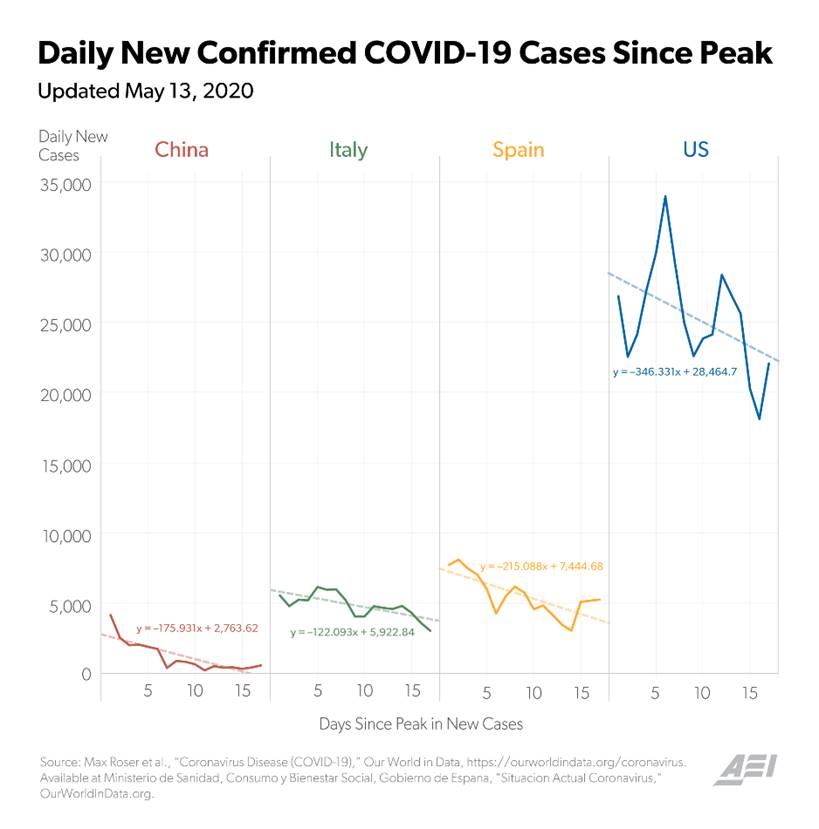 This is supportive of many states deciding to reopen.

6) The declines nationally are because social distancing does work! Thus, this is concerning: Americans’ Commitment to Social Distancing Is Eroding. Excerpt:

In states with the greatest decrease in average distance traveled per day, confirmed Covid-19 cases were more likely to stabilize or decline when plotted on a two-week lag, the maximum incubation period of the virus. New York, one of the earliest states hit, reduced its travel more than most other states and saw its daily case rate drop.

States where cases rose steadily or spiked tended to have lower rates of distancing. For example, South Dakota only reduced travel by about 28%, on average. The number of cases per day had been declining—as was distancing. Then the state experienced an increase in new cases. 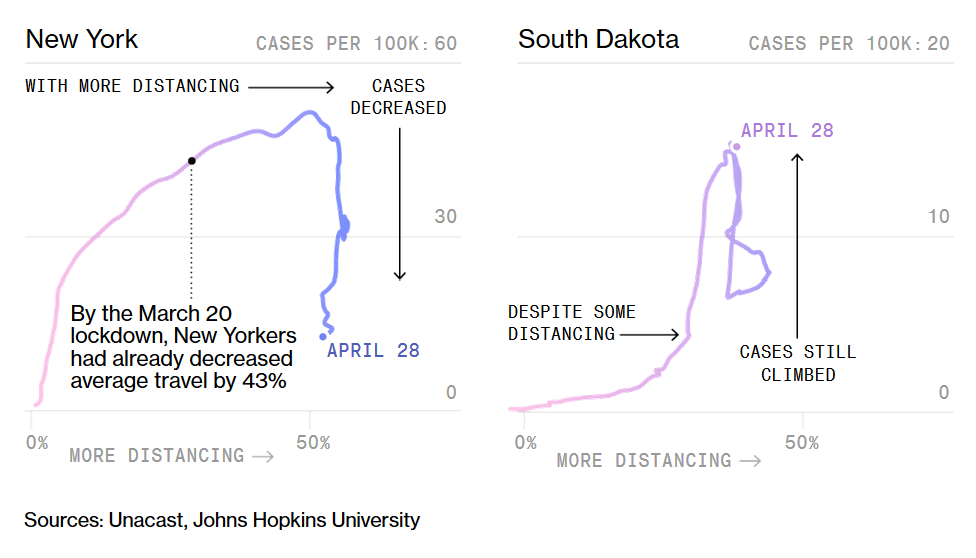 Here’s how each state’s efforts at social distancing have—or have not—slowed the rate of coronavirus infections per capita. 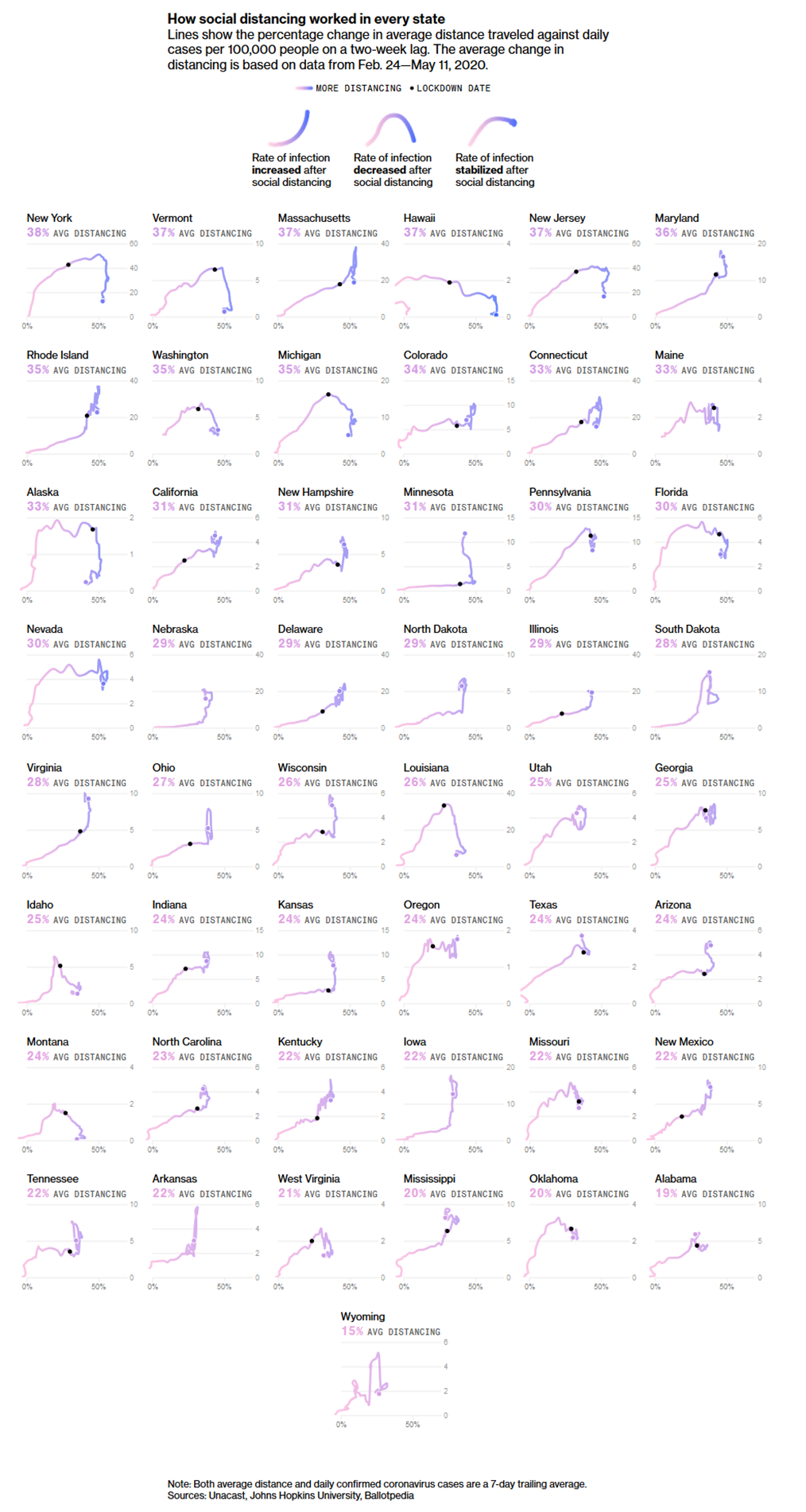 7) Even with the (very early) encouraging data coming out of Georgia and decline in cases nationally, L.A. County could keep stay-at-home orders in place well into summer, depending on conditions, which seems excessive. Excerpt:

As other California regions have seen a decline in the number of reported infections and COVID-19-related deaths, L.A. County, the state’s most populous, continues to see growth on both fronts. The county reported Tuesday an additional 961 people who tested positive for the virus, and an additional 45 deaths, bringing the death toll to 1,613. L.A. County’s COVID-19 deaths account for more than half of the state’s total.

Officials have noted that the numbers reported at the start of the week are typically lower, largely because testing is not at full capacity on weekends.

Nearly 253,000 individuals of L.A. County’s 10 million residents have been checked for the virus and roughly 11% — more than 32,000 — have been infected. Officials have been encouraging all residents, even those without symptoms, to get tested.

Officials have said that social distancing has helped slow the spread of the virus, but also have warned that it remains contagious.

As I’ve stated a number of times, it is best to allow policy to be dictated on a case-by-case basis rather than be uniform for an entire state or region.

8) Things we are reading: