My write-up below explains why I think our new cases will peak in 2-3 weeks and deaths will be less than 10,000 – a far more optimistic view than the general consensus right now.

But I could be wrong, so if you have constructive feedback, I’d welcome it.

As we think about the path the coronavirus might take, a good place to start is looking at China, where the virus originated in the city of Wuhan. The Chinese initially didn’t recognize the problem, and then the government tried to cover it up, so it spread like wildfire initially.

By the time the government realize its mistake and started locking down Wuhan and surrounding cities on January 23rd, 25 people had already died and new cases were growing exponentially, as this chart shows: 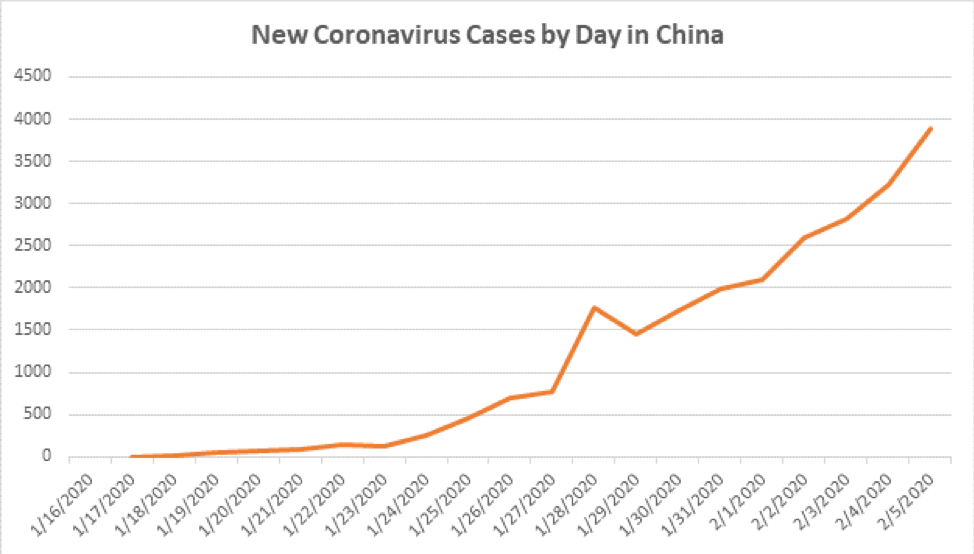 But only three weeks later, the strong measures China took began to kick in and the number of new cases began to fall – and only weeks later went to almost zero, as you can see in this chart (I’m excluding the spike during Feb. 13-15 when China changed its definition of who was infected): 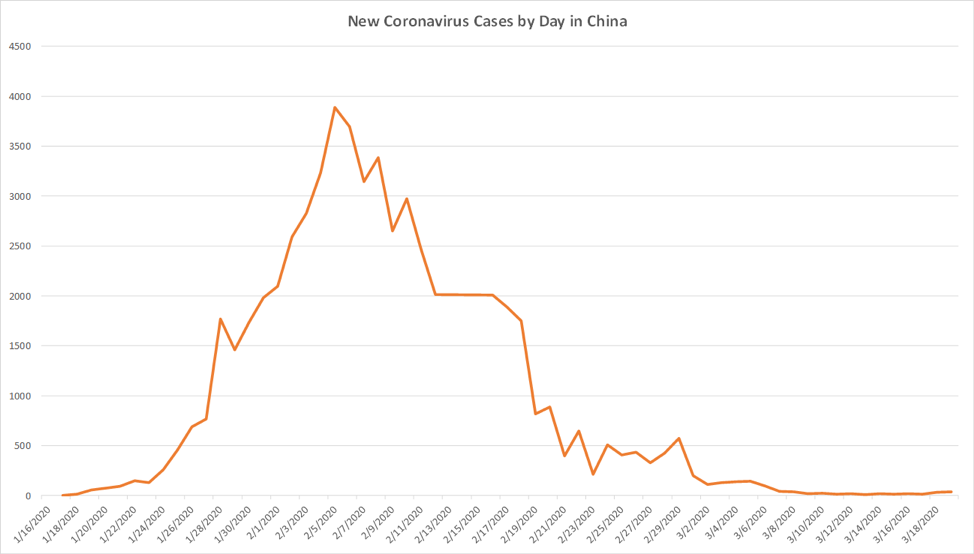 China’s Asian neighbors had even better experiences. Travelers from Wuhan carried the coronavirus to Taiwan, South Korea, Japan, Hong Kong, and Singapore, but each of these countries recognized the risk and took strong countermeasures, focused on testing to identify who’s infected and then taking targeted steps to quarantine and treat those people. All of these countries have effectively stopped the coronavirus in its tracks – and, importantly, did so without shutting down completely and quarantining all of their citizens.

Now, some people think that we’ll never be able to do what these Asian countries have done because neither our government nor our people are taking this seriously enough. They think we’re doomed to follow in the footsteps of Italy, which has seen many of its hospitals overwhelmed, had more deaths than any other country, and is now in a nationwide lockdown.

They point to this chart, which shows the number of new cases by day for the U.S. and Italy, with the U.S. 10 days behind: 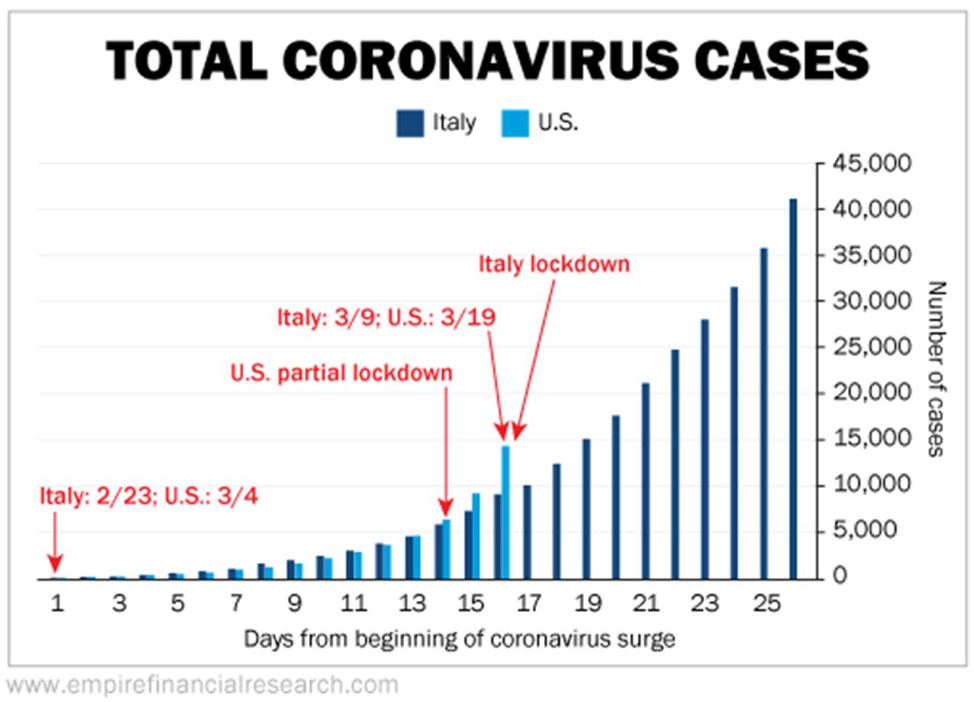 But the problem with this chart is that the U.S. is a much larger country – our population, at 331 million, is 5.5 times larger than Italy’s 60 million. If we adjust for cases per million people, the chart looks different – we’re still on a similar trajectory, but are 16 days behind: 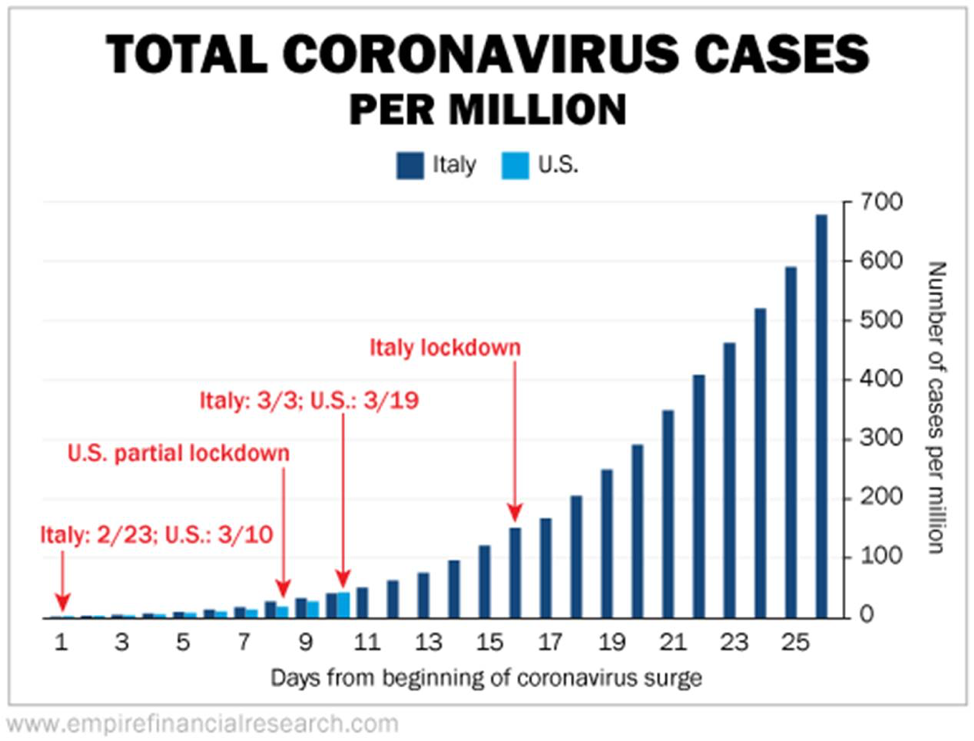 Those extra six days may not sound like much, but when the number of people infected by the virus, left unchecked, doubles every few days, it’s huge.

Here’s my back of the envelope math. Italy declared a national lockdown on March 9. Similarly, starting a week or two ago here, we started taking strong measures: closing schools, cancelling all large group events like professional and college sports, Broadway shows, and concerts; shuttering most businesses in cities with outbreaks; and initiating social distancing.

Unlike Italy, we haven’t had a national lockdown so it’s hard to choose a date for comparison, but I’m going to pick three days ago, Tuesday, March 17. That was day that, anecdotally, I felt that Americans really started to take this seriously, at least in part because President Trump finally reversed course the day earlier and issued guidelines that called for Americans to avoid social gatherings of more than 10 people and to limit discretionary travel.

So, we acted eight days after Italy – but our number of cases per capita is 16 days behind Italy, so that gives us an eight-day advantage.

If we assume the virus was doubling every four days, as Italy’s was at the time of its lockdown, that means we might have avoided two doubles. In other words, if the actions we’re taking prove to be effective, our peak infection rate could be only one-fourth Italy’s.

Now, it’s true that we haven’t done a complete, nationwide lockdown, but I want to point out a few things. First, Italy didn’t do a complete lockdown either. A lot of businesses remain open and many citizens have been violating the rules. Italy is infamous for this – for example, tax evasion there is among the highest in the world.

And there are other reasons to believe we’ll fare better than Italy, even without fully adopting their draconian measures. Their population density is nearly six times ours. 23% of Italians are over age 65 versus only 16% of Americans. 21% of Italians smoke vs. 14% of Americans. If you’ve ever been to Italy – I go every summer for at least a week – you’ll see how they all hug and kiss each other far more than Americans. In addition, families, across generations, are far more likely to live together. And lastly, though I know some will dispute this, I think our hospitals will do a better job of treating infected patients than Italy’s.

All six of these factors indicate that the coronavirus won’t spread nearly as quickly or broadly in the U.S., so I think there’s a good chance that our more targeted lockdown will work. And when people do get infected, our mortality rate will likely be much lower.

Now let’s take a look at our data on new cases each day. As you can see, this number is rising rapidly in the U.S.: 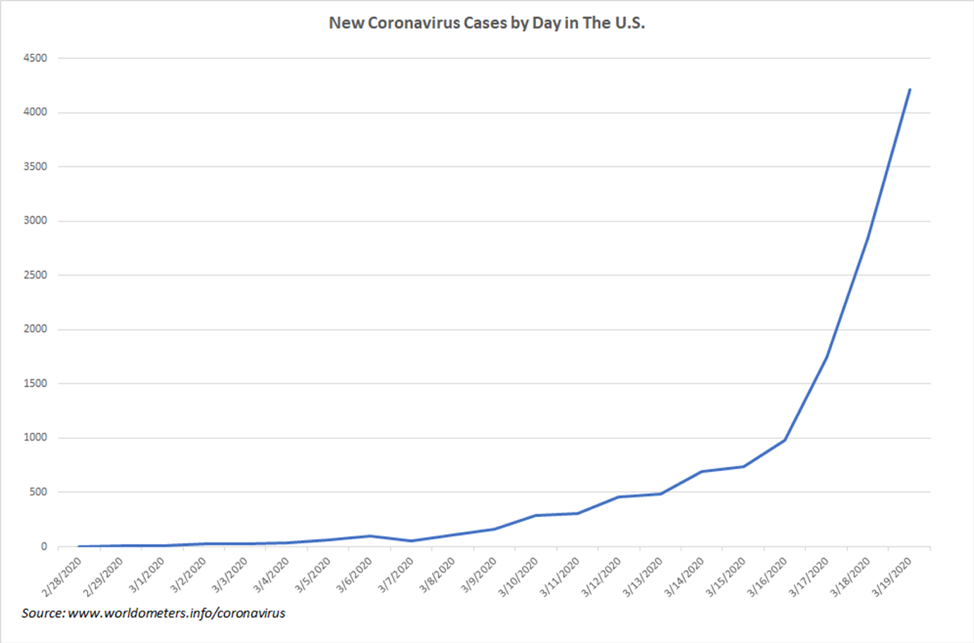 It’s also rising rapidly in the rest of the world (excluding China): 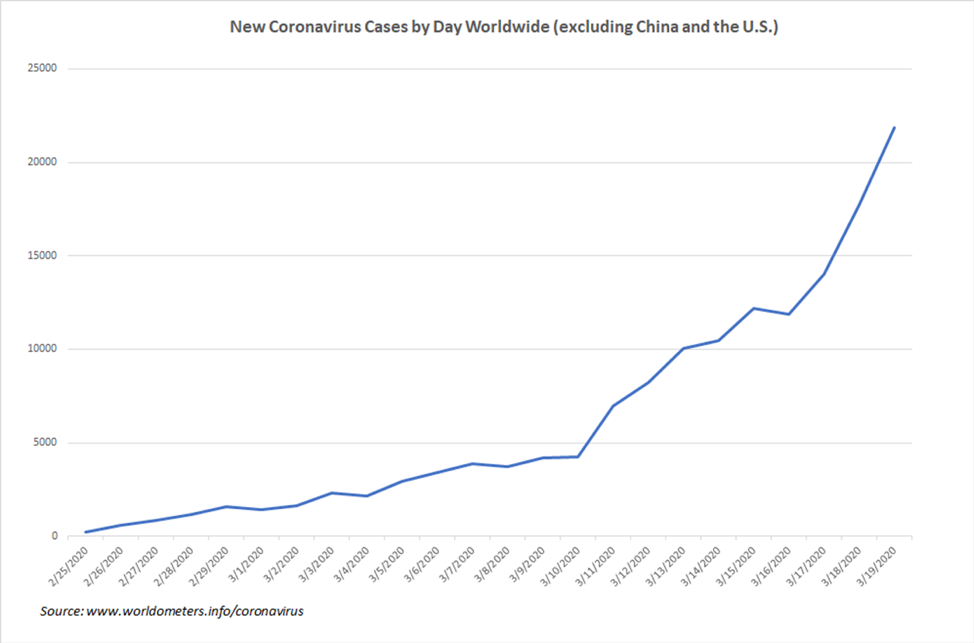 What folks are missing, however, is that these steep increases, initially, are good news, because it means that widespread testing is finally getting underway, which is critical to stopping the virus.

Until there is more widespread testing, we’re sort of flying blind.

But what we do know is that in South Korea, it took only 14 days for the number of new cases each day to peak. In China it took 22 days.

Now, we haven’t done a full lockdown, like they did in China. Nor have we yet ramped up widespread testing, like South Korea. So it will take us longer – maybe even as long as it took China and South Korea combined – that would be 36 days, or 18 days from now.

If the number of new cases each day peaks then – the end of the first week of April – then we’re likely looking at fewer than 10,000 deaths here . Every one them is heartbreaking, of course, but to put this in perspective, it would be a lower number than the annual flu, which kills 12,000-64,000 Americans every year.

I think expectations today are that new cases will keep rising for another six weeks at least, and that that coronavirus ends up killing hundreds of thousands of Americans.

If I’m right and this doomsday scenario doesn’t come to pass, we will be able to start returning to normal much sooner than most folks expect.