Chris Brown's monthly letter; Coronavirus poll; Training to climb The Nose; Pictures from this weekend; How I train

1) Chris Brown is one of the smartest investors I know.

He started his Toledo, Ohio-based fund, Aristides Capital, with $500,000 in 2008 and has put up incredible numbers. Today, Aristides has grown to $135 million.

Chris' strategy mostly focuses on buying a lot of small caps and special situations, but he also shorts obvious frauds. In 2018, he spoke at both of my shorting conferences, pitching Energous (WATT) on May 3, which has crashed 88% since then, and Tilray (TLRY) on December 3, which has fallen 92%. (You can watch the videos of these presentations here and here.)

He writes entertaining and insightful monthly letters. I particularly enjoyed his latest one, which he's given me permission to share (it's only three pages – click here to read it). Excerpts:

The disconnect between the strength of U.S. equity indices versus the economic condition of the typical working-class American has been somewhat stunning of late. In the last 15 years, we've spent trillions of dollars on asinine foreign conquest, recapitalized the banking system after the bursting of a debt-fueled housing bubble, diluted the currency to pay for it, systematically promoted extreme wealth disparities with monetary and fiscal policy, and then, just in the last five months alone, we've suffered a very expensive contagion and diluted the currency again, while protests and riots have broken out in the streets of nearly every major city because of persistent racial injustice.

The stock market, meanwhile, is doing basically fine because it is priced in nominal terms. Three trillion dollars of assets have been recently purchased by the Federal Reserve, and all of the resulting cash has flowed everywhere, like water over a poorly maintained rust belt dam.

The social fabric that holds us together has taken a beating. The last four decades have brought increasing financialization and leverage along with increasing profits to those with easy access to capital and stagnant real incomes for everyone else. Our shared cultural institutions are now less shared. Politicians have become more extreme. Regulatory capture is ubiquitous. Honesty, moderation, integrity, and financial prudence are in a severe downcycle, while alternative facts, extremism, influencers, and privatized profit with socialized risk are quite popular.

On the streets, there are chants of "Stop killing black people!" and "No justice, no peace!" Meanwhile, behind a computer, one of the millions of new day traders buys a stock because the chart is quickly moving higher. The cognitive dissonance is overwhelming at times. This is what happens when a government decides to pursue high asset prices as a policy priority. At the margins, for assets priced in nominal terms, it doesn't matter how bad the government is at promoting education, employment, health care, and security, if the government is buying enough assets to keep supply-demand dynamics in favor of higher prices...

As a long-short manager, this is one of the most interesting and most difficult market environments I have ever seen. The investors doing incredibly well are the ones who are buying story growth stocks with no consideration whatsoever about valuation. It's a trend that can intensify even further from here, but one day it will reverse without warning and never look back. Growth stocks without earnings are one step above a Ponzi scheme; in order for you to profit, someone else needs to be willing to buy shares and give the company capital at an even higher price...

In the intermediate-to-long run, we are glad for this period when value stocks are underappreciated, growth stocks achieve unsustainable valuations, and frauds prosper, because this sort of market should lend itself to a lot of good entry prices on positions that we think will likely do well in the future. If you can muddle through periods when the market is largely inhospitable to your investment style, it's likely that you'll prosper when headwinds abate...

The annoying part of this market for me isn't the speculative day trading bubble; I enjoy trading mispriced assets against amateurs. The annoying part is the policy-dependency; broad asset prices will be whatever Jerome Powell and Mitch McConnell make them, and I am not close buds with either.

2) A new ABC News/Ipsos poll shows that fewer Americans are concerned that they or someone they know will be infected with the coronavirus.

As such, more of us are willing to do a range of activities like going to work, out to eat, and even to a sporting event at a large stadium.

3) Greetings from Yosemite National Park, where I'm training to climb The Nose of El Capitan from Wednesday through Saturday this week (discussed in Friday's e-mail).

I arrived on Friday evening and, with my guide, climbed up the side of Half Dome on Saturday via a route called Snake Dike (I posted pictures and a description on Facebook here). Yesterday, we climbed to the top of El Capitan via a route along the shoulder called East Ledges (it's the trail we'll take down after finishing The Nose).

Today, we're climbing the first four pitches of The Nose to stash water and other supplies and lay fixed ropes, which will speed up the first day of our big climb starting on Wednesday (tomorrow is a packing and rest day).

Here are a few pictures from the weekend: 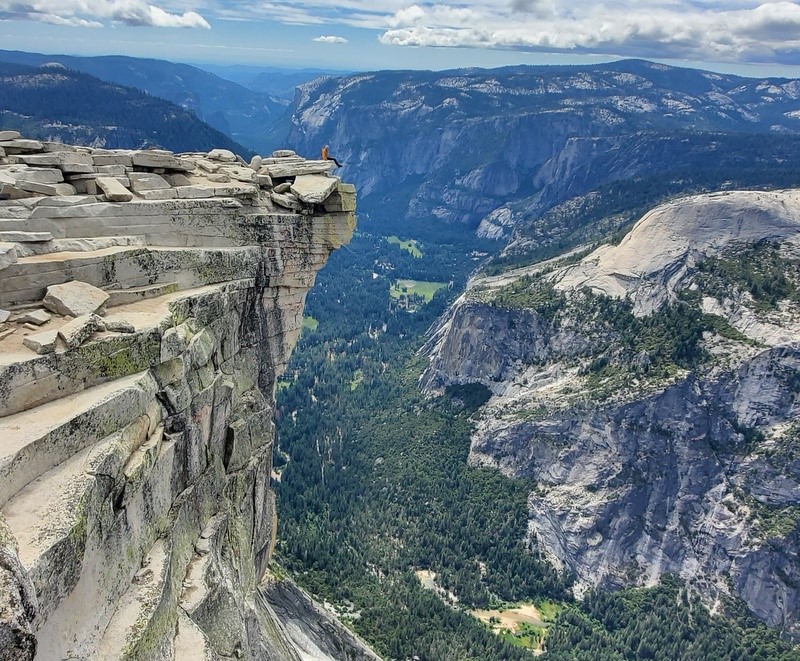 If you'd like to support my climb, here's the donation page.

A number of ways: I flew to Yosemite in February and trained with my friend/guide for five days... I belong to an indoor rock climbing gym just a few blocks from my home... And I try to stay in peak shape by exercising every day and, at least twice a week, doing super-intense workouts. In addition to saving time, these offer many other benefits, as outlined in the articles below:

These workouts – sometimes on my own, sometimes with a personal trainer, and sometimes at fitness gyms – maximize the physical (and, perhaps equally importantly, mental) stress on my body so that it doesn't break down when I'm doing much longer challenges. So far, they seem to be working!

To see how intense my hardest workouts are, I wore a heartrate monitor during one of my classes at Tone House, which is known for the toughest workouts in NYC. Below is a chart with the results, in which I've labeled what exercise we were doing.

My heartrate peaked at 197 and averaged 164 for 55 minutes. Pretty much every time it went over 180, I could barely stand!