Chris Brown on the difficulties of shorting in this environment; Will we follow Europe's path?; Find Your Place in the Vaccine Line

1) I've said it before and I'll say it again: Chris Brown is one of the smartest investors I know.

He started his Toledo, Ohio-based fund, Aristides Capital, with $500,000 in 2008 and has put up incredible numbers over the past 12 and a half years – earning his investors a return of 463.6% versus 59% for the HFRI Equity Hedge Index. Aristides now manages $128 million.

Chris' strategy mostly focuses on buying a lot of small caps and special situations, but he also shorts quite a bit. In 2018, he spoke at both of my shorting conferences, pitching Energous (WATT) on May 3, which has crashed 90% since then, and Tilray (TLRY) on December 3, which has fallen 91%. (You can watch the videos of these presentations here and here.)

Chris writes entertaining and insightful monthly letters. I particularly enjoyed his latest one, especially this part about the challenges of short-selling in this environment, which he's given me permission to share (the whole letter is only five pages – click here to read it):

I'm happy with our performance the last two months, though how exactly to position the fund in this macroeconomic backdrop is still challenging. The people who have chosen to put the pedal to the metal this year have been hugely rewarded, while those who have been cautious have looked dull. At month-end, we're slightly more net long than usual (40% on a beta-adjusted basis), and part of me wonders if we should crank that exposure up even further, as financial conditions remain extremely loose...

The catch is that most market participants with a pulse already realize how loose monetary conditions are right now, and are positioned betting that stocks will rise further. Sentiment indicators are stretched, and measures of speculative behavior, like the CBOE equity put-to-call ratio, suggest that we are in a period of wild gambling reminiscent of the dot-com bubble era.

Shorting any stocks in this environment has been insanely challenging and was especially so during November. An index (graph below) of the most shorted stocks in the Russell 3000 was up more than 28% (!!!) last month and has gained 180% from the March lows...

Why do we even bother to try to short stocks at this point? Because almost everyone has given up doing so. Short interest on the median S&P 500 stock has fallen by nearly half over the last decade, and by 20% over just the last year. It's not just S&P 500 names, though. Short interest in even some of the worst, most speculative, money losing companies has fallen precipitously because nobody wants to fight the wall of money rushing to buy everything. 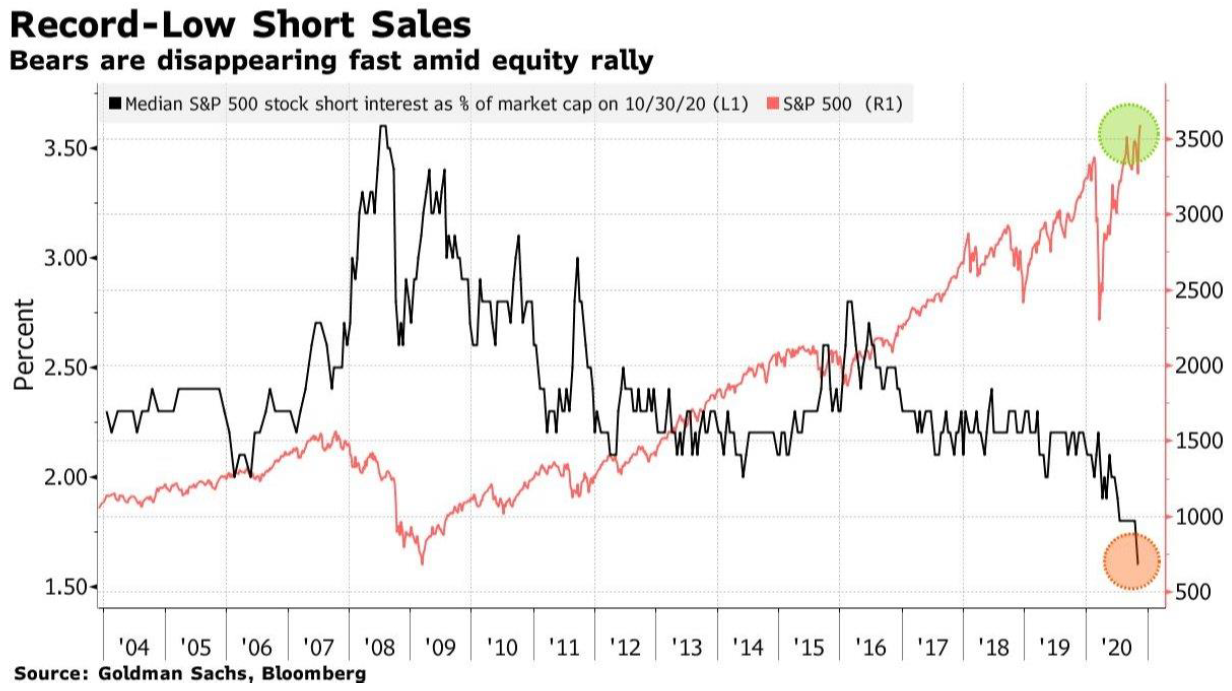 Remember that scene in The Big Short where someone asks who is buying all of the completely awful subprime mortgage-backed derivatives and the answer is "Dusseldorf"? A broker friend reports that while these European buyers are no longer chasing credit, now they are throwing their money at deeply unprofitable cleantech equity, including electric vehicle stocks, battery manufacturers, and fuel cell companies. It's not just Robinhooders and Redditors buying absolute crap; institutions are doing it too because it has been working so well.

Earlier today, I was researching a company losing eight figures a year in an intensely competitive, commoditized industry, with less than $10 million in revenue and a market cap of a quarter of a billion dollars. Two years ago, this sort of company would have been trading for pennies, and raising money via toxic warrant deals just to keep the lights on. Now, they are flush with cash and likely looking to raise more soon, after investors recently traded the entire company's float in one day, on a minor news announcement.

And guess what? I didn't short the stock. Leaving aside the short managers who have gone out of business this year, or the ones who have lost 40% of their capital to redemptions from investors who think they can do better elsewhere, even the folks like us who have been relatively unscathed are completely gun-shy at this point. We know that betting against small stocks with a transparently bogus story and near certainty of massive cash burn is a recipe for possible obliteration in today's market. I might short this stock someday, but probably not until/unless its market cap gets considerably nearer to $1 billion, and there's some sort of technical or fundamental catalyst...

Looking forward to the future, I am extremely inclined to believe that owning profitable companies at reasonable prices (and that may mean a 3% free cash flow yield to enterprise value for something like Google, but also it might mean a growing illiquid microcap stock with mid-teens return on invested capital and an earnings yield of more than 10%) and betting against promotional garbage that is completely dependent on more shares being sold to fund the huge cash burn from operations – I believe that strategy is very likely to do well. Especially when paired with all of the other things we do well at this firm.

2) In yesterday's e-mail, I expressed optimism that we will follow the path of Europe, which, after seeing COVID-19 cases peak a month ago, is seeing a sharp decline.

Not everyone shares my optimism, however... My old friend Joe Golton believes that December is going to be the peak of U.S. COVID-19 deaths, much higher than the Centers for Disease Control and Prevention's ("CDC") ensemble forecast. This is what he wrote to me:

The ensemble mid-point forecast is for 50,270 deaths during the four weeks ending December 26 (if you adjust that forecast to encompass all of December, it is approximately 56,500 projected deaths).

I have been running a simple spreadsheet model that has been reasonably accurate at short-term forecasting since March and it's telling me to expect closer to 95,000 deaths in December. This includes a 10,000 death fudge factor for extra deaths in the last couple weeks of December due to overwhelmed hospitals in rural areas. Even excluding this, my estimate of 85,000 deaths is much higher than what the CDC ensemble is forecasting.

Here's a really simple way to figure out projected deaths, which is the basis for how I do it: if you assume that the ratio between the number of actual cases to the number of reported cases has not changed in the past two months, then you can use reported cases to predict deaths four weeks later (e.g., in the first week of October, there were 46,500 new cases, and a month later, in the first week of November there were 6,430 deaths).

I don't think that the U.S. is going to follow Europe's recent case declines because nearly all Trump supporters – more than 40% of Americans – take few or no precautions. They get their news from Trump and Fox News, and consider COVID-19 to be little more than a bad case of the flu and therefore not worth worrying about.

On top of all this, the U.S. just had Thanksgiving, which I think will be a really big superspreader event, likely the biggest so far.

I have tracked U.S. versus Italy very closely since March. I know Italy's cases are in decline, and U.S. will follow eventually. But in my tracking of the data, the U.S. always comes out a little worse than Italy in the end. The key difference is that Italy doesn't have Trump or Fox News convincing people to eschew even minimal precautions.

In summary, I'm not at all happy about my December forecast, but it's what my spreadsheet model is telling me.

In mid-March, I was not able to imagine how badly the U.S. would react to the pandemic. Now I expect it, and I'm very sad about it.

I have no doubt that the Biden administration will do things far better and that vaccines will make a big impact, but by the time these factors begin to have an impact, we'll already be past the worst of it – but with tens (maybe even hundreds) of thousands of unnecessary deaths.

Joe and I are both hoping that he's wrong!

3) I filled out this short New York Times survey, Find Your Place in the Vaccine Line, and discovered that I'm close to the back of the pack – the 91st percentile in NYC, to be precise – in terms of when I might get vaccinated.

That's OK with me. As you've probably gathered by my activity level (volunteering at the Samaritan's Purse field hospital, two rock climbing trips to Yosemite and Las Vegas, going to Kenya later this month to visit my family, etc.), I'm not super stressed about COVID-19.

I certainly would prefer not to get it and am taking reasonable precautions, but:

So I'm happy to let others get the vaccine first...