1) Tech giants like Apple (AAPL), Alphabet (GOOGL), Amazon (AMZN), and Facebook (FB) are facing so many investigations, fines, and lawsuits by so many different government entities that I can barely keep track of them.

Here's a Wall Street Journal summary of just the ones in the U.S. by the Justice Department, the Federal Trade Commission, state attorneys general, Congress, and the Federal Communications Commission: These Are the U.S. Antitrust Cases Facing Google, Facebook and Others.

Here are some other recent articles with further details:

When Big Tech's CEOs are hauled before Congress and accused of amassing excessive power, the leaders from Apple, Facebook, Google, and others have often tried to present a united front. But these companies are also competitors, and have recently taken to calling on regulators to go after each other.

Facebook and Apple are now feuding openly, after years of low-level tension. Facebook has launched a website and ad campaign that accuse Apple of threatening "the free Internet" through new policies on personal data tracking. Apple says it's just "standing up for our users."

Facebook says Apple will hurt small businesses. "Apple's latest update threatens the personalized ads that millions of small businesses rely on to find and reach customers," Facebook noted on a website it created to give "small business owners a place to speak their mind." Facebook's business model relies on its ability to deliver targeted ads around the Internet.

So, should investors be avoiding these stocks? I think not. The reason they're coming under such scrutiny is because they're such dominant businesses – the type I like to invest in!

2) For example, this NYT article about Google's dominance in search makes me even more bullish on GOOGL shares: Google Dominates Thanks to an Unrivaled View of the Web.

I hadn't realized that many web sites block the "crawlers" from other search engines, thereby ensuring that Google's "index" of web pages is far more comprehensive than its competitors'. Excerpt:

Websites and search engines are symbiotic. Websites rely on search engines for traffic, while search engines need access to crawl the sites to provide relevant results for users. But each crawler puts a strain on a website's resources in server and bandwidth costs, and some aggressive crawlers resemble security risks that can take down a site.

Since having their pages crawled costs money, websites have an incentive to let it be done only by search engines that direct enough traffic to them. In the current world of search, that leaves Google and – in some cases – Microsoft's (MSFT) Bing.

Google and Microsoft are the only search engines that spend hundreds of millions of dollars annually to maintain a real-time map of the English-language internet. That's in addition to the billions they've spent over the years to build out their indexes, according to a report this summer from Britain's Competition and Markets Authority.

Google holds a significant leg up on Microsoft in more than market share. British competition authorities said Google's index included about 500 billion to 600 billion web pages, compared with 100 billion to 200 billion for Microsoft.

3) Speaking of Google, it just released its "Year in Search 2020" top search terms, which you can review here (use the pull-down menu to select a country or see global results). The associated three-minute video is here. Someone converted the data into this cool chart: 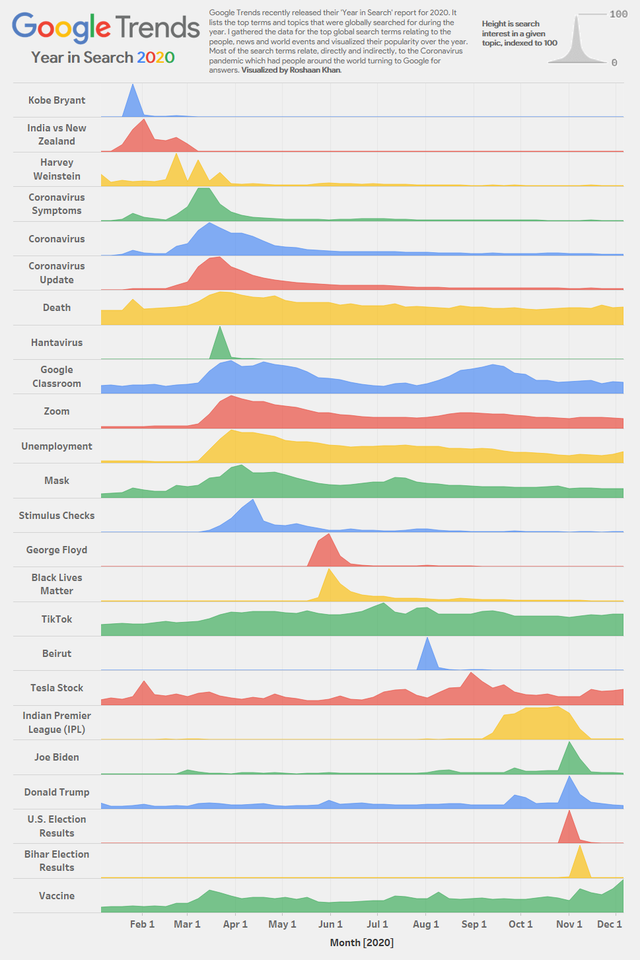 In a final draft of a more than 20-page administrative complaint reviewed by the Wall Street Journal, the enforcement arm of the Massachusetts Securities Division said Robinhood failed to protect its customers and their assets, violating state laws and regulations. Robinhood exposed Massachusetts investors to "unnecessary trading risks" by "falling far short of the fiduciary standard" adopted this year that requires broker-dealers to act in their clients' best interest, the state said...

The accusations from Massachusetts center on the tactics that the company uses to keep customers engaged, claiming that it "encourages customers to use the platform constantly" through what it calls "gamification." The complaint alleges that, through the promise of free stocks, push notifications and its signature digital confetti, Robinhood encourages "continuous and repeated engagement with its application." State regulators allege Robinhood allowed one customer with no investment experience to make more than 12,700 trades in just over six months...

It also alleges Robinhood violated its own rules regarding options trading by approving customers to engage in the practice without having the necessary qualifications.

This August 20 article in the WSJ highlights similar issues: Does Robinhood Make It Too Easy to Trade? From Free Stocks to Confetti.

Robinhood Financial has agreed to pay $65 million to settle regulatory claims that it didn't sufficiently disclose its business deals with high-speed trading firms, the Securities and Exchange Commission said Thursday.

The deal resolves an SEC investigation that looked at Robinhood's failure until 2018 to reveal on its website how it makes money from its deals with speedy trading firms such as Citadel Securities and Virtu Financial. Robinhood and other retail brokerage firms generate revenue by routing customers' orders to high-speed traders, which pay for the right to execute many of the trades.

On December 4, WSJ columnist Jason Zweig wrote about his experience using the app (I Started Trading Hot Stocks on Robinhood. Then I Couldn't Stop)... so I decided to give it a try as well.

I set up an account earlier this week, funded it with a $1,000 transfer from my checking account, received one share of free stock – biotech firm Akebia Therapeutics (AKBA), worth $3.04 – as a bonus for signing up, and less than a day later was able to trade.

To test it out, yesterday I bought $10 worth of Bank of America (BAC), equal to 0.350324 of a share. Sure enough, I was rewarded with the "signature digital confetti": 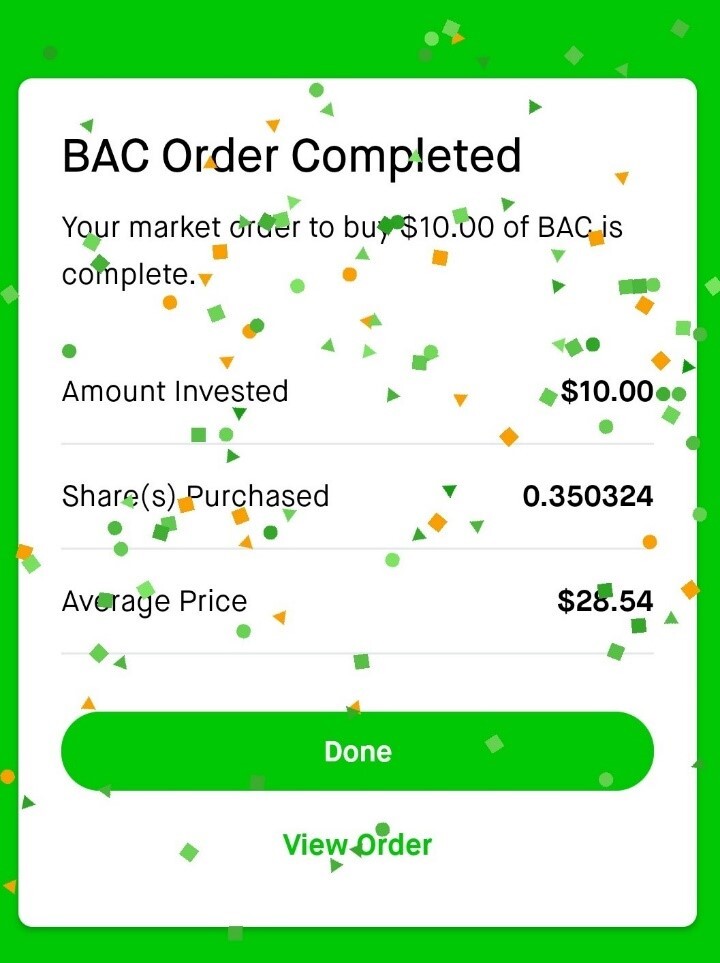 Soon thereafter, the app asked me if I wanted to trade options. When I said yes, it asked me a few questions about my experience with them (extensive, I answered truthfully), and within five minutes I was approved.

In summary, after only a day of using it, there's no doubt in my mind that, as the Massachusetts regulators charge, Robinhood "encourages customers to use the platform constantly" through what it calls "gamification." As a result, I can easily see how novice investors could quickly become addicted and lose a lot of money.

There are scary parallels with slot machines, which are also designed to be addictive – for more, see this article in The Atlantic: How Casinos Enable Gambling Addicts. Excerpt:

Modern slot machines develop an unbreakable hold on many players – some of whom wind up losing their jobs, their families, and even, as in the case of Scott Stevens, their lives.

5) Kudos to MacKenzie Scott, the ex-wife of Amazon CEO Jeff Bezos: MacKenzie Scott Gives Away $4.2 Billion in Four Months. It's good to see that some of the enormous wealth being created by the stock's parabolic rise is going to good causes. Excerpt:

MacKenzie Scott is giving away her fortune at an unprecedented pace, donating more than $4 billion in four months after announcing $1.7 billion in gifts in July.

The world's 18th-richest person outlined the latest contributions in a blog post Tuesday, saying she asked her team to figure out how to give away her fortune faster. Scott's wealth has climbed $23.6 billion this year to $60.7 billion, according to the Bloomberg Billionaires Index, as Amazon.com Inc., the primary source of her fortune, has surged.

"This pandemic has been a wrecking ball in the lives of Americans already struggling," she wrote in the post on Medium. "Economic losses and health outcomes alike have been worse for women, for people of color and for people living in poverty. Meanwhile, it has substantially increased the wealth of billionaires."

Scott's gifts this year approach $6 billion, which "has to be one of the biggest annual distributions by a living individual" to working charities, according to Melissa Berman, chief executive officer of Rockefeller Philanthropy Advisors.