Buffett and Munger in fine form; The biggest risk to Berkshire; Why I keep going to the annual meetings; Pictures from the weekend; My one disappointment; Berkshire's first-quarter earnings

1) I got back late Sunday from a great weekend in Omaha, Nebraska. It was my 22nd consecutive Berkshire Hathaway annual meeting.

Warren Buffett and Charlie Munger were in fine form, displaying their razor-sharp minds as they answered dozens of questions from the panel of analysts and journalists as well as the audience. It’s remarkable to see these wise old men, at 88 and 95, getting better with age!

This won’t always be the case, of course, and it’s something I monitor closely. I’ve long said that the greatest risk to Berkshire isn’t that Buffett gets hit by the proverbial bus. Not to be morbid, but most people don’t die suddenly – rather, they slowly fade away, both physically and mentally. Berkshire’s value could be seriously impaired if Buffett starts to lose it mentally and makes one or more large, ill-advised investments.

It’s certainly possible that Buffett might not recognize his own mental decline (or refuse to acknowledge it because he loves his work so much) and the board fails to act, perhaps rationalizing that a diminished Buffett is still better than anyone else.

Buffett is aware of this risk and has instructed Berkshire’s board members, both publicly and privately, that their most important job is to “take away the keys” if they see him losing it.

I trust that both Buffett and the board will act rationally, but also view it as my job to independently observe and evaluate him to make sure I’m comfortable that he’s still at the top of his game.

The good news is, based on what I saw this weekend, he’s never been better.

2) I’m often asked why I keep coming to the annual meetings, especially since I freely acknowledge that nothing really changes: It’s pretty much the same people asking the same questions and getting the same answers!

In part, it’s because I have a lot of fun catching up with old friends and making new ones. Plus, even after more than two decades studying Buffett and Munger intensively, I find that I still keep learning from them.

In the early days of my career, I was so inexperienced – and they were such brilliant, inspiring, and patient teachers! Had I not absorbed all of the investing lessons they imparted, I never would have achieved anything close to the success I did.

I’ve come to realize, though, that the most important things I’ve learned (and continue to learn) from these wise men go beyond investing into what Munger calls “worldly wisdom,” which is the key to succeeding in the larger game of life.

At its core, this wisdom is rooted in some simple concepts: become a lifelong learner, develop good habits, be nice to everyone, marry the right person and keep that relationship strong, avoid calamities, etc. But, like investing, while these concepts are simple in concept, they can be difficult in practice. So it’s always good to hear Buffett and Munger’s wisdom every year.

3) Here are some of my pictures from the weekend: 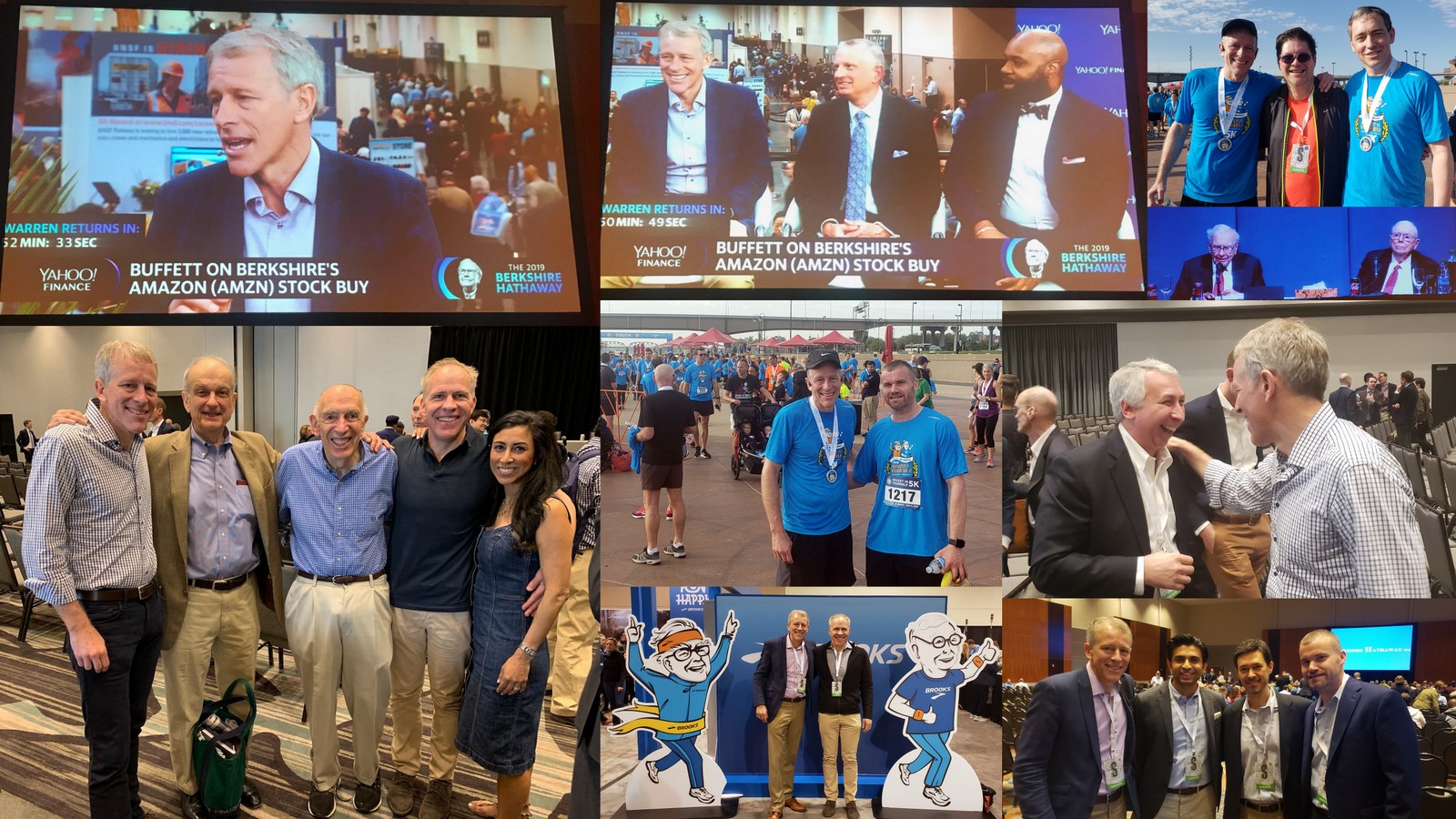 In them are screenshots of my interview with Yahoo Finance at the lunch break of the meeting… me hanging out with various friends and family, including my uncle, cousin, and his wife… Chris Stavrou, who was attending his 34th consecutive meeting (he first bought Berkshire in the 1970s at $211 and his average cost on the shares he owns today is $1,780)… Guy Spier… Lloyd Khaner… and my analysts Steve Culbertson and Kevin DeCamp.

4) My one disappointment from the weekend was that I didn’t get to ask a question. I’ve asked a dozen over the past two decades – more than anyone – and being a competitive guy, I was looking forward to adding to my lead!

There’s a lottery at each microphone, so you have to get lucky and be one of the first two names picked. Twelve of us were waiting at microphone 11 in the overflow room, so my odds weren’t good. But to my delight, I was No. 2, so I prepared this question, to which I was eager to hear Buffett and Munger’s thoughts:

My question is about self-driving cars.

Last week Tesla announced that, within a year, its cars will have full Level 5 self-driving capabilities – meaning a steering wheel would be superfluous.

It also announced that, pending regulatory approval, it will have a fleet of a million robotaxis by the end of next year.

This timeline is years more aggressive than that of any other carmaker.

Do you have an opinion on how quickly any automaker will be able to offer truly autonomous driving, meaning you’ll be able to get in your car in Omaha and drive to LA or New York without touching the wheel even once?

And regardless of the timeline, what are your thoughts on how this will affect two major Berkshire holdings:

First, could self-driving trucks reduce the huge cost advantage railroads have over trucks?

And second, if autonomous cars get in far fewer accidents, could this hurt GEICO’s business?

For whatever reason, however, Buffett and Munger were moving more slowly through the questions this year. They took the question from microphone 10 at 3:25 p.m., so it looked like I was going to be the last question before the meeting ended at 3:30. But then they gave a super-long answer and ended the meeting. ARRRRHHHHHH!!!

5) Over the weekend, Berkshire released its first-quarter earnings (here are links to the press release and 10-Q). Overall, the company continues to hum along. A few quick thoughts:

There’s been a lot of talk about Berkshire stock underperforming, but this is nonsense. This chart shows Berkshire versus the S&P 500 Index over the past decade since the market bottomed on March 9, 2009… 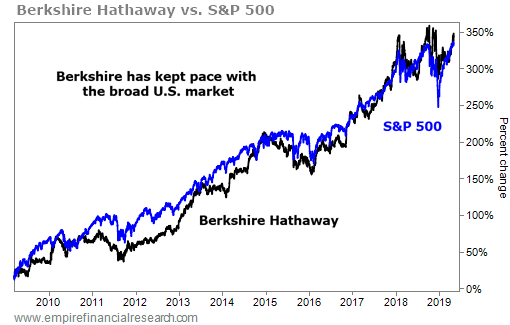 As you can see, Berkshire has kept up almost exactly with the market, which is incredible performance in my opinion, given that: a) Berkshire is ultra-conservative, with a huge cash hoard… and b) the market has been driven by a handful of big tech stocks.

To be clear, this is a “stay rich” stock, not a “get rich” stock. I think it will continue to keep up in a rising market and outperform meaningfully in a bear market.