Breaking news on the GSEs; Three best pot stocks; Why the dismal performance of super-unicorns will sink the We Company's IPO; More on We

1) Treasury Secretary Steve Mnuchin is moving faster than I could have imagined to recapitalize and release from conservatorship mortgage giants Fannie Mae (FNMA) and Freddie Mac (FMCC).

Just this morning on CNBC, when asked about negotiations to end the "net worth sweep," he said (emphasis added):

That's something that the FHFA (Federal Housing Finance Agency) and we are working on. We are actively negotiating an amendment, and I think our objective is to try to get it done by the end of the month.

2) One of my readers recently asked me which pot stock I recommend...

I knew enough to warn my readers (here and here) about the silly, overpriced dreck like Tilray (TLRY) at the top of the bubble a year ago. (Sure enough, it's down 90% since then, exactly as I predicted.) But I'm not an expert on the sector... so I turned to my friend at Stansberry Research, Tom Carroll, who writes the Cannabis Capitalist newsletter.

Tom spent 17 years as an analyst and managing director at Legg Mason and Stifel Financial. His background as both an award-winning stock picker and his profound knowledge of the health care market make him well-qualified to analyze the cannabis industry and find undiscovered gems.

Here's what he sent me:

My three favorite stocks in the sector right now are:

Though these three companies trade on Canadian exchanges, they don't actually do any business in Canada. In fact, Tom isn't a fan of the companies that operate in Canada in general. Here's why...

I'm still not a fan of the Canadian or international-focused cannabis companies, though I'm intrigued by Canopy Growth (NYSE: CGC). It remains CEO-less after the board ousted former CEO (and stock promoter) Bruce Linton.

It's a collection of assets that doesn't seem to have a good strategic direction. That said, the stock has pulled back a lot – it's been nearly cut in half in the last four and a half months.

It gets a lot of attention because spirit-maker Constellation Brands (STZ) has invested $4 billion in it, and because it trades on the New York Stock Exchange. As cannabis stocks gain traction again, it will likely see some momentum.

Thank you, Tom! If you're interested in learning more about and subscribing to his Cannabis Capitalist newsletter, click here.

3) My colleague Enrique Abeyta and I published an article on Yahoo Finance yesterday, sharing our bearish view of the We Company and other unicorns. (The article should sound familiar to regular Empire Financial Daily readers, as we discussed the topic in last Thursday's e-mail.) Read it here: Why the dismal performance of super-unicorns will sink the We Company's IPO. Excerpt:

All but one of them – Pinterest – are down from their closing price on the first day of trading... And four of them are down more than 35%!

This dismal performance certainly reinforces our view that there was a bubble among unicorn stocks, especially the biggest ones, that is now bursting in a slow and painful way. We would avoid every one of these stocks like a plague – in fact, they are all good shorts, especially Uber and Lyft, whose hope of ever achieving profitability is now in doubt as California is about to pass a law making their drivers employees rather than contractors. This is likely the start of a trend that they will be unable to stop – one that will have adverse effects on many other richly valued companies that rely on exploiting low-paid, no-benefits "gig economy" workers. Investors beware!

As for the We Company, its largest investor, Softbank, is urging it to indefinitely delay its IPO so it doesn't have to take a big write-down that would jeopardize its ability to raise its massive Vision 2 fund. But the company insists that it's going ahead with its IPO, and is desperately stashing its valuation to get it done. It has no choice: It needs to raise $3 billion in stock to unlock $6 billion in debt – money it needs to fund its overly ambitious growth plan and cover its hideous losses, which show no sign of diminishing.

It's not going to work. You can stick a fork in this IPO.

When that happens, the We Company is in big trouble. In fact, we think the company goes bankrupt within a year. That's what happens when companies run out of cash – and who, exactly, is going to provide this money-losing pig with the billions of dollars necessary to keep its fatally flawed business model alive?

4) More on the slowly unfolding, endlessly fascinating train wreck that is We (gosh I had fun writing that!): 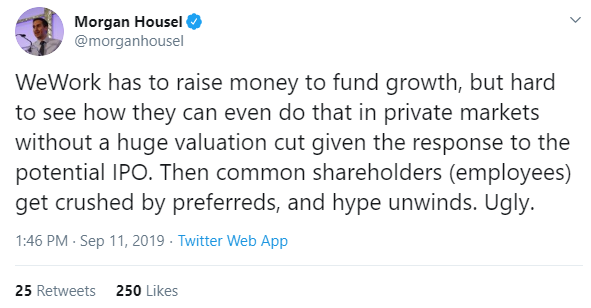 All WeWork is doing is a big carry trade on long-term versus short-term lease liabilities. The last few years have been a perfect environment for this kind of trade – yet WeWork still can't make any money! And it's easy to replicate... The reason others don't do it is that this mismatch is very risky and will lead to a blow up in a recession: WeWork's Latest Threat: Old-School Landlords Trying to Copy WeWork. Excerpt:

This June, the big landlord punched back. It launched its own co-working business, called Hines Squared, as a direct competitor to WeWork.

Other major office-building owners are doing the same, from Boston Properties to British Land PLC to Tishman Speyer, whose co-working brand, Studio, has six locations open and six more under construction.

The moves raise two big uncertainties in the real-estate world, critical to investors and tenants alike: Whether large office-building owners can forestall an Uber-like undermining of their business—and whether the flexible-space, co-working startups can outflank a well-funded counterattack.

Over the past six days, WeWork executives have raced from city to city in an attempt to win over increasingly skeptical investors.

But by the time the company's Gulfstream G-6 touched down outside New York late Tuesday night, the grandiose ambitions of Adam Neumann, the company's brash co-founder and pitchman, remained poised on a knife's edge. His own fortune, while still enviable, was rapidly slipping away.

With WeWork's valuation plummeting, anxiety is growing about when, how or even whether the hipster office-rental company should go public, with even its own bankers unnerved. In question, too, is where this now leaves other fast-growing, money-burning companies – the so-called unicorns. 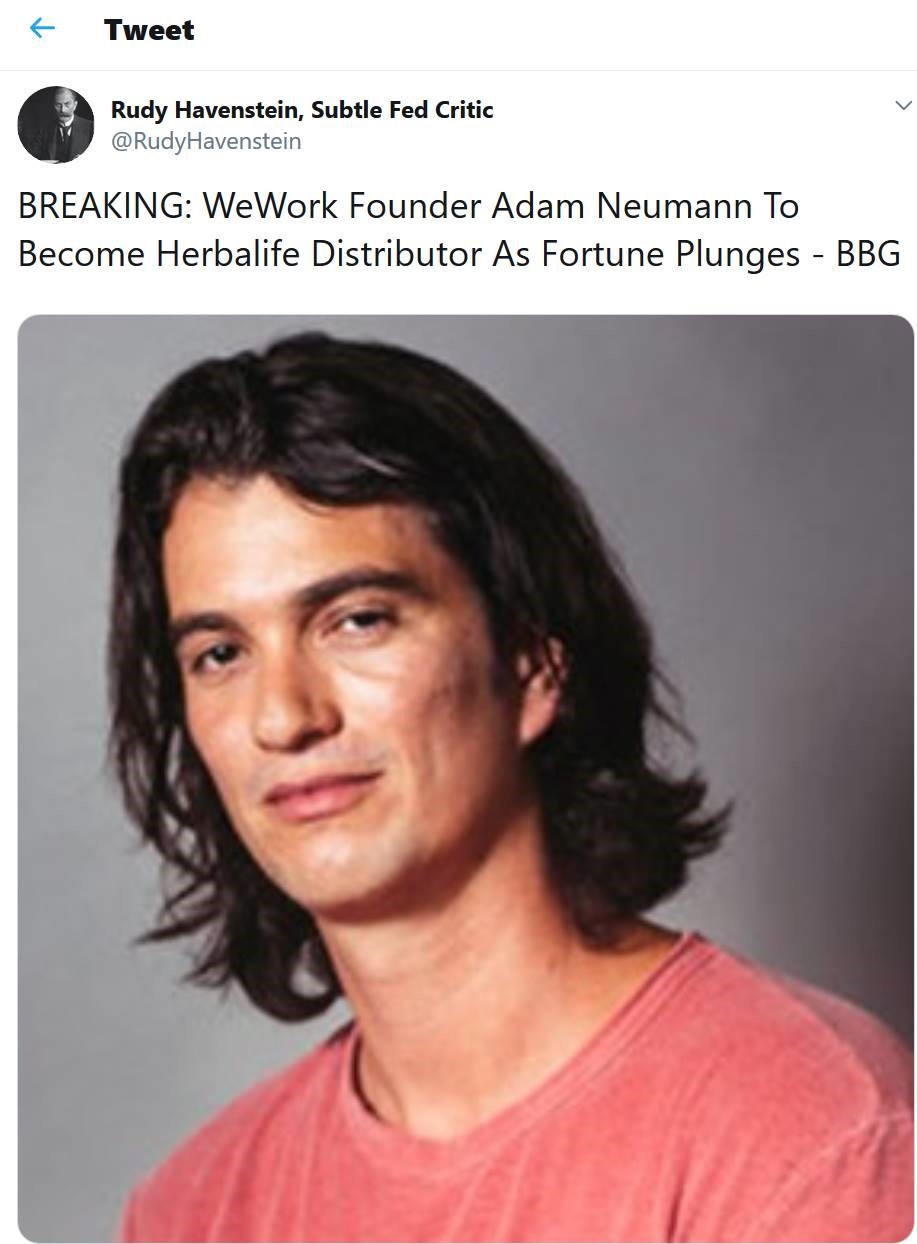