1) With the train wreck – oops, I mean first debate – behind us, all eyes are now on the election, which is only four weeks from Tuesday…

As best I can tell, there’s a widespread view in the business and investing community that a Biden win (62% likely according to PredictIt and 79% likely according to FiveThirtyEight) – especially if it’s accompanied by Democrats holding the House and, critically, retaking the Senate (57% on PredictIt, 62% on FiveThirtyEight) – would be bad for the economy and stocks, as Democrats would likely raise taxes and increase regulations on businesses, among other things.

It’s possible that this conventional wisdom will prove correct – but I’m betting that stocks will do well regardless of who wins the presidency, even if there’s a Democrat sweep.

Here are two arguments why…

The first is a 21-page report last week by Moody’s Analytics: The Macroeconomic Consequences: Trump vs. Biden. Here’s a summary from the Washington Post: Biden would create stronger economic growth and more jobs, economists find. Excerpt:

A Democratic sweep that puts Joe Biden in the White House and the party back in the Senate majority would produce 7.4 million more jobs and a faster economic recovery than if President Trump retains power.

And they are not alone in finding a Biden win translating into brisker growth: Economists at Goldman Sachs and Oxford Economics conclude that even a version of Biden’s program that would have to shrink to pass the Senate would mean a faster rally back to prepandemic conditions.

All three see the higher government spending a Biden administration would approve – for emergency relief programs, infrastructure, and an expanded social safety net – giving the economy a potent injection of stimulus.

The economic outlook is strongest if Democrats sweep Washington, the Moody’s team finds.

“In this scenario, the economy is expected to create 18.6 million jobs during Biden’s term as president, and the economy returns to full employment, with unemployment of just over 4%, by the second half of 2022,” they write.

Real after-tax income for the average American household would increase by $4,800 by the end of Biden’s first term, the economists project, and house prices and homeownership rates both would nudge upward.

On top of the extra federal spending, an all-Democratic government would translate into stronger growth by reengaging in freer trade and loosening immigration restrictions. And while a Biden administration would seek to offset some of his proposed $7.3 trillion in new spending over the next decade with $4.1 trillion in higher taxes on corporations and the wealthy, “the net of these crosscurrents is to boost economic activity,” the economists write.

2) The second argument against the conventional wisdom comes from my friend Doug Kass of Seabreeze Partners. He writes:

Will We See a ‘Biden Bump’ Which May Levitate Stocks Throughout the Balance of the Year?

* It now appears increasingly likely, based on the betting parlors and polls, that former Vice President Biden will be elected President

* A possible Democratic sweep could actually (and unexpectedly) benefit stocks as, with a non-litigated election, would come large fiscal relief in February 2021

I will hold back on any comments about last night’s Presidential debate as I would get too emotional and too political – this would serve no purpose in my Diary at this time.

In 2016, the contrary – a Trump Presidential win and a roaring advance in the U.S. stock market – confounded the “talking heads” (including me!).

In 2020, the contrary – a Biden Presidential win (and possible Congressional sweep) could deliver an anticipatory market advance – may also confound many.

The fact is that the odds in betting parlors and in polls (in which the incumbent’s past successes in Wisconsin, Michigan and Pennsylvania now appear likely reversed) are clearly indicating the growing likelihood of a Democratic Presidential win in November.

Here are Predictit’s latest betting odds, which show the widest lead of Biden over Trump. (The polls show a similar expanding wide between the two candidates.)

* From my perch, a more convincing Biden win (and possible Congressional sweep) is now my baseline expectation. This, to me, is market-friendly and let me explain.

* The worst outcome for the markets would have been a close and litigated election in which the outcome would be uncertain for days, weeks, or even months. In this case there could be civil unrest and the markets would not only suffer but the market would likely also grow more volatile. Much-needed fiscal relief would be placed on the back burner.

* A middle-of-the-road outcome for equities would have been a Biden win and the Republicans regaining control of the Senate. A large fiscal package would likely be somewhat diluted in this scenario.

Before one objects to my interpretation, let me explain…

The government (and by that I mean both the Congress and the White House) has failed our small businesses, which have been gutted by Covid-19. As Jim Cramer tweeted, “they failed us.” The big ones won (Amazon (AMZN), Target (TGT), Costco (COST), Walmart (WMT), etc.) and it is growing almost too late for fiscal stimulus that could provide the necessary help to Main Street.

So, most importantly, a Biden win and Democratic sweep of the Congress would hasten the imperative and passage of a massive fiscal stimulus program (that is now being “discussed” between the two parties) – probably as soon as February 2021.

I recognize my view is a contrary one. Most think, as my friend Peter Boockvar wrote to me (in an e-mail exchange between us this morning):

That people will shoot first and ask questions later on tax policy. Everyone will want to pay the 2020 cap gains tax rate and worry about hike in corporate taxes. If 2021 doesn’t bring that, stocks will rebound but we know the money management industry is very sensitive and emotional to anything happening in November and December.

Peter might be correct in a normal year but perhaps not in a year in which unemployment is so elevated and in which a large number of small businesses have been gutted and are in desperate need of a financial lifeline.

Moreover, if you look closely and analyze Biden’s tax plan – it appears quite thoughtful.

But there are other factors that argue in favor of a “Biden Bump” and continued market advance. Specifically:

While I have expressed and continue to be concerned with intermediate-term issues that could serve as market headwinds in 2021 (a disappointing economic and profit outlook relative to consensus, the rapid accumulation of private and public debt, the specter of rising inflation, the lack of global cooperation and coordination – and its impact on world trade, elevated valuations, the likely diminished impact of monetary policy – the Fed is “pushing on a string,” the need for higher corporate tax rates to help fund the exponential growth in national debt, etc. – much needed (large) fiscal stimulus pushed by Democratic Party initiatives, likely vaccine and therapeutic advancements, and seasonal strength in equities (within the context of unprecedented easy money) are the ingredients of a possible “Biden Bump” in the months ahead.

And, a changed market structure (dominated by passive products and strategies that worship at the altar of price momentum) – in which “buyers live higher (and sellers live lower)” may be the cherry on top of a fourth quarter market advance.

In summary, I would not view what appears to be an increasingly likely Democratic victory as a reason to sell stocks. Indeed, consider this contrary… that a possible Biden Bump (higher) in equities lies ahead.

Thanks for sharing your insights, Doug!

3) In my e-mails over the past couple of weeks, I’ve been highlighting some of the smartest activist short-sellers.

I would be remiss if I didn’t mention one of the best, Sahm Adrangi of Kerrisdale Capital, who yesterday released a 34-page report on AtriCure (ATRC). The stock was down 15% on the open, but finished the day flat. Here’s a summary:

We are short shares of AtriCure, a $1.9bn medical device company that manufactures and sells ablation equipment used in the surgical treatment of atrial fibrillation (AF). At about 7x forward revenues, AtriCure’s valuation implies that the company’s outlook is brighter than at any point in the last decade. But with the company’s core surgical ablation market almost completely saturated, and the relentless improvements in catheter ablation technology accelerating, AtriCure is facing both rapidly decelerating revenue growth and the threat of technological obsolescence, simultaneously.

At the root of AtriCure’s impending difficulties is the company’s reliance on surgical cardiac ablation procedures, which underlie roughly 80% of the company’s revenue. The overwhelming majority (over 90%) of these procedures are performed concomitantly with open-heart surgery that patients undergo irrespective of their AF – the chest is already open, so the surgeon takes some extra time to ablate the cardiac structures from which the AF originates.

The problem for AtriCure is that, despite demographic tailwinds, the absolute number of open-heart surgeries has stagnated over the past decade as less invasive procedures, and earlier medical intervention, have successfully reduced the need for risky surgery. In stark contrast to AtriCure’s claims, about a tenth of these procedures are performed on patients with preoperative AF, and the proportion of these procedures involving a concomitant ablation has steadily doubled to about 80% over the last decade, leaving little room for growth through further penetration. AtriCure’s inability to turn a profit, even as it dominates an almost fully penetrated market, suggests that its core business is simply structurally unprofitable.

Similar to what I wrote yesterday about Sunnova Energy (NOVA), I don’t know AtriCure or its industry well enough to have a strong opinion on this particular stock – but if I owned it, I’d be reading Kerrisdale’s report very carefully and thinking hard about taking some profits…

4) Later today, my family and I are driving home to New York City after spending a week at my extended family’s house on Lake Sunapee in New Hampshire. With the foliage at its peak, it’s amazingly beautiful here. I posted 16 pictures on Facebook – here’s a collage of my favorites: 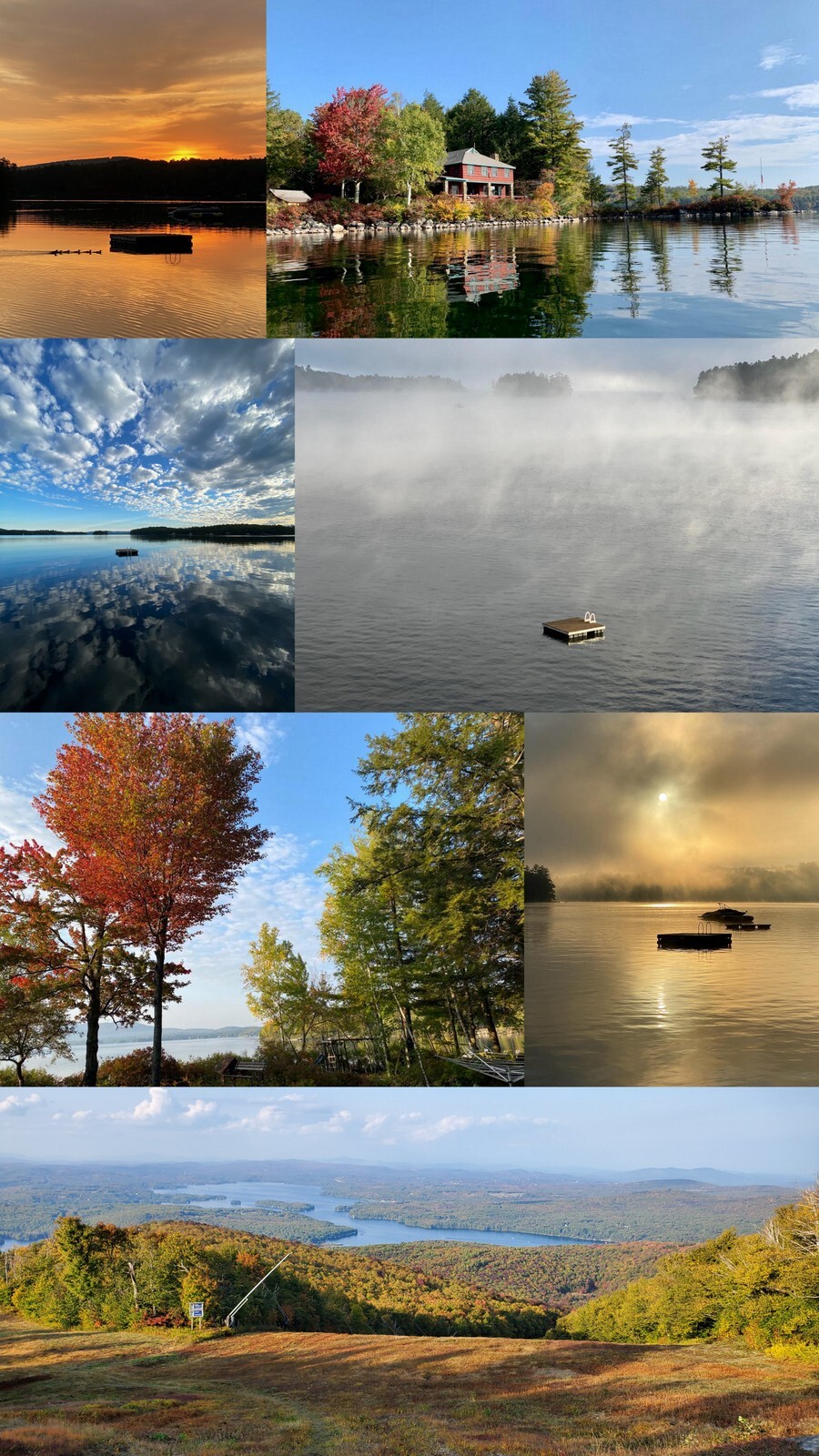