Berna Barshay's launch event; A blow-off top for AMC and the rest of my 'Short Squeeze Bubble Basket'; Cathie Wood's Bad Spring Is Only a Blip When the Future Is So Magnificent

1) In the two years since I launched Empire Financial Research, by far the two most important decisions I’ve made were persuading my long-time friends and fellow veterans of the hedge-fund world, Enrique Abeyta and Berna Barshay, to join me.

It is not false modesty when I say they have been the drivers of Empire’s success. Since Enrique and Berna joined the team, they’ve made most of the stock picks for our first two newsletters that we co-write, Empire Investment Report, where the average return of our recommendations is 45% versus 23% for the S&P 500 Index, and Empire Stock Investor (31% versus 22%).

When she joined a bit over a year ago, she launched our free Empire Financial Daily e-letter, where she’s been knocking the cover off the ball. She has given readers great insights and numerous stock recommendations showing huge gains, such as:

I’ll be joining Berna to discuss Empire Market Insider, how she finds big winners, and her first three investment ideas.

No sooner did I call another top in yesterday’s e-mail on 10 stocks in my revised “Short Squeeze Bubble Basket” than the stocks rose an average of 30% – in one day! – led by AMC Entertainment’s (AMC) 95% gain.

There’s no question in my mind what the endgame is here – a total collapse of these turds – but it’s highly irritating and stressful if you’re actually short them and they’re ripping your face off in the near term.

That said, I may have only been one day early – yesterday sure felt like a blow-off top…

Berna shared her usual trenchant insights in her daily e-letter yesterday: Here We Go Again… AMC Is the New GME, But This Time with Free Popcorn:

Put in context yet one more way… AMC is trading right now at a multiple of enterprise value (“EV”) to earnings before interest, taxes, depreciation, and amortization (“EBITDA”) of around 61 times, using 2019 EBITDA, which was unaffected by COVID-19.

Moving away from media to some other widely held favorites, you can own Amazon (AMZN) right now at an EV/2021 EBITDA of 21 times and Apple (AAPL) at 18 times. Does anyone truly believe that AMC deserves 3 times the multiple of two of the biggest and best-run companies in the entire world, both of which are expected to grow revenues by 30% this year?

Keep in mind that before the pandemic, AMC typically traded at an EV/EBITDA multiple between 7 and 8 times. Occasionally, it hit 10 times. Now, it’s 61 times.

This is just dumb… And it won’t end well.

I know this. But what I don’t know – and this is the key risk to betting on a return to rationality by shorting the stock, buying puts, or selling calls – is how long this can go on for…

So, what should investors do about AMC shares?

A couple of friends contacted me this week asking this very question. There’s no good answer for this. These shares shouldn’t trade at $60 and they shouldn’t even trade at $20, where they changed hands this time last week. There’s no realistic justification for this valuation… It’s all about supply and demand imbalances, which are almost by definition temporary… but often seem to last just until people can’t bear to stay short anymore.

As I told my friends, AMC is at best worth in the single digits… It might even yet be a bagel, that is, headed to zero in a future bankruptcy.

But could AMC shares go to $100 first? Sure, why not. They are already disconnected from reality. Once trading in fantasy land… why not $100? Why not $1,000? None of the “diamond hands” crowd is pulling out a calculator to figure out the share price based on a projection of 2024 EBITDA and applying a chosen enterprise multiple to that. It’s just the latest rocket ship…

To be honest, I’ve never seen anything like this in my nearly 30-year career in the markets. To me, with the banners and signs, we have officially crossed over into “weirder than GameStop” terrain.

While professional investors might want to wade into the treacherous waters of betting on a fall in AMC, I would recommend that non-pros just stay away. As I told a friend, “AMC stock is a slot machine now.”

If you chose to go long AMC shares, recognize that you’re gambling, not investing. And if you choose to go short, recognize that this may end up a case of “the market can stay irrational longer than you can stay solvent.”

3) Speaking of stocks to avoid, my friend Doug Kass, Berna, and I have warned investors for months about Cathie Wood and her ARK Invest funds.

The largest of these is the ARK Innovation Fund (ARKK), which is filled with oversized positions in highly speculative stocks. ARKK is still down 30% from its February peak but has caught a bounce in the past two weeks, so I’ll repeat my warning and cite a new red flag: The curse of being on the cover of a major magazine, which often happens right before a manager blows sky high…

Here’s the cover of the latest Bloomberg Businessweek: 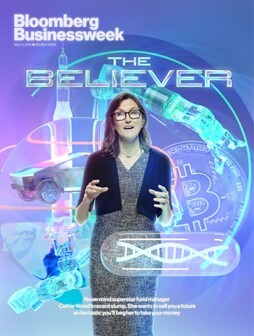 And here’s the accompanying story: Cathie Wood’s Bad Spring Is Only a Blip When the Future Is So Magnificent. Excerpt:

Wood’s always-online fans are sticking by her. Investors who poured a net $34 billion into ARK’s eight funds in the past 12 months have withdrawn only about $1.2 billion since the end of February. They’re betting that the world, emerging from COVID-19, will catch up to the future she proselytizes for. To the true believers, her sudden fame won’t be an oddball footnote in market history, like GameStop, but a forerunner to decades of glorious change. Just as Mary Meeker cheered early internet companies Yahoo! and Priceline.com as a Morgan Stanley (MS) analyst during the dot-com boom, Wood preaches a peculiarly American gospel of utopian change powered by capitalism.

She drives home her message with repetition. “We have a five-year investment time horizon,” she says over and over again, especially when her funds are dropping in value. Other Cathie Wood catchphrases get emblazoned on ARK merchandise, sold to the company’s more devoted clients with all profits going to charity. A T-shirt reads “Truth Wins Out”; a baby onesie says “Invest in the Future Today.” She spreads the word in a steady stream of videos, webinars, and commentaries posted on ARK’s website, along with frequent appearances at conferences and on media including CNBC, Bloomberg TV, and a variety of investing podcasts. Despite this, ARK turned down requests for an in-depth interview for this story.

As Wood and her company’s research frequently remind investors, electrification, the telephone, and the internal combustion engine turned the world upside down a century ago. Now, she tells anyone who will listen, five technologies – artificial intelligence, blockchain, DNA sequencing, energy storage, and robotics – are bringing about an equally profound transformation of the economy. These innovations will converge, recombine into things like autonomous taxis and whatnot, and create a perfect economic storm of higher wages, falling prices, and wider profit margins. That leads to “virtuous cycles” of more investment in faster innovation.

It’s a lot. And it may be familiar to anyone who remembers that other spasm of tech-stock fever, the dot-com bubble. But Wood’s got a riff ready for that, too. “The dream was right. It was just 20 to 25 years too early,” she often says. Now, “the seeds are beginning to flourish. We are ready for prime time.”