1) I continue to believe that Berkshire Hathaway (BRK-B) is America's No. 1 Retirement Stock.

But some folks are staying away because they're worried about the company's potential exposure to "business interruption insurance" and perhaps workers' compensation insurance as well.

The short answer is that nobody knows for sure what Berkshire's exposures are related to the current crisis until it reports earnings, but I'm not worried. With insurance companies, more than almost any other type of business, investors have to trust management – and there are no two people I trust more than Berkshire's CEO Warren Buffett and Vice Chairman of Insurance Operations Ajit Jain.

I'd say the same of Microsoft (MSFT) founder Bill Gates, who's been thinking about pandemic as long and as presciently as anyone. He and Buffett have been best friends since the day they met 29 years ago, and Gates served on Berkshire's board for the past 16 years until recently resigning to focus on his work at the Bill & Melinda Gates Foundation.

And Buffett himself has been thinking about pandemic risk for more than a decade, as you can see in this 2009 article: Warren Buffett bets on pandemic insurance. Excerpt:

Berkshire would consider writing insurance policies for pandemics, including one that Buffett said assumes the U.S. mortality rate rises by 25% in 2010, equivalent to roughly an additional 600,000 deaths.

The company paid out billions of dollars on claims losses from Hurricane Katrina, but will still assume big risks for the right price.

"You could get us to quote a policy on the present potential pandemic," Buffett said, though "you may not like" how much Berkshire would charge.

"You need someone with a real sense of the probabilities" to write such policies, he said.

3) What an outrage! There ought to be a law against this... Whiting Bosses Got $14.6 Million Bonuses Before Bankruptcy. Excerpt:

Chief Executive Officer Brad Holly will collect $6.4 million of the total, which will be "paid immediately," the company said in a filing Wednesday. Four other executives including Chief Financial Officer Correne Loeffler will get the rest.

The board signed off on the payouts March 26 as part of an overhaul of the company's variable compensation program. The coronavirus pandemic, coupled with a price war between Russia and Saudi Arabia, has dealt a crushing blow to the oil and gas industry, making it "virtually impossible" to set short-term performance goals, according to the filing.

4) I sent this last night to my coronavirus e-mail list (if you wish to join it, simply send a blank e-mail to: [email protected])...

Let's return (for the umpteenth time) to the issue of whether we can rely on China's self-reported data – in particular, the chart we shared on Friday – given the recent leaked report from U.S. intelligence about China faking its data. Here's the chart: 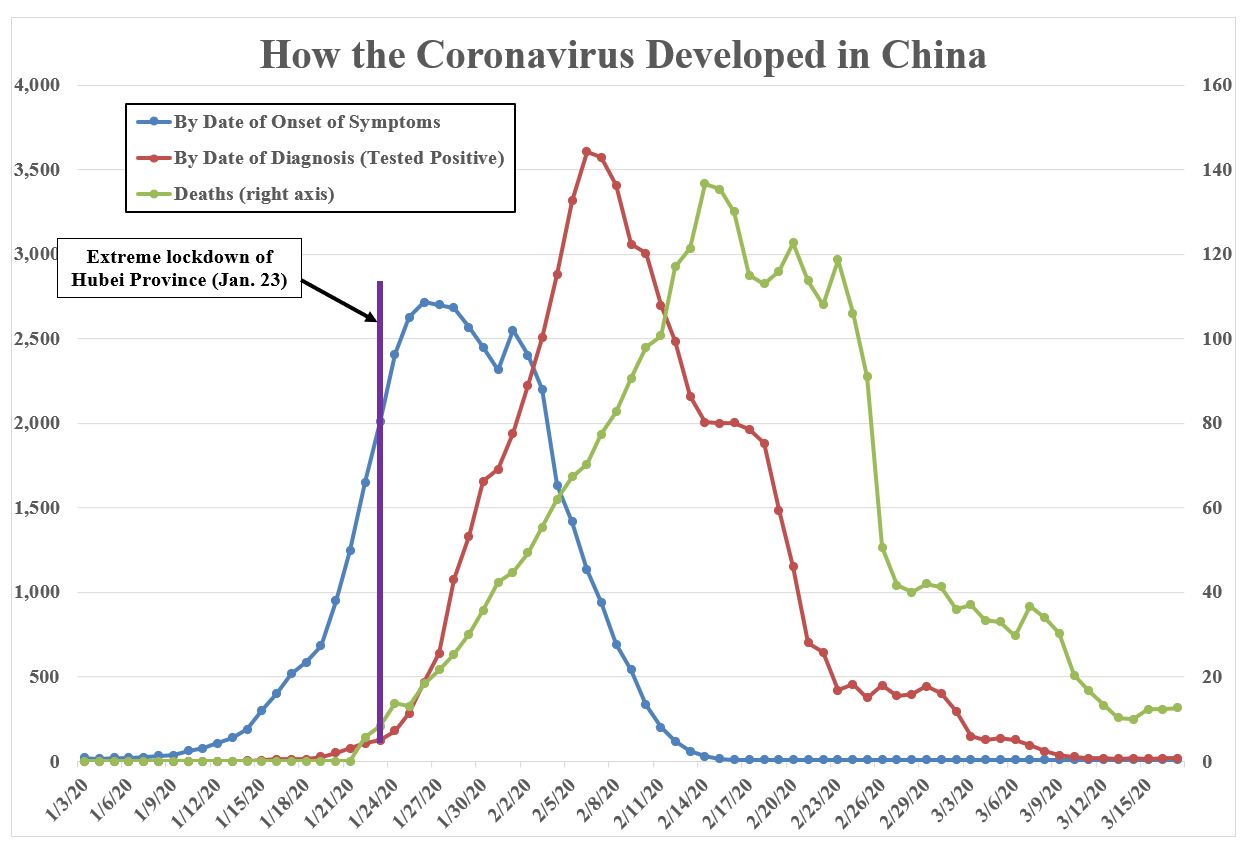 We share our readers' skepticism regarding the exact accuracy of the numbers China reports, but as I've said a zillion times already, unless they're off by a factor of 100 times or more, it doesn't matter! I am 99% confident that the data are within that range.

Please listen to someone who knows what's really going on, rather than whack-a-doodle conspiracy theories (I find it amusing/ironic/irritating that my readers who are most skeptical of China's data, are, I have little doubt, the least skeptical of our own media and government's "spinning" of data – take your pick, Fox "News" or MSNBC). Here are comments from my long-time friend and best source in China:

There may be some accuracy issues with the China data – especially early numbers in Wuhan during the chaos of December/early January, more local/remote areas around the country – but I believe it is highly unlikely that anything close to what some are speculating.

One problem that has created confusion with China's numbers is the differing definitions that have been used. I participated in a CEO webcast earlier this past week and presented the attached slides. I used In-Patient Cases and Under Medical Observation Cases data that we compiled on a daily basis during the crisis. Due to the lack of testing early on and the differing definitions, including for the February 12 adjustment to Confirmed Cases, I think these give a better sense of the overall situation in China than using only the ~80,000 Confirmed Cases number that is referenced more broadly. 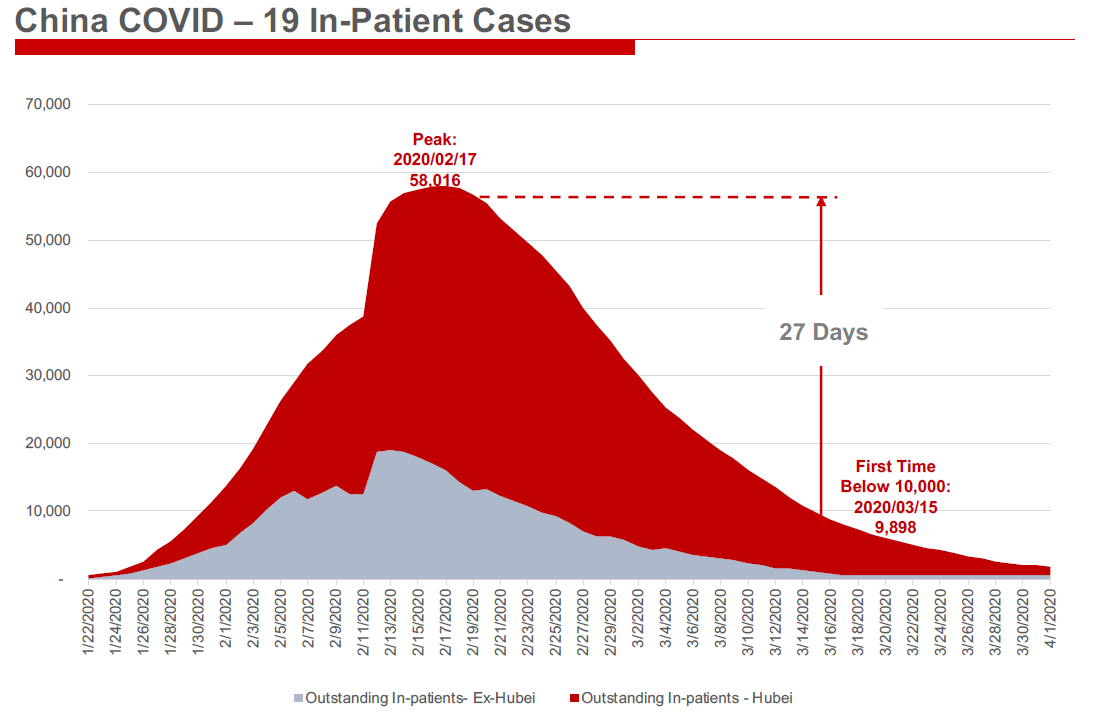 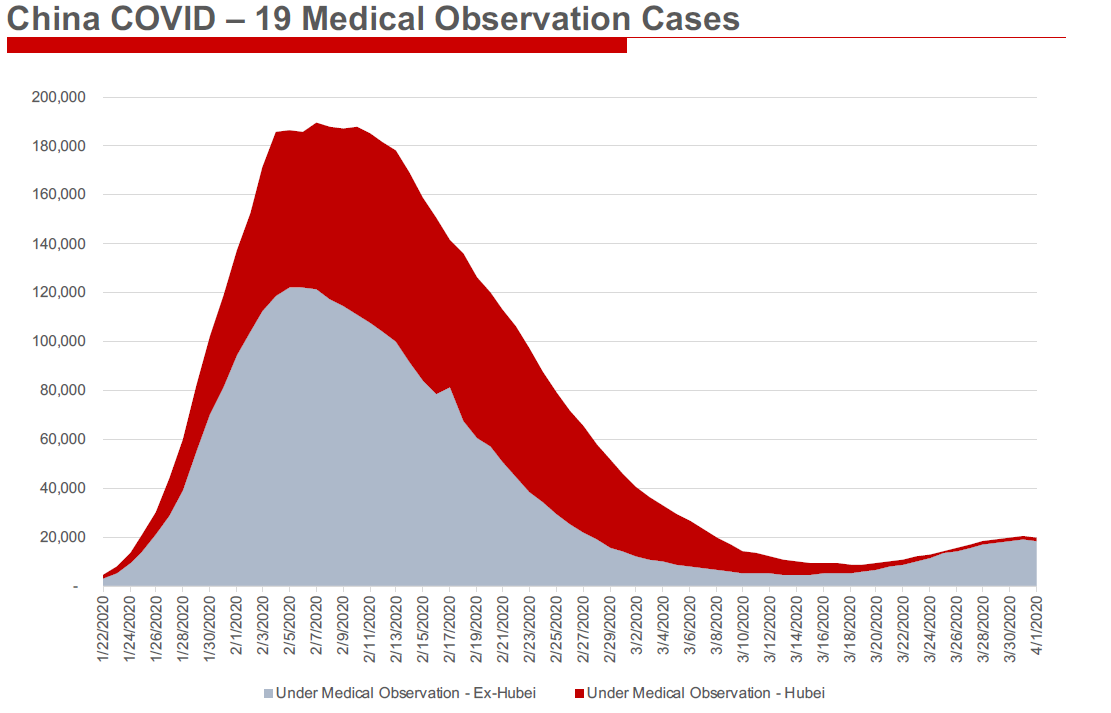 Information in China flows so much more freely than many think in today's social media connected world. Not sure if you are aware of Li Lu's tremendous efforts linking hospital leaders/practitioners in China with their counterparts in the United States. His initial webcast with incredibly detailed presentations by three hospital leaders from Wuhan and Shanghai to hundreds of their United States based counterparts and the follow up data and technical sharing is an excellent example as to how freely extraordinarily detailed and helpful information can flow across borders.

With life and death involved across so many parts of the country, I believe it would be impossible to have such a huge disconnect with the overall data as some are suggesting.

And here are comments from another great source, an ethnically Chinese Singaporean:

A few thoughts (if I sound confusing, maybe it is because I am ethnically Chinese and [it's] intellectually challenging to take sides):

1. China has more than 1.4 billion citizens to feed and social stability to maintain to prevent bigger catastrophe due to self interest. It is an open secret in the financial community and more broadly that Chinese data is often of low quality.

2. The data in China is often aggregated by 30+ provinces and 1,500+ smaller counties with poor data collection infrastructure, so might be unreliable just like the financial derivatives data in the U.S.

3. My personal view is that China has tough choices on many issues and is still struggling internally for reforms and transparency. With the trade war going on with the U.S., China is fearful of any epidemic and hit to its economic structure.

4. Look at how the U.S. just fired the Navy Captain for COVID-19 disclosure and reports of hospital staff being pressured to be silent [for risk of] being fired by management. It shows the complexity and sensitivity even for the U.S.

5. People shouldn't direct their blame unfairly at China or, worse, Chinese Americans. Racism is indeed very dangerous. As an Asian and long-time admirer of American values, I truly pray for rationality and compassion for most of the conflicts.

Another way to see if China's data makes sense is to compare it to other countries... So let's take a look at cases and deaths in South Korea, which has also now contained the virus (note there's no data for date of diagnosis, but we think it's not very important in light of South Korea's widespread testing): 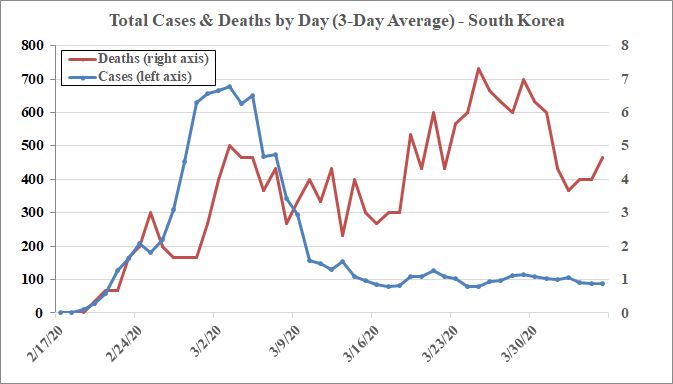 You can see that South Korea's pattern roughly follows China's, with cases ramping and with deaths a lagging indicator (though the numbers are so small as to be almost statistically meaningless).

Note that the difference between the peak of the date of onset of symptoms (or the date of diagnosis) in China and the peak of the death lines are 19 days apart (January 26 peak in onset of symptoms versus a peak in deaths on February 14). This is roughly in line with South Korea, which has a 22-day difference between its two peaks (cases peaked on March 3 and deaths peaked on March 25).

Now you see why I say that this is one of the great failures in American history...

Here are two of dozens of articles explaining this vastly different outcome (hint: it's not due to some "culture of compliance" they have that we don't – it was our complacency and wretched decisions): How South Korea Scaled Coronavirus Testing While the U.S. Fell Dangerously Behind and South Korea's Drive-Through Testing for Coronavirus Is Fast – And Free.

Turning to other countries, they also mirror China's trends...

Here's Italy on a rolling three-day average (which strips out some noise): 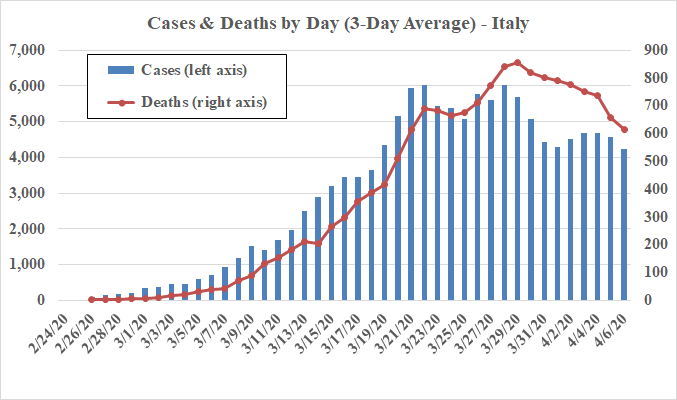 As you can see, cases and death peaks seem to have a difference of seven days (China's was eight days). And remember that Italy announced a lockdown on March 10. So the difference between the start of the lockdown and the peak in deaths was 19 days versus 22 days for China – all consistent.

And here are Spain's data: 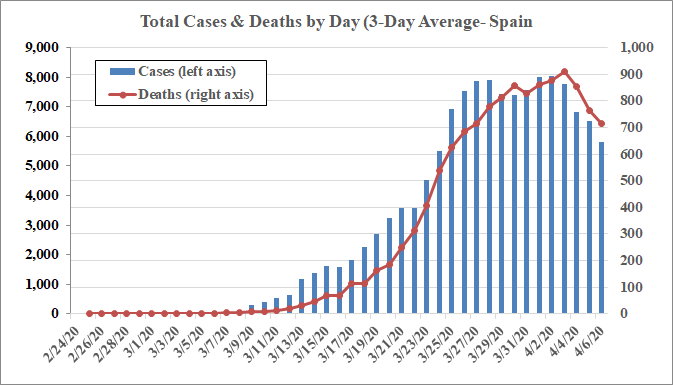 You could split hairs and say the peak in cases was the day before deaths peaked, but that's likely more due to testing capacity issues rather than reflecting the actual outbreak.

In conclusion, let's stop doubting China's data and instead focus on learning from the country – duh!