1) Berkshire Hathaway (BRK-A) reported impressive third-quarter earnings on Saturday (here are the release and 10Q). Glenn Tongue, my former business partner at T2 Partners and Kase Learning, shares his take on it:

Berkshire's earnings further reinforce our view that Warren Buffett has built a company that is unprecedented in terms of sustainability of earnings, balance sheet strength, and massive liquidity.

As we pointed out last quarter, the bottom-line results can be misleading due to a change in Generally Accepted Accounting Principles ("GAAP"), which now require unrealized gains and losses of the equity portfolio to be reflected in the income statement. Given that Berkshire has an equity portfolio of $238 billion, this change is causing big fluctuations in the company's reported net income.

In the first three quarters of this year, Berkshire reported net income of $52.3 billion, by far the highest of any company in the world, dwarfing Apple's $35.3 billion. But $30.1 billion of this simply reflected unrealized gains in Berkshire's stock portfolio (much of it from Apple, in a delicious twist).

This is a real gain in value for Berkshire shareholders, but it's not earnings on which one should put a multiple (in fact, one should discount the gains to reflect the taxes that will eventually have to be paid on them).

So, to summarize, ignore the headlines and focus – as we've always done – on the two drivers of Berkshire's value: cash and investments per share (valued at par/market) plus pre-tax earnings of the operating businesses, to which one applies a multiple.

Regarding the former, we estimate that Berkshire's cash and investments grew to $385 billion, or $235,700 a share, as of the end of the third quarter.

As for the earnings of the operating businesses, here's the key chart (from page 27 of the 10Q): 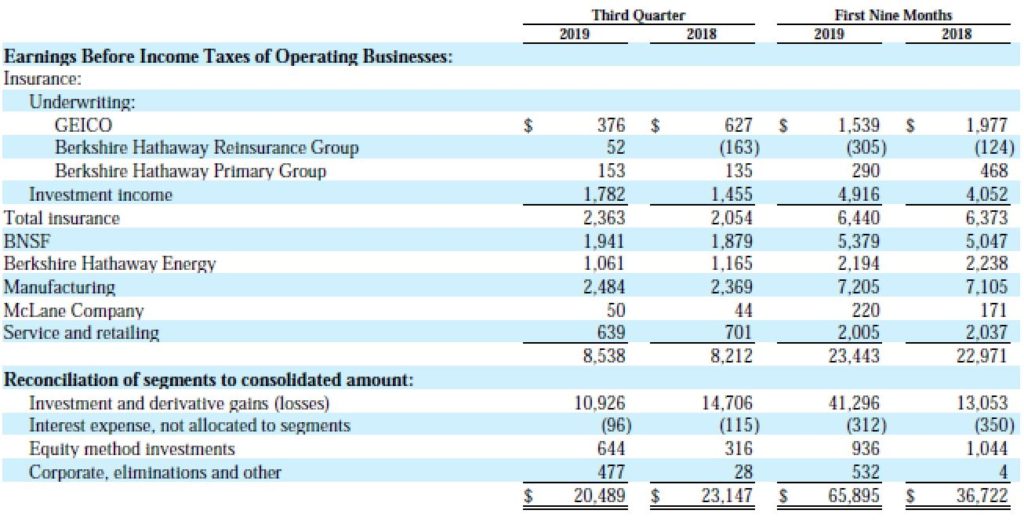 As you can see, investment income, representing interest on cash and bonds, as well as dividends from the stock portfolio, rose 22%, from $1.46 billion to $1.78 billion. Beyond this, the pre-tax earnings of Berkshire's operating business were a healthy $6.8 billion, essentially flat year over year.

Berkshire invested $12 billion in equity securities during the quarter, most of which was a negotiated $10 billion investment in preferred stock of Occidental Petroleum (OXY), which pays a juicy 8% coupon – very attractive in today's rate-starved world.

Berkshire's biggest challenge remains finding attractive investments for its ever-growing war chest. Cash and equivalents now stand at an astonishing $128 billion, and float rose to $127 billion, up $4 billion this year.

Share repurchases were a paltry $700 million during the quarter and $2.8 billion for the year. But interestingly, the repurchase price per share in September was approximately $310,000. Keep in mind that Buffett doesn't buy anything unless he believes he is getting a bargain, so while Friday's closing price of $323,400 isn't screaming cheap, it's still a solid entry point.

My updated math on Berkshire's intrinsic value is $235,700 per share of cash and investments and annualized pre-tax earnings per share of $14.4 billion. To this, I apply a 12x multiple – though I think a market multiple is conservative for this high-quality collection of businesses. This results in an intrinsic value of $408,500, or about 25% above today's level.

2) Speaking of Berkshire, this is a funny story: That Time Warren Buffett's Investment Was Blocked by Bank of America's Call Center. Excerpt:

The bathtub epiphany that led Warren Buffett to pump $5 billion into Bank of America after the financial crisis has been retold many times. Now, a new detail is emerging in the Wall Street fable.

In an interview with Bloomberg Television, Bank of America Chief Executive Officer Brian Moynihan recalled how Buffett initially tried to reach his company with a proposal eight years ago. The legendary investor called a public phone line and was rebuffed.

"He got into the call centers and asked to speak to me and of course they don't transfer everybody who calls the call centers to the CEO's line," Moynihan said in an interview for broadcast on "The David Rubenstein Show: Peer to Peer Conversations." Yet the deal still came together within hours.

3) I can't wait to read this new book: The Man Who Solved the Market: How Jim Simons Launched the Quant Revolution. Here's a Bloomberg article about it: How Jim Simons Built the Best Hedge Fund Ever. Excerpt:

Every now and again, a book comes along that is so compelling, filled with so many fascinating characters and new information, that it demands a review.

The Man Who Solved the Market: How Jim Simons Launched the Quant Revolution is just such a book. Written by Wall Street Journal reporter Greg Zuckerman, it is a history of Simons and the secretive hedge-fund firm he founded, Renaissance Technologies LLC. Zuckerman spent 2 1/2 years researching the firm, eventually speaking to more than 40 current and former Renaissance employees. Despite the misgivings and deep opposition to this (or any) book about his career, Simons eventually agreed to sit for more than 10 hours of interviews.

The result is the definitive examination of the enigmatic Simons, filled with page after page of previously unknown details about Renaissance Technologies. As a longstanding Simons fan, I had devoured everything public about him and his firm. Much of what is in this book is new.

Start at the end. In Appendix 1, Zuckerman painstakingly reconstructs the 30-year track record of the firm's crown jewel, the Medallion Fund. Although rumors of its performance have long circulated on Wall Street and in the press, the actual numbers are even more mind-blowing: From 1988 to 2018, Medallion returned 66.1% annually before fees. Net of fees, the gains were 39.1%. Estimated trading profits during those 30 years amounted to $104.5 billion. About those fees: If the standard hedge fund management fee of 2% of assets under management, plus 20% of the profits sounds expensive, then what do you think of Medallion's "5 and 44"?

Simon's personal net worth, according to Zuckerman's calculations, is more than $23 billion.

And here's one in the Wall Street Journal: The Making of the World's Greatest Investor. Excerpt:

Today, Mr. Simons is considered the most successful money maker in the history of modern finance. Since 1988, his flagship Medallion fund has generated average annual returns of 66% before charging hefty investor fees – 39% after fees – racking up trading gains of more than $100 billion. No one in the investment world comes close. Warren Buffett, George Soros, Peter Lynch, Steve Cohen, and Ray Dalio all fall short.

A radical investing style was behind Mr. Simons's rise. He built computer programs to digest torrents of market information and select ideal trades, an approach aimed at removing emotion and instinct from the investment process. Mr. Simons and colleagues at his firm, Renaissance Technologies LLC, sorted data and built sophisticated predictive algorithms – years before Mark Zuckerberg and his peers in Silicon Valley began grade school.