Back from Australia; Berkshire Hathaway underperformance versus the S&P 500; Scott Galloway on 'FckdEx' and Unremarkables; Question No. 11 to ask before you marry someone

1) I hope you had wonderful holidays and a happy new year!

I just got back from an amazing two weeks with my family, visiting Australia for the first time. I've posted pictures and descriptions of our trip on Facebook here, here, here, here, and here.

It's a fantastic country, though currently much of it is on fire. To see how the smoke has affected the skyline in Melbourne, see my pictures here. And for perspective, check out this graphic that superimposes the country and the fires on top of the continental United States. Can you imagine this much of our country being on fire?! 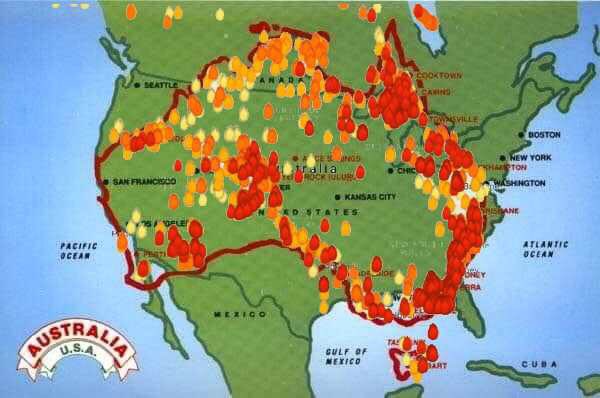 2) Some interesting data in this tweet that reinforces why I like Berkshire Hathaway's (BRK) stock so much right now: 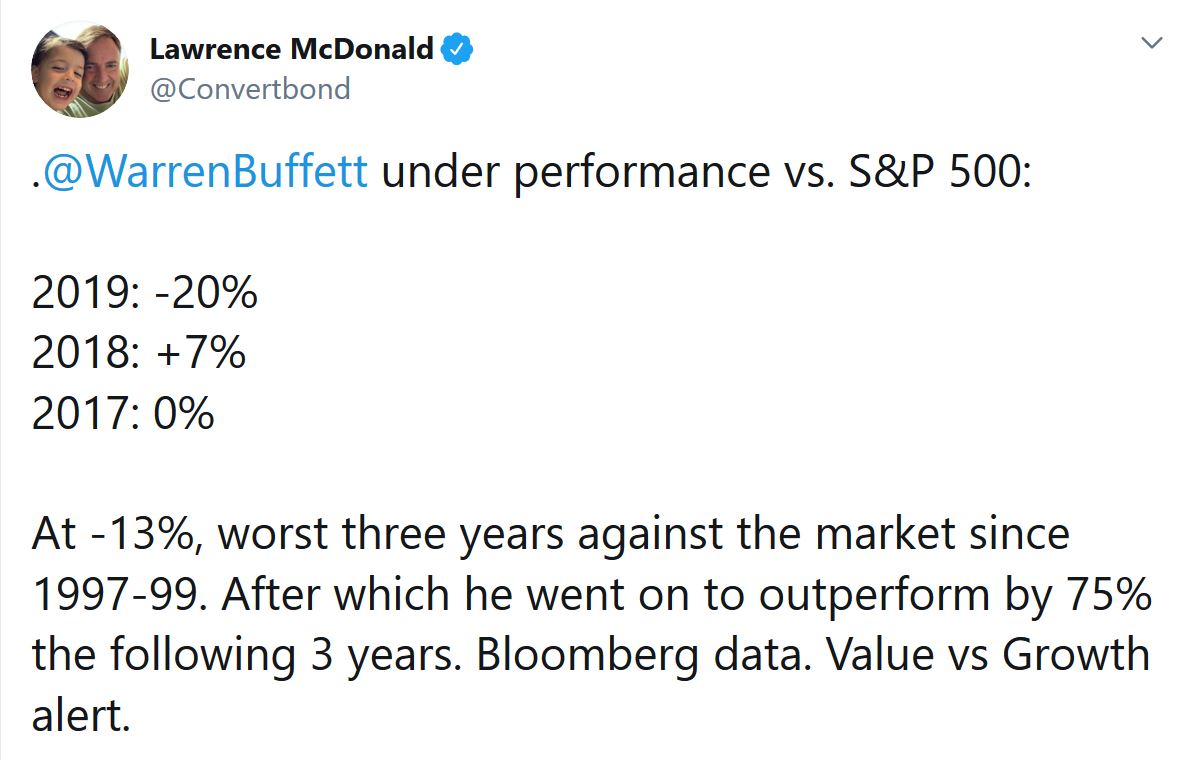 3) One of my favorite writers is NYU marketing professor, bestselling author, blogger, and entrepreneur Scott Galloway. I really enjoyed two of his recent blog posts. The first, "FckedEx," is about logistics giant FedEx (FDX). Excerpt:

In the next 24 months, FedEx will either be acquired or lose an additional 40%+ in value. The likely acquirer is Walmart. The gangster move: a merger with Shopify.

In July 2017 we predicted, "If Bezos tomorrow said, 'We see overnight delivery as a huge opportunity,' the $150 billion of market cap of DHL, FedEx, and UPS would begin leaking to Amazon."

This has happened. Since the launch of Amazon's delivery service in February 2018, FedEx has lost $25 billion (39%) in value, despite the S&P's 24% gain. Amazon has added $240 billion (33%). In less than two years, Amazon captured nearly one-fifth of the market for e-commerce deliveries in the U.S.

Since 2014, U.S. e-commerce has increased 84%, creating a massive opportunity for the delivery industry. But instead, there has been a transfer of wealth from FedEx, UPS, and the U.S. government to Amazon.

4) Galloway's second post, "Unremarkables," draws on his own experience. It's about how our educational and economic system has gotten a lot tougher for all but the lucky few. What provocative and trenchant insights! I especially liked this line: "It's never been easier to become a billionaire, or harder to become a millionaire." Excerpt:

There has never been a better time to be remarkable, nor a worse time to be unremarkable.

People who highlight that the average American is better off than the richest person 100 years ago are, similar to someone telling you to follow your passion, already rich. The poor in the US have not progressed much, and there is still an apartheid-like disparity in household wealth among the races.

The wealthy have done well, in a supernova kind of way. A ton has been written on this, so just one data point: the top .1% capture more wealth than the bottom 80%. For purposes of self-preservation you'd think the uber-rich would be concerned with this level of income inequality. At some point, the bottom half of the globe by income realizes they can double their wealth by taking the wealth of the richest 8 families, who have more money than 3.6 billion people…

I'm staying with friends at the Yellowstone Club in Montana, where the .1% congregate. It would be easy to be cynical about the crowd and experience. There is a cartoon that very wealthy people are generally assholes. They are not. My experience is most very successful people have a few things in common: grit, luck, talent, and a tolerance for risk.

Yes, most people, including the .1%, will use their skills and resources to ensure their firm has an advantage over others, even if that means turning a blind eye to externalities (environmental standards, monopoly abuse, tax avoidance, teen depression). Affixing your own oxygen mask before helping others is a decent tagline for capitalism.

Yet most successful capitalist systems acknowledge that without rule of law, empathy, and redistribution of income, we lose the script. The purpose of an economy is to build a robust middle class. We have, traditionally, elected leaders who cut the lower branches off trees to ensure other saplings get sunlight. There is less and less sunlight. It's never been easier to become a billionaire, or harder to become a millionaire.

And you can sign up to receive Galloway's posts for free on his No Mercy/No Malice blog.

5) Question No. 11 to ask before you marry someone:

Has he or she had long-term relationships in the past? How have they ended? What would previous boyfriends or girlfriends say about him or her?

When deciding whether to raise children and spend the rest of your life with someone, you should be less concerned with how someone is 99% of the time, but rather what his or her worst 1% looks like. Observing or talking to ex-partners is a good place to start…