Avoid the crypto sector as Tether's problems grow; Pressure on housing and office space; Why and how I travel so much

1) If you've held bitcoin (BTC), ethereum (ETH), or pretty much any other cryptocurrency over the past month, congratulations on making a quick gain...

But as investing legend Charlie Munger once said:

If you run through a dynamite factory with an open torch and happen to make it to the other side without blowing yourself to kingdom come, that doesn't mean it was a good idea!

I continue to pound the table to avoid all cryptocurrencies because I think there is a better than 50-50 chance that the Tether (hilariously misnamed) "stablecoin," which underpins the entire market, will "break the buck" – triggering an immediate crash across the sector.

The odds of this have gone up recently in the aftermath of the bankruptcy filing of the Celsius crypto network. It turns out that Tether (USDT), contrary to its stated policy of investing only in safe assets, extended an $840 million loan to Celsius, secured by bitcoin.

As Celsius began to collapse, Tether liquidated the bitcoin collateral and fully recouped its loan, but this is now being challenged in bankruptcy court, as this Financial Times article explains: Tether's recovery of an $840mn loan scrutinized in Celsius bankruptcy. Excerpt:

Resolving the questions around Tether's loan and other crypto-secured borrowings will involve intricate issues about how rules on secured loans apply in the digital asset market. In secured lending, the borrower pledges assets to the lender as collateral.

"We're in an area where the law is quite uncertain and quite at odds with the market's general expectations," said Brandon Hammer, a bankruptcy lawyer at Cleary Gottlieb.

Many in crypto markets have wrongly assumed that simply taking possession of crypto pledged as collateral will protect their position as a secured lender under bankruptcy law, Hammer said.

In fact, they could still be forced to return the assets, leaving them only with an unsecured claim equal to the value of the loan...

The liquidation is likely to be scrutinized by Celsius and the committee that will be formed in the bankruptcy proceeding to represent unsecured creditors, bankruptcy lawyers have said.

"One of the things that's going to be examined is whether or not Tether was fully secured. Did Tether properly perfect its security in its collateral?" said Tad Davidson, co-head of the bankruptcy practice at Hunton Andrews Kurth.

Lenders who have not properly established their claim over particular assets – a process called "perfecting" – can find themselves relegated to the mass of unsecured creditors in bankruptcy at the bottom of the pile, potentially suffering huge losses.

Pause for a moment and consider what this implies about Tether, its business operations, the nature of the reserves allegedly backing its stablecoin issuance "dollar for dollar," and the price of Bitcoin.

Tether issued a massive quantity of USDT tokens in return for a loan backed by Bitcoin. We were led to believe Tether issued stablecoins only in exchange for fiat currency (like US dollars), and the company invested in ultra-safe interest-bearing instruments. Where is the fiat currency in this transaction? How widespread is this practice? In theory, holders of Bitcoin can pledge their assets to Tether, receive USDT tokens, buy more Bitcoin, and pledge it again for another loan. The net effect is to push the price of Bitcoin higher in what amounts to a digital token perpetual motion machine...

The question of just how entangled Tether will become in the Celsius bankruptcy proceedings is one that projects significant potential trouble on the horizon for the stablecoin operator. Tether has notoriously avoided scrutiny of its operations. Despite promising to perform an audit of its reserves for years, it never quite gets done. Most recently, Tether claimed an audit was once again forthcoming, this time promising it would be led by a "Big 12" auditing firm (whatever that means). If seeing an audit through to completion is too unpleasant of a proposition, imagine how Tether will hold up under the forced scrutiny of a pack of aggressive bankruptcy attorneys...

By liquidating Celsius' collateral just before the bankruptcy filing, did Tether make itself subject to the very scrutiny it has desperately evaded for years?

2) Though home prices are still rising, the sector is clearly slowing down dramatically thanks largely to higher interest rates.

The chart in this tweet shows the sharp decline in existing, new, and pending home sales: 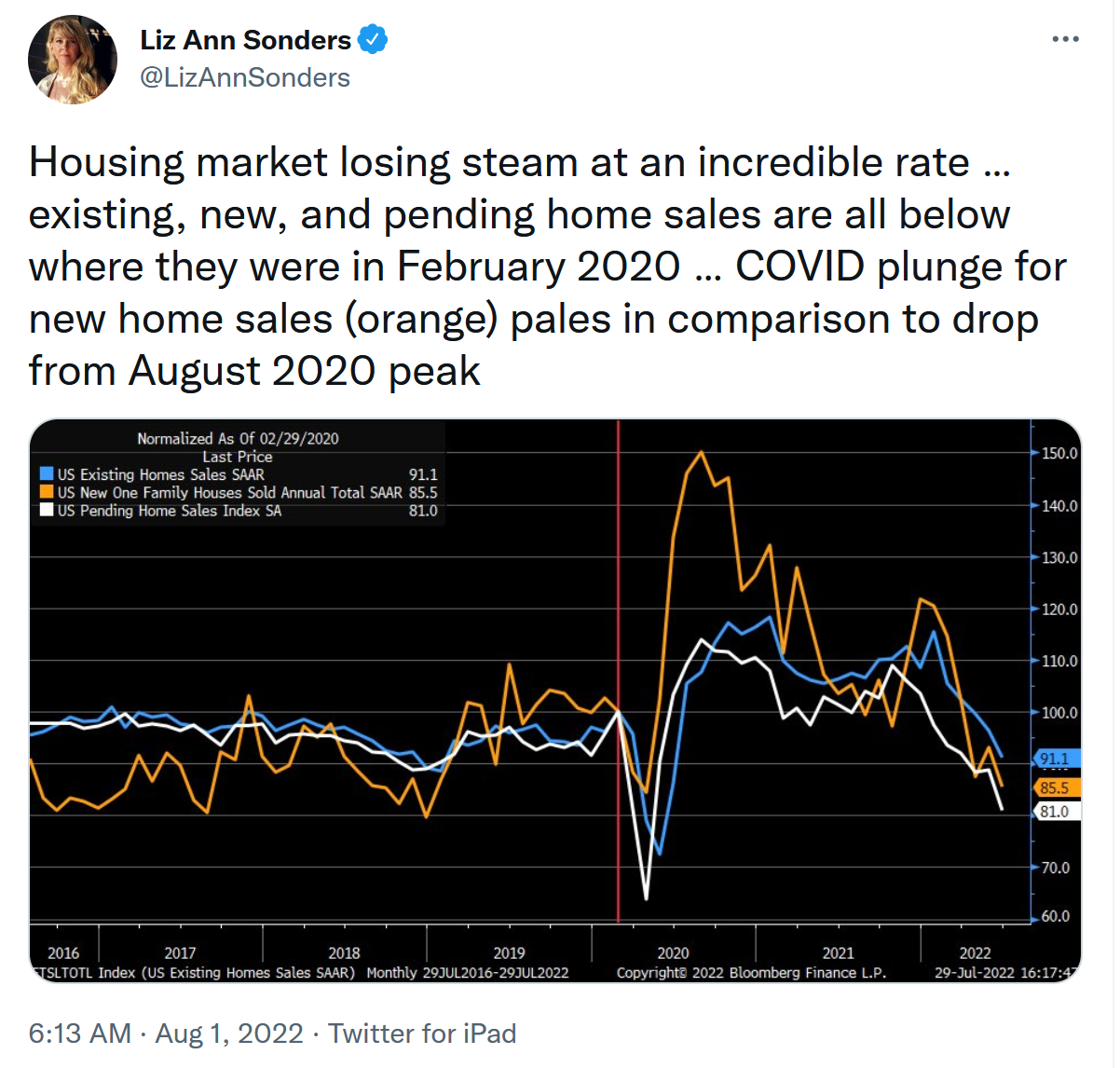 I'm not fully bearish on the housing market because mortgage rates have pulled back a bit and the supply-demand imbalance due to years of underbuilding persists. However, things don't look good for commercial office space.

Here's a Twitter thread by Andy Berman, which begins: 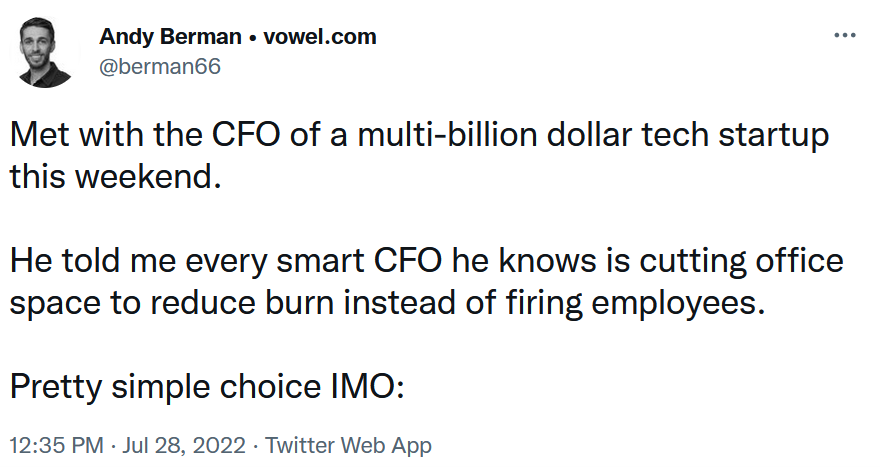 In 2022, office space seems like a particularly terrible use of funds, especially in expensive cities. Cost per square foot in big cities like San Francisco can be upwards of $87. Each employee needs ~100-150 sq ft of space in an office, meaning that it costs >$13,000 per employee annually. That doesn't include the cost of amenities or furniture. With an office of 500 people, that's $6.5M/year! At $130k fully loaded salaries, that's the same as 50 jobs.

What this CFO told me – is they saw only 2% of their employees come into the office on a given day. Their investors said the choice was obvious. Cut the office space.

Yelp (YELP) and Salesforce (CRM) have made the same decisions, seeing the obvious trends in office utilization.

How can you spend investor capital on costly offices and lay off employees?

If you can hire remotely and get access to a competitive talent pool, why would you not shed office space, focus on retreats and re-invest the savings?

And the kicker? This CFO told me they have seen an increase in productivity + applicants for open roles. It's a win-win-win

3) Observant readers may have picked up on the fact that I travel a ridiculous amount...

In the past two-and-a-half years, I've been to 15 countries, gone rock climbing/mountaineering 60 days, skied 40 days, competed at the National Senior Games in tennis, done the 24-hour World's Toughest Mudder for the fifth time, etc., etc., etc. In total, I've been away from my home in New York City about half the time.

Which raises the question: Why?

In part, the answer is that I've always loved to travel. My parents met and married in the Peace Corps in the Philippines in 1962, and I spent most of my childhood in Tanzania and Nicaragua (three years each).

I can't remember a single vacation in which we stayed home. Instead, we were flying or driving somewhere, including going cross country five times during the summers when I was 10 to 15 years old in this 1977 Volkswagen camper, which, believe it or not, we still have: 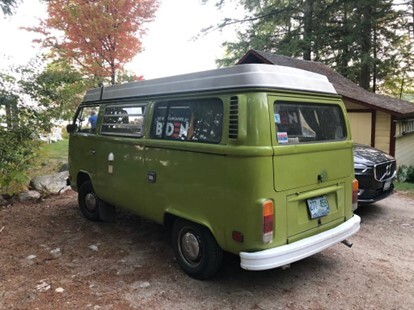 But my travel bug is also in part due to the way I'm wired.

Roughly 25 years ago, I went to a week-long leadership development program called The Center for Creative Leadership with two dozen other executives. They observed us as they ran us through a variety of exercises and gave us a battery of tests. I remember the results of one in particular: Of the 35,000 or so people who'd ever taken the test, they said I scored the all-time highest on "need for new stimulation."

In addition to manifesting itself in near-constant travel to new places, it also explains why I ended up in the investment business, as there are new developments every day to investigate and analyze.

The other question about my extreme travel schedule is: How? How can I run a business when I'm constantly on the road? The answers: a) I have a great team... and b) 90%-plus of my work is reading/listening and writing, which I can do from anywhere.

And how do I maintain my marriage, which is still going strong after nearly 29 years, in light of all this travel? The answers: a) Susan is endlessly patient... b) she comes with me about half the time... c) I suspect it helps our marriage when I'm not in her hair all the time... and d) I'm quite certain that she prefers the company of Rosie (the Wonder Dog) and Phoebe (the Wonder Pup) to me – they certainly are much cuter! 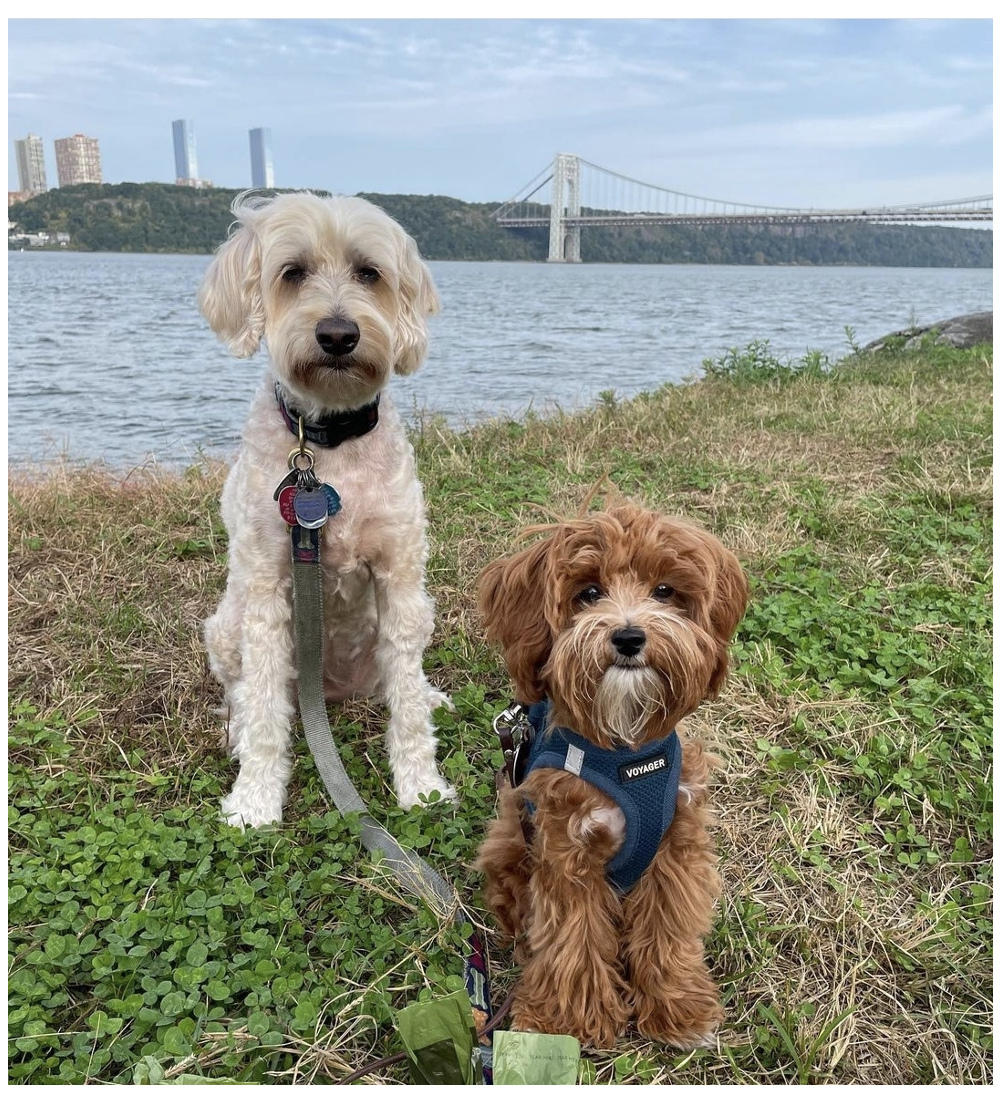