At Last, Weight-Loss Drugs That Actually Work; Is Eli Lilly a buy?; Tether Ordered to Produce Documents; Federer farewell at the Laver Cup

1) I've recently become aware of three new weight-loss drugs, which appear to be nothing short of miraculous, especially Mounjaro (tirzepatide), which seems to have fewer side effects (mostly gassiness) and results in the greatest weight loss (see the first chart in the Barron's article excerpt below).

I know many people on these drugs and they're all thrilled with them, having lost large amounts of weight with few side effects (though one friend wrote that a family member was hospitalized "due to a series of strokes that were a direct result of taking one dose of Mounjaro," so, as always, consult a doctor and make sure you're monitored).

My friends also say it's covered by their health insurance, though apparently not Medicare or Medicaid yet. The main issue is getting access to the drugs, as demand is skyrocketing and the drug companies can't make them fast enough.

The drugs work by simply suppressing appetite. If you go out to a restaurant and are served a big plate of something, instead of eating all of it, you'll only eat half. You don't have to change your diet – you just eat everything you normally do, but less of it.

Here's the Barron's article about them: At Last, Weight-Loss Drugs That Actually Work. They Could Be the Blockbusters of the Decade. Excerpt:

After all of the diet, supplement, and workout fads we've endured, we're about to have drugs that are safe and effective. They're our best hope yet for stemming the obesity epidemic that threatens the lives of 100 million Americans and half a billion people worldwide.

No one has ever seen the kind of weight loss achieved by these new drugs, known as incretins. In scientific studies, they have let people safely shed more than 20% of their weight. Incretins could become the best-selling drugs in pharmaceutical history for their competing developers, Novo Nordisk (NVO) and Eli Lilly (LLY). The companies' stock market valuations reflect high hopes. But those hopes are merited.

If every hefty American got treated at these drugs' current prices, the annual market for incretins would be a trillion dollars. Insurers can't afford that, of course, and access to the new drugs is highly restricted. But there's plenty of room for prices to come down and still reward Novo and Lilly shareholders. The drugs will be widely used if studies can show they prevent diabetes, heart disease, and other costly ills.

Novo Nordisk and Lilly – rivals for a century – originally developed incretins to treat Type 2 diabetes. The drugs also turned out to promote weight loss. When Novo got U.S. approval last year to market the injectable drug semaglutide for obesity, under the brand name Wegovy, demand was so strong that Novo stock rose 50% over the following year, to hit a peak this year near $122 and an earnings multiple some 70% above most of its pharma peers.

Lilly is hot on its heels with tirzepatide, which is also administered via a weekly injection. It enabled people to lose an average of 21% of their weight in a study reported in June. 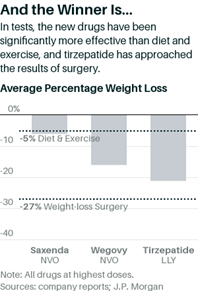 While not yet approved for weight loss, tirzepatide is one reason that Lilly is Wall Street's favorite drug stock. At its recent price around $300, Lilly trades at 34 times the consensus forward 12-month earnings forecast, or twice the average multiple of its sector.

Investors' esteem for the stocks has climbed on estimates that annual sales of incretins for diabetes and obesity could top $50 billion or $60 billion by the start of the next decade, split by a duopoly of Lilly and Novo. For perspective, a drug is often considered a blockbuster if it generates $1 billion a year in sales. The AbbVie (ABBV) product Humira is currently the world's top-selling drug, with over $20 billion in annual sales.

The sales will be well deserved, as incretins appear to be the best shot at dealing with the dangerous weight problem of developed nations like the U.S. The percentage of American adults who are obese – or dangerously heavy for their height – has risen from 13% to 43% in the past 60 years. That's more than 100 million people in just the U.S. The average American male now weighs 200 pounds, up from 166 in 1960. The average female is 171 pounds, up from 140. 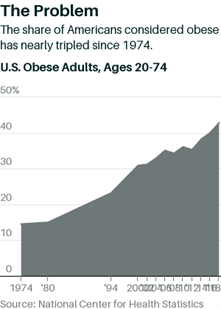 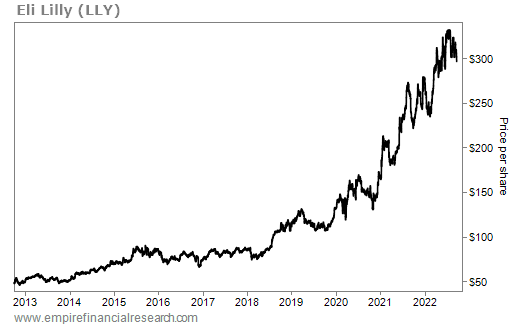 This is a great company with a bright future – especially with Mounjaro – but those are some very rich multiples... so I'm not a buyer today. That said, I wouldn't argue with anyone who wanted to establish a starter position on the thesis that trailing 12-month revenue is $29 billion, and Mounjaro alone could equal that.

But I'm going to stay on the sidelines for now and hope for a pullback...

3) While the prices of cryptocurrencies have bounced off their mid-June lows, they're still far below where they were when I first warned about them on May 12 (bitcoin and ethereum are both down 36% since then).

In my e-mail that day, under the heading "Sell your cryptos," I explained why 13 months earlier, in the April 2021 issue of our flagship Empire Stock Investor newsletter, we recommended buying ethereum (ETH), and why I had changed my view and concluded that "the odds of a very bad outcome have clearly risen quite a bit, so my spidey sense is telling me that it's time to get out and wait for another time to rejoin the game."

In particular, I warned in that e-mail and many subsequent ones that the largest (laughably misnamed) "stablecoin," Tether (also known as USDT), "isn't as big of a scam as Terra was – at least Tether has some assets backing it – but it's still an obvious, total scam."

Tether has been ordered by a U.S. judge in New York to produce financial records relating to the backing of USDT as part of a lawsuit that alleges Tether conspired to issue the stablecoin as part of a campaign to inflate the price of bitcoin (BTC).

The order requires Tether to produce "general ledgers, balance sheets, income statements, cash-flow statements, and profit and loss statements" as well as records of any trades or transfers of cryptocurrency or other stablecoins by Tether including information about the timing of the trades.

It also orders Tether to share details about the accounts it holds at crypto exchanges Bitfinex, Poloniex, and Bittrex.

While attorneys representing Tether moved to block the order to release, calling it "incredibly overboard" and "unduly burdensome," the presiding judge disagreed, writing that the "documents Plaintiffs seek are undoubtedly important."

"[The] Plaintiffs plainly explain why they need this information: to assess the backing of USDT with U.S. dollars," wrote Judge Katherine Polk Failla.

"The documents sought in the transactions RFPs appear to go to one of the Plaintiffs' core allegations: that the... Defendants engaged in cyptocommodities transactions using unbacked USDT, and that those transactions 'were strategically timed to inflate the market,'" the judge continued.

I agree with activist short seller Nate Anderson, who tweeted this:

In the meantime, continue to avoid all cryptos.

4) Susan and I are flying to London tonight to see the Laver Cup tennis tournament this weekend. The lineup for this Europe-versus-the-rest-of-the-world event is amazing:

As an added bonus, this will be Roger Federer's farewell. It was just confirmed that Federer's final match will be on Friday night, playing doubles with his longtime friend and rival, Rafael Nadal, against Frances Tiafoe and Jack Sock. What a match that will be – we can't wait!

I was sitting in Federer's box at the inaugural Laver Cup in Prague in 2017 and snapped this picture of him after he'd won the Cup-clinching final match, fighting off a match point, against Nick Kyrgios: 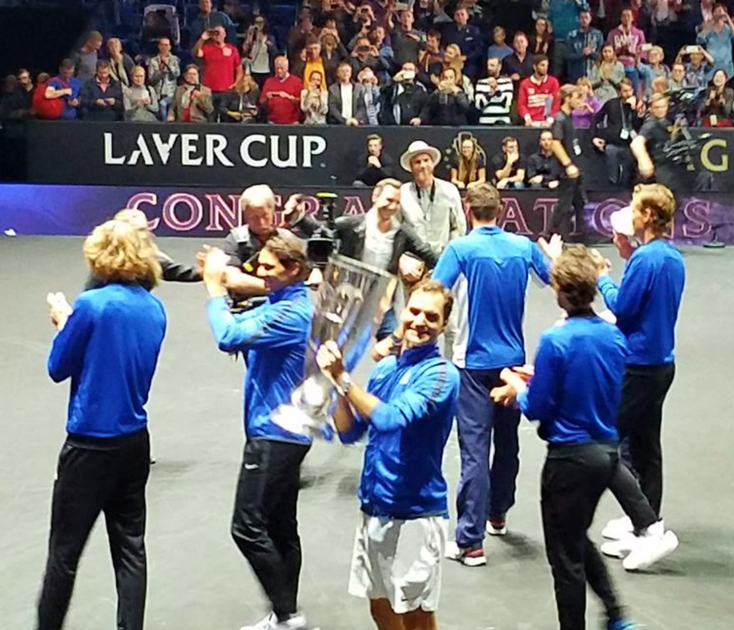 And here's a picture of my dad and me at last year's Laver Cup in Boston (that's Federer in between us): 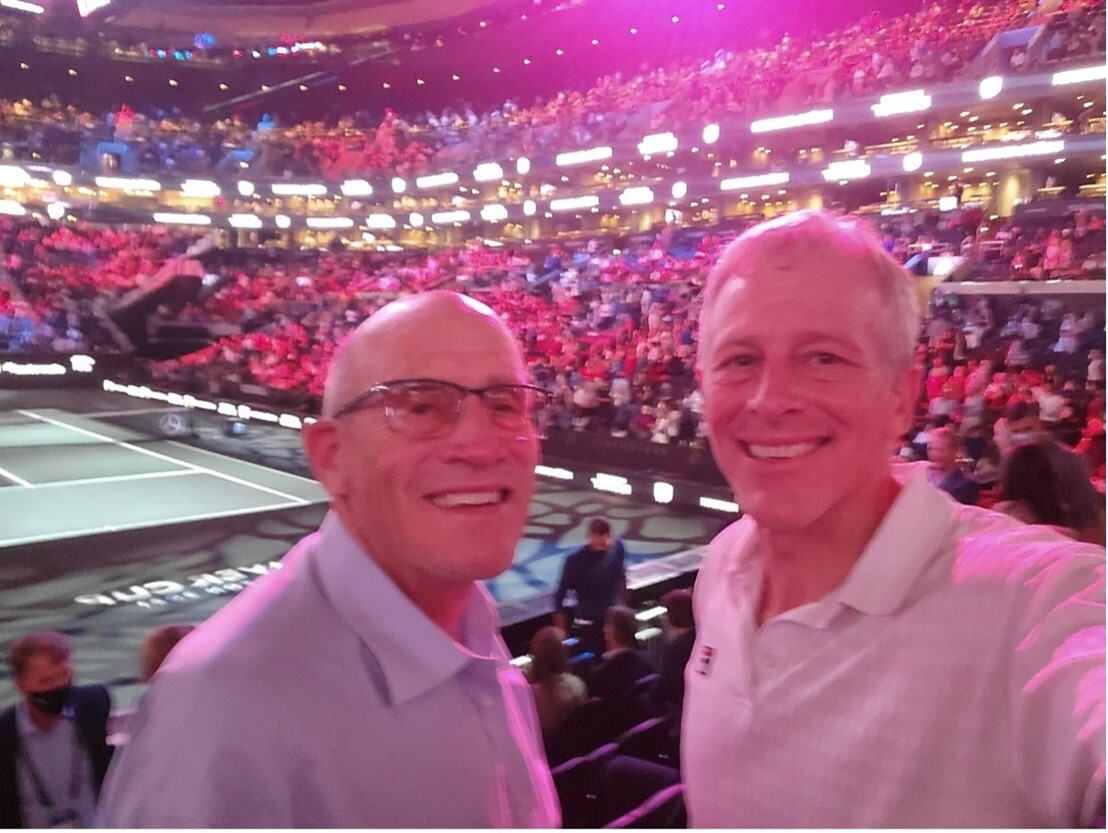