Are we in a recession?; Why I'm moderately bullish; Keep Sweet: Pray and Obey

1) There's a raging debate over whether we're in a recession. According to the traditional definition – two consecutive quarters of negative GDP growth – we are.

But most economists use a broader, more subjective definition that incorporates a number of factors... and here, the picture is better.

For example, as this article notes (Is the 2022H1 GDP Decline... Fake?), gross domestic income hasn't declined at all:

The price-adjusted value of the goods and services produced in the United States was 0.6% lower in April-June 2022 compared to the seasonally-adjusted peak in October-December 2021. Real gross domestic product (GDP) has ostensibly been falling for two quarters in a row.

But gross domestic income (GDI), which is published by the same government agency that compiles GDP, implies that the U.S. economy has been growing continuously since the end of 2021. 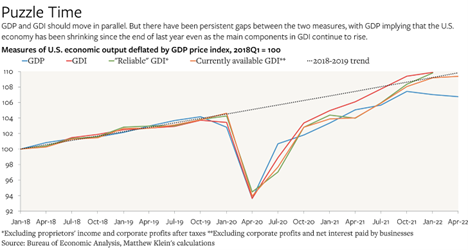 This disconnect is unusual, although there are precedents, especially around downturns. But for now, it poses a serious puzzle.

In addition, in the past 60 years the U.S. has never had a recession without a preceding spike in initial jobless claims – and, far from seeing such a spike, the labor market is extremely tight.

The U.S. unemployment rate is 3.6%, the lowest level since the start of the pandemic and only 0.1% above the 50-year low reached just before the pandemic in February 2020... 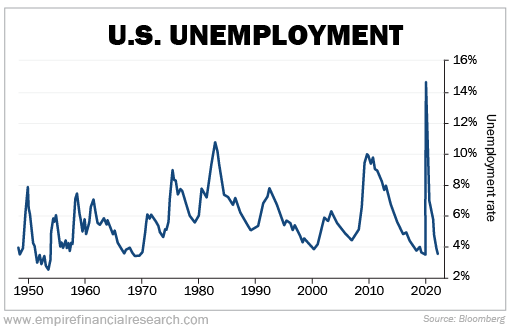 Meanwhile, the job vacancy rate is at an all-time high... 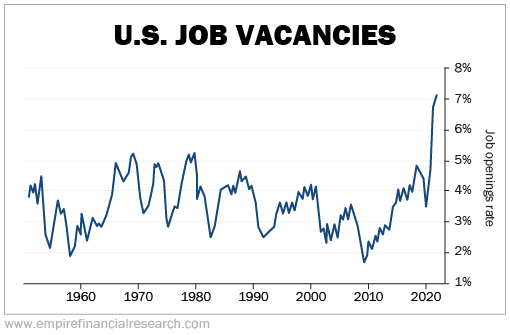 Additionally, the U.S. has almost fully recovered the jobs lost in the early months of the pandemic... 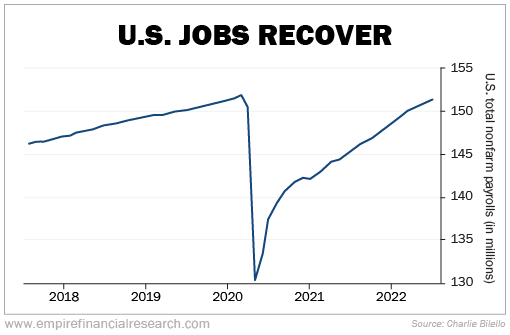 So I'll let economists argue about whether or not we're in a recession.

2) To me, what really matters for the stock market is a combination of consumer spending, corporate earnings, inflation, interest rates, and valuations – and in these areas, the story is solid.

Consumers' balance sheets remain strong and underleveraged, with the ratio of liabilities to net wealth at the lowest level in 50 years (hat tip to my friend Doug Kass for this chart)... 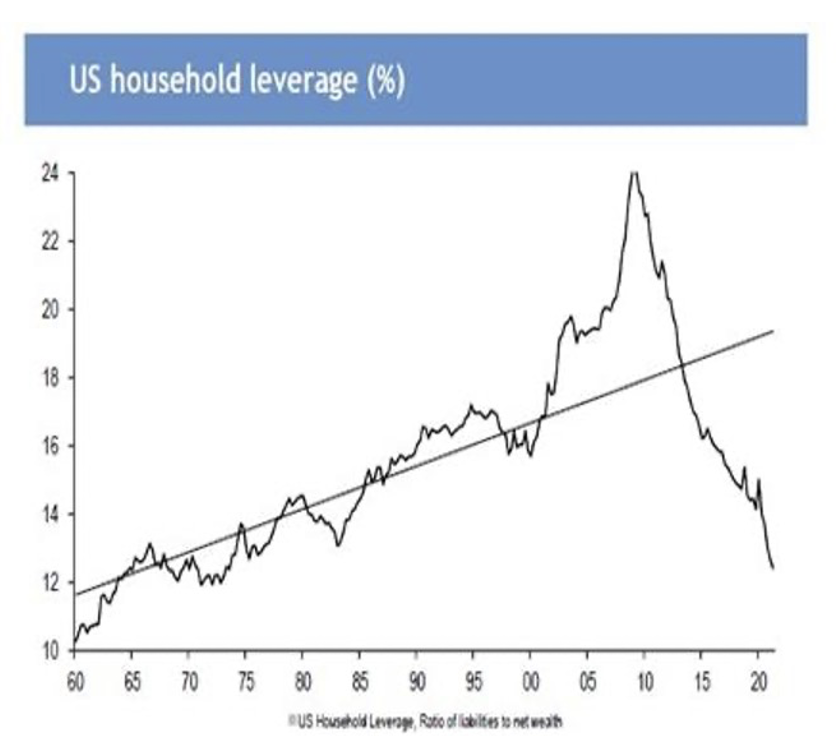 As for corporate earnings, a recent FactSet report breaks it down like this...

As for inflation, some important components are moderating...

The prices of most commodities have fallen considerably recently. Copper is down nearly 30% from its all-time high in March, corn, wheat, and soybeans are all down over 25% from their highs and below the levels they were at before Russia invaded Ukraine, used car prices are down 7% over the last six months, and the price of energy products – most important, oil, natural gas, and the price at the pump – have also fallen sharply.

Along these lines, here's a tweet by CNBC's Carl Quintanilla: 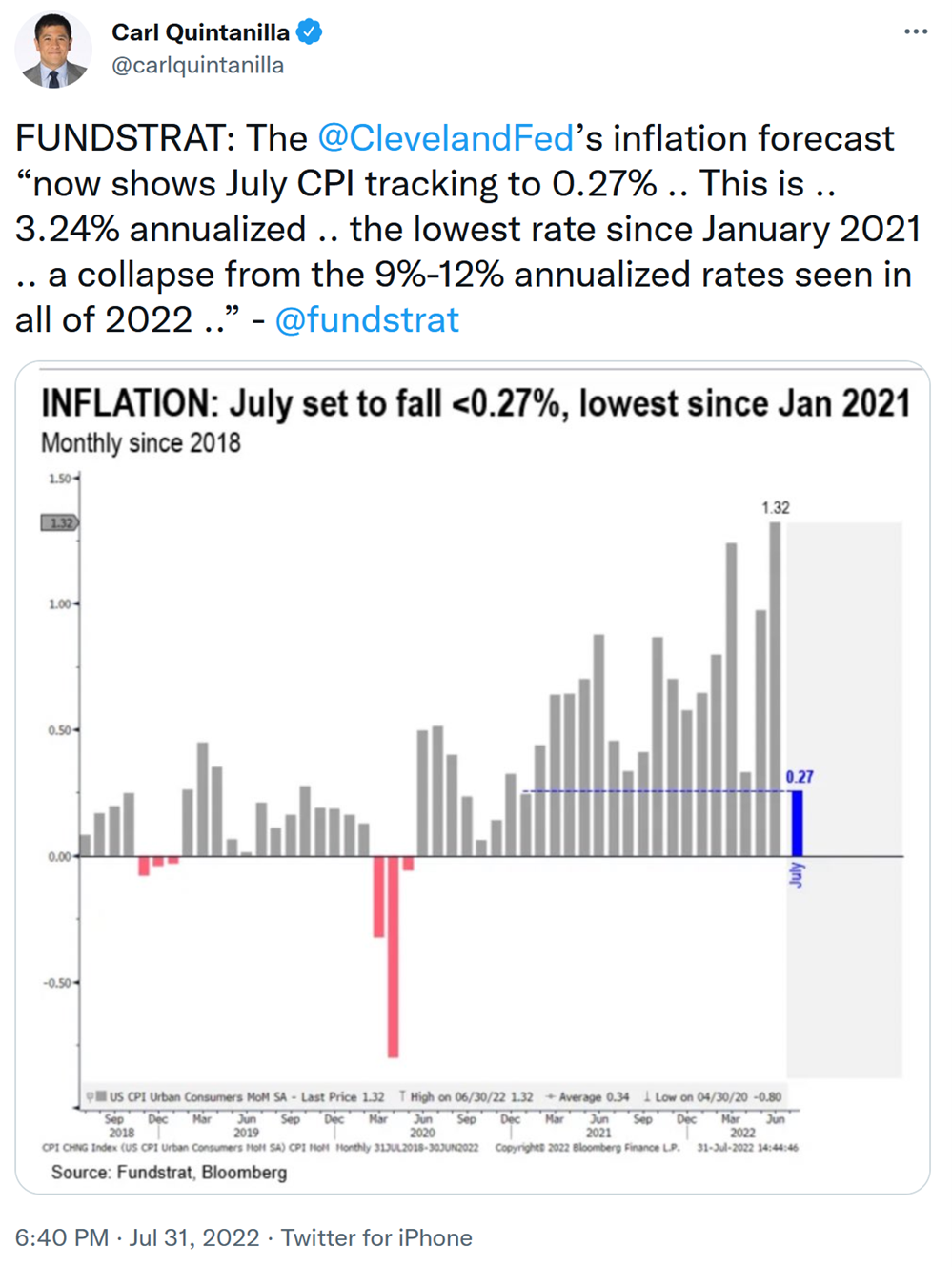 Turning to interest rates, after spiking earlier this year, they've pulled back significantly. For example, the yield on the benchmark 10-year U.S. Treasury has fallen from 3.48% to 2.55% in just the past six weeks – a four-month low. The 30-year fixed-rate mortgage average has followed suit, declining from 5.8% to 5.3%.

Lastly, across the entire market, valuations are modest. According to FactSet...

Furthermore, the recent FactSet report includes a chart showing that the decline in the market this year has returned stocks to the long-term EPS trend line, which is a bullish indicator... 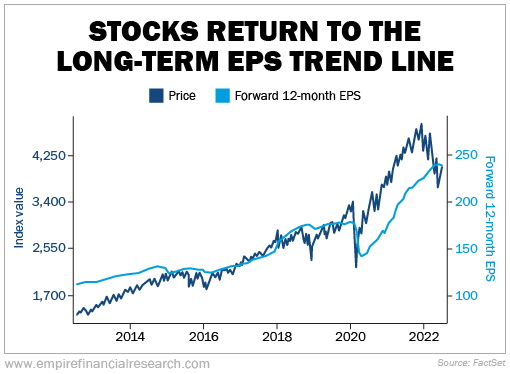 In summary, while I'm not pounding the table, I'm moderately bullish for at least the rest of this year.

Yes, the economy is slowing, but to the extent there is a recession, I expect it to be mild and short, which is already reflected in lower stock prices pretty much across the board this year. And there are many offsetting positive trends, which should result in decent – perhaps even better than decent – returns from here.

In our flagship Empire Stock Investor newsletter, we've been finding individual stock bargains in the midst of this environment. In the next monthly issue – coming out tomorrow after the market close – we've found another one.

If you aren't already a subscriber, click here to find out how to gain risk-free access to this brand-new issue when it publishes tomorrow.

3) Susan and I recently binge watched and really enjoyed the four episodes of a new documentary on Netflix, Keep Sweet: Pray and Obey.

The show exposes the polygamous Fundamentalist Church of Jesus Christ of Latter-Day Saints, an offshoot of mainstream Mormonism, and its creepy, sicko leader Warren S. Jeffs, who has as many as 87 wives, two dozen of whom were underage when he married them.

Yes, this happened in America, right under our noses, for decades... 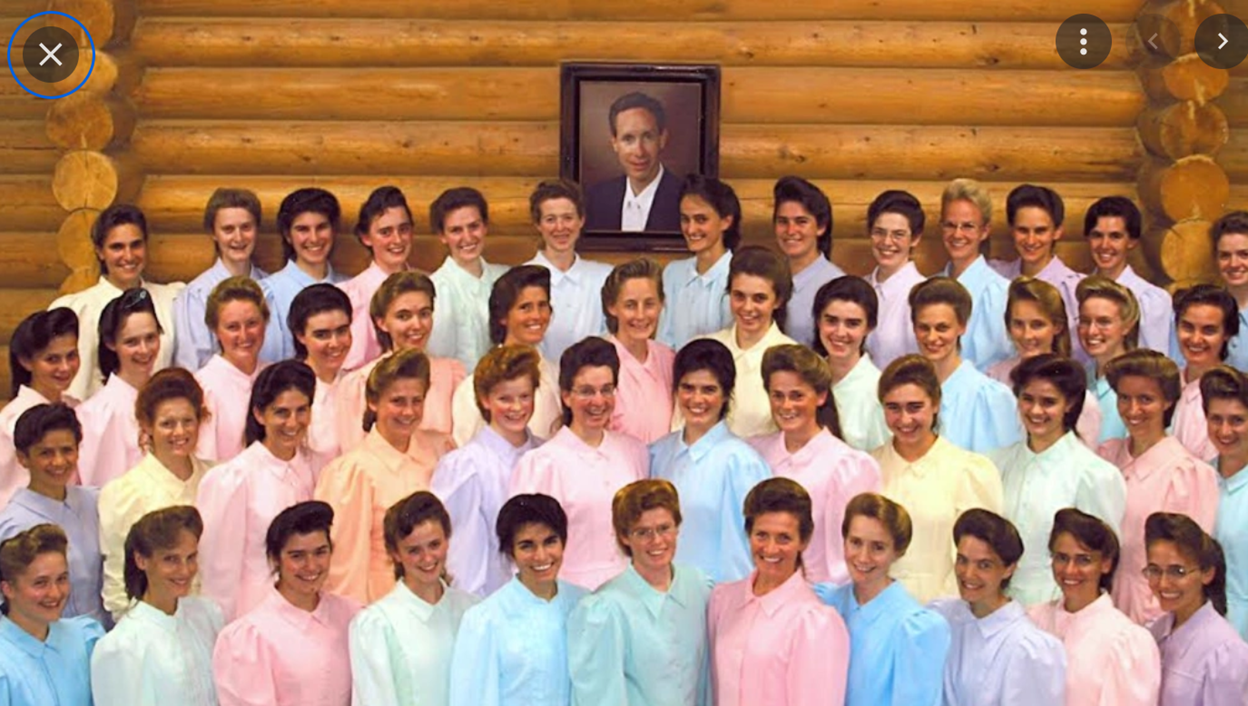