Are we in a bubble? A look at market and economic fundamentals

1) In yesterday's e-mail, I wrote about how I use my "spidey sense" to identify bubbles that are about to burst. But I want to emphasize that I start with the fundamentals, so let's take a look at them...

Mark Spiegel of hedge fund Stanphyl Capital believes that there's a bubble in growth/tech stocks. In his recent investor letter, he explains why his fund is down this year...

So our short positions have obliterated the profits from our long positions, and yet when this bubble pops we'll be glad we have them.

The dichotomy between our longs and our shorts is well illustrated in this chart showing a record divergence between the performance of "growth stocks" vs. "value stocks," yet I believe that as has always happened in the past, this will mean-revert in our favor: 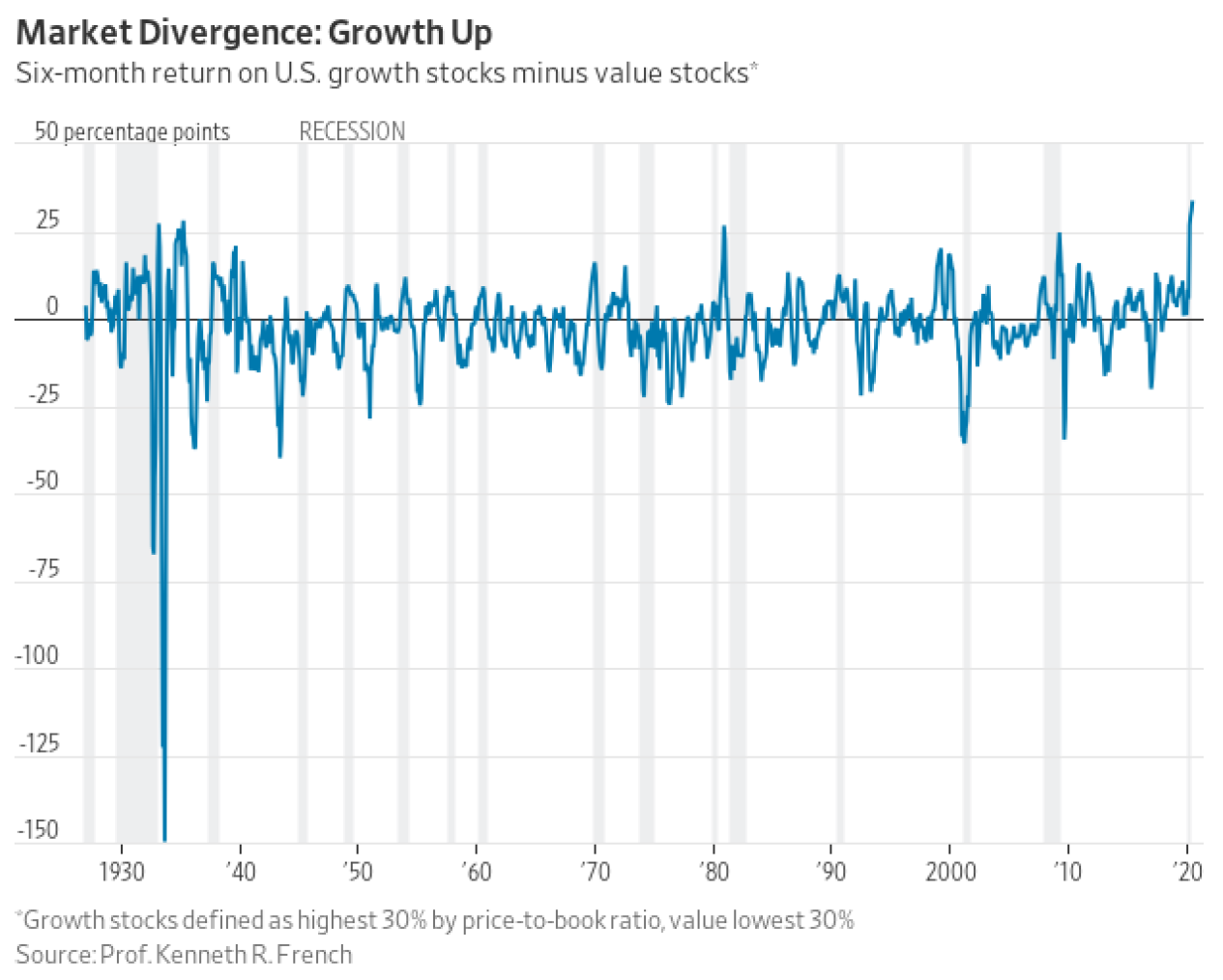 I have a "near-term reason" and a "long-term reason." Near-term, bullish speculation is (literally) off the charts: for the last two weeks the Put-Call ratio for Nasdaq 100 constituent stocks closed at the extremely low (i.e., "complacent") level of 0.42 and intra-day today it hit 0.21, which may be the lowest level ever. Meanwhile, @SentimenTrader points out that call option buying as a percentage of NYSE volume far exceeds that of the 2000 bubble era... 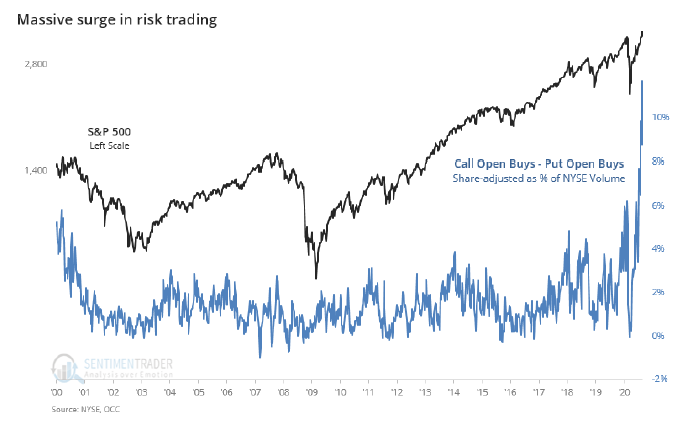 ... while @hmeisler shows us that Citi's Panic/Euphoria index is well into "Euphoria" mode – by far the highest it's been since the bubble peak in 2000 (when it hit approximately 1.5): 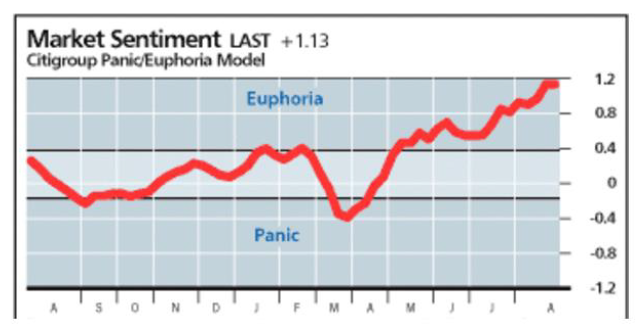 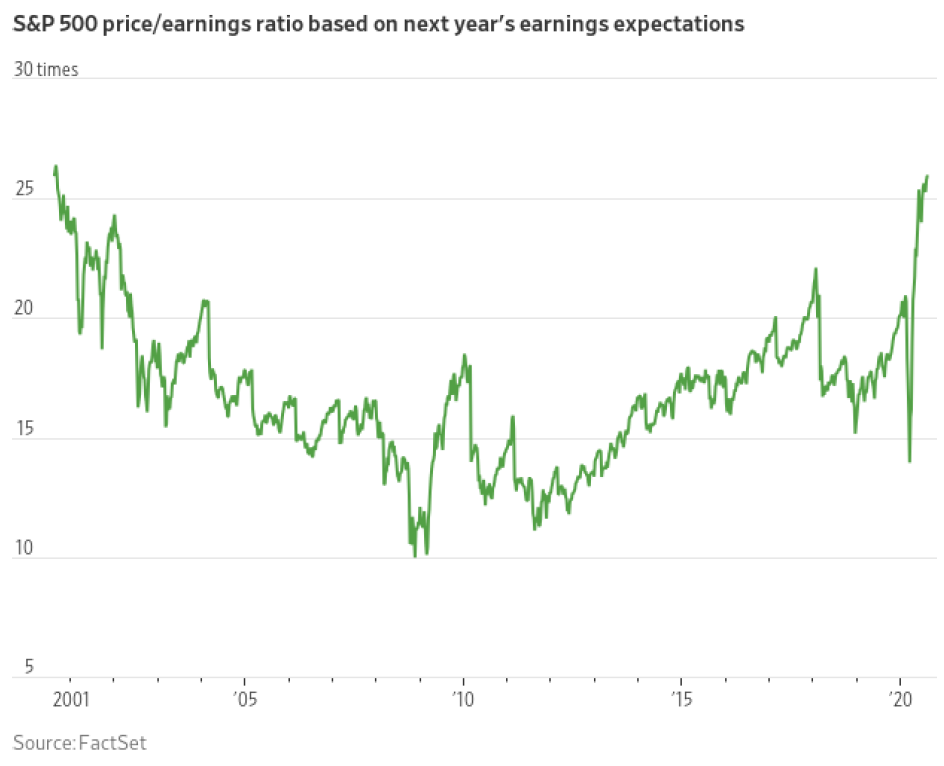 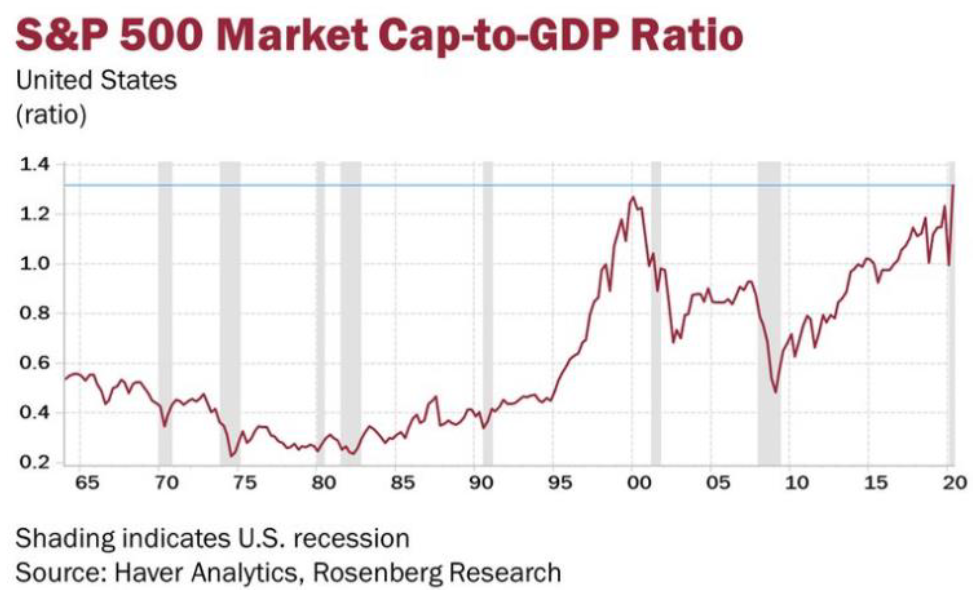 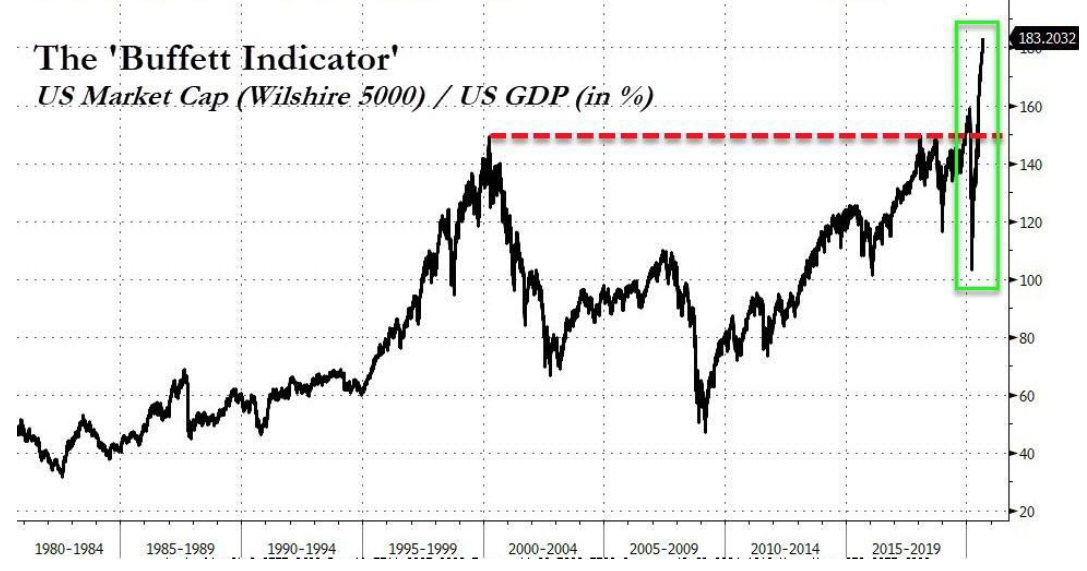 And from @ISABELNET_SA we can see that available buying credit (cash) in customer accounts as a percentage of S&P 500 market cap is down near the level it was at the peak of the 2000 bubble... 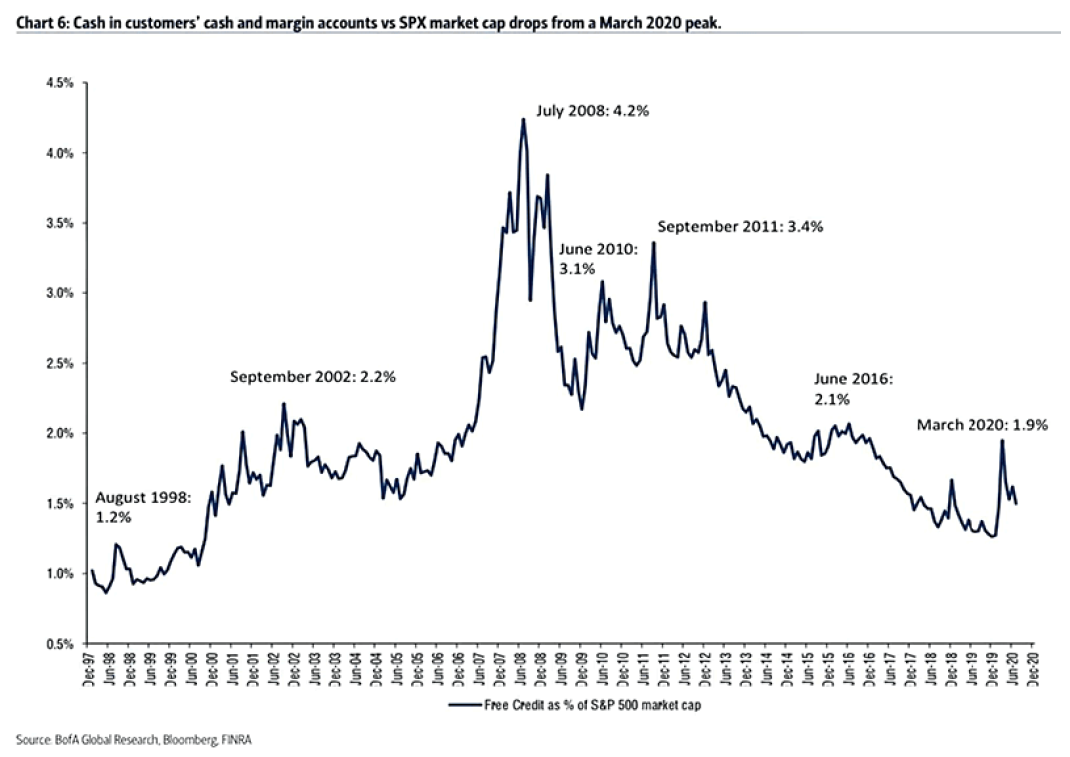 ... while as @Fxhedgers points out, there are almost no shorts left: 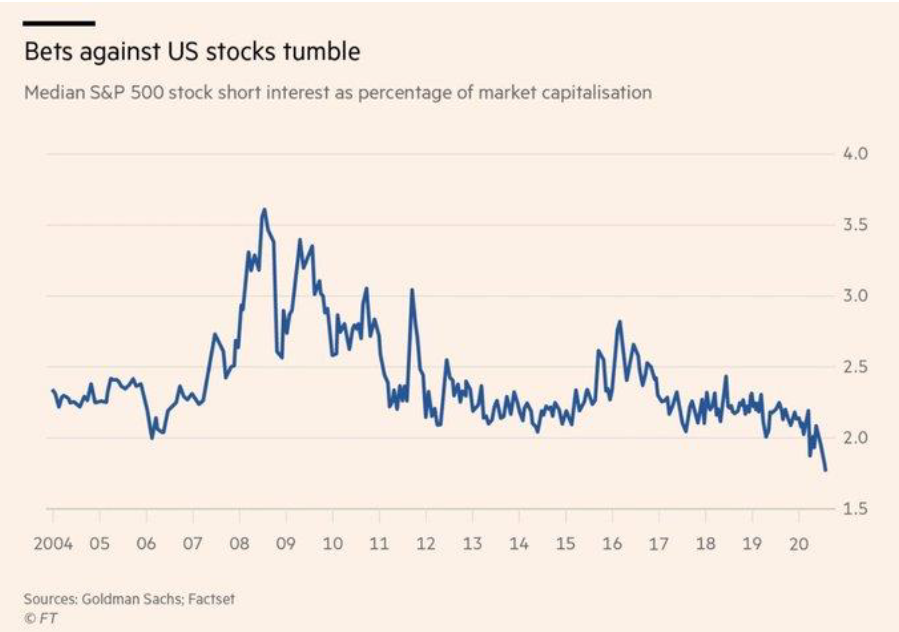 So "excessive bullishness & complacency" is the near-term reason why I maintain our QQQ short position. Medium-to-longer-term I believe the Federal Reserve's endless money-printing combined with massively profligate deficit spending from both parties in Washington and growth-retarding levels of debt will return us to an environment similar to the stagflationary 1970s; i.e., slow growth and high inflation (which we got a hint of this month). In that environment, high-flying stocks (such as the QQQ we're short) will suffer massive PE multiple compression, and gold (which we're long) will climb steadily.

2) These charts from Bloomberg show that investors are very bullish, which is usually a good contra-indicator:

3) Turning from market fundamentals to what's happening with our economy, the data points are mixed. Things are clearly getting better, but we seem to be in a bit of an air pocket right now.

Here's an overview from Oxford Economics, which estimates that the U.S. is operating at slightly below 80% of its normal level, little improved over the past two months: 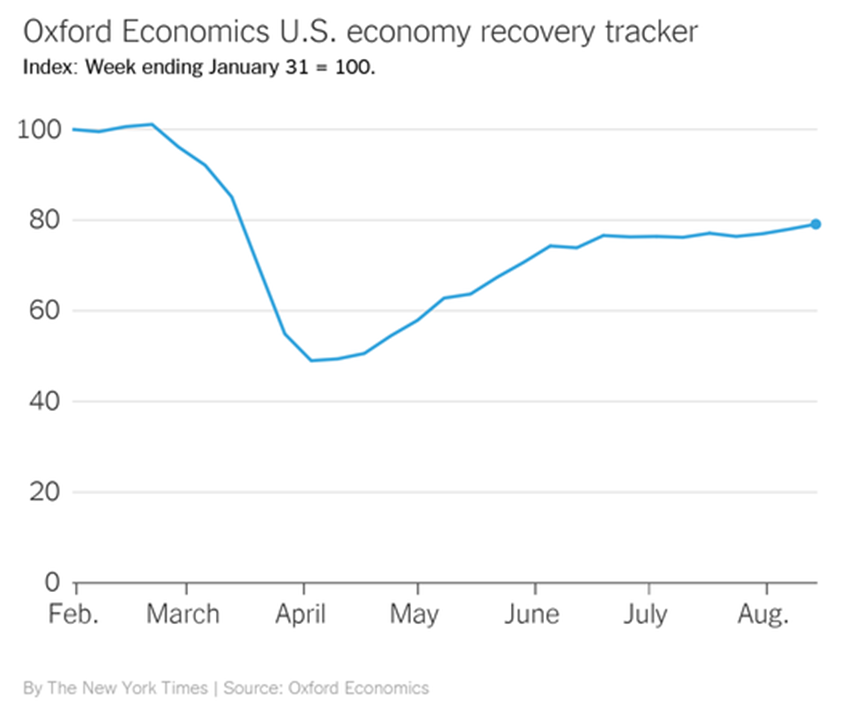 Recent data through August from private firms suggest consumer spending overall appears to have made up much of the ground lost during the worst of the pandemic, though the recovery is uneven across the country and might have flattened out...

While new coronavirus infections in the U.S. appear to now be declining from the highs recorded in July, recent measures of consumer sentiment are mixed, suggesting households are hesitant about their economic prospects...

The Conference Board, a private research group, on Tuesday said its consumer-confidence index dropped sharply in August to 84.8 from 91.7 in July. It also warned that households' increasing concerns about the economic outlook and their financial well-being will likely cause spending to cool in the months ahead.

Hiring increased in July for the third consecutive month, with employers adding 1.8 million jobs, although the improvement appears to be halting. Initial jobless claims declined by 98,000 to 1 million in the week ended Aug. 22, the Labor Department said Thursday, signaling layoffs continue as the coronavirus hampers a smooth economic recovery. 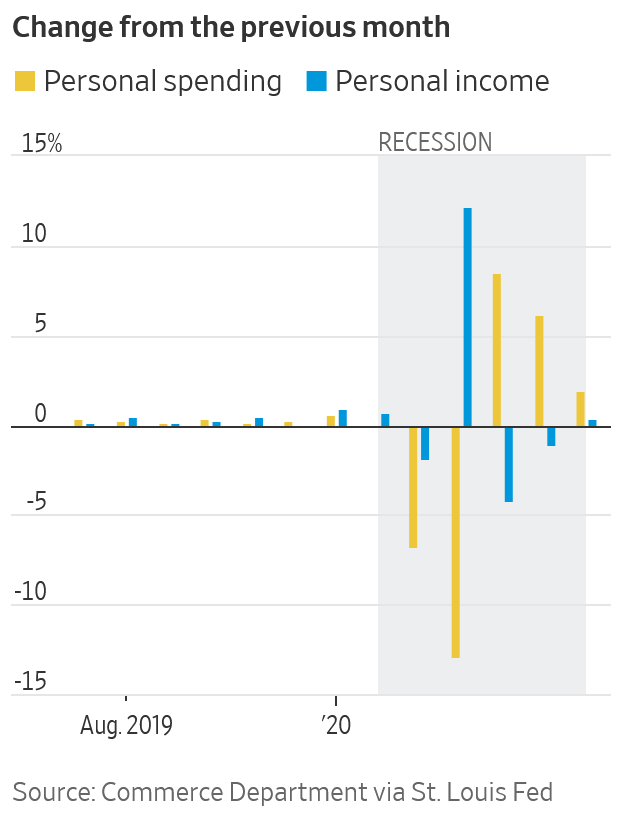 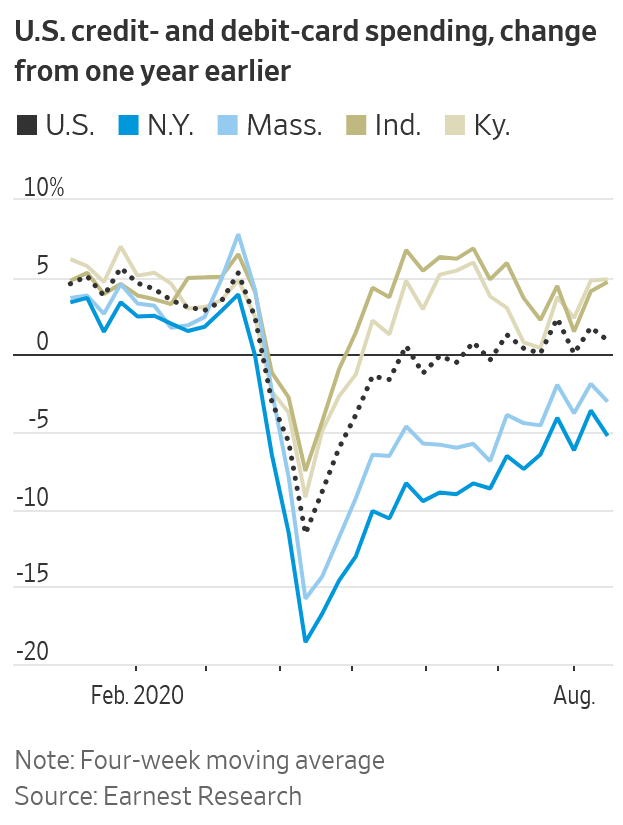 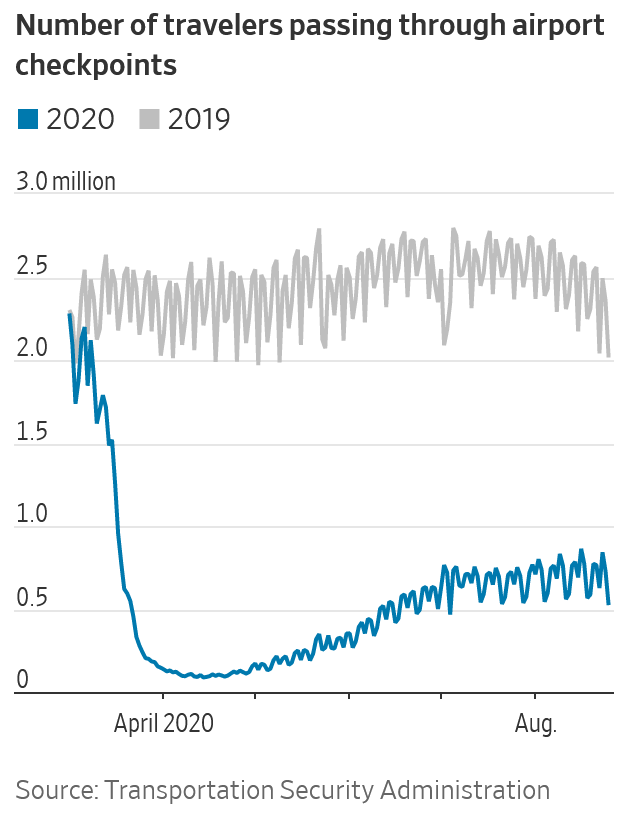 Just over one million Americans filed new claims for state jobless benefits last week, the latest sign that the economy is losing momentum just as federal aid to the unemployed has been pulled away.

Weekly claims briefly dipped below the one million mark early this month, offering a glimmer of hope in an otherwise gloomy job market. But filings jumped to 1.1 million the next week, and stayed above one million last week, the Labor Department said Thursday.

"It's devastating how stubbornly high initial claims are," said Julia Pollak, a labor economist at the employment site ZipRecruiter. "There are still huge numbers of layoffs taking place." 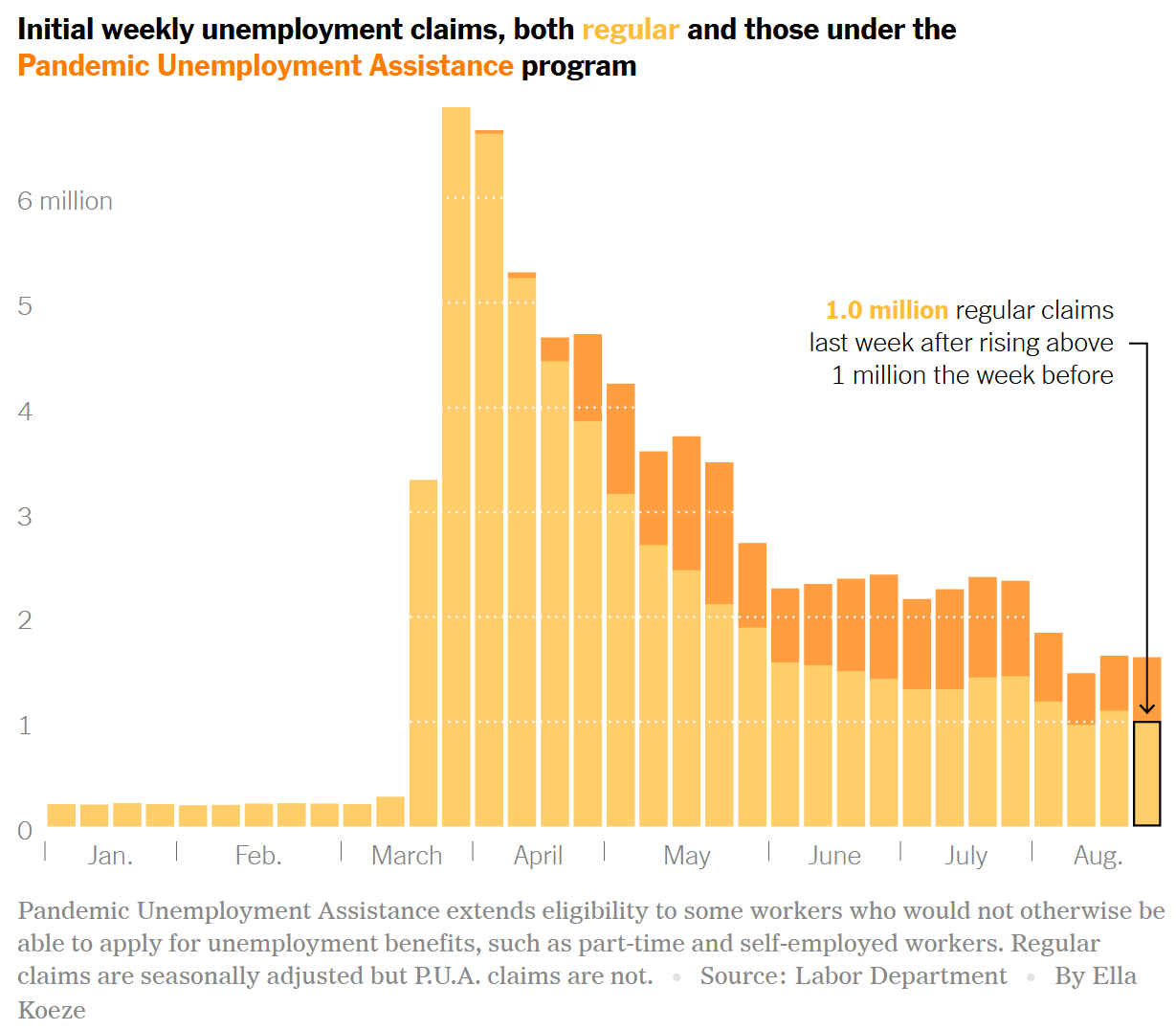 Other recent indicators also suggest that the recovery is faltering. Job growth slowed in July, and real-time data from private-sector sources suggests that hiring has slumped further in August.

6) Lastly, here’s another NYT article about how small businesses are hurting: Small-Business Failures Loom as Federal Aid Dries Up. Excerpt:

The United States faces a wave of small-business failures this fall if the federal government does not provide a new round of financial assistance — a prospect that economists warn would prolong the recession, slow the recovery and perhaps enduringly reshape the American business landscape.

As the pandemic drags on, it is threatening even well-established businesses that were financially healthy before the crisis. If they shut down or are severely weakened, it could accelerate corporate consolidation and the dominance of the biggest companies.

Tens of thousands of restaurants, bars, retailers and other small businesses have already closed. But many more have survived, buoyed in part by billions of dollars in government assistance to both businesses and their customers.

The Paycheck Protection Program provided hundreds of billions in loans and grants to help businesses retain employees and meet other obligations. Billions more went to the unemployed, in a $600 weekly supplement to state jobless benefits, and to many households, through a $1,200 tax rebate — money available to spend at local stores and restaurants.

Now that aid is largely gone, even as the economic recovery that took hold in the spring is losing momentum.