Are This Activist's Eyes Bigger Than His Stomach? And Is Private Equity Taking Things Too Far?

The day it went public in 2013, Potbelly (PBPB) might have had the best single-day jump of any restaurant chain...

It has been downhill ever since for the sandwich chain, as the company once hailed as "the next Chipotle" started looking more like a burrito without any filling.

After going public at $14 per share and doubling within just a few hours, the stock plunged within months... and then tumbled more – hitting rock bottom of around $2 per share in 2020, before recovering to around $5 per share recently after an investor bought a stake. 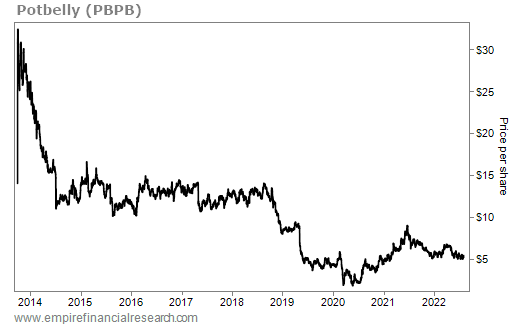 It's not just that the activist bought the stake, but it's what he said in the regulatory filing... all of which I'm sure was genuine and well intentioned, but also seemingly was steeped in fantasy – that this could become a company with 2,000 units, of which 1,700 would be franchised.

For perspective, this is a company that as of last quarter had 444 units, with 46 of those units franchised.

As it turns out, those numbers cited by the activist weren't entirely pulled out of the ether...

They were stoked by management, which earlier this year – out of the blue – set a long-term target of more than 2,000 units. As part of that plan, management intends to refranchise 25% of the company's franchises within three years, which will include commitments to add additional units.

For a reality check, courtesy of my friend John Gordon, the restaurant consultant – he says that the activist taking a 10% stake "is great," but...

They are already falling into the "Hockey Stick Mentality" by postulating... "If we had 1,700 franchisee units..."

Existing world franchisees, with management overhead and access to capital, are routinely pitched dozens of new franchise concepts each year. They are not going to a concept where the store-level margins are subpar. Remember, they want a better situation than what they have currently or have just lived through.

And as Jonathan Maze of Restaurant Business adds...

[Potbelly is] dwarfed by much larger competitors, including the giant Subway, the Inspire Brands-led Jimmy John's, the Restaurant Brands International (QSR)-led Firehouse Subs, and Jersey Mike's. That makes the market that much more difficult for a company like Potbelly to meet the apparently lofty expectations of its activist investor.

There's one more thing: In its filing, the activist reckons...

If the Company were to use future free cash flow to freeze its share count at 29M, the Reporting Persons could envision [earnings per share] EPS climbing to over $2 in 10 years. With profitable, growing franchisors valued at 20x earnings and 3x revenues, the Reporting Persons could see the Company's share price rise to about $40 to $60 in 10 years, the midpoint being 10x where it is today.

Given that PBPB shares are currently trading around $5, that would be one heck of a multibagger. But 10 years? Really? Sounds great on paper, but in a world where the news cycle doesn't last 10 minutes... that's quite a stretch.

Moving on... is there nothing left for private equity to buy?

My friend David, who has a great eye for the absurd, noted this on LinkedIn the other day...

Over the years, some of the worst companies I have come across were private equity-backed health care services providers. You can easily search for the abuses in emergency rooms, nursing facilities, and mental health care to get a taste of where asset stripping, cost cutting, and profiteering meet health care.

He pointed to this story in Kaiser Health News, via Fortune, about how private equity is now rolling up the rapidly growing hospice industry. According to that story...

That rapid growth has many hospice veterans worried that the original hospice vision may be fading, as those capital investment companies' demand for return on investment and the debt load they force hospices to bear are hurting patients and their families.

The story added that "with limited oversight and generous payment, the industry is at high risk for exploitation," and that "for-profit hospices tend to hire fewer employees than nonprofits and expect them to see more patients."

It takes a really special sort of investor to figure [out] profit/generate returns from hospice care. It feels more exploitative given the vulnerabilities of families facing [the] end of life. But given the financial abuses and rent seeking that riddle our health care system, it is sadly unsurprising.

This is also a sign of too much capital sloshing around our financial system that some pensions, endowments, and family offices among others evaluate that funding these firms is a good allocation.

It's one step short of being paid a commission on the sale of a casket at the time of death at some of the corporate-owned funeral homes... a story, I'm surprised, that never gets told.

I received plenty of feedback related to my recent essay on the normalizing of new housing sales and my comment on Opendoor (OPEN)...

"I'm not trying to throw gasoline on this fire, but I didn't notice any mention of the FTC false claims lawsuit against Opendoor – seems this would have some impact on their credibility. Another factor in their downward spiral in market cap? Best regards." – Dick B.

Herb comment: Dick, I admit I hadn't seen the news before I published. The model clearly has challenges and, as I pointed out in my writeup, a sharp decline in housing would seriously test the model.

"Outfits like Opendoor have placed a lot of upward pressure on resale home prices. I was recently looking for homes in Tucson, once a hotbed of 'sane' real estate prices. I saw many of the properties that Opendoor had purchased at low prices. They then did very poor-quality but superficially good-looking renovations. Sometimes they only painted the place: you could see the pictures from the previous sale.

"They pushed the prices up hundreds of thousands of dollars. I would never buy a house that they flip, because I would want to rip out everything they did and start over. I once held the stock, but once I saw their shoddy work I dumped it quickly. Thanks." – Heather T.

Herb comment: Of course, Heather, you could say that about flips in general. But flips by public companies where margins are on the line take it to another level.

"Just sold a house to Opendoor. Never talked to anyone. All e-mail, text. Easier than any deal I've done. Not sure how they can pay 110%. But that's good for me." – Greg W.

Herb comment: Greg, here's the way I look at it... as long as the check clears, take the money and run.