Are hospitals really running out of beds for COVID-19 patients?; Why Is All COVID-19 News Bad News?

I continue to closely follow the pandemic, sending lengthy e-mails to my coronavirus e-mail list roughly once a week. If you'd like to receive them, simply send a blank e-mail to: [email protected].

1) We're experiencing a severe third wave of the pandemic, with all of the indicators moving in the wrong direction. Yesterday we hit all-time highs for new cases (195,695) and the number of Americans hospitalized (100,226) and, with 2,733 deaths, almost surpassed the prior worst day of 2,769 on May 7, as you can see in these charts (source): 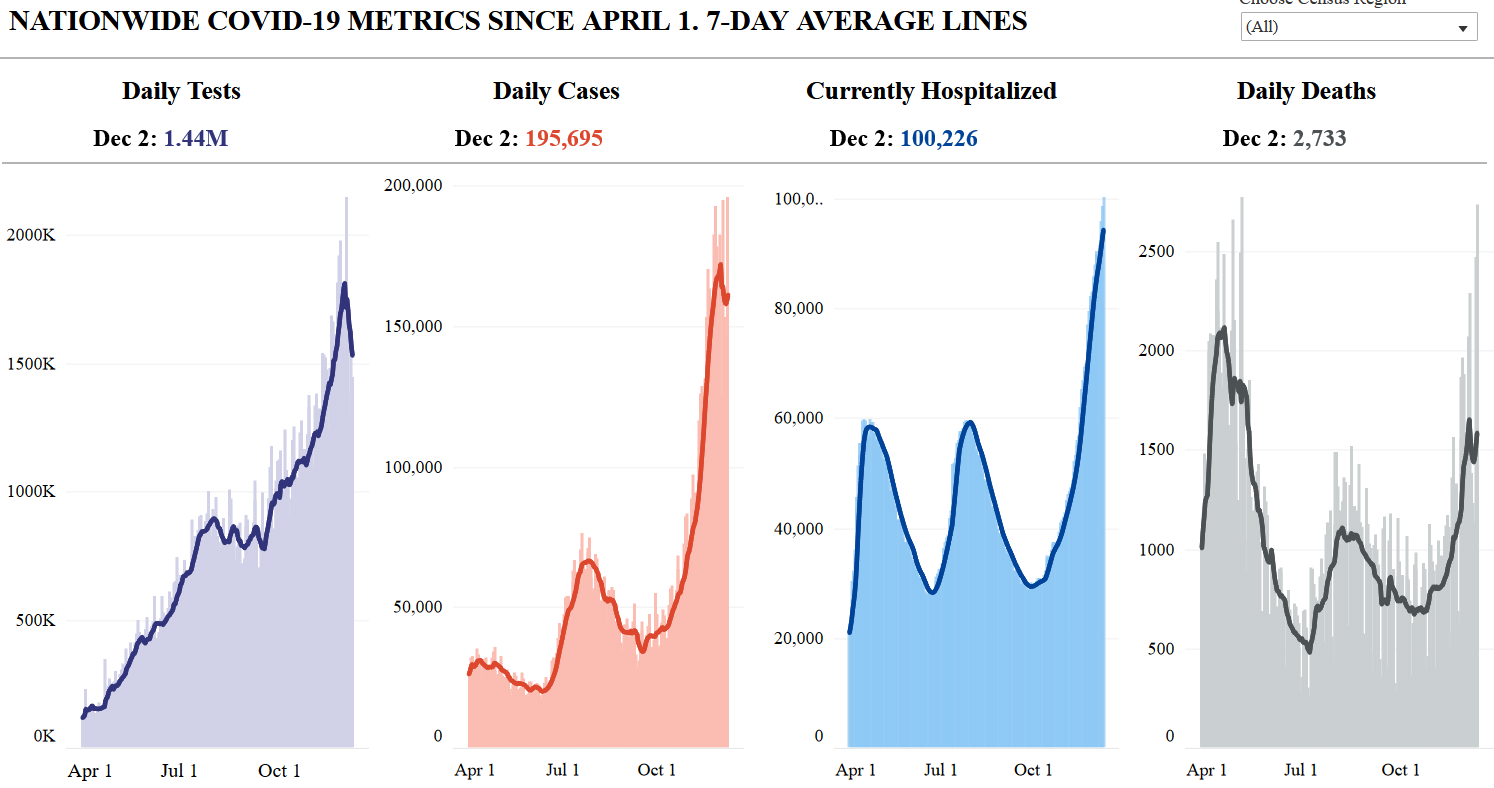 Such grim numbers (and the accompanying headlines – discussed below) contain two silver linings, however, that give me cause for cautious optimism.

As cases, hospitalizations, and deaths declined in the late summer and fall, Americans got complacent. It would be hard to find a better (and funnier) example than hundreds of people last month attending Naughty N'Awlins, an adults-only swingers' party in New Orleans (here's a Rolling Stone article about it, and here's comedian Stephen Colbert's riff on it). Is anyone the least bit surprised that this turned into a superspreader event, with 41 attendees testing positive in the aftermath?

I think such foolishness is less likely today…

Secondly, every day population-level resistance is rising, bringing more areas closer to the herd immunity threshold, at which point the virus stops spreading so rapidly.

It was only a month ago that Europe's numbers were even worse than ours – and look at what's happened since then (source)... Here's the seven-day rolling average of new COVID-19 confirmed cases in the European Union (plus the U.K.): 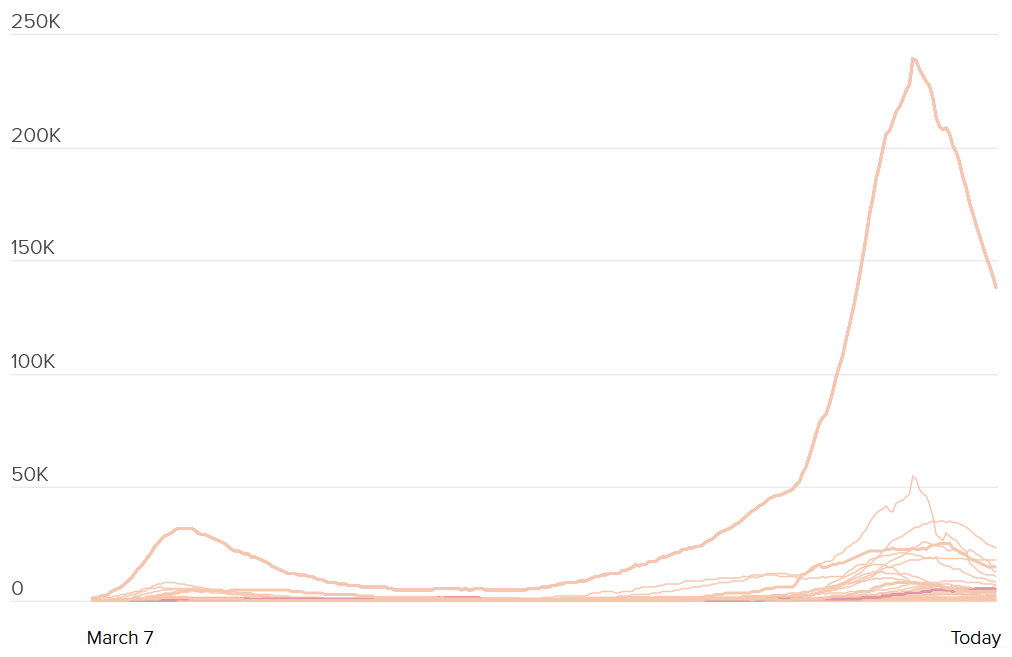 In conclusion, I think we're close to the peak in terms of cases, with hospitalizations peaking soon thereafter, followed by deaths beginning to decline a few weeks after that.

Then, with widespread vaccinations starting within days, I'm cautiously optimistic that things will become much more normal by next summer.

2) For more on the pandemic, below is an excerpt from the e-mail I sent to my readers yesterday afternoon (you can read the entire e-mail here)...

While the pandemic is indeed very serious, some of the reporting on it has been over the top, with lots of hysteria and few facts...

For example, when I saw the headline of this article on the front page of the New York Times on Saturday, COVID Overload: U.S. Hospitals Are Running Out of Beds for Patients, I expected to read statistics about hospital utilization and capacity – nationally, regionally, by state, and/or by city.

But there wasn't a single piece of data on this in the entire lengthy article... just a lot of anecdotes and scary quotes like this (keep in mind that the plural of anecdote is not data):

In excruciating pain with lesions on her face and scalp, Tracey Fine lay for 13 hours on a gurney in an emergency room hallway.

All around her, COVID-19 patients filled the beds of the hospital in Madison, Wis. Her nurse was so harried that she could not remember Ms. Fine's condition, and the staff was slow to bring her pain medicine or food...

From New Mexico to Minnesota to Florida, hospitals are teeming with record numbers of COVID patients. Staff members at smaller hospitals have had to beg larger medical centers repeatedly to take one more, just one more patient, but many of the bigger hospitals have sharply limited the transfers they will accept, their own halls and wards overflowing.

In the spring, the pandemic was concentrated mainly in hard-hit regions like New York, which offered lessons to hospitals in other states anticipating the spread of the coronavirus. Despite months of planning, though, many of the nation's hospital systems are now slammed with a staggering swell of patients, no available beds and widening shortages of nurses and doctors. On any single day, some hospitals have had to turn away transfer requests for patients needing urgent care or incoming emergencies.

And rising infection rates among nurses and other frontline workers have doubled the patient load on those left standing.

There is no end in sight for the nation's hospitals as the pandemic continues to hammer cities and rural areas across the country, totaling 13 million cases so far this year. And public health experts warn that the holidays may speed the already fast-moving pace of infection, driving the demand for hospital beds and medical care ever higher.

A record number of Americans – 90,000 – are now hospitalized with COVID, and new cases of infection had been climbing to nearly 200,000 daily.

Health care systems "are verging on the edge of breaking," Dr. Michael Osterholm, a member of President-elect Joseph R. Biden Jr.'s COVID-19 advisory council, said in a podcast this month.

The public does not realize how dire the situation is, Dr. Osterholm said, and may respond only "when people are dying, sitting in chairs in waiting rooms in emergency rooms for 10 hours to get a bed, and they can't find one, and then they die."

When Ms. Fine went to UW Health's University Hospital in Madison, she found doctors there overwhelmed and distracted. "They just parked me in a hallway because there was no place for me to go," said Ms. Fine, 61, who was eventually found to have a severe bout of shingles that threatened her eyes.

To figure out the real story, I pulled the data (see below), which show a much less alarming picture. In short, while I don't doubt that some of our nation's 6,146 hospitals are overwhelmed, the number is likely very small. This is what one hospital executive "whose chain has facilities in one of the Midwest surge states" e-mailed to journalist Alex Berenson:

We've had a "surge," going from around five to six patients about a month ago to 25-30 patients today (so to borrow from the media, we've had a 500% increase!!). More importantly, we feel even better than ever that we can handle any of these little mini surges, just like we do every winter. People need to remember that we are used to being 100% full in our ICUs and ERs this time of year, so this feels pretty normal.

Anecdotally, ever ER dos have also mentioned that this feels like a completely different virus than back in March/April/May. Whether that's mutations, better treatment, less sick people getting, or a combo of all three, it just feels very similar to our normal winter season.

Such calming words, however, don't sell papers. Remember the old saying in the media business: "If it bleeds, it leads."

Highly emotional, negative coverage is, unfortunately, par for the course based on what my friend Bruce Sacerdote, an economics professor at Dartmouth, and his colleagues found in a paper they just published, Why Is All COVID-19 News Bad News? Here's the summary:

We analyze the tone of COVID-19 related English-language news articles written since January 1,2020. Ninety-one percent of stories by U.S. major media outlets are negative in tone versus 54% for non-U.S. major sources and 65% for scientific journals. The negativity of the U.S. major media is notable even in areas with positive scientific developments including school re-openings and vaccine trials.

This chart (source) shows the number of people with COVID hospitalized nationally since the beginning of the pandemic: 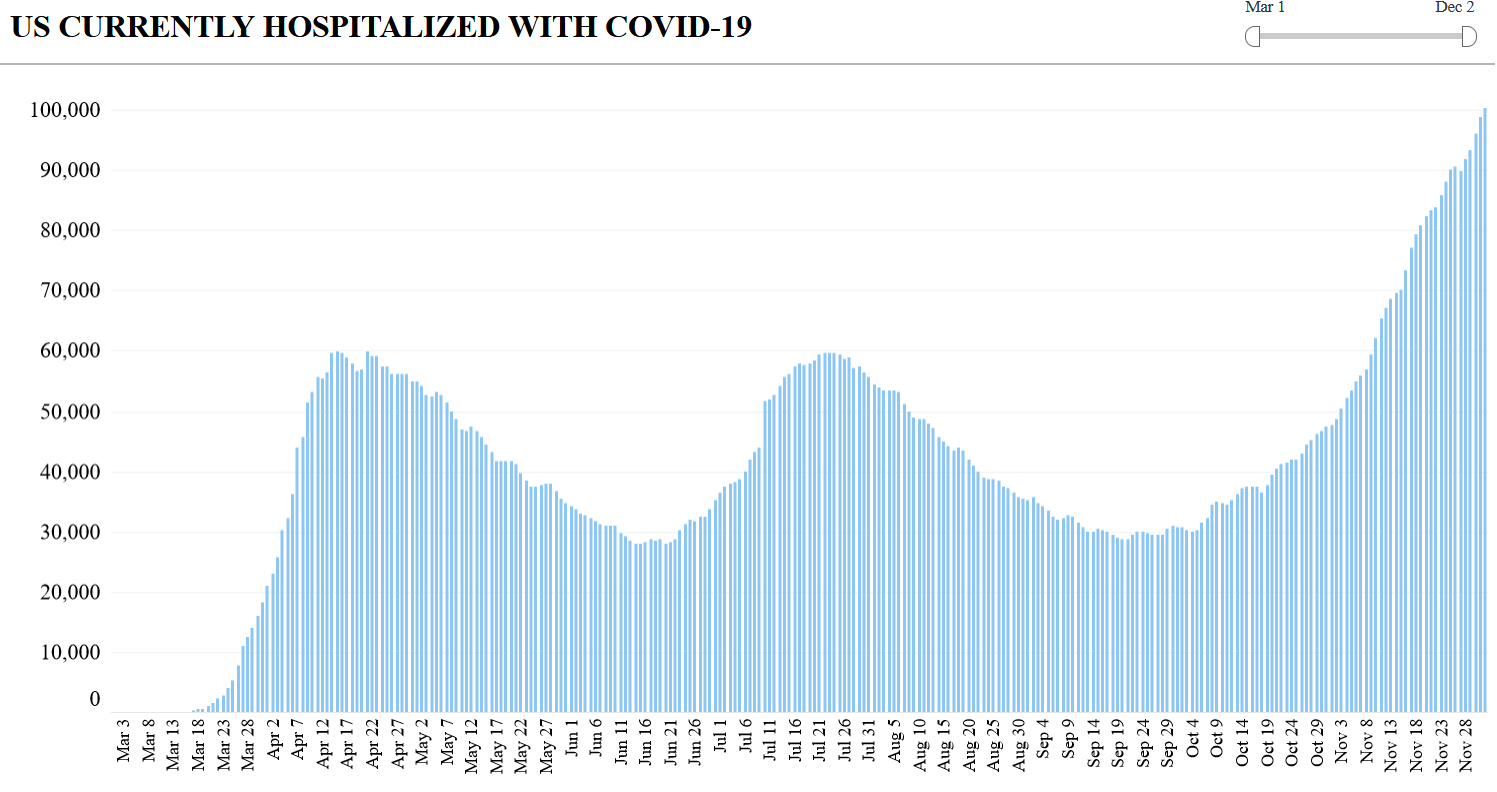 Of course, 100,000 is a big number – up 67% from the previous peaks in April and July. But is it a big number relative to the U.S. capacity? The New York Times article provided no context, so I turned to Google and learned that there are 924,107 staffed beds in all U.S. hospitals (source).

But that's not really a relevant number, so let's instead look at intensive care unit ("ICU") beds. At first glance, we might have a problem, as there are only 86,241 of them nationwide, according to the government's website, HeathData.gov.

However, interestingly, during the month of November, even as the number of people hospitalized with COVID (per the chart above) more than doubled from 47,402 to 96,039, the percentage of occupied ICU beds scarcely budged, as this chart I put together shows (source): 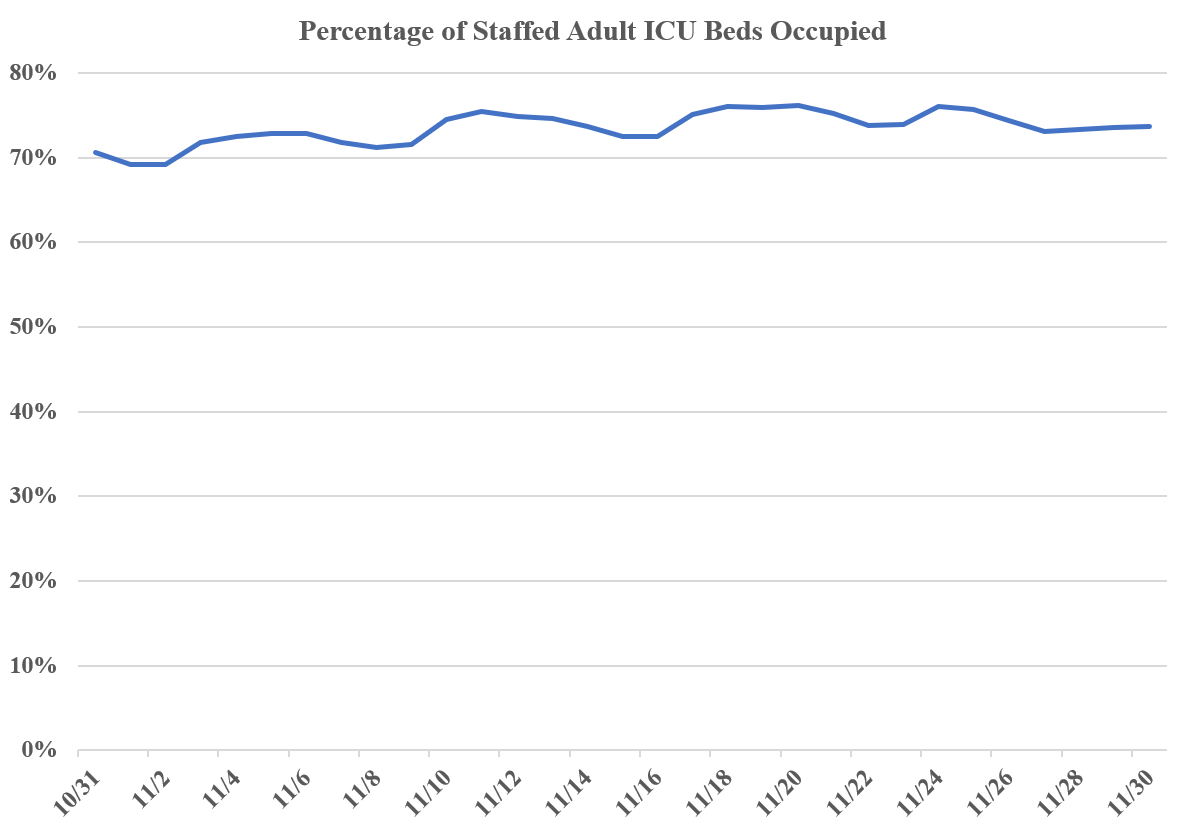 It's also important to understand that hospitalizations aren't spread evenly across the country. This chart (source) breaks it down by region: 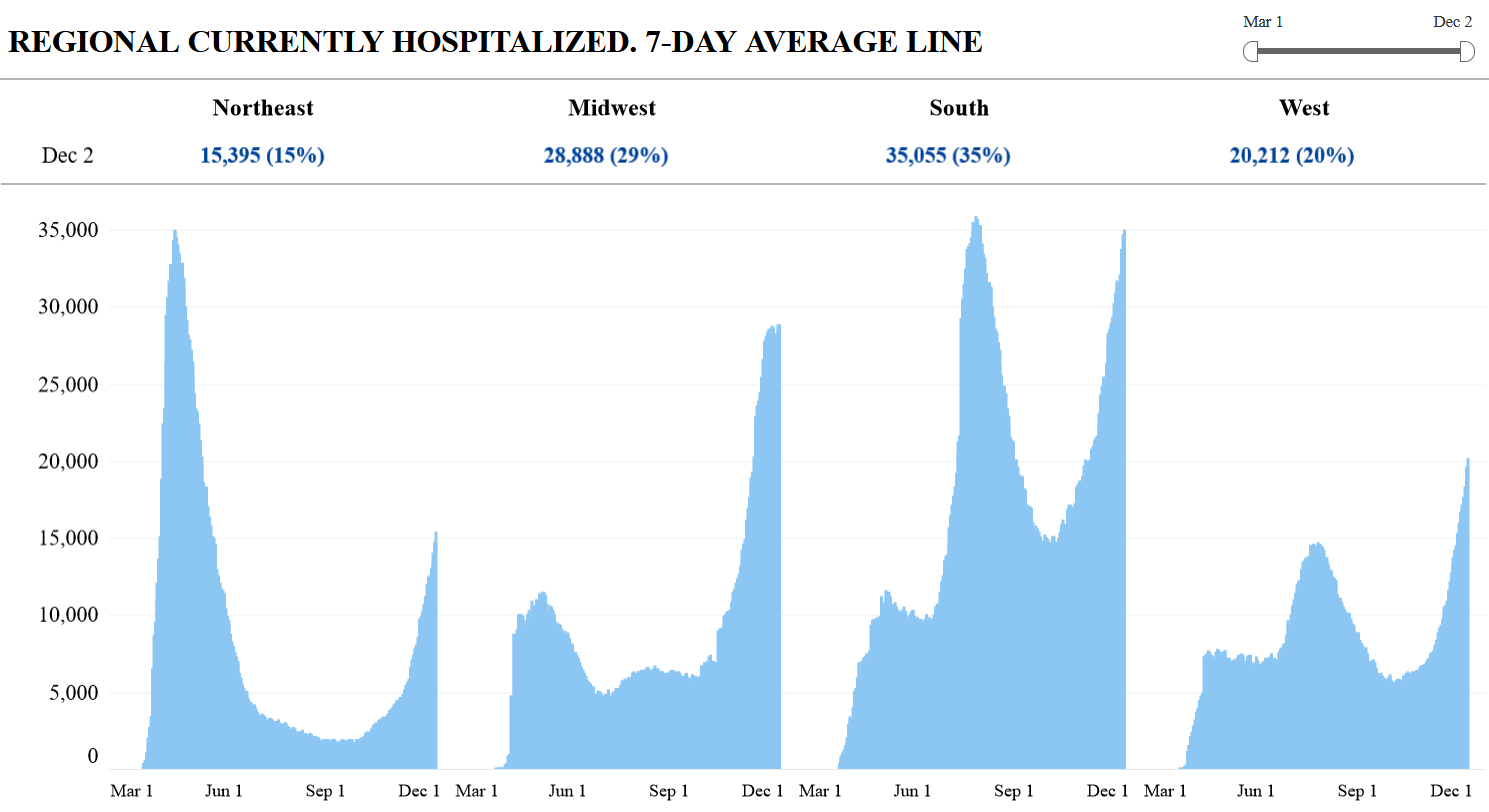 And these two charts (source, source) break it down by state, per capita (in the second one, I highlight the high and low states: South Dakota and Hawaii): 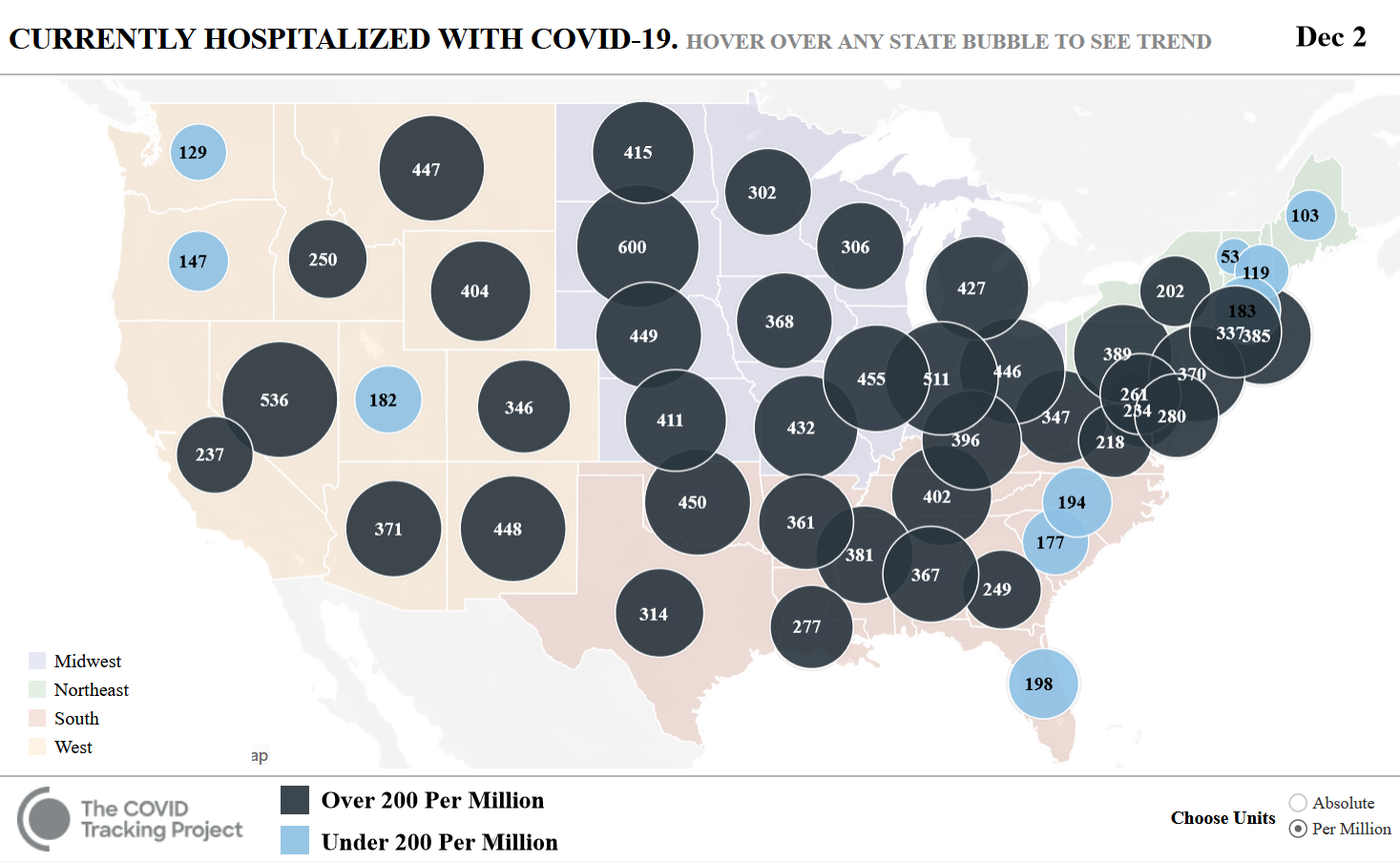 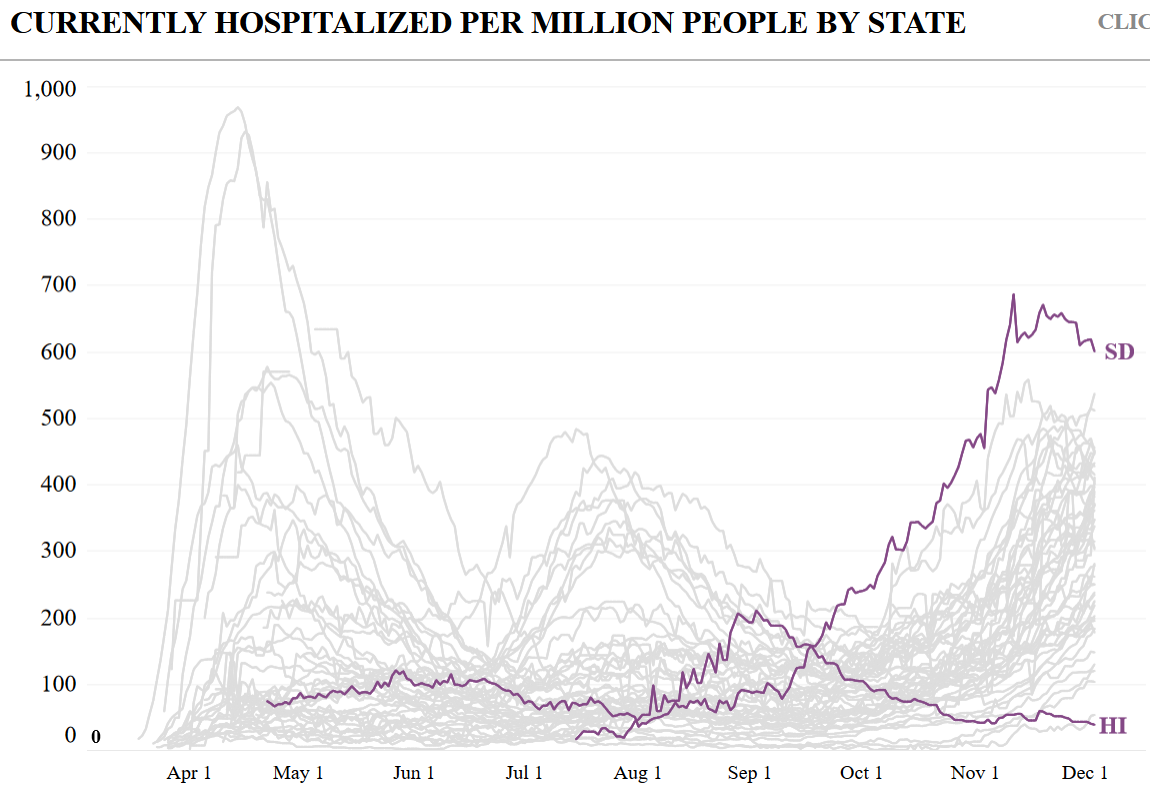 In summary, sharply rising cases, hospitalizations, and deaths are a genuine concern, and states, cities, and individuals are well advised to take strong measures to stop this third wave before it gets out of control. But that's no excuse for hysterical, fact-free articles...

Click here to read the rest of my e-mail, in which I share the latest data from Florida and Italy, a Bloomberg article on The Best and Worst Places to Be in the Coronavirus Era, a 60 Minutes segment on COVID-19 "long haulers," and what I've learned about getting both rapid and PCR tests.