1. After tumbling 23% yesterday in the wake of Gabriel Grego’s epic takedown at our shorting conference (slides and video here and here), Aphria (APHA) crashed another 26% today in light of the company’s laughably non-responsive response, which was easily rebutted. Some hilarious stuff on Twitter, such as this: 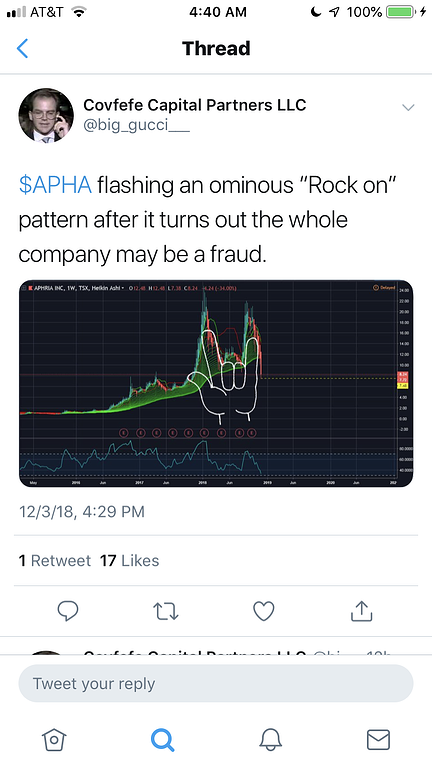 2. In addition to Gabriel, Chris Brown of Aristides Capital also gave us permission to share his presentation. Chris is one of the smartest investors I know. He started his fund with $500,000 about a decade ago and has put up incredible numbers, earning it the #1 Sortino Ratio among equity long-biased funds from the market bottom in March 2009 through 2017, according to BarclayHedge. Consequently, Aristides has grown to just over $100 million today, despite being in Toledo, Ohio of all places. (Chris isn’t looking to grow much larger, as his strategy focuses on a lot of small caps and special situations.)

Yesterday, Chris gave a great presentation on why he’s short yet another foolishly valued pot stock, Tilray (TLRY), which you can download here. He shares my belief that, even though it’s down by nearly 2/3 since Sept. 19 (when I called the peak on live TV at the exact hour it peaked at $300), it’s an even better short today now that the bubble has burst and the collapse is well underway.

3. Speaking of smart investors, my friend Zeke Ashton of Centaur Capital in Dallas decided to close his fund recently. The investing world is poorer for having lost a great investor, writer and teacher – and a true class act. Here’s a picture of us at Guy Spier’s wedding in Mexico in 2003: 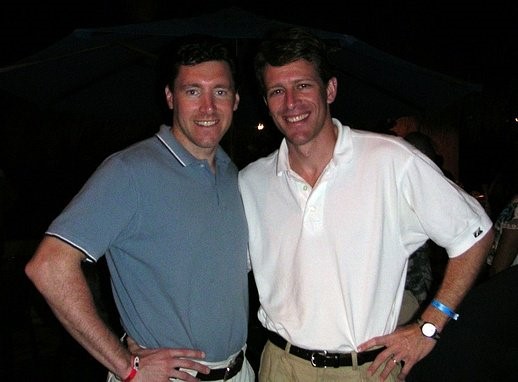 Zeke and I met in the crazy days of the internet bubble nearly two decades ago when we were among the few value guys writing for the Motley Fool. When he decided to launch a fund in 2002, I was one of his seed investors (my single greatest investment of all time on an IRR basis!) and later backed him to start and manage the Tilson Dividend Fund under our umbrella when we got into the mutual fund business.

While he didn’t keep up with the long bull market since then, on a risk-adjusted basis, he did well until the very end, as you can see in this beautiful final letter that he sent to his investors yesterday. In it, he makes a very important point about the value of a fund like his, which managed volatility well, vs. a passive index like the S&P:

Despite the buy and hold returns of the S&P500 for the period, my view is that Centaur added considerable value for many investors that is not captured in the cumulative returns above. The reason for my belief is simply due to recognizing the behavioral realities of investor decision making. What I can tell you from personal experience is that very few investors, and particularly those in passive broad market index products, did not get shaken out of the market at some point in two bear markets of 2000-2002 and then again in 2008-2009, or even at any one of several other junctures over the years.

Let’s look at an actual real world “worst case” experience for Centaur Value Fund investors versus that of the S&P500 Total Return index fund. CVF investors had only to endure one peak-to-trough decline in value of greater than 25% throughout the Fund’s entire tenure, that being a mark-to-market loss of 29.9% running from July of 2008 through March of 2009. However, CVF recovered fully from these losses and reached a new high within twelve months. Additionally, CVF had generated a greater than 30% return in the twelve months immediately prior to July 2008, offering CVF investors a bit of extra “emotional buffer” to draw upon during the period of intense fear and uncertainty that was to follow. A number of CVF investors actually found the conviction to add to their investments when markets were at their scariest point in late 2008 and almost all CVF investors at least held tight and came through the period with both capital and psyche fully intact.

The S&P500 Index, by contrast, declined by more than 50% from November 2007 to February of 2009, and it then took 53 months for the index to recover those losses (and 58 months to sustainably surpass the old November 2007 high). I can assure you that many (and maybe most) “buy and hold” investors struggled to hold on during this very long and very difficult period. And not only did many investors capitulate and sell during this time, but many also likely paid taxes on accumulated gains from prior years – or at least they did if they had any gains left. Finally, of course, these same investors would be left struggling with the difficult decision of when or if to jump back into the markets again as the stock market eventually recovered.

I won’t say that Centaur Value Fund investors were unaffected by occasional market turbulence, but I can confidently say that very few were shaken out at the worst times.

I believe that Centaur’s biggest value-add was protection against the extremes of the market, particularly the defense against deep losses, that prevented CVF investors from the classic behavioral mistakes of buying high and bailing at the lows.

Zeke also wrote some wise words in his September 2017 letter (at the exact time I closed my funds), which I think capture well what I call “the lament of the value investor” in this long, complacent (until recently anyway!) bull market:

This is probably a good time to make it clear that we find ourselves slowly and carefully moving the acceptability lines at the margins of our buy and sell discipline in our efforts to keep capital productively deployed in this very expensive market. We are doing our best to be both thoughtful and prudent about how much we do so. We know that the temptation to change one’s valuation standards in and of itself is probably a late market cycle indicator. However, I do think that some accommodation and adjustment to our discipline on the sell side was probably somewhat overdue. I think we’ve historically been too quick to pull the sell trigger and accept a good outcome on certain investments when we could have held on longer and gotten a great outcome.

… First of all, let me say that I personally am not convinced that the lack of any overt signs of euphoria or wild speculative participation on the part of retail investors means that stocks cannot suffer either a material correction or a bear market given the current valuation levels.

… One of the reasons I’m writing this letter now that I believe most investors systematically underestimate how they will be affected when a correction or a bull market comes. Stocks have been going mostly up for nine years now, and it feels like they will never – and maybe even can never – come back down. When thinking about it in the abstract (if they think about it at all) most people naturally believe that in times of stress that they will behave rationally, and that they won’t be among those who panic and sell at the worst possible time. The reality, of course, is that most investors aren’t so rational when the time comes, because when stocks are going down they feel like they might never go back up.

… We also want to remind you now that the Fund’s strategy is designed to be resilient and to handle stormy weather, and it has weathered corrections and even bear markets in the past and come out the other side reasonably well intact. Also, I’d like to remind you that to some extent ours is a strategy that needs a certain amount of volatility and the occasional market correction in order to re-stock the portfolio with bargain securities in order to produce the returns we are seeking. The really great investing opportunities are almost always found in environments of fear and doubt, and it is critical to our strategy to have strong hands during such times. It’s for this reason that we won’t be lulled into complacency by the market’s recent strength or the current low volatility levels.

4. I’ve long believed that Brexit is so massively stupid that it might not go through. Can you imagine the disruption if California decided to secede from the U.S.?! Well, the odds of no Brexit just went up quite a bit (I’d guess from 20% to 40%) in light of this opinion today by the European Court of Justice official “that the U.K. can back out of its fraught decision to leave the trading bloc without permission from other members.” EU Court Throws Wrench Into Fraught Brexit Debate. Excerpt:

The opinion of the European Court of Justice official, which requires confirmation in a final court ruling, says the U.K. can unilaterally stop the process of leaving the EU. Brussels and the U.K. government alike have argued it could not. A final ruling is expected within the next few weeks. The court generally follows the official’s legal advice but there have been frequent exceptions.

The British Parliament is set to vote on Dec. 11 on whether to ratify the Brexit deal that Prime Minister May spent nearly two years hammering out. The deal has been criticized by lawmakers on both sides of the Brexit debate and Parliament is expected to reject it by a wide margin. The focus in Westminster is now not on whether the government will be defeated, but by how much.

… For Mrs. May, the ECJ’s opinion is bittersweet. One of the key selling points the prime minister makes to wavering lawmakers is that rejecting her deal could mean the U.K. quits the EU in March with no deal at all, causing huge economic disruption. Now, opponents of Brexit can point to Tuesday’s opinion to argue that Britain can avoid that outcome by simply reversing its decision to leave the EU.

On the other hand, the opinion reinforces another key argument Mrs. May is making to anti-EU lawmakers: If they don’t back her deal there may be no Brexit at all.

5. I’m bummed that I’m going to be out of town this Friday so will miss the Project Punch Card Value Investing Conference, which features top speakers including David Abrams, Murray Stahl, Alice Schroeder, John Rogers, Paul Isaac, John Levin and Cheryl Einhorn. It’s $995 for a worthy charity. Further information is here and registration is here.