Editor's note: Today and tomorrow here at Empire Financial Daily, we're sharing essays from our friend and colleague Joel Litman over at our corporate affiliate Altimetry...

Regular Empire Financial Daily readers will recognize Joel – he's a forensic accountant and CPA who has lectured at Harvard, Wharton, and the world's top CFA societies. At Altimetry, Joel and his team use their "Uniform Accounting" methodology to analyze financial statements – making dozens of adjustments to determine companies' real earnings and financial health.

In today's essay, Joel explains why he believes the U.S. Federal Reserve is taking the right steps to navigate the inflationary environment – even though it might trigger an "earnings recession"...

Many of the issues our economy is facing today are the result of a massive demand spike following the COVID-19 pandemic.

Consumer demand for goods has reached historic levels... And supply chain deficiencies mean the market can't satisfy this demand. That's what has led to the sky-high inflation we're currently seeing.

The Fed is trying to control that inflation. And historically speaking, the best tool in its arsenal is interest rates.

The Fed controls the rate commercial banks pay to borrow money overnight – called the federal funds rate. This is effectively the lowest interest rate in the economy.

Raising the federal funds rate slows down borrowing, because banks must increase their own rates to pay for borrowing money. In turn, that means loans across the economy become more expensive.

Investment in the supply chain will eventually improve the inflation picture... But it will take time for these changes to take effect.

In the meantime, the Fed is hoping that reducing demand through higher rates will be a quick fix.

But while this solution might make us feel better in the long run, it likely won't be painless...

Declining demand will lead to slower revenue growth for companies. Additionally, manufacturing costs will stay high even as demand falls. This hurts earnings since companies can't make the same profits they recorded in 2019.

Both Morgan Stanley (MS) and Goldman Sachs (GS) project corporate profit margins will decline in the second half of 2022 as a result of the Fed's actions.

We may even be on the verge of an "earnings recession" on an as-reported basis. In simple terms, that's two or more consecutive quarters of declining earnings.

Uniform Accounting backs up this theory...

At my company Altimetry, we use Uniform Accounting to strip out the more than 130 inconsistencies in generally accepted accounting principles ("GAAP") and international financial reporting standards ("IFRS") to provide investors with a more accurate picture of a stock.

Our aggregate return on assets ("ROA") data, which measures returns for all companies in the universe of stocks we track, agrees with Morgan Stanley and Goldman Sachs.

In recent analyses for our paid subscribers, we've warned that an earnings recession is on the horizon.

We can see this by looking at what has happened to expectations for ROA. In July, ROA was projected to rise in 2022 thanks to strong earnings in the first half of the year. Take a look... 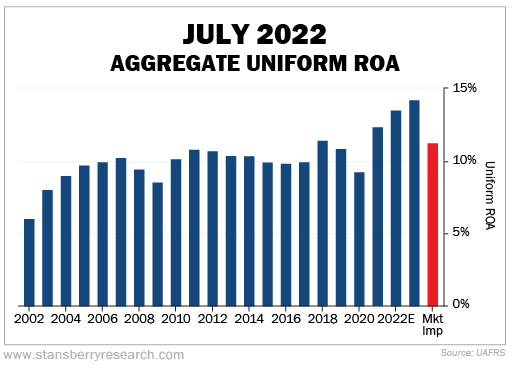 But things have changed... The aggregate ROA chart now shows that earnings will remain flat in 2022 because of a weaker second half of the year. 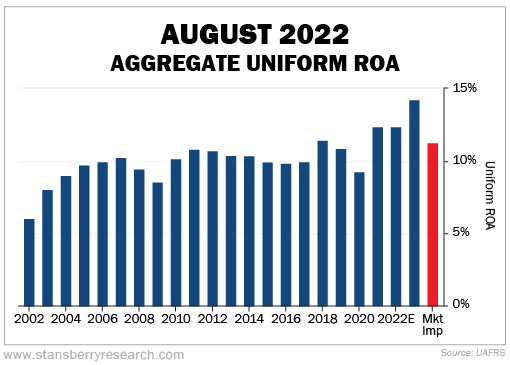 If ROA remains flat this year and company investments don't grow, we could really end up in an earnings recession.

But that doesn't necessarily spell doom and gloom for the economy...

In the short term, inflation has remained high. But credit markets are tightening, and earnings growth is slowing down. While it may not be the quick fix the Fed wanted, these are signs that the agency is beginning to put the brakes on inflation. And it will be able to lower rates during the next recession.

Plus, expectations for 2023 ROA remain at an all-time high of 14%. So while high rates might stunt near-term earnings and economic growth, these measures should start to heal in 2023.

Interest-rate hikes will help stabilize the economy in the long run. We aren't out of the inflationary woods yet... But the Fed is taking the right steps toward navigating it.

Editor's note: While most Americans will spend the coming weeks worried about another market crash... spiking inflation... and a looming recession... Joel says they will be totally blindsided by a crisis no one is talking about. In fact, according to Joel, it's already here.

At 8 p.m. Eastern time tomorrow, September 22, Joel is going on camera to share the financial story no one else is telling... and the exact steps to take with your money to prepare. He'll even by joined by 50-year Wall Street legend Marc Chaikin to help break the story. Reserve your spot for this free event right here.