America's Billionaires Had an Amazing 2020

► As we have heard before, 2020 was a banner year for billionaires…

Despite the unlikely backdrop of the pandemic, wealth creation among the mega-rich was simply staggering. We’ve all heard ad nauseum about the surge in market cap for the Big Tech leaders and the corresponding rise in net worth for founders and those at the helm of those companies.

But the surge in the markets conspired with the banner year for initial public offerings (“IPOs”), cryptocurrencies, and special purpose acquisition companies (“SPACs”) to make this an absolutely mind-boggling year of wealth accumulation for the ultra-rich, as captured by the annual Forbes Billionaire list, which came out this week. 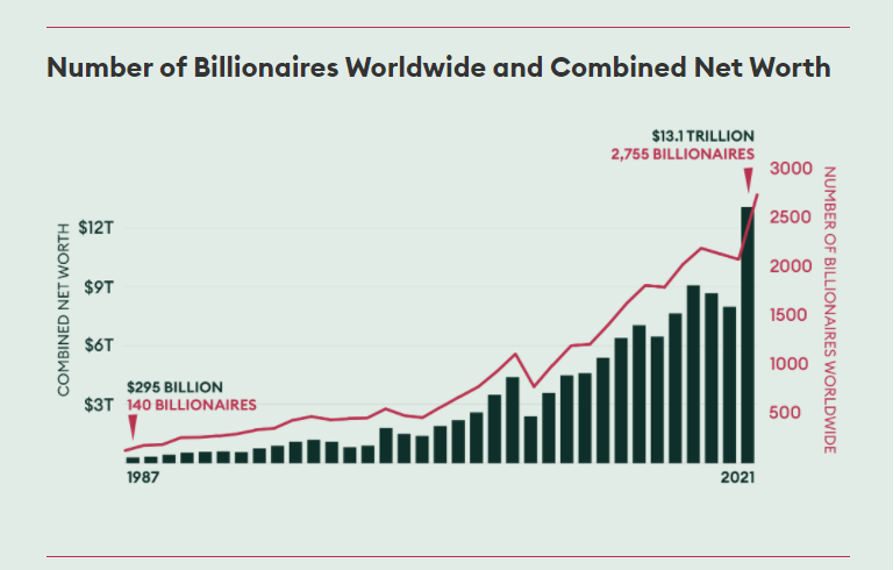 At the top of the list sits Amazon (AMZN) founder Jeff Bezos at $177 billion – and that’s after giving away a substantial fortune to his ex-wife, philanthropist MacKenzie Scott, who sits at No. 22 with a fortune of $53 billion.

Behind Bezos at No. 2 is Tesla (TSLA) founder Elon Musk, who made a big move up from No. 31 last year, as his personal net worth jumped a jaw-dropping $126 billion, thanks to the epic 700% rise in TSLA shares.

France’s Bernard Arnault, who sits atop the luxury conglomerate LVMH (MC.PA), rounds out the top 3. Arnault repeats at No. 3… but he is $74 billion richer this year, nearly doubling his net worth in 12 months.

Among the newcomers on the list, some familiar names… Bumble (BMBL) dating app founder Whitney Wolfe Herd, whose company went public in February… movie and TV producer Tyler Perry, who built his fortune upon the success of his “Madea” film franchise… Apple CEO (AAPL) Tim Cook… SPAC King Chamath Palihapitiya and serial SPAC sponsor Bill Foley… the Winklevoss twins, who lost out on a fortune in Facebook (FB) shares but took part of their settlement and plowed it into Bitcoin… rapper and entrepreneur Kanye West, on the back of his Yeezy sneaker line’s success at Adidas (ADDYY)… and his soon-to-be ex-wife, Kim Kardashian West, who has made her fortune selling shapewear and cosmetics.

In an overnight success nearly 250 years in the making, Austrian brothers Alex and Christian Birkenstock, heirs to the eponymous shoe company – which was founded in 1774 – made their debut this year. It feels a little ironic that what once was a symbol of anti-materialism has catapulted the pair into this elite club.

The U.S. still leads the list, but China is not far behind…

In addition to IPOs, SPACs, and crypto, one other area was a notable sector of wealth creation last year: COVID-19-related health care.

While we’ve seen much handwringing over the wealth accumulated by those who profited from the pandemic indirectly – like founders of e-commerce and other digital companies that saw demand skyrocket – there’s a group that made its money much more directly.

The Forbes list includes 40 newly minted billionaires in this category. Among them is Jianquan Li, president of Chinese PPE-maker Winner Medical, which saw orders of masks and other protective items explode.

With 40 leaders or founders of pharmaceutical, biotech, or medical equipment companies fighting COVID-19 making the list, the pandemic was big business… and a money-maker for those well beyond the Silicon Valley crew that we have heard about so often over the last year.

While some of the self-made billionaires are inspiring as inventors and thought leaders, even those folks have well-documented shortcomings. More importantly, they live a life completely removed from our own… yet many people obsess over this list and those on it, even if they have no connection whatsoever to our collective daily reality.

As charitable as many of these folks are, they just keep getting richer. I had a good chuckle a couple of years ago when François Pinault (No. 32), chairman of luxury goods conglomerate and Gucci owner Kering (KER.PA), generously donated €100 million to the restoration of Paris cathedral Notre Dame in the wake of its devastating fire.

The next day LVMH’s Arnault, whose company owns Gucci’s rivals Louis Vuitton and Christian Dior, jumped in with his own €200 million donation to the cause. The one-upping was comical and entirely predictable, as well as a reminder that this cohort plays the game on an entirely different level from what most of us mere mortals could ever comprehend. At least the friendly competition benefited a good cause.

The mega rich can’t give it away as fast as they make it, though… Even after famously giving away $6 billion to nonprofits – probably the most ever given by a living person in one year – Mackenzie Scott still ended 2020 much richer than she entered it, thanks to the big rise in AMZN shares.

With outsized wealth, usually outsized power follows. It’s something many of us worry about in the abstract, so I was interested to see new polling data about billionaires gathered in February by Vox and Data for Progress.

We are wary of them, but don’t necessarily begrudge them their success.

In a divided America, one thing a lot of people can agree on is feeling negative or ambivalent about billionaires.

Only 36% of people polled regard them positively… and things don’t look so different along political lines… 35% of Democrats indicate positive feelings toward billionaires versus 40% of Republicans… Independents are more negative, with just 29% indicating a positive bias… 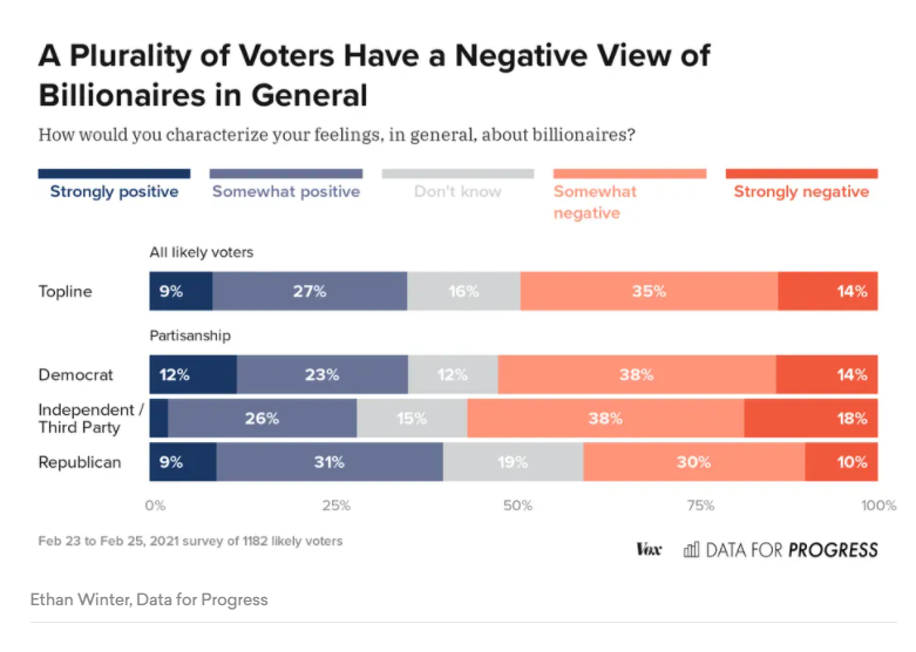 Turning to the tech titans that are constantly in the spotlight… Microsoft (MSFT) founder and philanthropist Bill Gates had the highest number of favorable ratings, but also unsurprisingly garnered a high number of detractors, making him a fairly controversial figure.

Tesla’s Musk sat just behind Gates in terms of favorability, but with fewer detractors… if you calculated this like a net promoter score and subtract unfavorable ratings from the favorable ones, Musk wins the popularity contest hands-down. 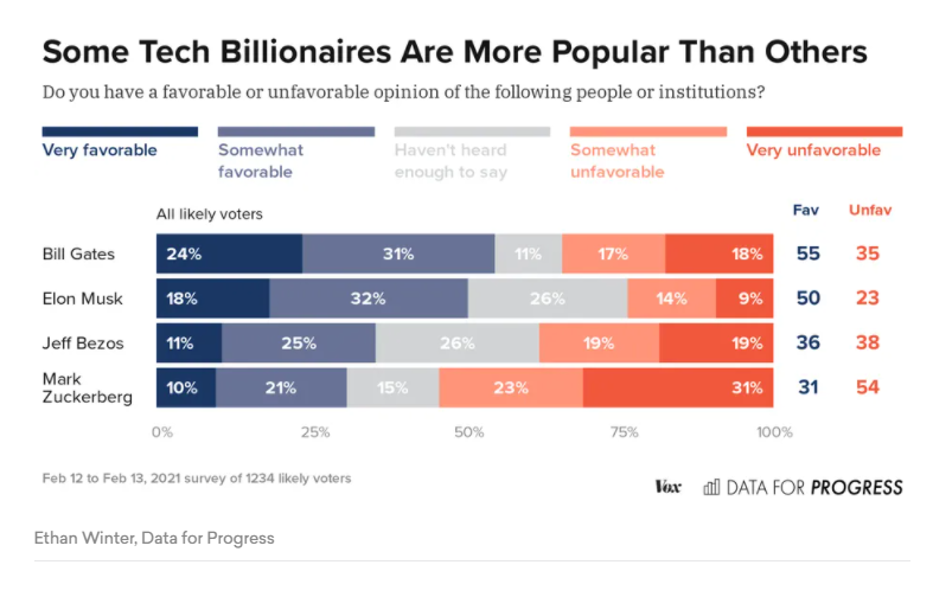 Despite the lack of love for billionaires overall (and certain individuals in particular), the poll showed little evidence of a rejection of the capitalist society that produces these figures…

An entire class of politicians has staked their careers on populist rhetoric about “evil billionaires,” and a whole other group has suggested a burgeoning and large movement to reject capitalism. 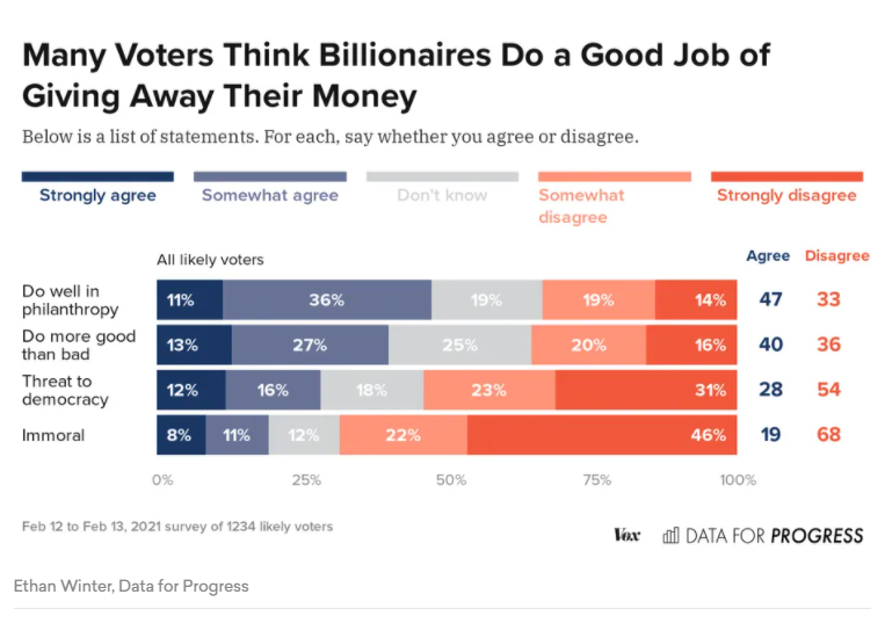 The majority of respondents, however, didn’t think billionaires could be relied on to fix society’s problems. According to Vox…

When asked which is a better fix for the country’s problems during the pandemic – raise taxes or seek more charity from the wealthy – 52% chose the former and 38% indicated the latter.

Americans have a love-hate relationship with our billionaires…

It’s why we care about the Forbes list every year, even though most of us would agree it’s hard to swallow that Bezos made $13 million per hour last year… 867,000 times what he paid the lowest-wage workers at Amazon. Most people think that ratio is wrong, but we still love cozying up on a couch under a weighted-blanket eating snacks delivered within 48 hours by Amazon, as we settle in to watch Prime Video’s Fleabag or perhaps The Crown or Ozark on Netflix (NFLX), delivered, of course, by Amazon Web Services (“AWS”) technology.

We also know that billionaires use their money to exert pressure over politicians, the media, and society at large… but we love what they created and many of them are pillars of the innovation and creativity that are perhaps the most valid argument for American exceptionalism. And how would we have gotten through the last year without our fast deliveries, our Google Classroom, and our WhatsApp to keep us connected to the loved ones we couldn’t visit?

Perhaps the best way to summarize how the average American feels about billionaires is with the cheekiest of Facebook relationship statuses: “It’s complicated.”

In the mailbag, a reaction to Monday’s essay on the “Ponzis Go Boom” blog post and thoughts on censorship within China…

Do billionaires have too much power within society? Please do me a favor and take this one-minute survey here, and send your longer thoughts in an e-mail to [email protected]

“Kupperman uses the old analogy of a Bubble bursting to describe the High Tech Internet stock market wreck in 1999-2000 to think about the risk associated with today’s stock market.

“It is also useful to think of market risks in terms of the initiating factors of an avalanche or a mud slide: the steepness of the ‘angle of repose’ of the side of the snow-covered mountain or the slope of muddy hill. These are intrinsically unstable geological settings prone to sudden change. Once the ‘angle of repose’ exceeds a certain value say 25-30 degrees, it doesn’t take much (a little extra snow, the weight of a single skier, a little rain fall) to precipitate the avalanche or the mud slide. Gravity simply takes over.

“The digging of the Panama Canal was beset with constant mud slides as the construction crews dug through the mountains because of the depth of trench and the steep sides of the canal and the almost constant rainfall nearly always exceeded the angle of repose associated with spontaneous mudslides. David Mccullough’s book The Path Between the Seas (1977) discusses the challenge of mudslides along with several others constructing the canal (illness, Yellow Fever, malaria, draining swamps, recruitment) from 1870-1914. Now’s that’s an infrastructure project that helped to make the United States a world power militarily and economically.

“Right now the ‘angle of repose’ of the US Stock Market is extraordinarily steep and intrinsically unstable and liable to fall from any number of factors: rising inflation, price shocks due to supply shortages, suddenly increasing interest rates, a Red China military invasion of Taiwan, investor appreciation of the logistical risks associated with Red China and the reconfiguring of international supply lines, a big corporate or personal tax increase, or as Kupperman suggests a surge in supply of stock released by corporate insiders latter this year.” – Gerard O.

“I’m not surprised by China’s censorship and treatment of its people, unfortunately. I can’t remember if I shared this story with y’all already, my apologies if I’m repeating myself.

“I studied with Chinese colleagues in grad school. One of my classmates walked down the hall looking very upset. I asked her what was wrong. She said that here, we waste things, but that China wastes intellect. I asked her to explain, and she said that when she and her husband, both engineering Ph.D.s, went back to China, they would be put in the fields for at least 2 years before they were ever allowed to teach or work because they were abroad and knew the truth about Tiananmen Square. They had a toddler in China staying with grandparents; there was no question of them not going back.

“All I could do was hug her. Her words have stayed with me all these years.

“The Chinese students that I’ve studied with have been wonderful. They have a quiet clarity to their approach to any problem that I envy.

“I’ve been blessed to have studied and worked with so many people from other cultures. Thanks for all that y’all do!” – K.