A special place in hell for Purdue Pharma and Mallinckrodt; Lights Out: Pride, Delusion, and the Fall of General Electric; The world's best-performing large-cap stock; Global Entry open to New Yorkers again

1) You know, I really shouldn’t be so hard on Eastman Kodak (KODK)…

Whatever the company’s sins (which my colleague Berna Barshay covered in her always-outstanding Empire Financial Daily yesterday), they pale in comparison to those of companies like drug makers Purdue Pharma and Mallinckrodt (MNK), for which there is a special place in hell. They – especially Purdue – largely created and then fueled the opioid epidemic that has been killing approximately 125 Americans every single day for nearly 20 years. (For background on this calamity, I included a number of links in my July 22, 2019 e-mail.)

Both firms were in the news this week. Here’s a Wall Street Journal article on Purdue: Justice Department Seeks as Much as $18.1 Billion From Purdue Pharma. Excerpt:

The Justice Department is seeking as much as $18.1 billion from bankrupt opioid maker Purdue Pharma LP, new filings show, a demand that could disrupt the company’s monthslong effort to reach a settlement with states and local communities that accuse it of helping fuel the opioid crisis.

The filings, made by the Justice Department in connection with Purdue’s bankruptcy case, also telegraph for the first time the nature and scope of yearslong criminal and civil investigations into the OxyContin maker.

Federal prosecutors are investigating whether Purdue’s marketing and distribution of opioids violated criminal statutes including anti-kickback laws, misbranding under the Food, Drug and Cosmetic Act and conspiracy, according to the filings.

On the civil side, they are looking at whether Purdue offered kickbacks to doctors and pharmacies to encourage them to prescribe and dispense more OxyContin, and whether the company transferred cash to hide money from creditors, the new filings show.

It’s taken longer than I thought it would, but the end appears near as the company’s stock crashed earlier this week. MNK shares closed yesterday at $1.54 after the company revealed in its second-quarter earnings report the “possibility of a filing for reorganization in bankruptcy…” Good riddance!

2) Speaking of troubled companies, this recent article in the Financial Times, Why the U.K. tax authority is accusing General Electric of a $1 billion fraud, reminded me that I wanted to share my thoughts on the book I just finished, Lights Out: Pride, Delusion, and the Fall of General Electric.

It documents the utter collapse of one of the world’s most iconic businesses, resulting in the destruction of more than $500 billion in market cap since 2000, when the company was briefly the most highly valued in the world. This New York Post article captures the sordid story well: How a power-hungry CEO drained the light out of General Electric. Excerpt:

For years, GE’s profits had been a mirage built on whirlwind mergers and accounting sleight of hand. The funds that had been doled out to shareholders as fat dividends – and had covered its managers’ lavish perks and pay – had largely been borrowed on the strength of the company’s golden credit.

The book’s authors paint a damning portrait of Immelt’s 16 years at the helm of GE, where a rubber-stamp board of directors allowed him to hemorrhage money almost unchecked.

Immelt was just 45 when he ascended to the top spot in September 2001, succeeding business legend Jack Welch. A charismatic, natural-born salesman, Immelt’s boundless optimism fueled a strategy of continual expansion, as he went fad-surfing after the buzziest new ventures.

At Immelt’s urging, GE’s many arms “overpaid for businesses they didn’t understand and then [were] crushed by the market,” Gryta and Mann write.

On his watch, GE bumbled into the subprime mortgage business shortly before the 2008 crash, leading to deep losses that pushed its stock into single-digit territory. Immelt spent $14 billion on an aggressive expansion of GE’s oil and gas holdings – just as the fracking boom cratered the price of crude oil. The digital division he set up in Silicon Valley and showered with $5 billion of capital never managed to produce the machine-learning platform he touted.

Meanwhile, GE’s corporate structure placed Immelt at the top of its board of directors, essentially making him his own boss.

“The board didn’t entirely understand how GE worked, and… Immelt was just fine with that,” the authors write. The well-compensated board members were chosen for their willingness to cheer Immelt on – and he readily ejected directors who objected to his plans.

At the same time, GE’s established divisions were expected to meet earnings goals far removed from reality. “Under Immelt, the company believed that the will to hit a target could supersede the math,” Gryta and Mann report.

It was a recipe for a disaster. Up-and-coming middle managers knew that a missed goal could stymie their climb up GE’s ladder; division heads “didn’t necessarily know how his underlings got to the finish line and it didn’t really matter,” the authors write.

I’ve periodically been tempted by GE’s beaten-up stock, but fortunately a couple of friends who used to work there have always – correctly! – warned me to stay away (and continue to feel that way). It’s an easy decision once I look at the company’s dreadful financials, with minimal free cash flow and $62 billion of net debt.

3) Can you guess which stock that had at least a $1 billion market cap 18 months ago has appreciated the most since then?

It’s one I’d never heard of: Sea (SE), a Singapore-based gaming, e-commerce and payments company whose stock, which trades on the New York Stock Exchange, has soared 880%, trouncing Tesla (TSLA) and Apple (AAPL), as this chart from Bloomberg shows: 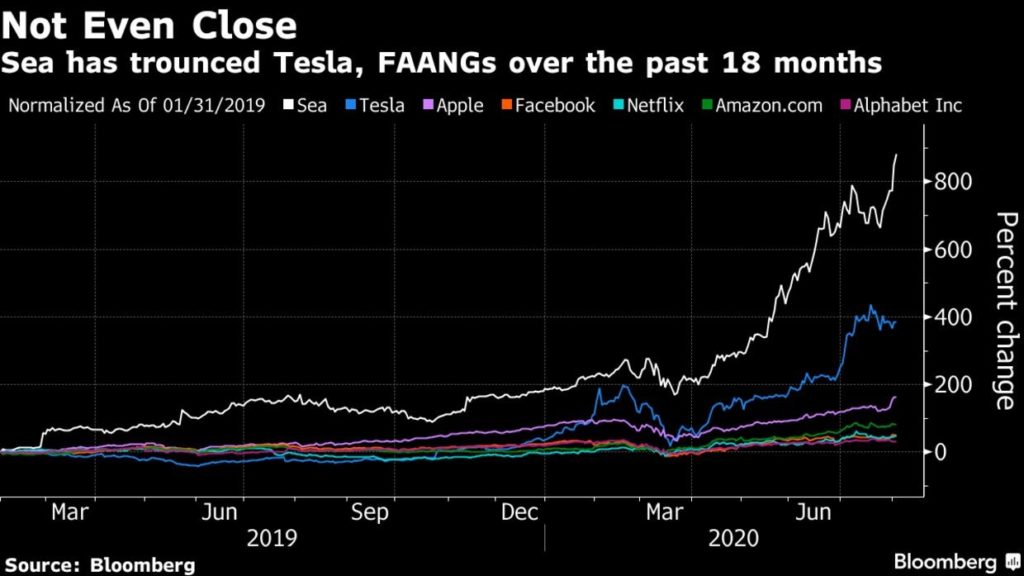 Here’s a Bloomberg article about it: The World’s Hottest Stock Is a Money-Losing Tech Giant Soaring 880%. Excerpt:

After a rocky first year of trading, Sea’s stock has gone on to trounce everything in its class. Initially, the gains were fueled by the runaway success of Sea’s first self-made mobile game – a battle royale called Free Fire that has attracted as many as 80 million daily active users in more than 130 markets.

But Sea’s e-commerce and financial services units are now increasingly important pillars of the bull case. Its Shopee platform overtook Alibaba’s (BABA) Lazada in the fourth quarter of 2019 to become the top e-commerce provider in Southeast Asia, according to research firm iPrice, and the business accounted for more than 40% of Sea’s revenue in 2019, up from 2.3% in 2017.

SeaMoney, which offers everything from e-wallets to micro loans, could ultimately be just as large, according to Li. “We think this is a huge business opportunity,” he said…

DBS Bank Ltd. analyst Sachin Mittal downgraded his recommendation on Sea to sell in July, citing Indonesia’s new tax regulations for cross-border transactions and the likelihood of the company burning through cash to grow its payments business. “There is a tech bubble right now,” he said in an interview. “Sea’s stock is overvalued and it’s partly a reflection of the industry”…

Skeptics note that Sea faces deep-pocketed competitors in all of its main businesses, from Lazada to Grab Holdings Inc. and a slew of other up-and-comers in digital finance. Meanwhile, Sea’s gaming unit has yet to prove it’s more than just a one-hit wonder.

“We could have a post-Covid situation where the jack-up in revenue does not materialize, and the gaming business is doing well but rests on only one popular game,” said Nirgunan Tiruchelvam, head of consumer equity research at Tellimer Ltd.

Call me old-school, but after this kind of run-up, with a $65 billion market cap and trading at 25 times revenues, I wouldn’t touch this with a 10-foot pole…

4) I travel overseas a lot (at least I used to!), so I was one of the first people to sign up for the new Global Entry program when it launched five years ago. It allows me to skip what are often long lines going through customs when I return to the U.S.

If you travel outside of the U.S. at all, it’s a no-brainer to get… The program only costs $100 for five years – and when you get it, you also get TSA Precheck, which expedites your security screenings at domestic airports (TSA Precheck costs $85 for five years, so Global Entry is only an extra $15). Even better, many high-end credit cards like a Platinum AmEx and Chase Sapphire Reserve cover the $100 fee.

But until last week, New Yorkers like me had, since February, been prevented from enrolling in Global Entry (or, in my case, renewing). This was due to a dispute between the Department of Homeland Security (“DHS”), which administers the program, and the state’s new policy of refusing to disclose driver’s license information to federal immigration authorities absent a court order.

According to this editorial in the Washington Post, The Trump administration just admitted it lied about singling out New Yorkers for punishment, “the government admitted in court papers filed Thursday that Homeland Security officials had made false statements about their February decision to cut off New Yorkers from the trusted traveler program,” so New Yorkers are now no longer being discriminated against. I quickly renewed last week before the DHS changes its mind!