A guy I know is fighting for his life; Three reasons why the odds have shifted against the unvaccinated; Enrique on Pershing Square Tontine Holdings; My trip to Uzbekistan

1) To be a successful investor, one of the most important – yet, for most people, unnatural – things you must be able to do is change your mind when the facts change.

In the missive I sent yesterday to my coronavirus e-mail list, I argue that folks who have chosen not to get vaccinated should reconsider their decision in light of three recent developments. (If you'd like to receive my in-depth e-mails about the pandemic, simply send a blank e-mail to: [email protected].)

Here's what I wrote yesterday...

I'm pretty upset today because a guy I know is sick with COVID and is in the hospital fighting for his life (he chooses to remain anonymous because he's so embarrassed about what's happened). I was begging – even yelling at – him to get vaccinated, but he didn't. He wasn't a hard-core, conspiracy-embracing, anti-vaxxer. Rather, he'd bought into the worry about, "There are no long-term studies on these vaccines," and figured, "Even if I get COVID, I'll be fine because I'm young and fit."

It was a very serious miscalculation for which he is paying a terrible price (I hope not the ultimate one!)... not to mention the price the rest of us might pay (how many others did he infect?) and will certainly pay (the astronomical medical bills).

I want to be very clear about the miscalculation he made in the hopes that it might persuade people reading this to get vaccinated.

Here's what you need to understand: due to three recent developments, the odds have shifted very unfavorably against the unvaccinated.

First, at one time we all hoped that, by now, at least 70% of the U.S. population would have received at least one dose, such that we'd be close to or at herd immunity, which would protect the unvaccinated.

However, right now only 56% of Americans have received their first dose and only 49% – less than half! – are fully vaccinated, due to a variety of unfortunate factors such as the politization of the vaccines, dreadful misinformation spreading like wildfire on Facebook (FB) and other social media, etc (see: 'They're Killing People'? Biden Isn't Quite Right, but He's Not Wrong).

Second, the delta variant has emerged, which is much more contagious than the original virus (see: Delta Variant Widens Gulf Between 'Two Americas': Vaccinated and Unvaccinated, Unvaccinated States Feel Brunt of Delta-Led COVID Uptick, and In Undervaccinated Arkansas, COVID Upends Life All Over Again). Because of this, it has spread rapidly and now accounts for more than half of U.S. cases – I see no reason why it won't soon become nearly all, which is what happened in the U.K. (Stunningly, this is causing many people to be less likely to get vaccinated: Delta Variant Surge May Make Unvaccinated Americans Less Likely To Get The Shot, Poll Finds. This reminds me of the saying: What's the difference between genius and stupidity? Genius has limits...)

As a result of these two factors, if you are unvaccinated, it's HIGHLY LIKELY that you will get COVID. See: CDC Director Warns of a 'Pandemic of the Unvaccinated.'

Third, the evidence continues to mount that you really don't want to get it, even if you don't get very sick, because of "long COVID." Here's another article about it: 'Long COVID' Fears Grow in U.K. as Curbs End and Delta Surges. Excerpt:

For about 1 million people across the U.K. COVID-19 didn't just go away. Instead it lingered, causing exhaustion, shortness of breath, cognitive issues and other health problems.

With England preparing to lift virtually all restrictions even as infections are surging again, scientists are concerned that the numbers impacted by what has become known as "long COVID" will climb much higher...

But millions still remain vulnerable, and those who have endured symptoms for weeks, months – or more than a year – say the long COVID threat is being overlooked as policy makers focus on headline figures of cases, hospitalizations, and deaths.

As the more contagious delta variant spreads, other countries attempting to manage the next phase of their pandemic will likely find themselves facing a similar dilemma...

Prioritizing vaccination for vulnerable older age groups means a lower percentage of young Britons have had their shots in time for the ending of curbs. That concerns Barratt. "Young people feel invincible but this can really happen to anyone," she said.

Barratt said she was bedridden for months after contracting COVID, at times so weak she couldn't roll over or move. Sometimes, she said, it felt like she was comatose even though she awake. During this time Barratt lost her job and has since faced new symptoms, including numbness, pins and needles and chronic fatigue.

For Barratt, one of the biggest difficulties is communicating her plight to others, including doctors and even family and friends. "The illness becomes part of who you are," she said.

While the government has defended its plan, Health Secretary Sajid Javid said cases could reach as high as 100,000 per day and England's Chief Medical Officer Chris Whitty warned that there could be an increase in long COVID, especially in younger people. The U.K. on Friday held out the possibility of restoring some restrictions later in the year.

The U.K. strategy has been sharply criticized. More than 120 scientists co-signed a letter in the Lancet medical journal on July 7, warning that rising infections could leave hundreds of thousands of people with illness and disability "for decades to come." International experts joined their British counterparts online to sound a further warning on July 16.

An estimated 962,000 people, or 1.5% of the population, have experienced self-reported long COVID symptoms in the U.K., according to data from the Office for National Statistics published earlier this month. More than a third of those said they've suffered for more than a year. 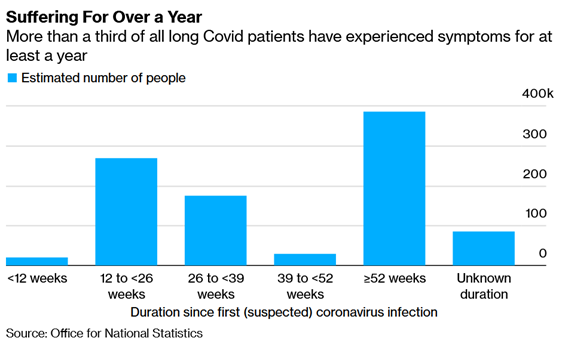 Separately, an Imperial College London study published in June found that 38% of people who caught the virus reported one or more symptoms lasting at least 12 weeks. Researchers estimated that, overall, more than 2 million adults in England may have had long COVID so far...

The prevalence of the condition known as "brain fog" is one of dozens of symptoms that experts say justify calls for a national screening program. Dennis Chan, a principal research fellow at University College London, pointed to the way viruses like SARS-CoV-2, the coronavirus that causes COVID-19, affect the brain.

"We have never seen anything like this in terms of the sheer scale," Chan said in a briefing with reporters.

"Vaccines have massively reduced severe infections and post-vaccination COVID is a much milder disease for most people," Tim Spector, lead scientist on the study and a professor of genetic epidemiology at King's College London said. "The main concern is now the risk of long COVID."

To read the rest of the e-mail I sent yesterday, in which I update the latest pandemic dashboard, decry the GOP and Fox News' campaign against the vaccines, and share links to various articles of interest, click here.

Today's announcement that Pershing Square Tontine Holdings can no longer consummate its transaction with Universal Music Group ("UMG") has to be a disappointment for Bill Ackman – but less so for shareholders.

Ackman had come up with a "super clever" structure that could meet the needs of Vivendi (VIV.PA), the seller of UMG. (You can refer back to our special report on the deal right here.)

Unfortunately, the U.S. Securities and Exchange Commission ("SEC") decided the transaction was too complicated for it. So, it blocked the deal.

Ackman will still be investing in UMG. But he will be using his Pershing Square funds rather than the PSTH vehicle.

So, what does this mean for shareholders? It might actually be a good thing! We absolutely love the music business and think the transaction would have worked out great in the end. But in the near term, the stock market was taking a different view, and the stock had been under pressure. With special purpose acquisition companies ("SPACs"), in general, having been sold off savagely, it's hard to know how much of this was specific to the transaction...

Remember that Ackman always wanted to do more deals after the current one. Being active in negotiations, he's not starting from scratch and still has an enormous war chest. And even though the SEC stopped his plans, he bent over backwards to accommodate UMG, and he still came through with the deal. This is huge for prospective sellers because it shows Ackman is a man of his word...

Ackman looks even better as a prospective partner, still sitting on a massive pile of cash.

Empire SPAC Investor subscribers can read the full update here. If you aren't a subscriber, you can find out how to gain instant access to the update – and the rest of Enrique's research on PSTH – as well as the details on how to get 40% off the first year of a subscription to Empire SPAC Investor by clicking here.

3) In case you missed any of them, here are links to my Facebook posts with pictures and descriptions from my trip last week to Uzbekistan, with stops in Istanbul and Zurich on my way there and back, respectively: