A Closer Look at 'Giving Season' in the Market; A risk-free offer to try Empire Elite Trader; Texas' GDP is larger than Mexico's; GDP trivia; Greetings from Carleton College

1) Following up on my market and macro overview in my September 2 e-mail, I wanted to share another reason why I'm constructive on the market, courtesy of my colleague Enrique Abeyta.

Here's an excerpt from his missive yesterday to subscribers of his Empire Elite Trader newsletter...

A Closer Look at 'Giving Season' in the Market

Soon after launching Empire Elite Trader in 2019, my team and I wrote about one of our favorite subjects in the stock market – seasonality. As we discussed back in November that year...

As much as it goes against the efficient-market hypothesis – the idea that asset prices reflect all information available, making timing the market impossible – "seasonality" can play a huge role in the short-term movement of stock prices.

Even with the rise of "passive" investing, still more than half of assets in stocks are in actively managed funds (funds managed by people).

These funds are compensated based on their performance. For mutual funds, this performance is typically based on how much they outperformed or underperformed a certain index. For hedge funds, it's usually calculated on an absolute basis.

There's a weird quirk around these calculations of performance, though: They're all geared to end at the end of the calendar year.

If you step back and think about this, it really doesn't make any sense...

For instance, a manager could have a flat performance all year, then be up 15% in December and then get crushed in January, and he'll still collect a fat bonus.

Our discussion focused on the extreme incentives that managers have at year-end to drive positive performance. Given that the benchmark S&P 500 Index is currently up more than 20% year to date, we suspect we will be revisiting this concept later this year.

While managers' strongest incentives are limited to just a few months of the year, there are still significant incentives for the four months between now and December.

Beyond the incentives, though, the more powerful factor is the psychological effect that positive performance has on volatility and risk management among managers.

The concept is very simple. If you are a money manager and your year-to-date performance is near flat or negative, you will generally be quite risk-averse.

With the U.S. stock market indexes up 15% to 20% year to date, though, the vast majority of money managers are positive on the year.

Maybe they aren't beating the market, but most of them are sitting on double-digit returns.

This has an incredible psychological effect on their trading.

Most objective observers would agree that we're in a positive period for the economy and stock market. While there are clearly challenges and risks, we have good economic growth, broad stability, and incredible monetary and fiscal liquidity.

We can always argue about risks, but most managers would agree that the market is pretty "good" right now – at least compared to a recession.

However, given the upward momentum in the stock market indexes – and drops in volatility – we are vulnerable to market corrections... and these can be fierce.

If most managers were flat on the year, they would be more likely to sell or "risk manage" into those corrections, which would exacerbate the downward volatility.

But since most managers are up nicely, they are much more likely to buy into any dips. This means that any corrections may prove short-lived and the upward bias in the market is likely to continue.

We have considerable data to prove this point. Just take a look at this table showing the 15 historical instances in the past 50 years (as well as this year's move) when the S&P 500 was up at least 15% through the end of August... 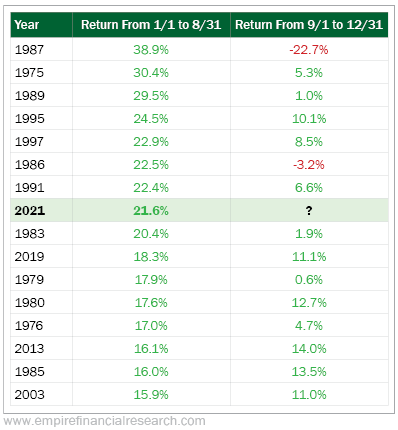 In fact, there was only one time the market got hit really bad – in 1987, with the major stock market crash.

Even including that year, the S&P 500 finishes up 5% on average... and if we remove that year from our calculations, it finishes up almost 7%.

Now, past performance is no true indicator of future performance and – as we learned with the incredible events surrounding COVID-19 in 2020 – anything can happen... but these are powerful factors, and we like the odds of the stock market continuing to move higher through year-end.

Enrique has been knocking the cover off the ball with Empire Elite Trader, Empire Financial Research's only weekly publication. He seeks to hit consistent, short-term singles and doubles, generally buying blue-chip stocks after they've taken what he believes will be a temporary dip – and then selling them once they recover.

His track record since launching Empire Elite Trader in September 2019 has been exceptional: 89% of his closed positions have been profitable, with an average gain of 7% in only 60 days... and average annualized gains of 163%.

Best of all, right now you can try Empire Elite Trader for free for 30 days – just click here.

If it doesn't deliver everything you expect, simply cancel within the first 30 days and get a full refund of every penny you paid. Just call our customer service team on our toll-free number.

Your downside is zero, while your upside could be thousands of dollars or more.

Remember: You can start your risk-free trial today by clicking here and cancel at any time in the first 30 days for a full refund.

Here's some other GDP trivia:

My wife and I are dropping off our youngest daughter, Katharine, to start her freshman year at Carleton, a wonderful, small (2,000-student) liberal arts college that's sort of like a Williams or Middlebury of the Midwest. Our oldest daughter, Alison, graduated from here in 2018 and had a fabulous experience. Here we are with Katharine's roommate and her father, who are from Gustavus, Alaska (population 450 – only slightly more than our apartment building!): 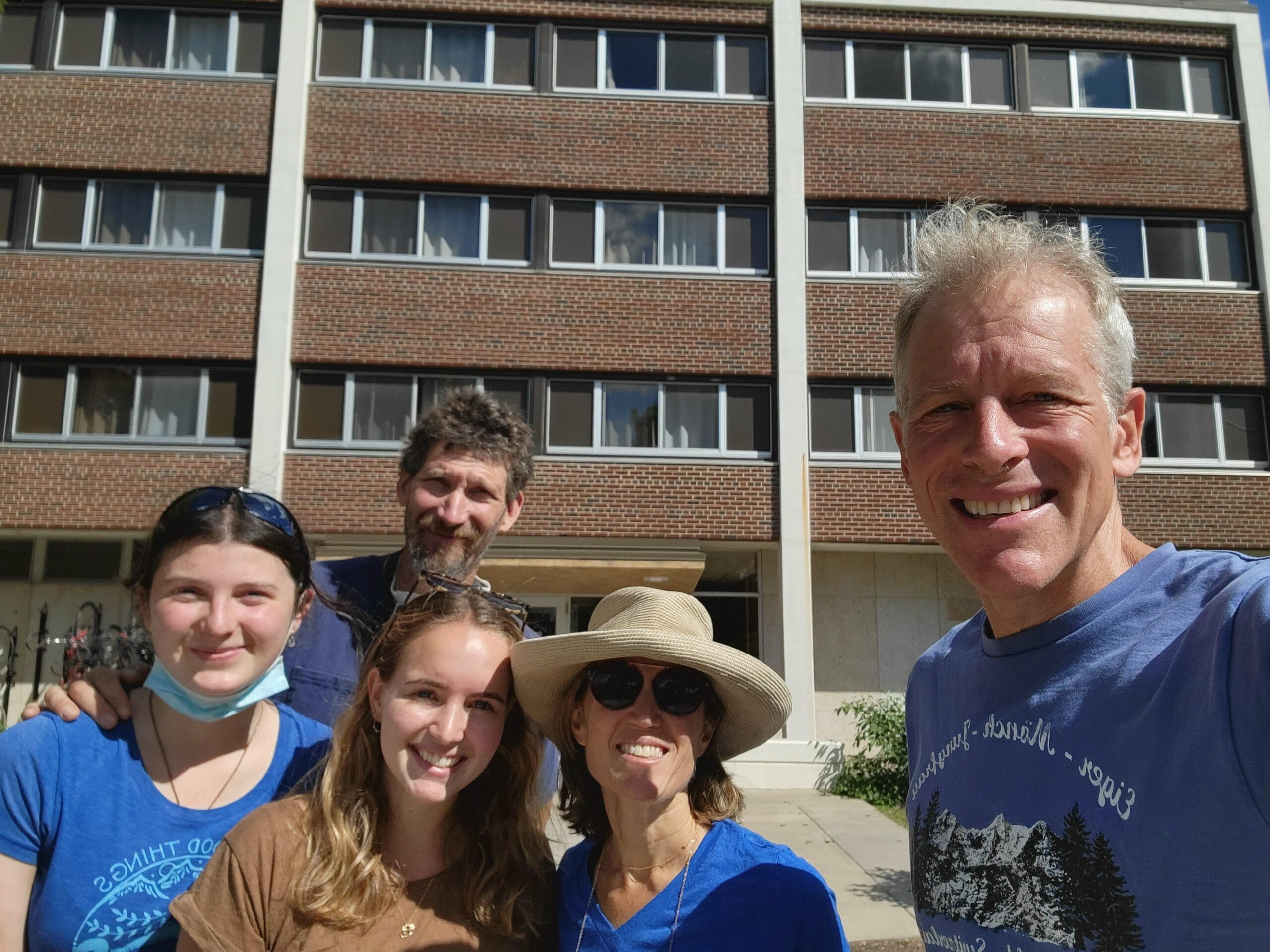 You might think that we'd now be empty nesters, but both Alison and our middle daughter, Emily, who graduated from Wake Forest earlier this year, are both living at home.

Before any of our girls went off to college, I told them that when they graduated, there would be no moving back home – I expected them to be independent and self-sufficient. But when Alison took a job in New York City as a consultant at EY (formerly known as Ernst & Young), which would likely require a lot of travel, it didn't make sense for her to be paying high rent for an apartment she'd barely be using, so she moved back home.

It was supposed to be temporary, but Susan and I loved having her around so much that we begged her not to leave – and three years later, she's still here, saving money like a maniac (nobody seems to take me seriously when I threaten to charge her rent). And now Emily has moved back home as well! Go figure...

I expect that we'll be empty nesters in a year, however, as Alison will likely be going off to business school next fall and Emily, whose new job (she started Tuesday) at Madison Square Garden Sports (MSGS) doesn't require any travel, will probably find an apartment with some friends.