A case study of one of my most successful investments ever: SandRidge Energy

Whenever I have an investment that does unusually well (or poorly), I study it especially closely to see what lessons can be learned, so I can make (or avoid) similar investments in the future.

Before I share my analysis of this investment, allow me to give some background...

For conflict-of-interest reasons, I can't buy any of the stocks that we recommend in Empire Financial Research's newsletters.

This severely restricts the stocks that I can own in my personal account since my first priority is always to give Empire subscribers my best ideas. As a result, half of my stock allocation (which accounts for 66% of my net worth, excluding the value of my apartment; the balance is in cash) is in the SPDR S&P 500 Fund (SPY). The other half is in things that don't fit in any of our newsletters: A small number of private companies (the largest being my cousin's medical device startup and my colleague Enrique Abeyta's heavy metal and tattoo business) plus an odd collection of a dozen stocks, of which SandRidge is the very weirdest.

The company engages in acquiring, developing, and producing oil and natural gas primarily in the U.S. Mid-Continent. At the time of my investment, it owned three oil and gas assets plus its headquarters in Oklahoma City.

It was founded in 2006 and went bankrupt in 2016 when oil and natural gas prices plunged. Upon emerging from bankruptcy in late 2016, the stock briefly traded above $25 before a steady, sickening decline to around $3 by early 2020. Then the world shut down due to the pandemic, oil and natural gas prices fell through the floor, and SandRidge's stock crashed to $0.80 last March.

Here's the stock chart since the company emerged from bankruptcy in October 2016 until the day when I bought it on April 27, 2020: 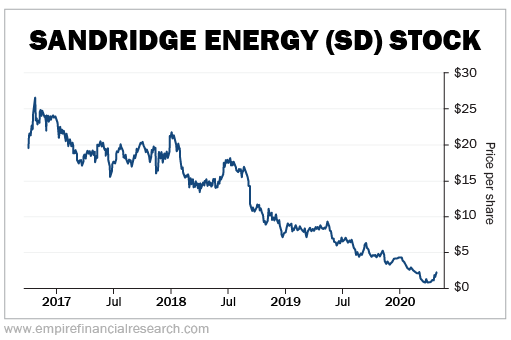 That’s one of the grimmest charts I've ever seen!

You can see why I didn't mention this stock in my daily e-mail or recommend it in my newsletters. It was much too small – at $1.95, it had a market cap of $70 million with $46 million of net debt, for a total enterprise value of a mere $116 million. And the stock chart was certainly indicating that it would soon be filing for bankruptcy again (a so-called Chapter 22 – meaning it filed for Chapter 11 bankruptcy twice).

Worse yet, it was far outside of my sweet spot. Over my entire career, I can only recall investing in the energy sector once – when oil giant BP's (BP) stock was cut in half in the aftermath of the 2010 Deepwater Horizon oil spill in the Gulf of Mexico.

So why did I buy it?

The short answer is that I read a compelling write-up posted anonymously on my favorite investing idea website, Value Investors Club (for background on VIC, see my Aug. 30, 2018 e-mail). It was so compelling, in fact, that I bought the stock that same day without doing any further research. It was that obvious that this investment, while speculative, offered a risk-reward equation that was highly skewed to the upside.

I just found out yesterday that it was posted by my old friend Harris Kupperman of hedge fund Praetorian Capital, who permitted me to "out" him. As you can imagine, I told him: "The next time I see you, drinks are on me!" Here's his LinkedIn profile, here's a link to his great blog, AdventuresInCapitalism, and here’s a link to sign up for his Kuppy’s Event Driven Monitor, which focuses on "event-driven special situation trades."

You can read Harris' entire write-up here. Here are the key excerpts, upon which I based my investment decision:

Investing in SandRidge gives you the ability to purchase a Class B office building in Oklahoma City for roughly the current enterprise value. You also get access to 7.7-8.6 MMBOE [million barrels of oil equivalent] of 2020 production (45% liquids) almost for free. (fair disclosure, my commodity write-ups on VIC have mostly been disasters so caveat emptor)

Now, I get that oil, natural gas, Miss Lime and SandRidge are all dirty words you don't say around investment committees, but there's a price for everything (even this turd) and $1.60 seems too low.

At every secular bottom, you should be able to sum up an investment thesis as; I don't think it gets too much worse, there's a reasonable chance it gets better in the next 3-18 months and if I totally bomb my thesis, I probably don't lose much money at today's prices. Hell, even if I'm wrong, from this price I may actually make some money depending on how bad the worst-case scenario is...

The main takeaways you should have thus far are; SandRidge is very leveraged to natural gas, there are a bunch of assets that may have no bid today, but likely more than cover the EV [enterprise value] under many scenarios, giving you a free look at a natural gas recovery and with existing cash flow and minimal debt, you don't have much risk to wait out what is likely happening in natural gas this fall...

Putting this into perspective, with a much higher SG&A [selling, general and administrative expenses] level and $53 realized oil and $1.48 realized gas, SandRidge had $121 million in cash flow from operations in 2019. Of course, they lit that on fire in North Park and then some, but I'm saying this business can produce a lot more cash flow if oil prices recover in 2021 and North Park gets turned back on and they keep Cap-Ex to some reduced number.

Finally, Carl Icahn has a cost basis of $17. Eighteen months ago, he turned down a take-out at $13 and has now lost 90% of his money. I assume he just wants the tax loss at this point. The new CEO has a history of cutting costs and selling assets. I assume that's the plan here and you get an exit before year-end in that case. How many companies have more in credit facility capacity than the EV? It's actually credit facility accretive to whoever buys this.

There are a lot of $1 midgets in the energy patch that have a lot of upside or can go to zero. I prefer SandRidge as it isn't going to zero anytime soon and could potentially have similar upside.

Look, this isn't a hard-hitting write-up. There are too many moving pieces and too many variables. Corporate disclosure is anemic, I have no idea what the new strategy is and management isn't in a hurry to get on the phone. I am bullish [on] natural gas and think oil eventually recovers. I want to play that recovery, but most options out there involve a lot of financial leverage with a severe risk of permanent impairment if I get it wrong on timing. If my timing is wrong and gas kicks along at $2.25 and oil at $15, SandRidge muddles forward as a perpetual call option for a few years (due to the balance sheet strength), meanwhile everyone else melts away and eventually energy prices recover as there are no producers left. You cannot say that many other companies can survive a long downturn in energy prices, except the large integrated majors, but those guys don't have the same sort of upside that SandRidge does, especially if someone comes along willing to value a few thousand drill sites in the Miss Lime using $4 gas or all the acreage at North Park that actually has decent IRRs [internal rates of return] if oil ever recovers in price. This thing had a $13 bid just 18 months ago in a $50 oil and $2.50 natural gas environment. I could see us back there in the future and if not, I don't think you lose badly from today's price.

That's all I got, please gimme a 2 on this write-up and we can all talk tankers some more.

In my next e-mail (or two), I'll highlight the key things about this investment that led me to conclude that it was so compelling that I not only bought it on the spot but didn't sell a share until it was up more than 500%.

I'll also discuss the portfolio management aspects of this investment, including why I just sold 80% of the position – and how I reconcile that decision with my oft-repeated admonition to "let your winners run."

Lastly, I’ll share some thoughts on how I’ve been investing in my personal account since I launched Empire two-and-a-half years ago. Who knows? I might even name some of the other investments in my account and why I own them...